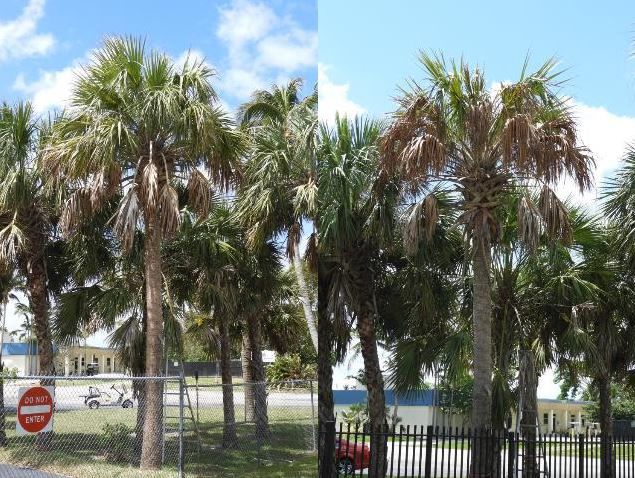 Side-by-side photos of this sabal palmetto show the progression of lethal bronzing over three months. In the photo on the right newer fronds are affected and the “spear” leaf — the new frond that rises up from the center of the tree — has collapsed. The tree will die because it can’t produce any new fronds. 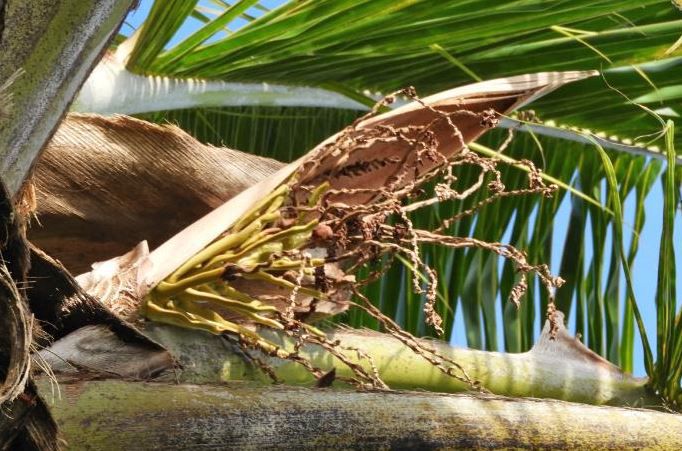 Side-by-side photos of this sabal palmetto show the progression of lethal bronzing over three months. In the photo on the right newer fronds are affected and the “spear” leaf — the new frond that rises up from the center of the tree — has collapsed. The tree will die because it can’t produce any new fronds.

A palm tree disease has a new name that more accurately states its effect on the plants: lethal bronzing.

There’s no cure. Most often an infected tree will be a goner within six months.

Formerly called Texas Phoenix palm decline, the disease is known to attack 16 species of palm trees found in the state and has been identified in 31 counties, including DeSoto, according to University of Florida, Institute of Food and Agricultural Sciences publication PP243, released in May.

That’s four more species and eight additional counties than in an earlier report. And it’s expected to spread, due to the planting of palm trees along the state’s interstate highways.

It appears mostly from Central Florida south but it has also been found in Bay County, in the panhandle, and Duval County due east, on the Atlantic coast.

It was first identified in Florida in Hillsborough County in 2006. Two years later it was only present in three counties, including Sarasota. Now it’s in nearly half of them, including DeSoto County.

The original name reflects the initial detection of the disease in Texas and its appearance on palms in the Phoenix category of palms, which includes the Canary Island date palm and the pygmy date palm.

The new name, city of Venice arborist Jim Yelverton joked, might have come about because Texas doesn’t want to be associated with it.

Still, Texas, Louisiana and Florida are the only states in which it has been found. It’s also in Mexico.

The cause of the disease is known: a bacterium called phytoplasma that’s similar to, but distinct from, a bacterium that causes lethal yellowing, another disease that’s devastating to palms.

“It gets into the vascular system of the palm and just chokes it to death,” Yelverton said. “There’s not much you can do.”

What’s not certain is how the bacterium gets to the palm tree.

According to a Florida Department of Agriculture “Pest Alert,” scientists suspect three types of planthopper insect that feed on sap and are routinely found on palms where the disease is spreading. They haven’t yet pinpointed the culprit, though the palm cixiid is a likely candidate.

In an article from the Emerging Pathogens Institute at the University of Florida, researcher Brian Bahder compares transmission of the disease by the planthopper to the way a mosquito picks up malaria from an infected host and injects it into an unsuspecting victim.

Yelverton said the symptoms of lethal bronzing are common to other diseases that affect palms, including wilting fronds that lose their green color (they turn reddish-bronze) and less fruit or premature dropping of fruit.

“Palm diagnosis is a tricky thing,” he said.

The way to confirm the disease, he said, is by having tissue samples tested. Unfortunately, by the time symptoms appear and test results come back, the tree is too far gone to have a chance to survive.

According to the IFAS publication, the only way to manage the disease is to remove infected trees, whether or not they’re showing symptoms, because the dosage rate of antibiotics isn’t enough to reverse it before symptoms do develop.

“[U]pon symptom development and/or a positive test result, a palm is considered lost and should be removed immediately to reduce the amount of time this source of phytoplasma exists in the environment,” it states.

Any palms in the area that are disease free can be injected with oxytetracycline as a preventive measure. The process involves drilling a hole into the tree and inserting a valve through which the drug can be administered via syringe.

A kit that contains 30 doses and all the necessary equipment except for a drill costs $72 at PalmTreeSaver.com, which says it’s “the exclusive providers of OTC Tree Injection Formula and the patented Tree Saver Injection System. ...”

Healthy trees should be injected three to four times annually, it says.

"As the disease becomes more established in Florida and spreads further south into areas with higher palm diversity, the host range could expand," an IFAS publication notes.