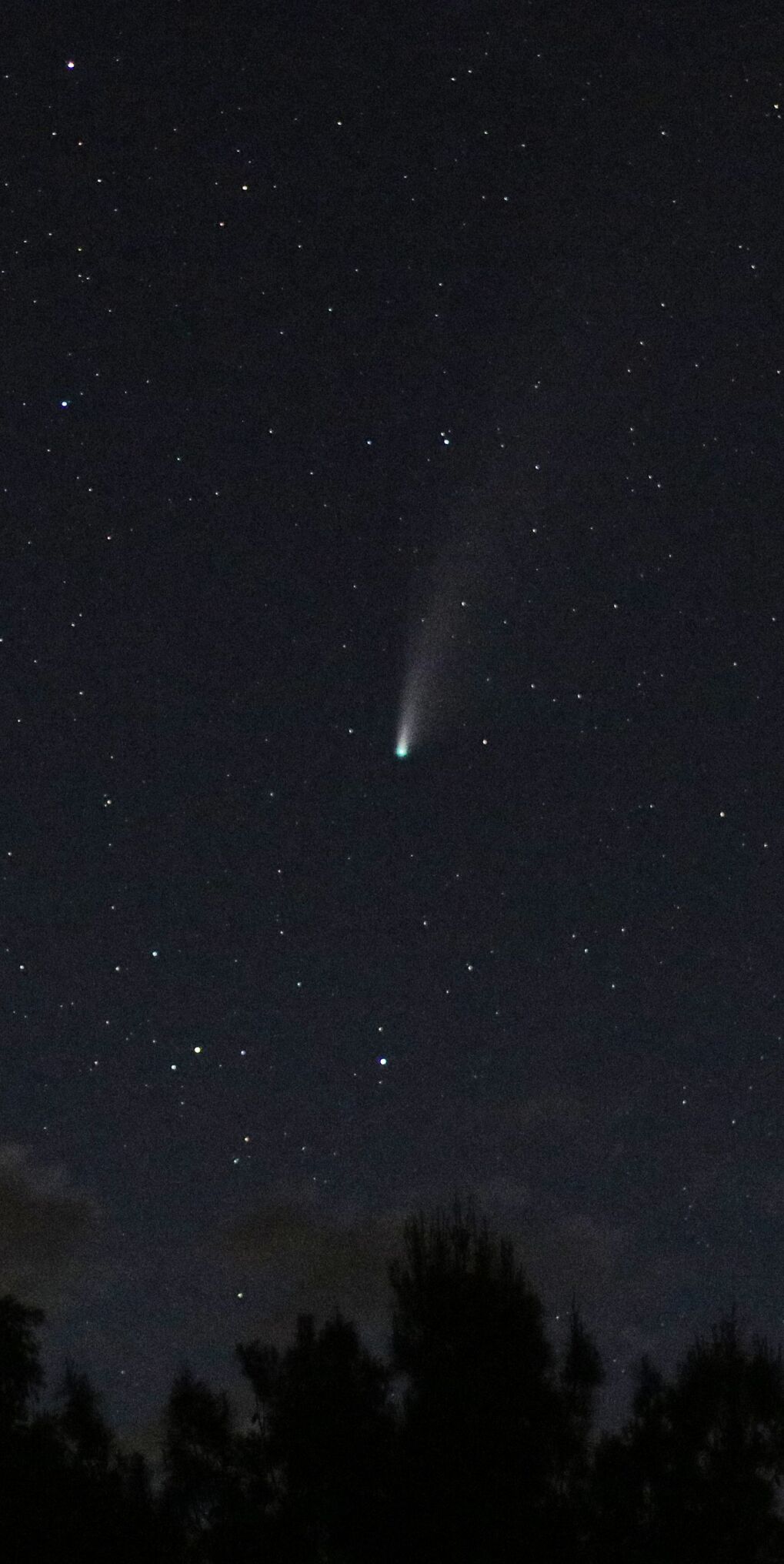 Comet Neowise one day before perigee, or its closest point to earth, on July 22. 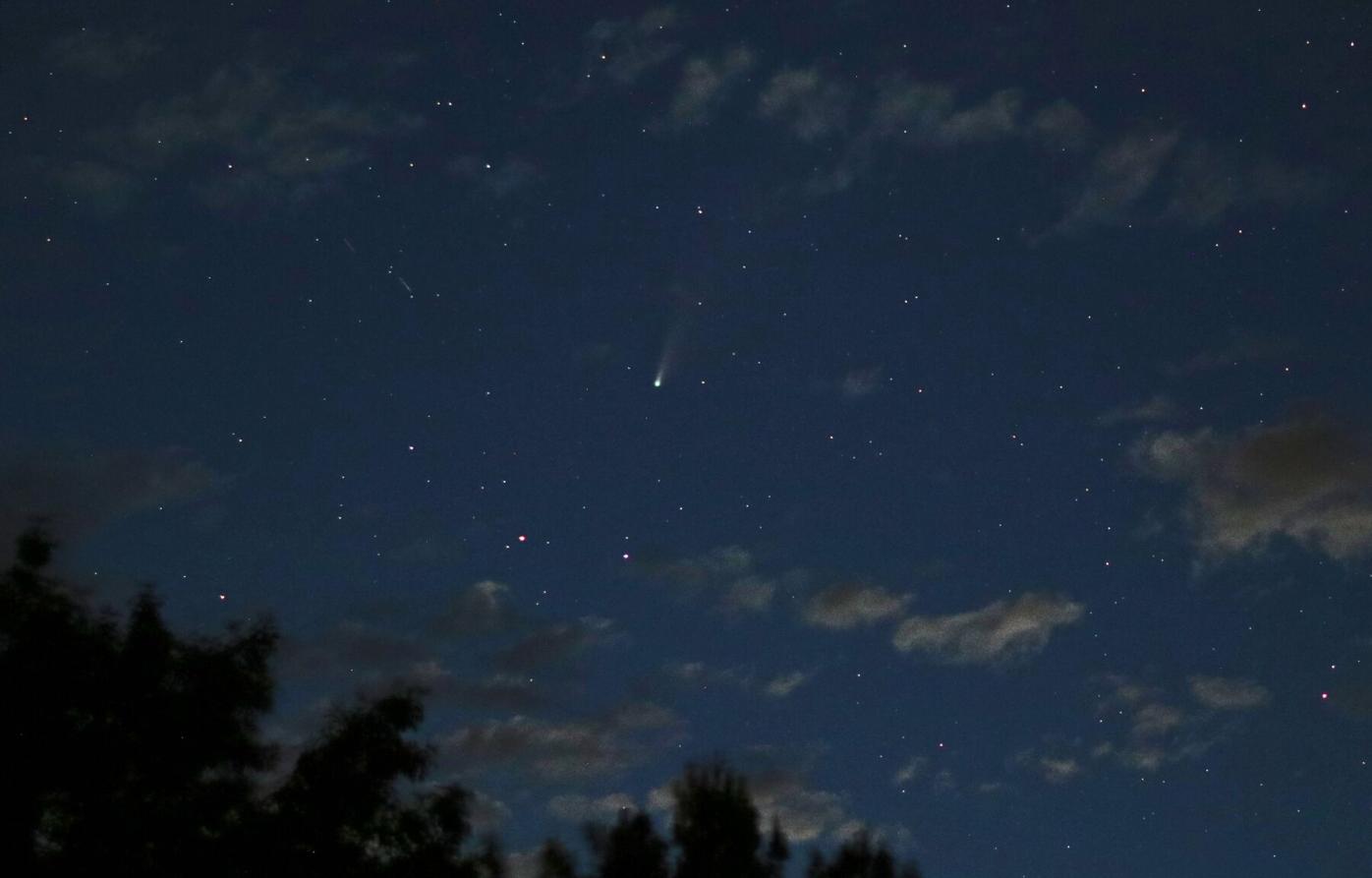 Another view of Comet Neowise on July 22. Its closest pass was about 64 million miles from earth.

Comet Neowise one day before perigee, or its closest point to earth, on July 22.

Another view of Comet Neowise on July 22. Its closest pass was about 64 million miles from earth.

SEDONA — As predicted, the wonderful visitor Comet Neowise became circumpolar and is visible in both the morning and evening sky.

The comet passed closest to the earth on July 23, or what in science is known as perigee. This near-earth approach brought Neowise to 0.69 AU (astronomical units) from our planet, 103.5 million kilometers, or 64.4 million miles.

But now Comet Neowise is heading out of our solar system into the darkness of space. It will return in about 6,800 years, if all goes well.

In my life I have had the opportunity to photograph some 11 comets, some great, some not so great. But as I often have said, astronomical events are what we make of them!

I must say my favorite comets have been Hyakutake, Hale-Bopp, Pan-STARRS and Lovejoy. Eleven comets in some 35 years of watching the sky. I do not regret taking the time or making the effort to see any one of them.

Starting in 1985, my grandmother told stories about when she was a little girl witnessing Halley’s comet, as she called it. This intrigued me to buy my first telescope, an 8-inch Newtonian that was considered quite large back in the day. As luck would have it, I waited about a year for this telescope after placing my order. This turned out to be a good thing, as I read everything I could find about astronomy. Astronomy magazine became my constant companion, reading it cover to cover in the forest preserve at lunch at work. And looking up every word I did not understand while at home. All this prepared me for the arrival of Halley.

This worked out well, as when the world’s most famous comet reached perigee on April 9, 1986, I was in the right place at the right time (Sugarloaf Key, Fla.) to make an image that would win an award from Astronomy magazine! This would be my inspiration for a lifetime of astronomy.

Now with the arrival of Comet Neowise, I know many others will be inspired to buy telescopes and maybe cameras. That’s great! But I caution those who are considering equipment purchases to take the time to first study the areas of astronomy that interest you the most. In this way you will spend your money wisely and when you get it you will have an idea of how to use and care for it.

Comet Neowise is a very popular subject for photographers, many rushing out and buying equipment they thought they might need without researching what this hobby is all about.

Those who do not consider things like lack of sleep, bugs or cold may soon find expensive equipment for sale (a good deal, sometimes, for those starting out). I love used equipment because with a little TLC it can often be brought up to snuff at a great price. After a popular well-advertised event like this one, the market is often flooded with fine used equipment purchased by folks who did not fully understand what they were getting into. Like any artist, a certain amount of suffering goes hand in hand with their craft. This is no different for the amateur, or gentleman astronomer, a term I prefer.

Venture out into the darkness of a night to behold this marvel of our universe and be inspired by this frosty visitor from the distant Oort cloud. But there will be other comets and other astronomical events to witness. Preparation is the key, and knowing just what events capture your imagination the most will guide you!

And know this is an outdoor hobby that will put you in all kinds of unpleasant conditions ... but this is what we must do, as the clockwork of the universe waits for no one!

When was NEOWISE first discovered? Comet C/2020 F3 (NEOWISE) was discovered on March 27, 2020 — not from earth’s surface — but from by a space observatory some 326 miles (525 km) above earth’s surface. It’s named for its discoverer, the Near Earth Object Wide-field Infrared Survey Explorer, aka NEOWISE, which was launched by NASA in 2009.

Comet NEOWISE was closest to the sun on July 3, 2020, passing at about 26.7 million miles (43 million km) from the sun, or a bit closer than the average distance from the sun to Mercury. Unlike some comets, it survived the close encounter with our star and went on to become widely seen by binocular observers and astrophotographers.