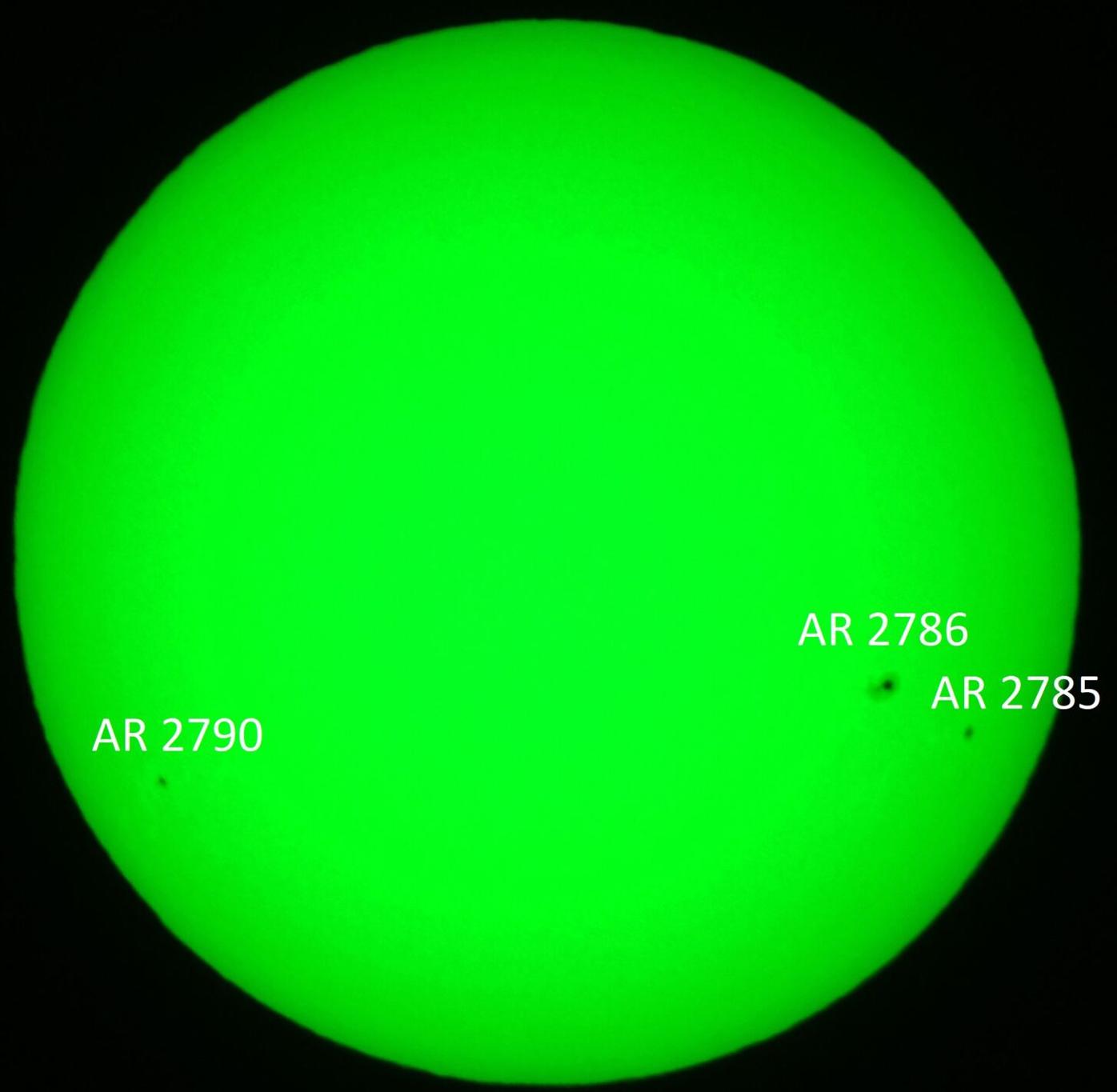 Our solar disk is peppered with Southern Hemisphere sunspots on Dec. 2, 2020. 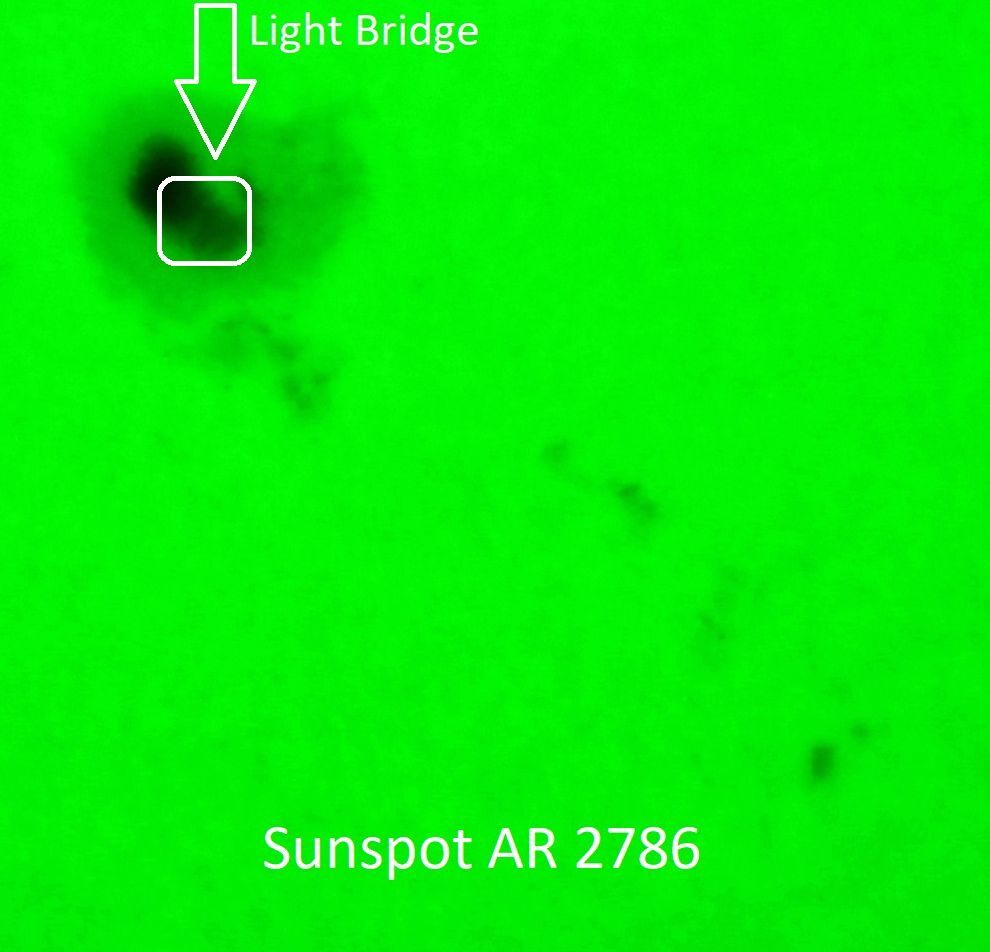 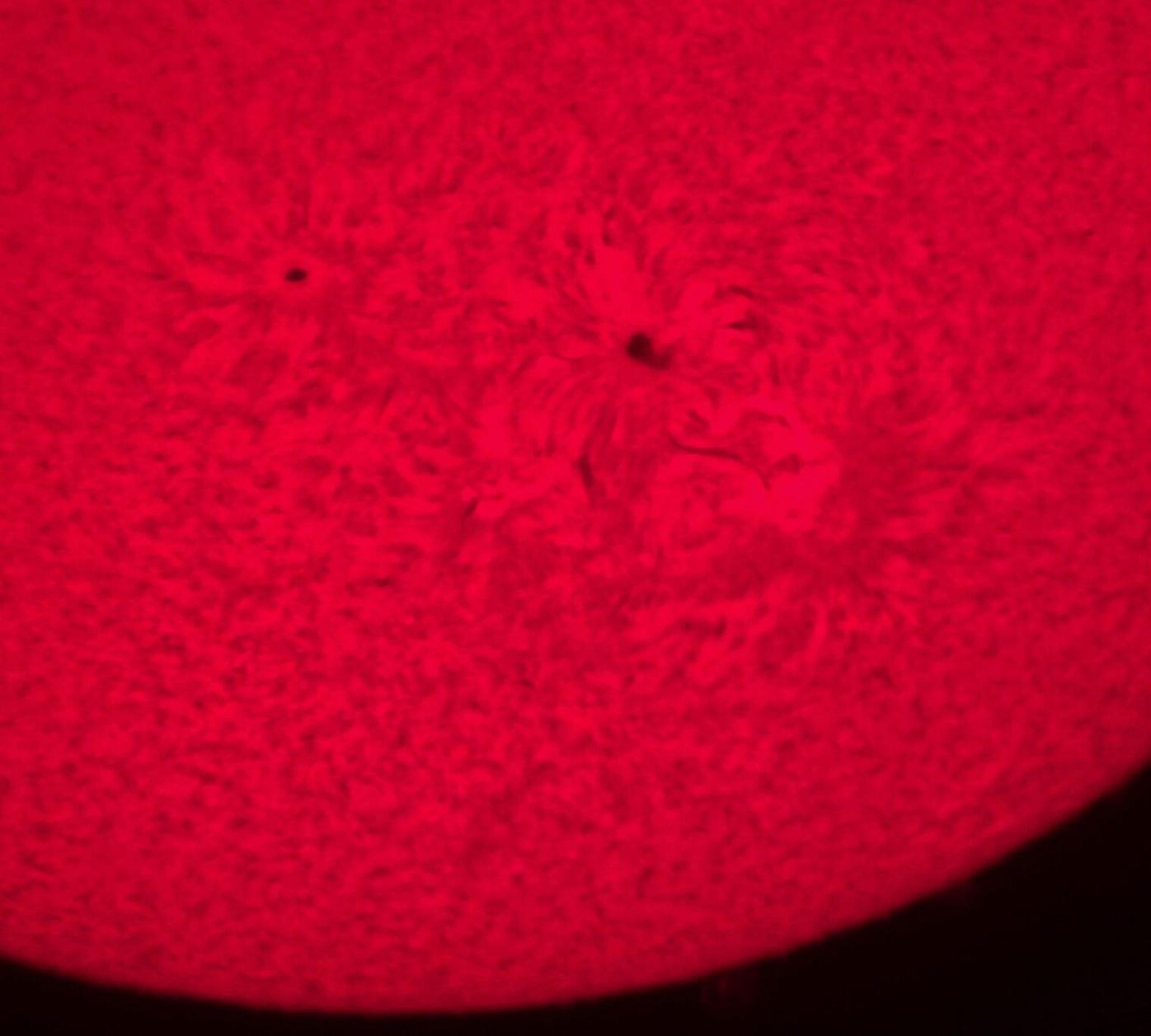 Our solar disk is peppered with Southern Hemisphere sunspots on Dec. 2, 2020.

SEDONA — After years of a solar minimum where few sunspots were observed, the sun seemed to awake with the emergence of several sunspots.

All of these sunspots were found to belong to the new solar cycle No. 25. We know this because of their -/+ polarity. The biggest sunspot in this new solar cycle was called AR 2786.

And it is indeed a large one — the core of AR 2786 is in itself three times the size of the earth!

This made it an easy target for amateur backyard solar telescopers. NASA’s STEREO-A spacecraft first saw it on the far side of the sun. Then a short while later it rotated onto our side of the sun, seen first on the sun’s eastern limb. This was on Nov. 23, when I first saw and photographed it.

Upon AR 2786’s arrival, it was quiet and calm ... aside from flaring a bit. This did not last very long, however, as this sunspot began to grow even larger. By Nov. 26, C class solar flares were predicted to erupt from it. These are medium sized and can cause short-wave radio blackouts in some parts of the world.

Not only did AR 2786 grow in size, it developed a train of small trailer spots. These were also easily observed by backyard astronomers.

Then as AR 2786 traversed the solar disk, observers around the world noticed something common in large sunspots; a pair of light bridges came into view. This might indicate the demise of this huge sunspot, a sign that it might be breaking apart. Science does not yet fully understand the nature of light bridges, other than they sometimes signal the end of a sunspot’s life.

These light bridges were also quite large, about the width of the earth and some 15,000 km, or 9,300 miles, long! Light bridges crisscross and reconnect, excited energy that also creates solar flares. So this was a sign that AR 2786 might be ready to explode with a massive eruption.

I followed AR 2786 every morning for days to see what it might do. But it remained quiet and still until it vanished behind the solar disk on Dec. 6.

The sun is of course our nearest star, and this gives us an opportunity to study up close the workings of a star. And some scientists suggest sunspots have a direct influence on our weather here on earth. By understanding sunspots, their development and their effect on us, we better understand our changing climate.

I used two telescopes to observe the sun these past few days; one was my home-built 103mm Jaegers refractor, safely filtered by a Baader Planetarium solar safety prism — my favorite for sunspots — and a 100mm Lunt hydrogen alpha refractor.

Hydrogen alpha telescopes are very special (and expensive). They work by letting only red hydrogen-alpha light pass through, rejecting all other wavelengths.

And since hydrogen is the most common element on the sun, this telescope can show us some of its most spectacular features! This is the only object this expensive telescope can see, our sun! These are very special telescopes I use to view and photograph the sun.

Solar observation must be handled with great care to prevent damage to your eyes ... or even blindness. Glass or mylar over-the-aperture filters work very well and are the least expensive way to view the sun. Good ones are sold by Thousand Oaks or Baader Planetarium.

Please be absolutely sure of what you are doing with solar study or be with someone who does, as this is one of the few ways a person can really get hurt in the field of astronomy.

Years ago when first starting out with solar photography, I burned holes in the shutters of a couple of Olympus cameras not properly filtered. The camera repair shop guys told me that they could smell my burned camera for days while they waited for replacement parts.

Lesson learned ... and a great respect for the power of the sun was gained that day.