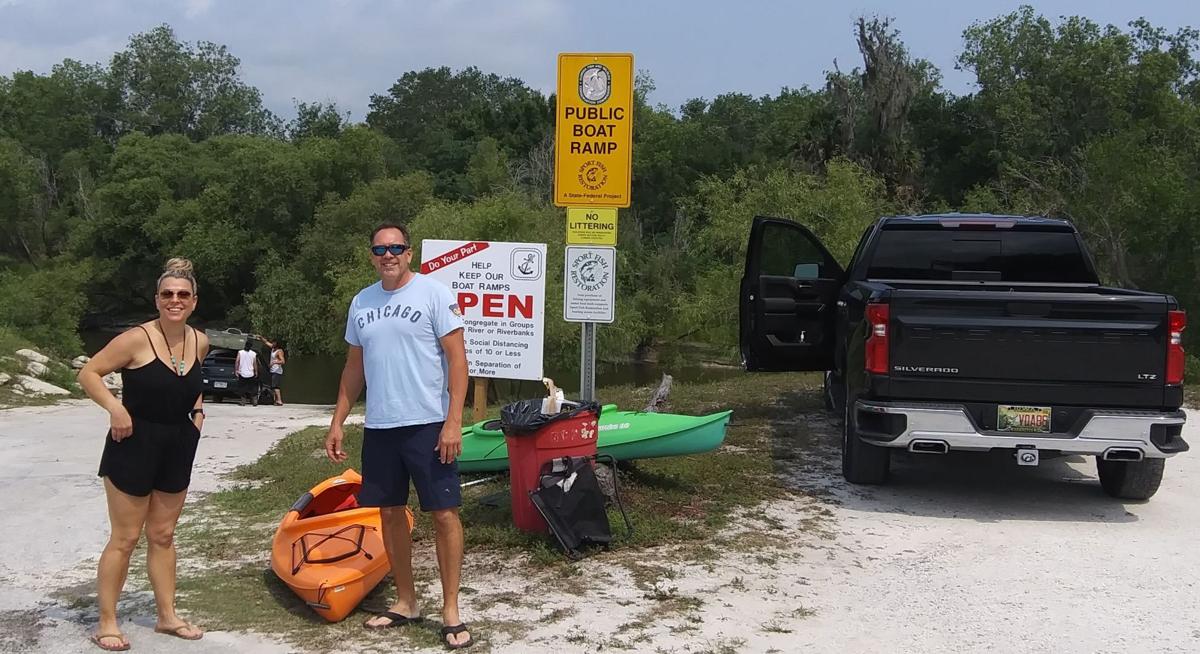 Folks wait for others to clear the boat ramp before launching their kayaks. A sign cautions to observe the proper social-distancing and leave a space between vehicles. The boat ramp at Veterans Park is open, as are ramps at Nocatee Boat Ramp, 3701 SW County Road 760; Lettuce Lake Park, 8801 SW Reese Street; and Liverpool Park, 9211 Liverpool Road. Only the ramp at Brownville Park, 1885 NE Brownville Street, is closed.

The historic Peace River Bridge is undergoing a much needed top-to-bottom makeover. The bridge will be the crown jewel in a chain of links that comprise a loosely joined network of multimodal paths, trails and bike lanes that connect parks, residential areas and commercial areas.

Folks wait for others to clear the boat ramp before launching their kayaks. A sign cautions to observe the proper social-distancing and leave a space between vehicles. The boat ramp at Veterans Park is open, as are ramps at Nocatee Boat Ramp, 3701 SW County Road 760; Lettuce Lake Park, 8801 SW Reese Street; and Liverpool Park, 9211 Liverpool Road. Only the ramp at Brownville Park, 1885 NE Brownville Street, is closed.

The historic Peace River Bridge is undergoing a much needed top-to-bottom makeover. The bridge will be the crown jewel in a chain of links that comprise a loosely joined network of multimodal paths, trails and bike lanes that connect parks, residential areas and commercial areas.

ARCADIA — Work on the historic Peace River Bridge is nearing completion. Replaced by the present State Road 70 bridge in 1961, the historic bridge was closed to traffic in 1985. Construction of the bridge began in 1924 by the Luten Bridge Company of York, Pa., and Palatka, Fla., at a cost of $2,500. The bridge was completed in June 1925.

Owned by the state, it now serves as a pedestrian/bicyclist bridge between two county parks — Morgan and Veterans.

Peace River and the old bridge are icons of our community. The DeSoto County Chamber of Commerce, Discover DeSoto, as well as several local businesses, use a bridge image or blue swirl in their logo. Peace River is DeSoto County's greatest natural resource. The DeSoto Art Center has donated images of the bridge to both the city and the county, and it is wonderful to see the bridge getting the attention it deserves.

On any given day, even during construction, you will see people using the bridge and paths, though both parks are technically closed due to the COVID-19 risk. American Legion Drive provides access just east of the overflow bridge. The boat ramp is open. A sign cautions to observe the proper social-distancing and leave a space between vehicles.

Parking is along the roadway, adjacent to the riverbank, or along the shady shell lanes that wind through the park. There are a few picnic tables and benches, and on the north side of the road a concrete path winds along the riverbank. There is plenty of room to observe social-distancing. Remember your social group should be only those people in your dwelling unit. If one or more members goes outside the home to work or shop, remember that they bring back the potential of infection, and frequent hand and face washing as well as avoiding close contact are the best ways to limit disease transmission.

When the Florida Department of Transportation completes the bridge rehab, the city of Arcadia will maintain the historic structure, including lighting that will be similar to the original. The estimated cost of the project is $1.2 million. The bridge will be the crown jewel in a chain of links that comprise a loosely joined network of multimodal paths, trails and bike lanes connecting parks, residential areas and commercial areas.

Linking the existing infrastructure doesn't have to be costly. Simple steps such as identifying safe connecting routes within Arcadia with bike route signage, unifying signage and existing bike lane markings, and encouraging pedestrian/cyclist friendly development, will go a long way toward building a safer community.

DeSoto County has good potential as a pedestrian and cycling friendly community. The Peace River pathway is part of a core framework of ped/bike infrastructure consisting of the bike lanes on US Highway 17 providing north-south travel; and a multimodal path along State Road 70 from Toby's RV Park to the shopping center at intersection of Turner Avenue and SR-70, providing east-west travel. The path is regularly used by 1,500 to 2,000 households. Recent and ongoing pedestrian crosswalk improvements on both US-17 and SR-70 provide increased safety to both pedestrians and cyclists.

Education outreach to increase driver awareness of pedestrians and cyclists and efforts to teach cyclists rules and responsibilities of riding through messages on social media, print and news media messages, can have a lasting effect on reducing traffic injuries and deaths. Development of a countywide cycling map and safety brochure, and outreach efforts by law enforcement and other agencies, are other low-cost tools to foster safety awareness.

The need for connectivity of this web and adequate pedestrian sidewalks and bike paths for recreational and serious bicycle riders was recognized in the county's Comprehensive Plan Recreation and Open Space Element (ROSE), dated 10/17/2013 (desotobocc.com). The dream of a riverwalk and improved, well-lighted river access was also expressed in the DeSoto County Long-Term Recovery Plan, www.hsdl.org.

DeSoto County schools and neighborhoods around Arcadia could be connected by a pedestrian/bicycle network of sidewalks, bike lanes and or trails. According to the report: "The County should continue to explore the shared use of easements such as electrical utility lines, gas lines, abandoned rail corridors, and water management canals for trail purposes. Funding for such projects [is available through] the Rails-to-Trails Conservancy (RTC), as well as the National Transportation Enhancements Clearinghouse (NTEC)."

There is a program called Rails with Trails that enables trails along still in use right-of-ways.

The existing railroad right-of-way, which is owned by CSX, could connect Arcadia to Charlotte County roughly following the Peace River. This could become an ideal greenway between Arcadia and the explosive growth expected in the southwest corner of the county. The right-of-way also continues north of Arcadia into Hardee County roughly along County Road 661. A greenway could potentially connect one side of the county to the other along scenic farmland and the banks of the Peace River. Thus a safe and effective system of connecting people with Arcadia’s business core, community focal points, parks and distant neighborhoods could be realized.

The county should encourage the state to lengthen the existing state bike path along 1.7 miles of SR-70. It now runs from the Winn Dixie shopping center east to Toby's RV Park. If continued west past Townsend Avenue, the trail could connect existing neighborhoods with downtown Arcadia. Although the state maintains the grass and signage along the trail, no jurisdiction is maintaining the trail itself, and the surface of the east segment is in need of repair.

Interest in cycling for both recreation and transportation has surged, and not just since the COVID-19 pandemic. Cycling is the fastest growing outdoor activity, with many health- and fitness-conscious adults taking it up. The great variety of cycles available — including recumbent bikes and trikes, that may include electric-assist — has opened cycling to many who may have never ridden a standard bicycle. It's estimated that 48 million people bicycle recreationally annually, contributing $96.7 billion per year to the economy, according to the Outdoor Industry Association.

As coastal areas become more developed and crowded, our rural roads with low vehicular traffic will become more attractive to residents and visitors. People who live close to walking and bike routes are significantly more active and more healthy.