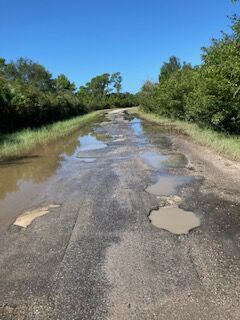 Southwest Kingsway Circle is an old road shared by Charlotte and DeSoto counties riddled with deep potholes, according to residents. 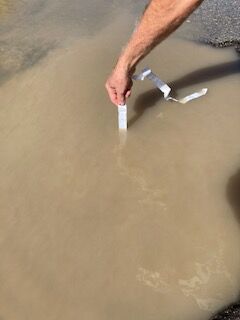 The potholes on Southwest Kingsway Circle are several inches deep in some places.

Southwest Kingsway Circle is an old road shared by Charlotte and DeSoto counties riddled with deep potholes, according to residents.

The potholes on Southwest Kingsway Circle are several inches deep in some places.

That has some big upside for residents who use a pothole filled half-mile stretch of the private road Southwest Kingsway Circle.

The letup will give Ted Boiman and his all-volunteer road crew of residents who live on a DeSoto County portion of the road dry conditions they need in filling and patching the holes.

Another upside: The several hundred residents of the DeSoto County portion can join with their 11 Charlotte neighbors to create a taxing district to fix and maintain the approximately 2,500 feet of crumbling roadway.

Why can’t Charlotte County send a crew out to fix the bad stretch of road situated entirely in the county? That would be illegal, as emphasized in a 1992 legal opinion from then-attorney general Bob Butterworth.

“The county may not expend county funds to repair and maintain private roads,” Butterworth wrote in an opinion on whether Hamilton County could fix a private road to enable school buses to use it.

“It is a basic tenet that the expenditure of public funds must be primarily for a public purpose,” Butterworth added.

The $1 million fix mentioned by Charlotte County Public Works Director John Elias would be shared by all of the residents, including the several hundred on the DeSoto side whose high-end homes Boiman says are worth $500,000 to $1 million. One home has an aircraft landing strip, he said.

An inter-jurisdictional municipal services taxing district is not entirely new to Charlotte County. It has one with Sarasota County for Winchester Boulevard on the western end of the county to maintain the highway as a hurricane evacuation route, said Brian Gleason, the Charlotte County spokesman.

“The county is working with the residents to see if they want to set up a taxing district,” Gleason said of Southwest Kingsway Circle. “We would do the repairs.”

This would include any necessary fixes, resurfacing and drainage work to ensure the integrity of the roadway, Charlotte officials say.

The taxing district idea has been posed before, but to no avail.

The effort to gain 51 percent approval suffered from the seasonal status of around 30 percent of the residents.

Boiman said it seems the homeowners are frustrated and have thrown up their hands in despair.

“They say it is a waste of time to get involved,” he said.

But Boiman said he and others are knocking on doors in hopes of changing minds.

That’s a strategy Elias endorses. More participation from the 300-plus homeowners on the road’s DeSoto side could kick-start efforts to make the half-mile portion of road one of Charlotte’s 50 or so municipal service districts, he said.

After all, “they are using the road,” Elias said.

Alternatively, the DeSoto residents can take a two-mile detour to reach Kings Highway. Something should be done, Elias said of the half-century-old Charlotte portion of Southwest Kings Circle.

“The road is at the end of its useful life,” he said.

He estimates the DeSoto part of the road is a far younger 30 years old, having been added when builders began putting up the DeSoto homes many years after the developers of the Charlotte side abandoned their residential project.

If not repaired, the Charlotte road could make motorists feel like they are failing off a cliff as they hit the holes, Elias said.

“Once a pothole starts, it will just blow up from there,” he said.

The main challenge is that the portion of Southwest Kingsway Circle that lies in DeSoto County has been publicly maintained by DeSoto, said Mandy Hines, county administrator, in an email.

Hines agreed with Elias that the solution rests with a grassroots willingness to move forward on making the road permanently passable.

“DeSoto County remains open to working toward a solution; however, we cannot directly fund or perform work on a roadway outside of the county,” she said.

Neither Hines nor Elias has heard concerns about emergency vehicles getting in and out of the neighborhood. The fire-EMS departments from both counties have mutual aid agreements for the Kingsway Circle neighborhood. They can get through the washed-out stretch, Elisa said, adding emergency vehicles traverse far worse roads around Charlotte County.

“We have roads that make this look like the Autobahn,” he said, referring to Germany’s high-speed highway system.

Boiman and his clandestine road crew, who mostly do their work at night, have considered cutting a drainage trench alongside the road in hopes of getting water off the road. Elias warned against doing that.

“I wouldn’t recommend they try to convey water,” said Elias, who has been with Charlotte public works for over 30 years and is accustomed to addressing “legacy” problems from the hundreds of miles of private roads to nowhere remaining from Charlotte’s land boom of over a half century ago.

Doing the drainage fix incorrectly could cause “a lot more issues than trying to get water off the road,” Elias said, citing a possibly that a motorist could hit pooling water caused by drainage work and spin off the road.

Liability could rest with the people who made the road alterations, Elias warned.

But Boiman said he wonders whether he and his DeSoto neighbors already have legal exposure.

“Who do you think would be sued if a traffic fatality occurred due to potholes?” he asked. “Do the DeSoto residents understand their potential liabilities due to Charlotte County road responsibilities?”

In the meantime, Boiman concedes, “The stuff we’re doing could be outside the law.”