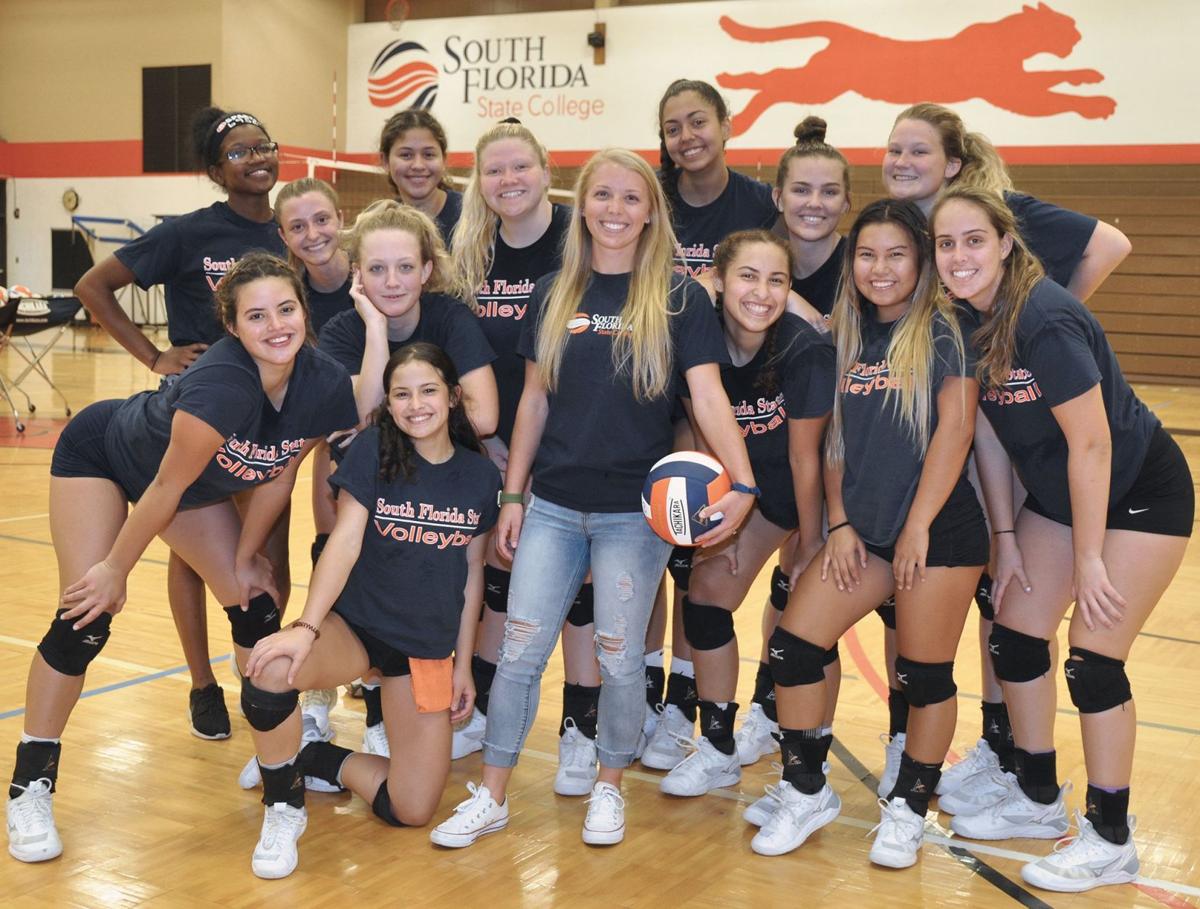 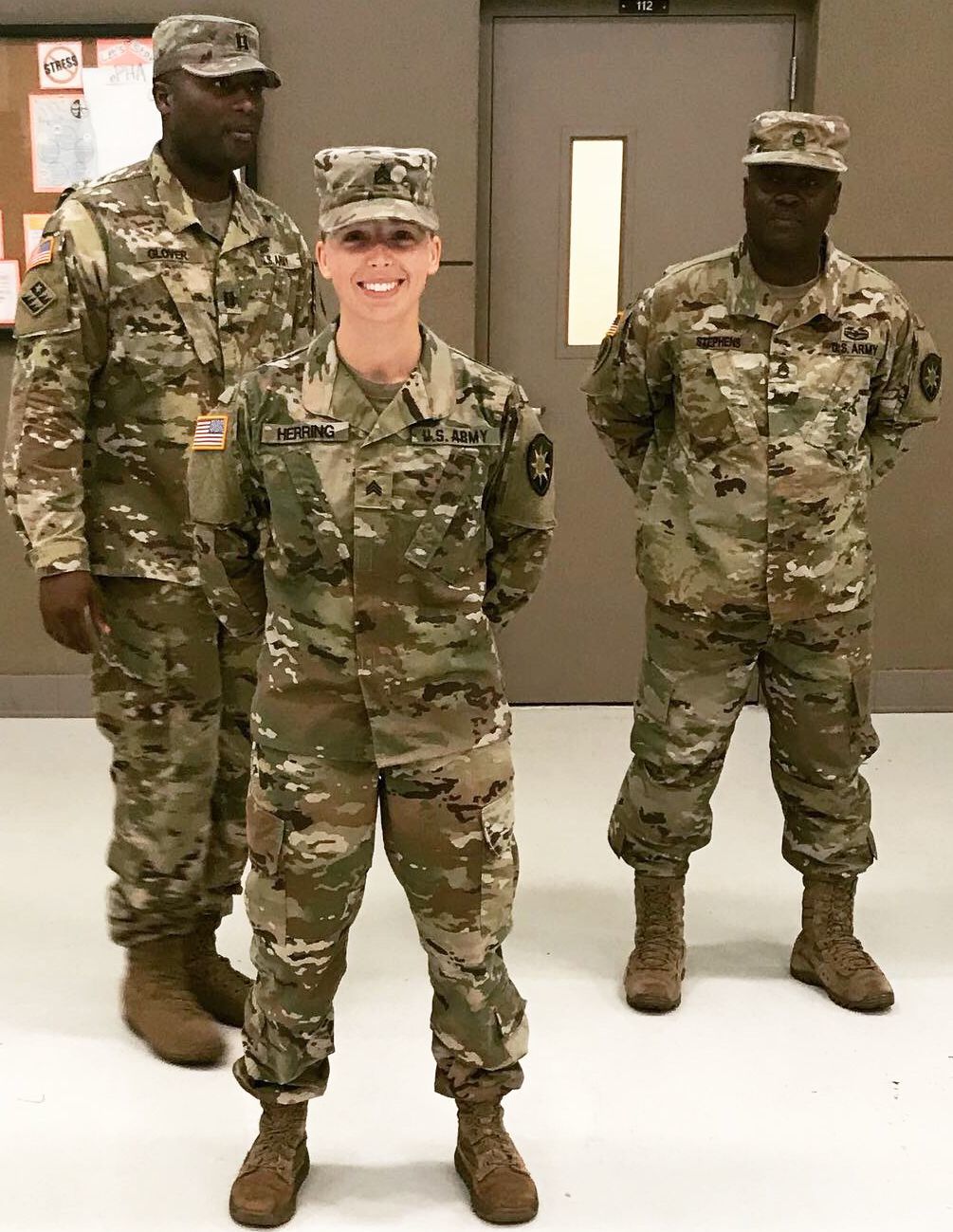 But this year’s celebration took Florida by storm, quite literally. And while Hurricane Dorian continually swirled over the Bahamas, weather watchers seemed unsure about its impact on Florida.

In spite of the uncertainty, Kelsey Herring, a South Florida State College student-athlete, was called to duty on Aug. 30 with her unit of the Army National Guard to prepare for the impending hurricane. Her unit, the 856th Quartermaster Support Company, is based in Arcadia.

Herring has managed to balance college, work and military service. She plays defensive specialist with SFSC’s Lady Panther volleyball team; is working toward her bachelor's degree in Applied Science/Supervision and Management with an emphasis in accounting; works part-time for Lisa Sherman, CPA, in Lake Placid; and serves in the National Guard.

Herring was at volleyball practice when she received the text to report to her National Guard unit. That day her unit reported to Orlando where cases of water and meals ready to eat were loaded onto trucks, just in case Floridians found themselves without supplies following Hurricane Dorian. Herring’s initial mission was to go to Groveland in Lake County and set up a safe place, much like a warehouse, from which to send trucks with food and water to other parts of Florida.

The National Guard has been a part of Herring’s life since she joined in 2014 while in high school. The Kingsville, Missouri, native graduated in May 2015 and left for basic training that June.

Although Herring’s older sister joined the U.S. Air Force and her grandfather was a Marine, Herring said that she doesn’t really come from a military family. “A lot of people ask me why I joined the National Guard,” Herring said. “It just felt like something I wanted and needed to do, so I joined.”

After attending basic training in North Carolina, Herring was sent to her Advanced Individual Training in Virginia. “AIT is where you learn your skill,” she said. “My technical military occupational specialty (MOS) was 92 Alpha, which is an automated logistical specialist, but I’ve never actually done that job.” An automated logistical specialist is responsible for supervising and performing management or warehouse functions to maintain equipment record and parts.

Rather, Herring became a gunner. “The entire time I was in North Carolina, I was in gunnery. So, pretty much of what I do is shoot M240s, M249s, and .50 caliber machine guns.”

“Since I moved to Florida, I started to learn a little more of my actual military occupational specialty,” she said. “During the hurricane, I was the non-commissioned officer in charge. Not only in charge of the site and getting it set up but also in charge of the troops there. Sometimes, part of the job is to make sure there are lodging and contractors to provide meals for the troops.”

Unlike other people who were battening down for the hurricane, Herring spent her time making sure that Floridians would be safe and cared for if the hurricane came their way.

“Some people may say ‘Wow, what a waste of time and money,’ but it wasn’t,” Herring said. “That kind of real training is the best thing you can hope for. We got real life training of what it would be like during a hurricane but without any of the devastation. We were looking out for everyone and everyone was so grateful for us to be there. Even passing us on the road, they felt safer. It’s peace of mind.”

Herring is enthusiastic about the National Guard and recommends that young people look into it. “I would recommend it, especially for people who are younger and don’t know exactly what they want to do with their lives,” she said. “They may want to go to school and don’t have the finances to go to school. That’s why the Guard is so good, because you have the opportunity to go to college. You have state funding and you have federal tuition funding. You also learn discipline which helps with college.”

However, Herring doesn’t think the National Guard is for everyone. “Being in the military takes a certain mentality,” she said. “You can’t just say ‘I don’t want to go.’ You don’t get to call in sick. There are times that you have to set personal things aside. You have to look at the bigger picture and some people just have a hard time looking past that. Or they don’t realize what they signed up for. It’s not a normal job where you can quit and you’re out of the contract. Six years is six years—that’s the time you signed up for and you have to understand that. If you feel like it’s not for you, then in six years, you can take that time and move past it.”

“The opportunities that the Guard has to offer can really benefit people,” she said. “People know the Army, Navy, and other branches of the military but don’t often think about the National Guard. If you don’t want to go full time, there are the National Guard and the Reserves.”

One of the benefits Herring discovered while at basic training in North Carolina was meeting her fiancé, Jacob, who was stationed at Seymour Johnson Air Force Base. Together, they moved to Jacob’s hometown of Lake Placid, Fla. in August 2018.

Herring has her future planned—she’d like to complete her bachelor’s degree in May 2021 and eventually become a partner in the offices of Lisa Sherman, CPA. As for the National Guard, her six years are up in November 2020.