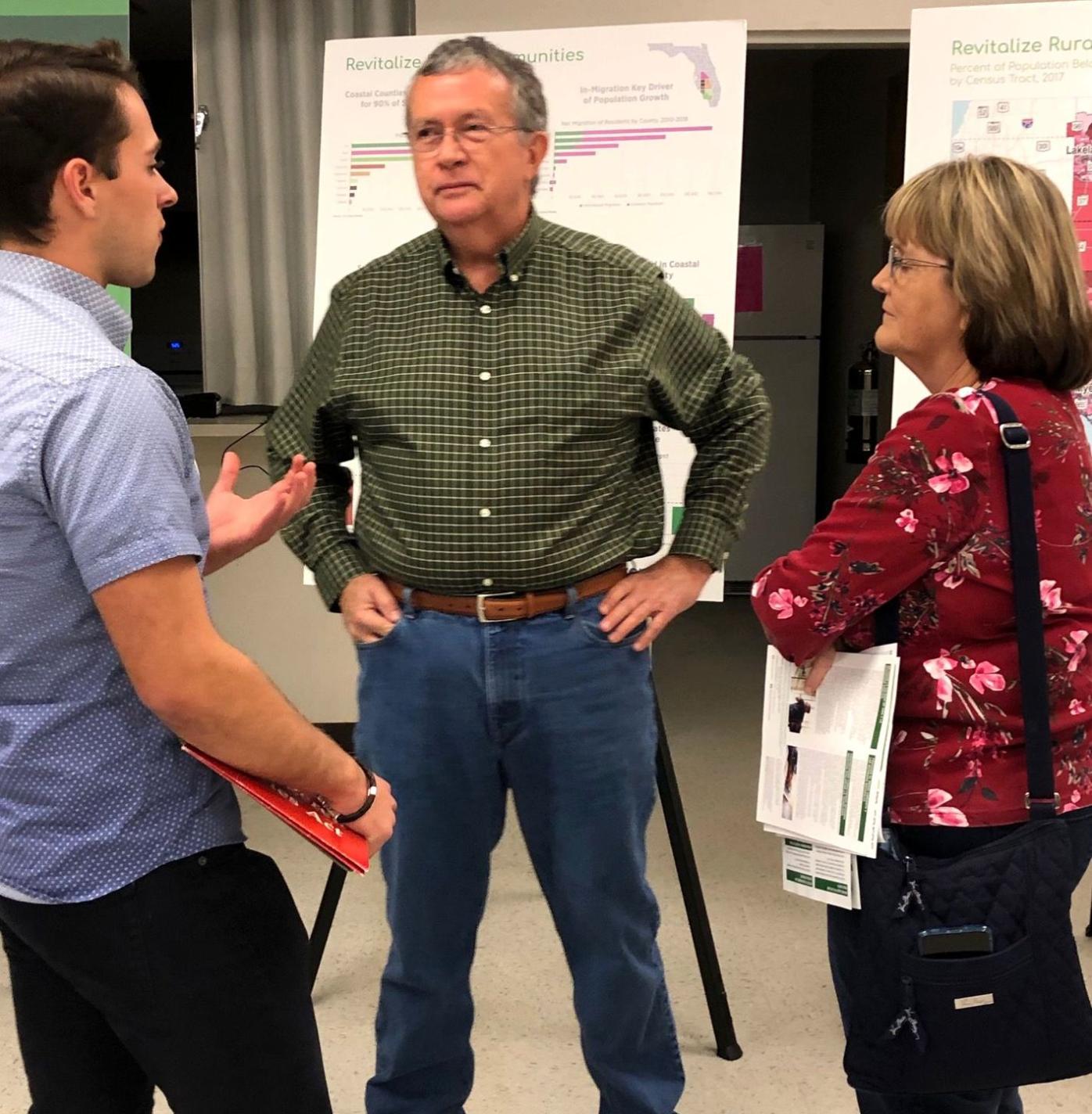 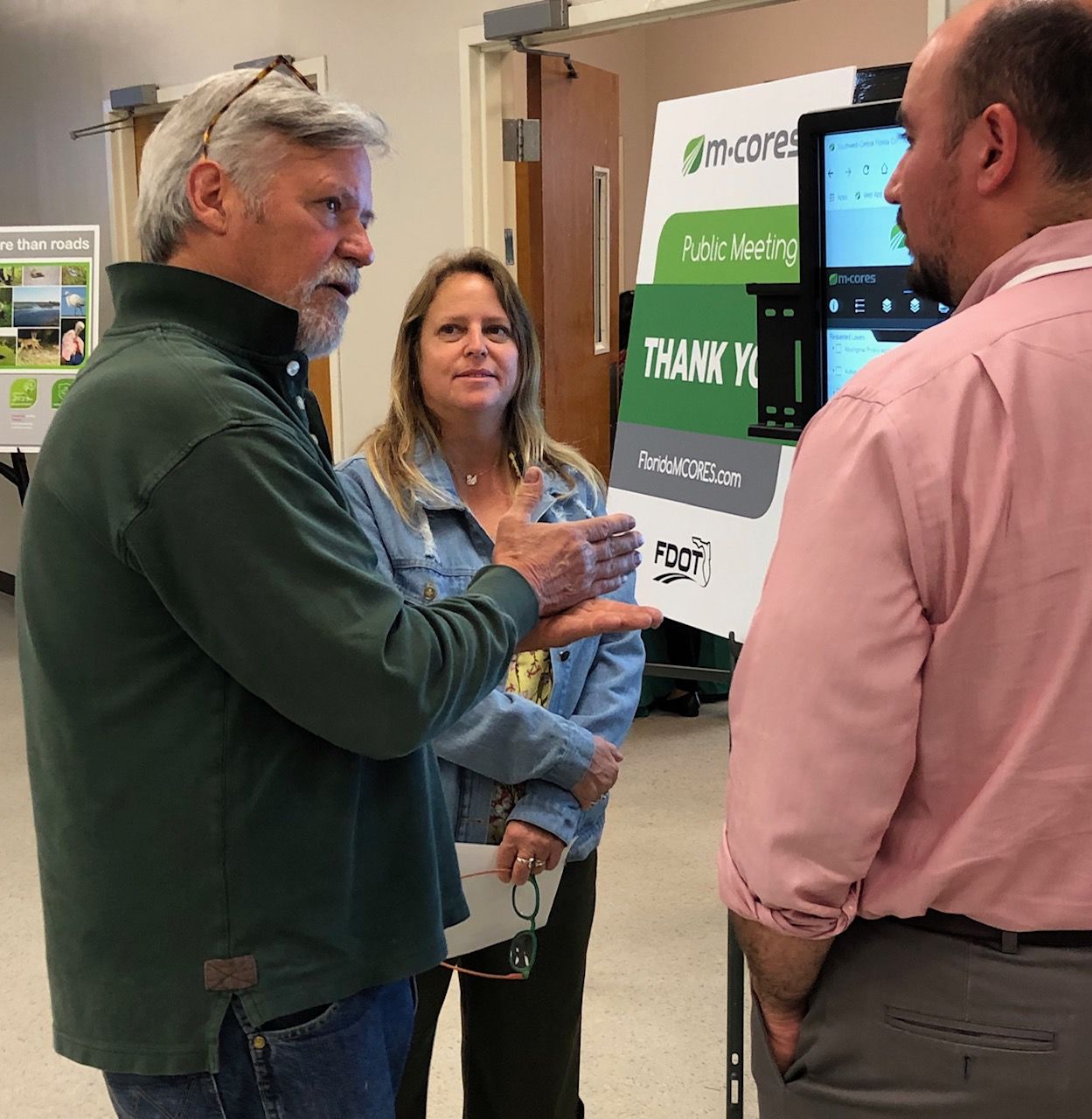 L:eft: David Stevenson and Kelly Forbes of Arcadia share ideas about a proposed 350-mile toll road with an engineering consultant, Chris Piazza. The state Department of Transportation held a public information session in Arcadia at the Turner Agri-Civic Center. 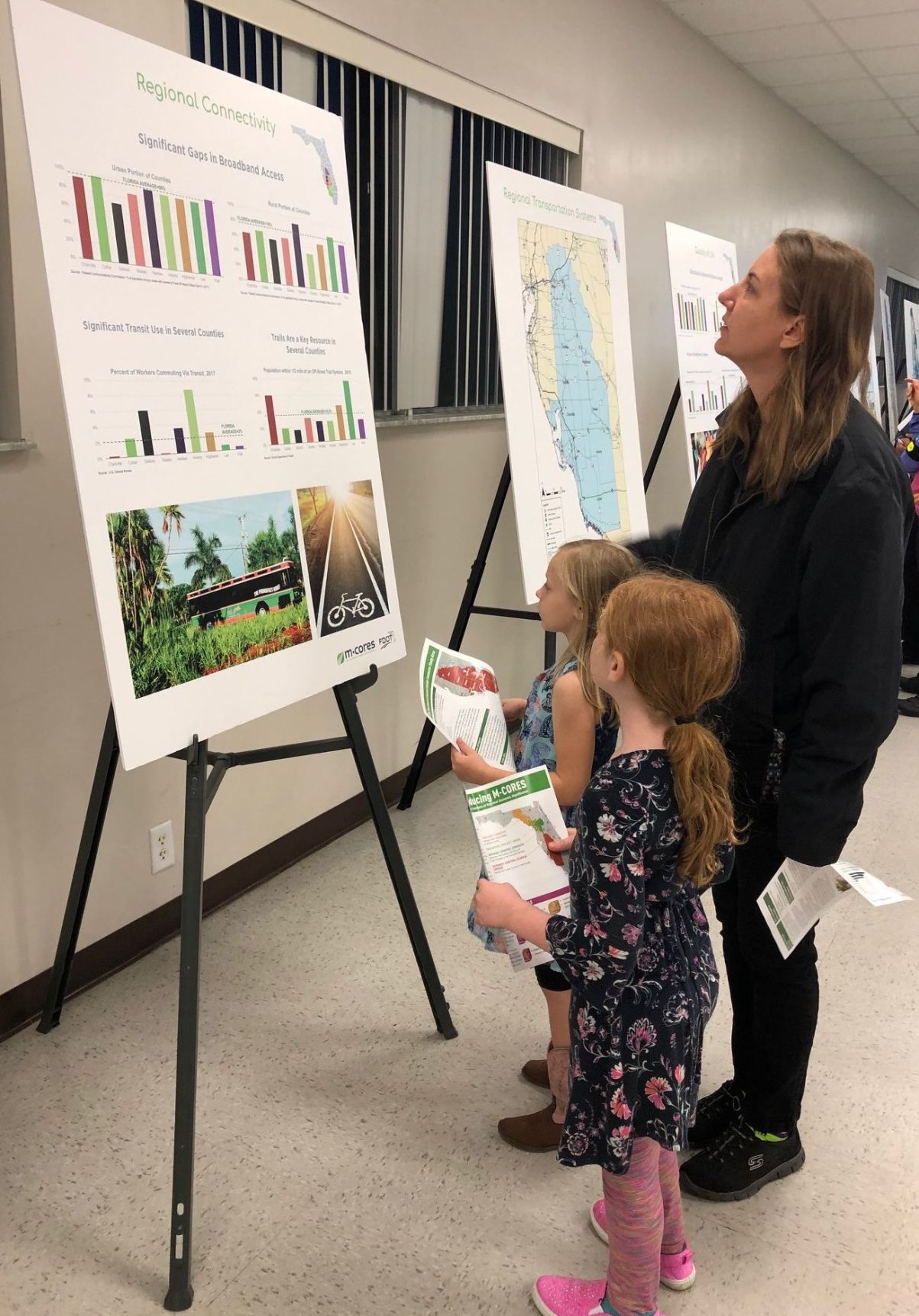 Right: Penelope Collier, 8, and Piper Collier, 6, along with Jessica Wilkes gaze at some pictures and charts illustrating what a new toll road could look like through rural Florida.

L:eft: David Stevenson and Kelly Forbes of Arcadia share ideas about a proposed 350-mile toll road with an engineering consultant, Chris Piazza. The state Department of Transportation held a public information session in Arcadia at the Turner Agri-Civic Center.

Right: Penelope Collier, 8, and Piper Collier, 6, along with Jessica Wilkes gaze at some pictures and charts illustrating what a new toll road could look like through rural Florida.

Transportation experts mingled with locals in Arcadia Wednesday evening to talk about a giant toll road that could run through DeSoto and Charlotte counties on its way to Georgia.

Florida Department of Transportation has not yet identified the so-called alignment of the road, meaning where it would go, much to the chagrin of some task force members. FDOT has acknowledged it may follow existing interior roadways. That does not mean a state road would be turned into a toll road, FDOT spokesman Zach Burch told the Sun. Rather, toll lanes might be added on either side of an existing road, and the existing road would remain free to drive on.

Stevenson also said he sees opportunity for Florida to develop the newest transportation technologies in autonomous or driverless vehicles. And he believes growth will be inland.

“People are starting to get a little more coastal averse,” he said.

Some locals are staying on the fence.

“I think they’ve got too many objectives,” said Karen “Smoke” Smoczynski of Arcadia. “You can’t build a road and save a county.”

Environmental advocates are not thrilled.

“It’s good for the economy. It’s bad for the environment,” said Alan Rivera of Highlands County. “That’s what most worries me.”

“There’s no way they’re NOT going to create subdivisions that will invade habitat for endangered species,” said Michael McGrath, a Fort Myers representative of the Sierra Club.

At least 45 citizens attended the evening session in Turner Agri-Civic Center. It is one of many public sessions Florida Department of Transportation is holding throughout the three corridors. Also, three state appointed task forces that have been meeting since August.

Called MCORES for the name that no one remembers — Multi-use Corridors of Regional Economic Significance — the project sprung to life this past summer in the Florida Legislature. State Senate President Bill Galvano, who was once the Arcadia attorney according to former city councilor Keith Keene, marshaled a narrow majority for a 350-mile road starting somewhere in Collier County and ending at the Georgia border. The project was promoted as needed to bring economic vitality to the state’s poor interior, to enable the newest technologies, and to allow for population growth away from the state’s crowded and vulnerable coastline.

A section of the coastline, however, is not interior. The Suncoast Connector, north of Tampa, is a corridor encompassing a coastal community with lower population and higher poverty.

Charlotte and DeSoto counties are in the largest, southern-most section called the Southwest Central Florida Connector.

The Legislature authorized $45 million in the first year and $90 million in the second year. The three task forces must present their findings to the governor by October. Construction would begin by the end of 2022, although funding has not been authorized for that. The next meeting of the southern task force will be in Moore Haven, 9:30 a.m.-4:30 p.m. Feb. 13, Doyle Conner Building.