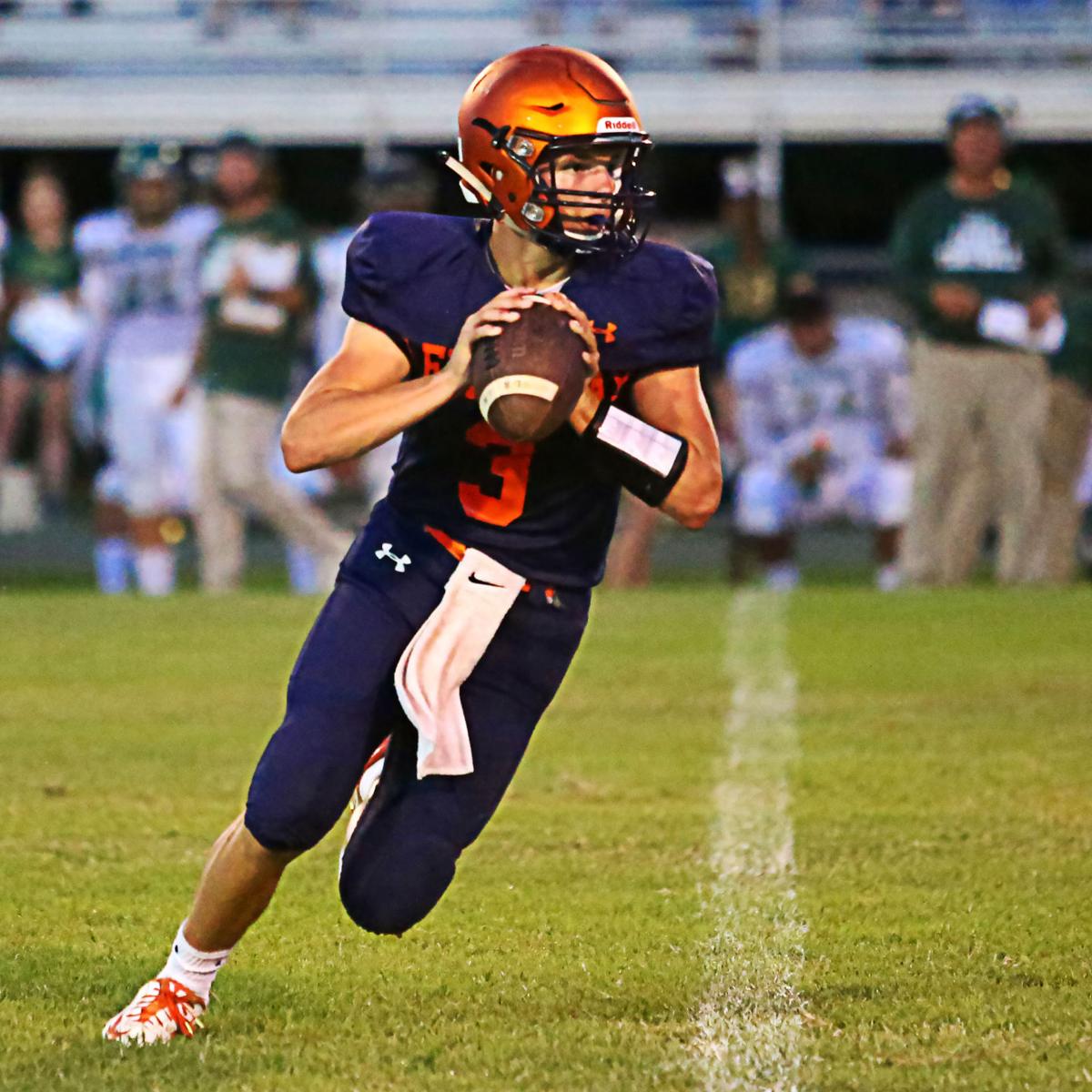 Quarterback Austin Andrle (3) rolls out and looks downfield for a pass attempt. 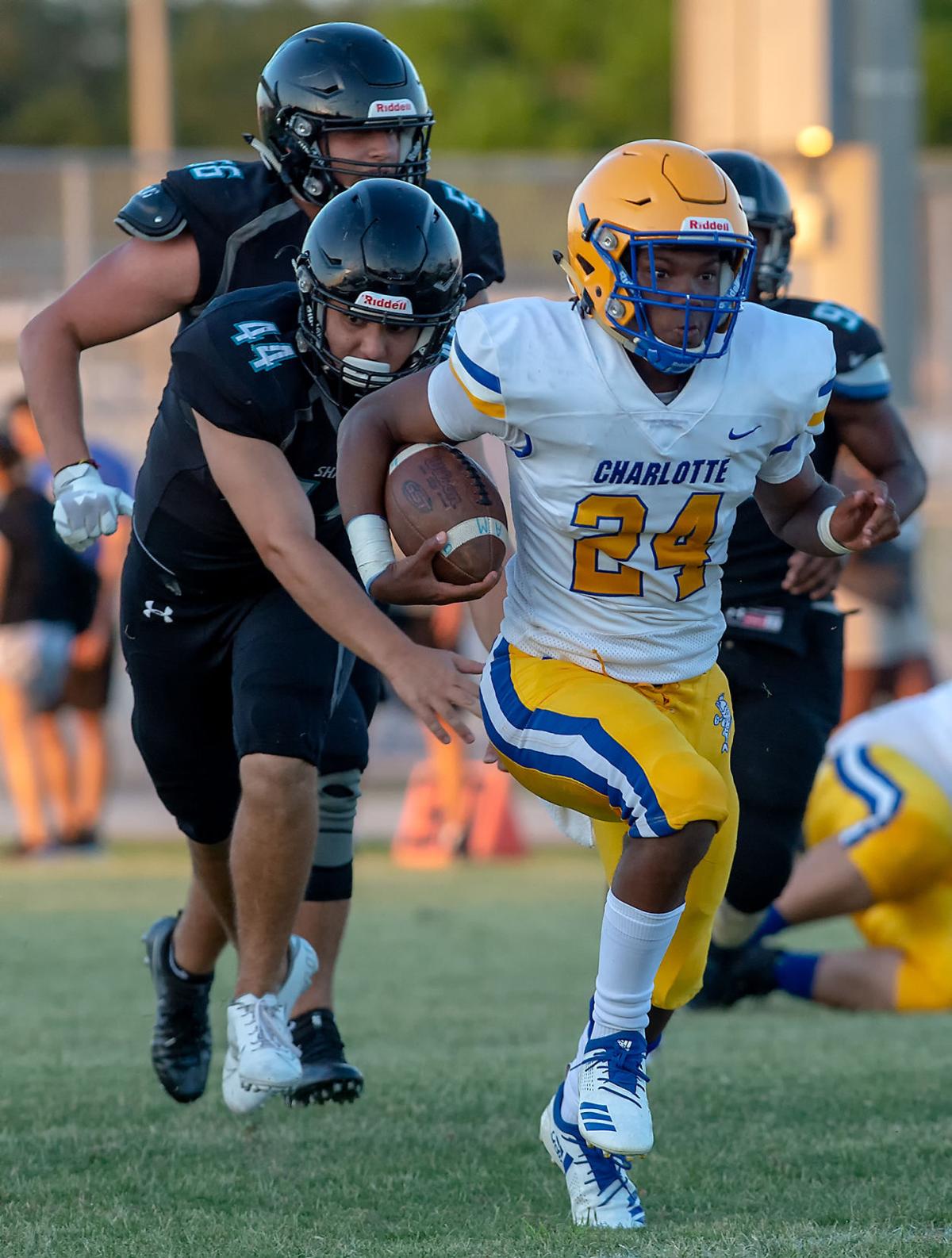 Charlotte’s Jeremiah Harvey breaks away from the Gulf Coast defense during Friday night’s game at Cape Coral High School. Harvey scored on the play and had over 100 yards rushing. 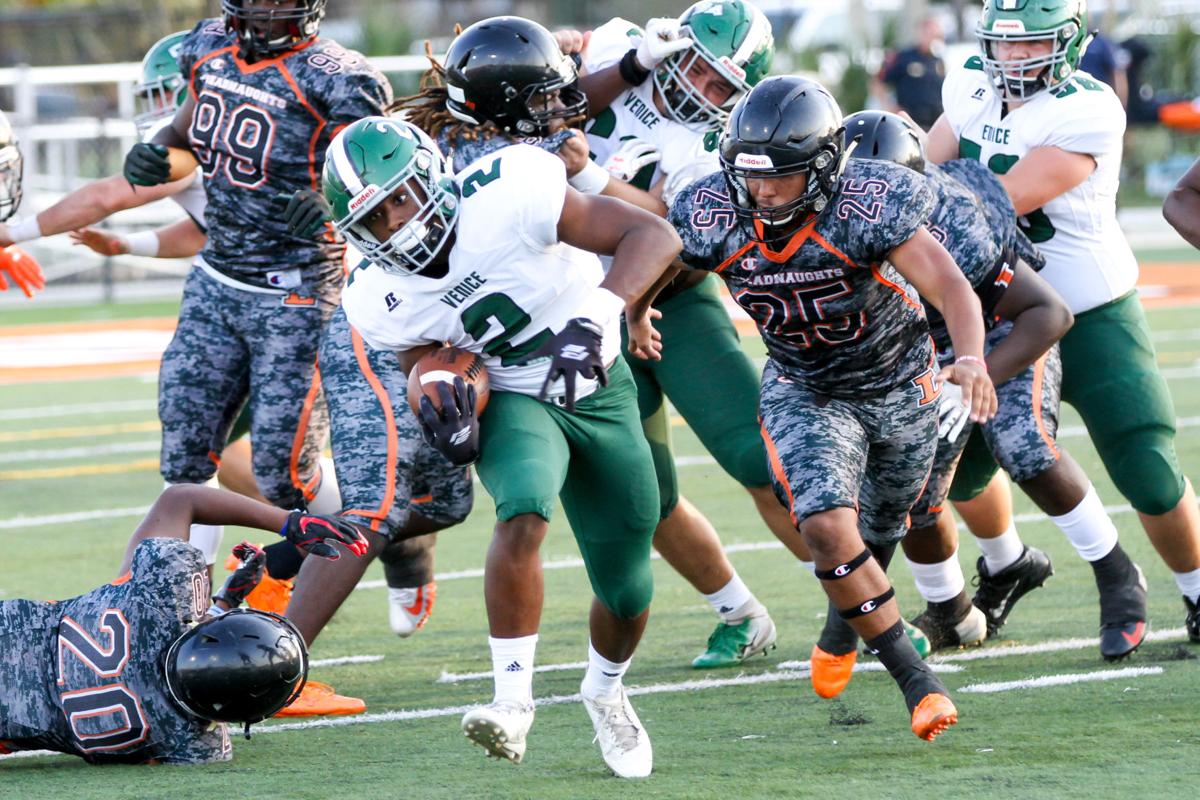 Brian Taylor was the key cog of the Indians’ offense on Thursday night, rushing for 185 yards and two touchdowns as he got his team out to an early lead over Lakeland.

Quarterback Austin Andrle (3) rolls out and looks downfield for a pass attempt.

Charlotte’s Jeremiah Harvey breaks away from the Gulf Coast defense during Friday night’s game at Cape Coral High School. Harvey scored on the play and had over 100 yards rushing.

Brian Taylor was the key cog of the Indians’ offense on Thursday night, rushing for 185 yards and two touchdowns as he got his team out to an early lead over Lakeland.

Charlotte High had one of the most exciting offenses in the area last season, using the read-option attack to force defenses to defend multiple plays at a time.

The Tarpons averaged 30.25 points per game and over 300 yards of offense per game, according to maxpreps.com.

But what happens when the Tarpons lose two mainstays of that offense?

Quarterback Alex Muse and running back Jayden Grant accounted for 2,230 yards and 34 touchdowns in 2018 and both have graduated. Charlotte will now look to junior quarterback John Busha and a stable of running backs to the offense churning out yards.

It’s somewhat of a theme heading into the new season. Across the area, there are many teams looking to replace their top offensive weapons from a year ago. As the stars of Friday nights move on to start playing on Saturdays or into their post-high school careers, up-and-comers step in to take the reins.

Here’s a look at the position groups that saw the most change:

Charlotte isn’t the only program breaking in a new quarterback. In fact, all but one school has a new athlete behind center.

Port Charlotte’s Logan Rogers, who threw for 1,152 yards and scored 21 total touchdowns as a sophomore, is the lone returning starter. Everyone else has made a change due to graduation or transfer.

Busha takes over for Muse and has looked the part throughout summer. The Tarpons will run a similar offense to the one Muse thrived in last year. The 6-foot-2, athletic junior has a wealth of weapons around him with Freddie Fletcher and Jeremiah Harvey returning as the leading receivers from last year.

Venice had the task of replacing Hayden Wolff, who is starting his freshman season at Old Dominion. Wolff threw for over 2,600 yards and 24 touchdowns as a senior, helping his brother Weston haul in 70 catches.

Weston will now likely be catching passes from Nico DallaCosta, who only had four pass attempts last year.

North Port is still locked in a battle with Devon Prokopiak and Sean Silverburg vying for the spot. Last year’s starter Steffan Johnson transfered to Venice this offseason.

After the graduation of dual-threat Arnold “Bubba” Mele, DeSoto County will be rolling with junior Tony Blanding.

Venice had plenty of turnover this year, but has done a good job of filling the holes left by last year’s seniors. There may be no position that shows that more than running back.

The Indians had to replace nearly 1,500 yards and 29 touchdowns from Brandon Gregory. To do so, they slid in Brian Taylor. Taylor saw some action last year with 361 yards and three touchdowns on 78 carries. He will asked to carry a much larger load in 2019.

As mentioned before, Charlotte looks to replace Grant, who was a big part of the Tarpon option attack last year. Ashar Thomas and Harvey, among many others, will take over. Both played significant snaps last season.

North Port lost senior Jalien Whye, who was the majority of the Bobcats’ offense before tearing his ACL late in the year. Whye averaged 98 yards per game with eight touchdowns. Moving up on the depth chart is Jeffrey Terry, Taylor Willis and Deandre Wilson-echols.

The Mantas will start Colby McCauley in place of Keegan Marinola, who amassed 776 of his 1,036 yards over the final five games of the season.

Though it’s not exactly offense, it deserves to be said that some elite names have moved on in the kicking game.

Charlotte’s Kenny Scribner will be punting for USF, Venice’s Zack Sessa is off to the University of Florida and Port Charlotte will be without a McCormick for the first time in six seasons.

Kickers are often overlooked in high school football, but if you have a guy that can kick 45-plus yards, it makes life a bit easier.

Soccer player Tyler Amaral will kick for charlotte, CCCCC for Venice and Port Charlotte is deciding between two players. North Port returns John-Victor Oliveira and Lemon Bay gets John Moore back, who missed last year due to injury.

The most obvious addition of the area came just before the season started when FSU commit Malachi Wideman announced he was joining the Indians.

The 6-foot-5, 194-pound receiver turns what was a deep Indians receiving corps into potentially one of the best position groups in the state as he joins junior Weston Wolff (70 catches, 796 yards in 2018) and speedy up-and-coming sophomores Jayshon Platt and Myles Weston.

Port Charlotte also debuts a new receiving corps with the graduation of leading receivers Marc Jean-Louis, Tyler Perry and Shemar Fleurissant, who accounted for 12 touchdowns and 83 percent of the receiving yards as a group.