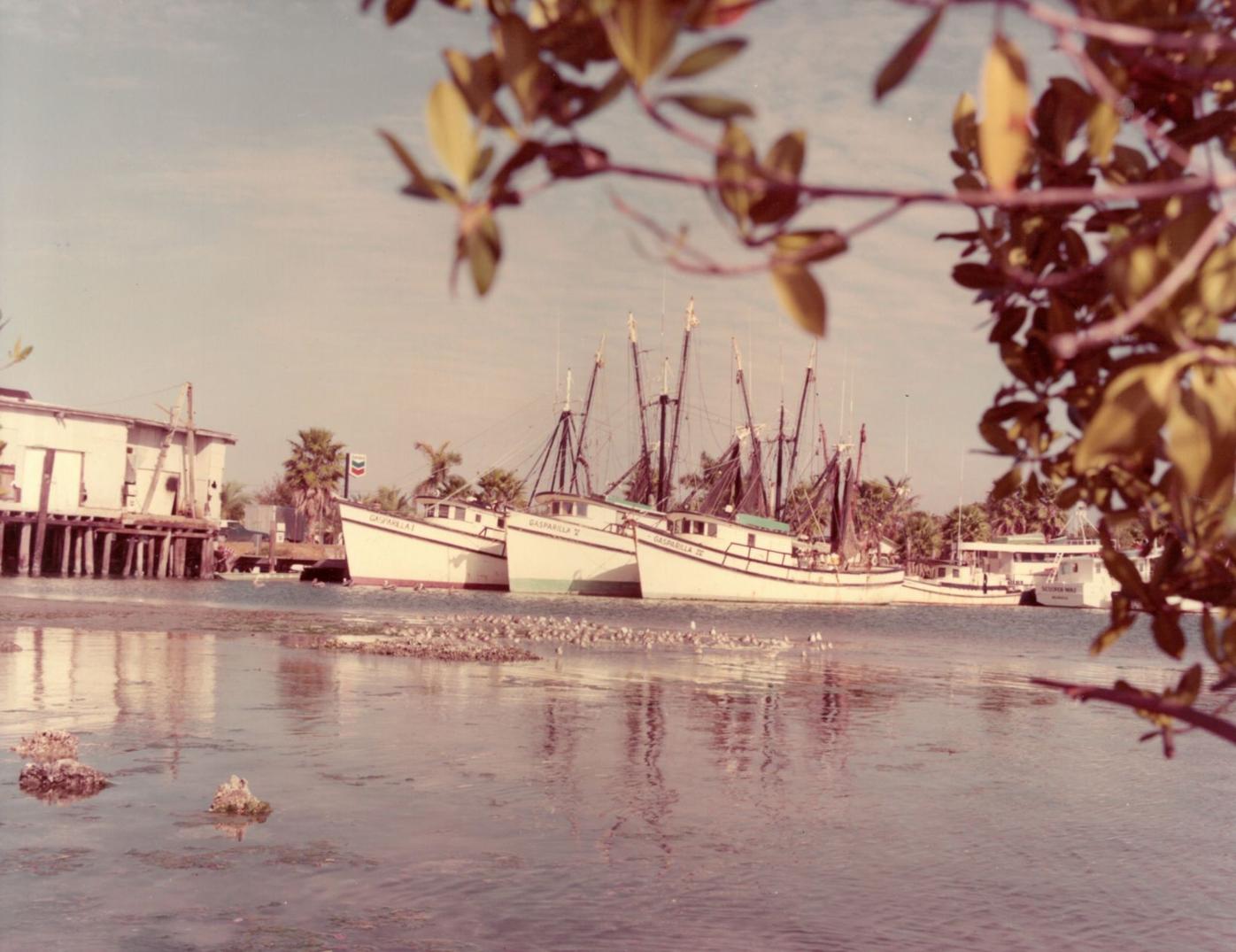 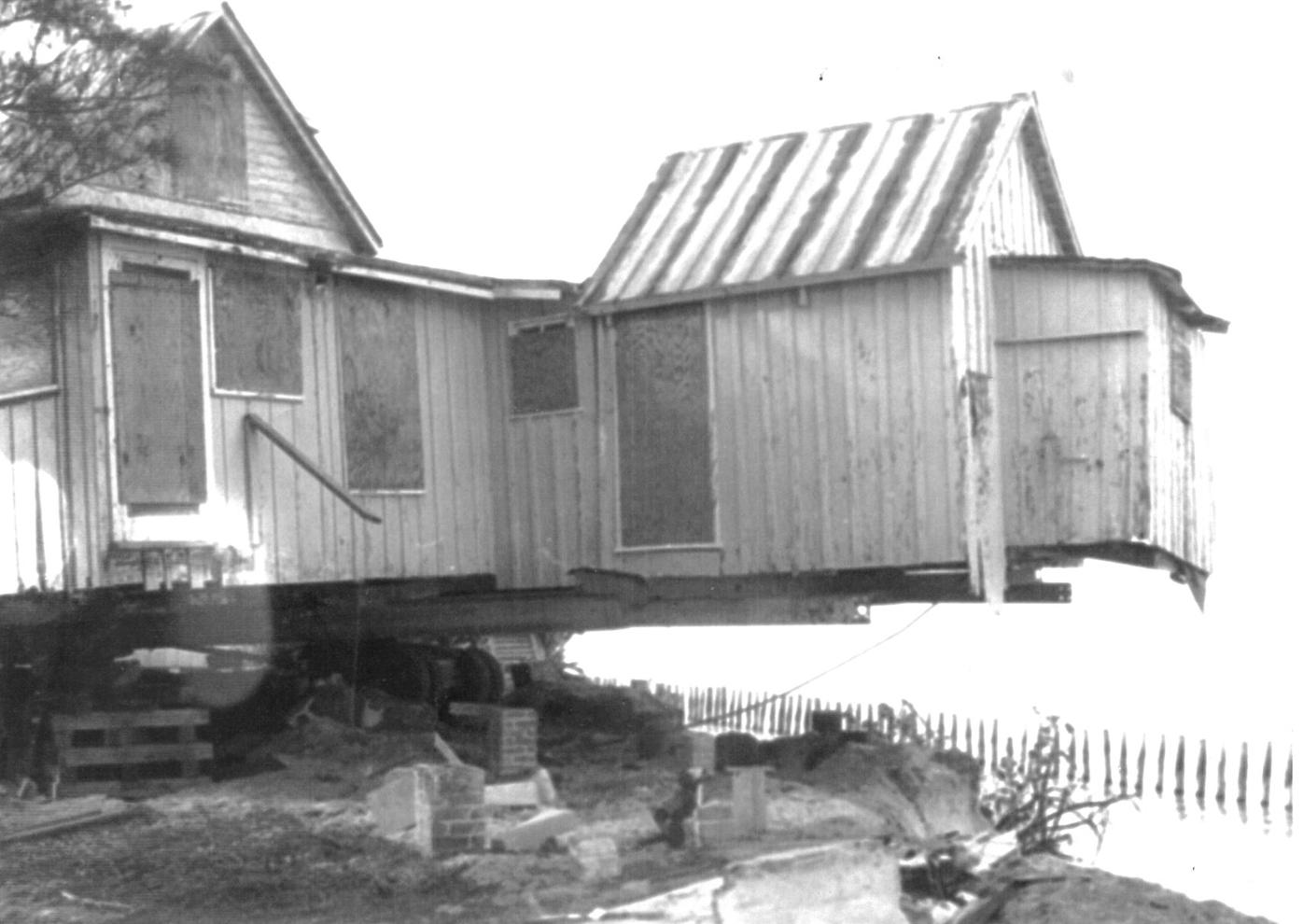 Englewood’s oldest structure, The Hermitage, built on Manasota Key in 1906, was saved for preservation, literally, at the very last moment. Gulf waters were eating away at the dune the historic building was sitting on. As this photo shows, erosion under one corner of the building had it hanging over the beach and surf making it airborne. The renovated Hermitage would become a nationally known Artist’s Retreat.

Englewood’s oldest structure, The Hermitage, built on Manasota Key in 1906, was saved for preservation, literally, at the very last moment. Gulf waters were eating away at the dune the historic building was sitting on. As this photo shows, erosion under one corner of the building had it hanging over the beach and surf making it airborne. The renovated Hermitage would become a nationally known Artist’s Retreat.

The 1990s was a time of transition for Englewood. We saw our community grow by thousands of new people, and our main road though town was widened considerably to handle the traffic. We let go of some big parts of our past, like the fishing industry that kept many families alive over most of century, and a landmark watering hole. Still, we managed to preserve at least a few of our treasured old buildings.

Englewood sadly said goodbye to Wood’s Cocktail Lounge, aka “Whiskey Corners” or just “The Corners,” the the town’s infamous landmark watering hole. It sat in the middle of the intersection of State Road 776, County Road 775 and Pine Street. It was demolished to rearrange the intersection because of construction of Merchants Crossing Shopping Center.

By 1994, Englewood Community Hospital had 300 people on the hospital, staff making it one of the town’s largest employers.

Englewood golfers were bragging there were now seven golf courses in town, both private and semi-private, by 1994.

Sarasota County Commissioners voted to save and restore Manasota Key’s Hermitage House compound on Manasota Key. The Hermitage, the oldest house in Englewood, was built by Swedish immigrants, the Johanson family. At one time there were many beachfront homesteads in Florida on both coasts. The Hermitage is one of the last remaining in the entire state, which makes it, historically speaking, extremely unique. Tax records show it was being lived in by 1907.

A long, hard-fought battle was staged by locals who wanted the interesting old house saved for posterity. It would prove to be a very successful Historical Preservation project as after restoration it became an Artist’s Retreat, nationally known and recognized.

The Cubans have landed

Englewood was shocked by the following event Valentines Day event in 1995 that was newsworthy enough to have been written up in both the New York Times and the Washington Post.

“Forty Cuban refugees swam ashore to a West Florida beach and were headed for a detention center in Miami yesterday, while U.S. officials decided what to do with 17 others held aboard a Coast Guard cutter after they were plucked from a boat a half mile off the coast.

“One other Cuban, suffering from exposure, was being held overnight in a Venice, Fla. hospital, said Cpl. Mike Bessette of the Sarasota County Sheriff’s Department.

“The landing at Manasota Key 20 miles south of Sarasota on Florida’s west coast, rather than in the Keys or in the Miami area, was a rarity.

“Immigration officials said the migrants paid smugglers to bring them to the Unites States from a refugee camp in the Cayman Islands south of Cuba. They left Grand Cayman on Friday in two powerboats, officials said.

“On the way to the United States, the Cubans told U.S. Border Patrol agents, one of the powerboats sank and the other developed mechanical problems. The Cubans said that the group abandoned the boat and climbed into a smaller boat and a raft that were being towed.

“The 58 men, women and children represent the largest number of Cubans to seek asylum since the refugee crisis of last summer.”

“Local law enforcement members furnished the hungry immigrants bags of hamburgers paid for out of their own pockets.”

For a short while in the 1990s, Englewood was home to an unique paddlewheel boat which was available for rentals.

Its former Captain, Kip Furman said, “I was Captain of the Lantern Queen when she was berthed at the Ship’s Lantern Restaurant in Placida. The boat had twin paddle wheels that moved the boat at a breakneck speed of about four and a half knots (about 5 miles per hour). She had a lot of class, but not a lot of speed. She was a fun, but challenging boat to operate. Aside from being the captain, one of the best parts of the cruise was seeing how much fun the passengers had cruising on an authentic paddle wheeler.”

The Ship’s Lantern was a popular spot on Ester Street in Grove City, across the boat basin from the Cape Haze Marina.

Residents of Charlotte and South Sarasota counties got a good soaking on the third week of June, 1995. The ground was soaked by several days of rain, but on June 23, we got 12 inches of rain over night and into the morning. Because our coast is pretty flat, the water didn’t have anywhere to go until it ran off the land and cycled through a couple of low tides. While motorists found themselves frustrated by flooded roads one man countered the foot-deep water on West Dearborn by paddling a canoe through the middle of town.

Englewood, in 1995, could boast of 28 churches representing most major denominations.

In 1995, Florida voters passed a controversial ban on the use of most fishing nets near shore. The measure was supported by sport fishing interests, recreational boaters and boat manufacturers and some environmentalists. It severely limited the size of and the kind of nets allowed for fishing in bays and near shore. The ban was said to be a way to cut down on the amount of mullet and other feeder fish being killed in order help the gamefish population recover from declining numbers.

All over Florida, and in Englewood and Placida, fishing fleets became smaller along with catches and profits. Many local fishermen whose families had fished for generations left the commercial fishing industry, and the Placida Fishery eventually closed down (see below). The “fisher-family” life style started to become a thing of the past.

Along with the Community Hospital the biggest employers in town are Publix, Kmart, Walmart, Florida Power & Light, and the school systems in both Sarasota and Charlotte Counties.

Rotonda West subdivision got off to a good start in the 1970s with TV exposure through the Superstars athletic competition, but new home construction slowed to a crawl by the 1990s. The problem was a list of disputes between individual property owners and the developers, which had promised much and delivered little. Many lot owners were sold property that was too low and swampy for homes. The promise of seven golf courses never materialized, and the water connection between the backyard canals and the Gulf of Mexico was never going to happen. Roads and drainage systems crumbled. By the mid-1990s, a multi-million-dollar lawsuit between the property owners and developers loomed large.

Into this mess stepped Gary Littlestar, a developer who found an infusion of investment money, and worked out settlements to the lawsuit. He figured out how to get the unbuildable lots to the Charlotte Harbor Preserve, worked out a compromise on the golf courses. Charlotte County took over and fixed the roads.

Construction on the town’s first church building, a Methodist Church, was started somewhere between 1926 and 1928. The initial services were held in 1928. In 1962, the Lemon Bay Historical Society acquired the historic building which was no longer being used as a church. The building, which had been moved from its original location to West Green Street began to decline. Repairs were made on the building over the years, but it was not until 1997 that the Historical Society attained state grant money and enough local donations for a full renovation of the town’s first church structure. The state gave the building a new name, The Green Street Church Museum. Although no longer a church it became available as a wedding chapel and meeting hall. (You may have seen recent stories in the Sun about the church moving a mile away to its new home on Indiana Avenue, next to the Lemon Bay Cemetery.)

Englewood’s Chamber of Commerce stated the year-round population was approaching 45,000 in 1997-98. That meant the town was outgrowing its main road through town, State Road 776. In the 1990s, workers began widening what’s known as Englewood Road, Indiana Avenue and South McCall Road, segment by segment, from one end of town to the other.

By the mid-1990s, the middle of Englewood looked a bit like a trench war battlefield, as workers moved utility lines, built a new stormwater drainage system, and created the new roadway, with new bridges over the creeks, sidewalks and bike lanes, with shiny new stoplights and street lights. Traffic snaked through the ever-changing detours through town, and repair shops became expert at fixing suspension systems in all kinds of cars and trucks.

Finally, as the decade ended, the construction moved south toward Port Charlotte were a second span of the El Jobean bridge was built.

The fishing industry was the lifeblood of this area for many generations. In its day, the historical Placida Fishery, was the hub of the southwest Florida fishing industry. Fish were shipped over all the world from Placida. The Fishery was one of the largest producers of mullet in Florida.

“Sometimes back then,” said Eunice Albritton the fishery’s owner and manager, “here in Placida we would fill five or six railroad cars a week with fish.”

It was a sad day in 1999 when the Fishery closed it’s doors, partly because of effects from the net bans.