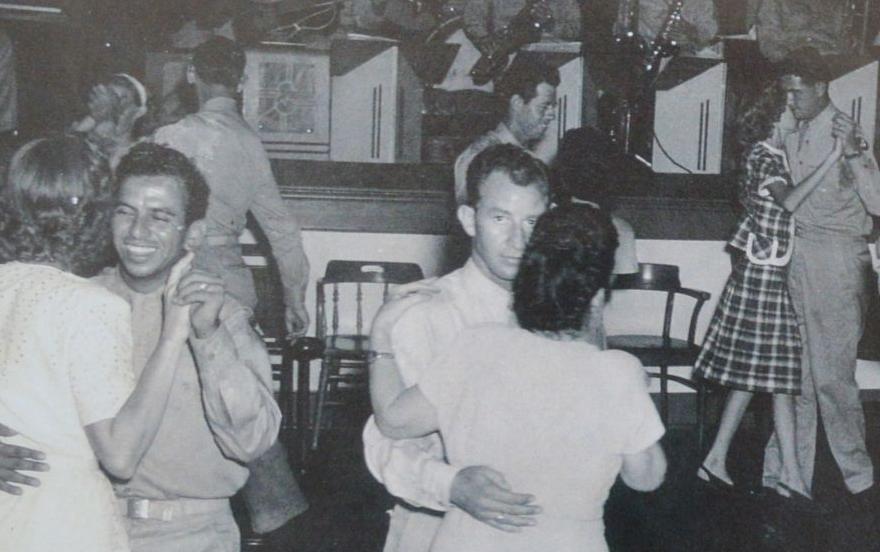 During the war, the Punta Gorda Women’s Club on Sullivan Street was turned into the USO. Everyone tried to make the soldiers feel welcome there. Something was going on at the USO all the time, like this dance with music provided by a band from the base. 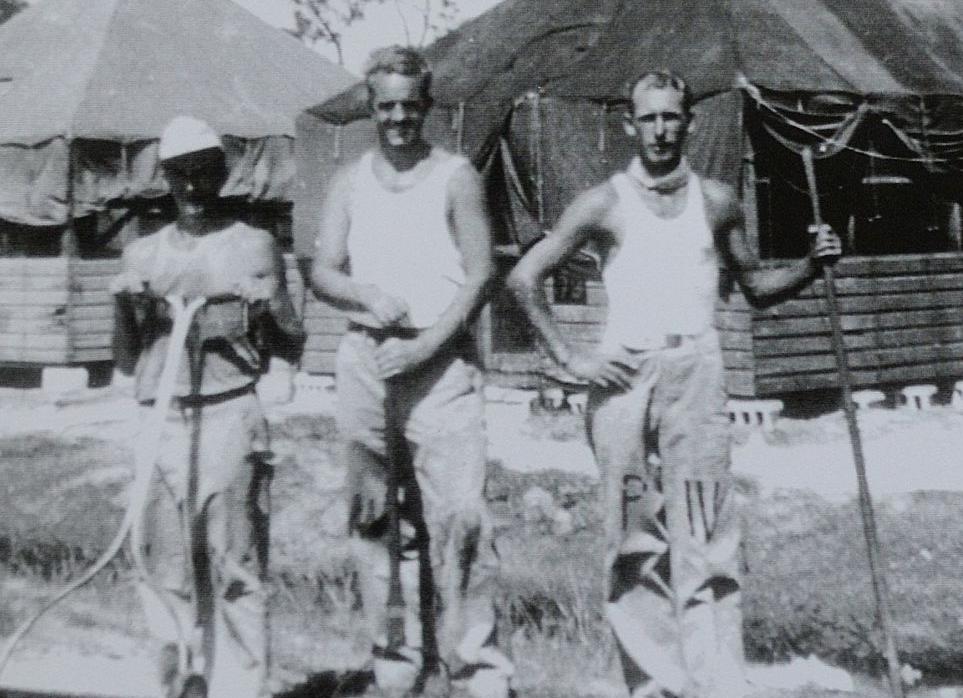 Prisoners of war like these three men were sent to the Punta Gorda Airfield, where they served as cooks and performed other work. Elevated tents seen in the background are typical of the quarters airmen lived in.

During the war, the Punta Gorda Women’s Club on Sullivan Street was turned into the USO. Everyone tried to make the soldiers feel welcome there. Something was going on at the USO all the time, like this dance with music provided by a band from the base.

Prisoners of war like these three men were sent to the Punta Gorda Airfield, where they served as cooks and performed other work. Elevated tents seen in the background are typical of the quarters airmen lived in.

What a treat! Did you know that during the war, folks in Punta Gorda treated soldiers stationed here like they were their own? Doesn’t surprise me.

“I remember Fred C. Babcock wintering in Punta Gorda during the war. He would call Mother about 3 months in advance to tell her to hang the meat he would need. I would always ask him, “Why are you doing that?” He would reply that he likes his meat to sit until it is “covered.” I didn’t know what that meant, but when he got here the meat looked awful. He called it aged beef. He really was a nice man and lived on Sullivan Street, one block away from our store.

“The Babcocks lived next door to the USO (Punta Gorda Women’s Club) on Sullivan Street and that didn’t bother them at all. When they weren’t here, the Fridays lived there as Mr. Friday ran Babcock Ranch. Mrs. Friday helped out at the USO next door and would also invite soldiers over.

“The Punta Gorda Women’s Club was turned into the USO and everyone tried to make the soldiers feel welcome in Punta Gorda. Something was going on at the USO all the time and even more on the weekends. A band from the base played music and soldiers danced all night. Lonnie Persons and her mother helped, as did my sister Carmen, Eloise (Adams) McDougal and a lot of other people. They provided food, drinks, desserts and other stuff for the soldiers. The ladies of Punta Gorda really wanted them to feel at home here. In fact, a lot of folks would invite them to have Sunday dinner at their homes.

“Sandy (Hancock) Wilmot is one who remembers having soldiers at her house for dinner, as well as some prisoners of war who helped her father at the air base. There were POWs there and most were cooks or worked at other jobs during their stay. I have a picture of one of them and he is a nice-looking young man. They were really lucky to have been sent to the Punta Gorda Army Airfield.

“Eloise McDougal, while helping out at the USO, met a very good-looking young pilot. They dated for a long time and finally got engaged before he went overseas. Punta Gorda was the jumping-off place for the pilots. After their training, they went straight to Europe into a very bad war. Many of these pilots did not come home and Eloise’s future husband was one of them.

“It was sad to hear about pilots who didn’t come home. A lot did make it back, but you never forget the ones who didn’t. One unit at the airfield had only one pilot return, and that was awful to hear. These soldiers were real heroes and everyone in Punta Gorda was really upset to hear this bad news. The airbase had some great young men stationed there.

“My sister Carmen also met one of the nice guys from the base and started dating him. He was part of a crew that made sure planes’ guns were accurately sighted so the pilots could hit the target they were aiming at. At the south end of the runway, something that looked like a small hill was built. At the front of the hill was an opening and Dutch (Holub) would drive the planes there, shoot the guns into it and sight them correctly to ensure they could hit a target during training missions. That structure is now part of the Experimental Aviation Association’s (EAA) building at the airport. After the war was over, Carmen and Dutch married and moved to Oregon.

“Now Sylvia (Willis) Rivers remembers something that might surprise you! A couple living in Charlotte Harbor on the big side of the bay, on Bayshore Road, were German, and everyone talked about the couple writing notes about the Army airfield and taking them out to Boca Grande Pass to give to the German subs that came close to Florida.”