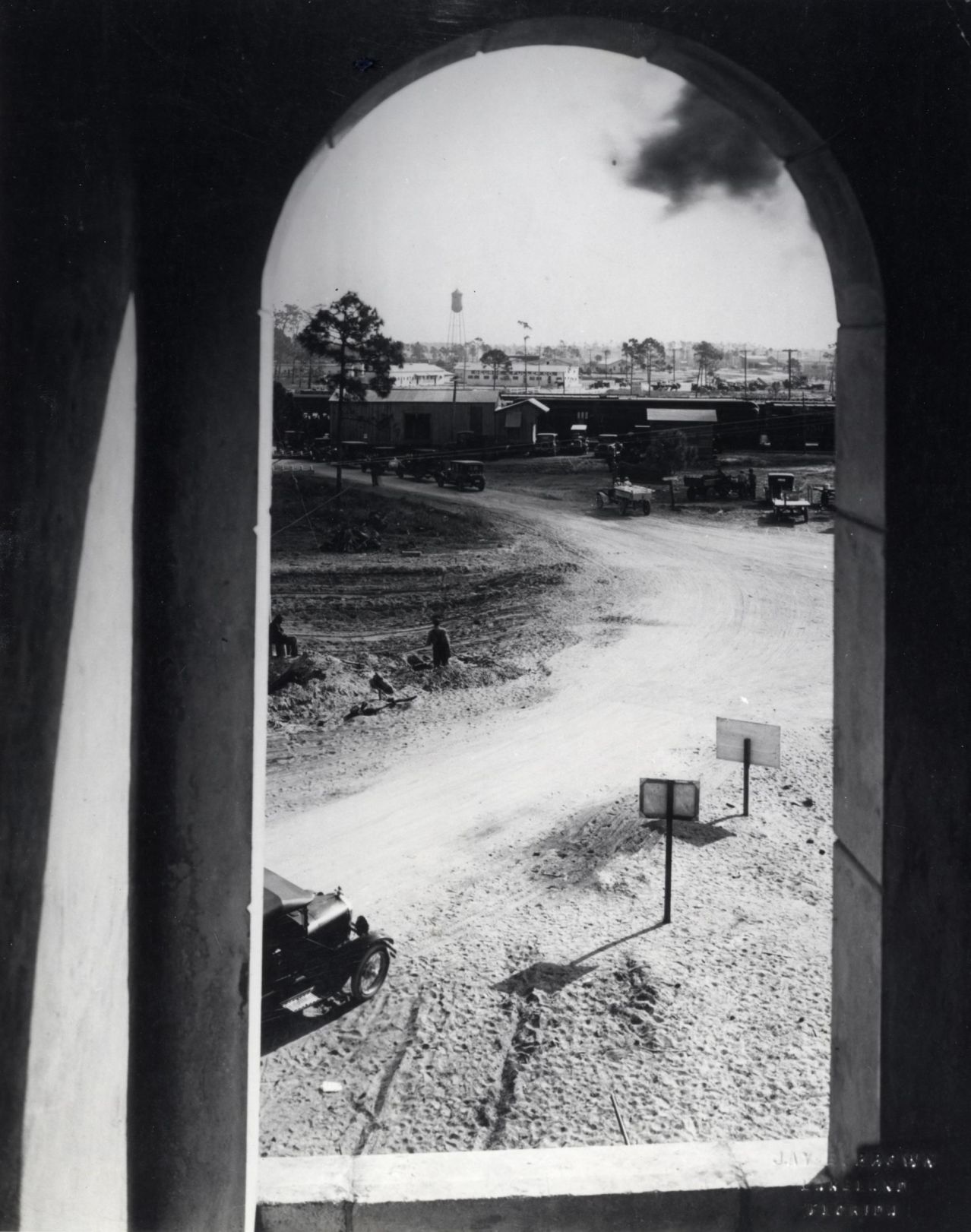 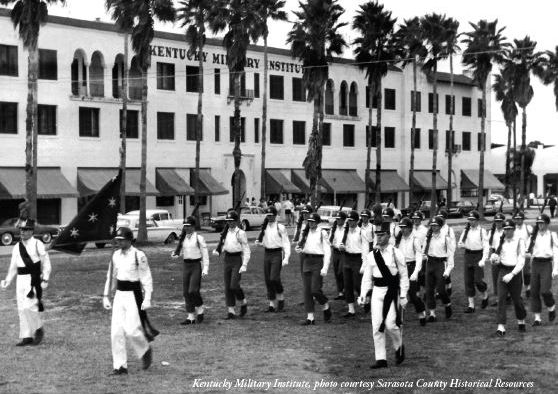 KMI officers and students march on their parade ground, which is now Centennial Park, across from their former headquarters, now the Venice Centre Mall. Their presence in Venice for 40 years has been honored and recognized with an historical marker. 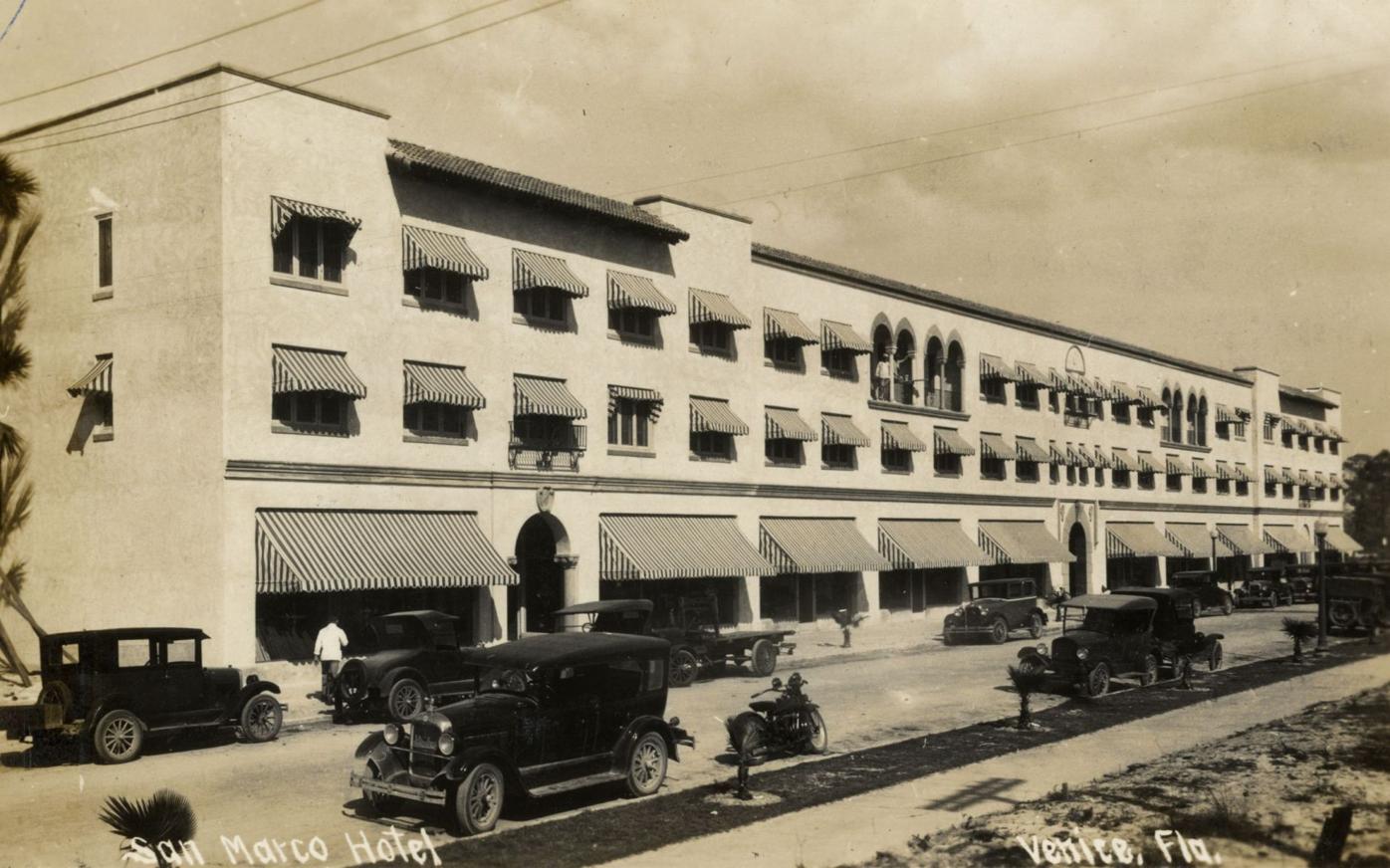 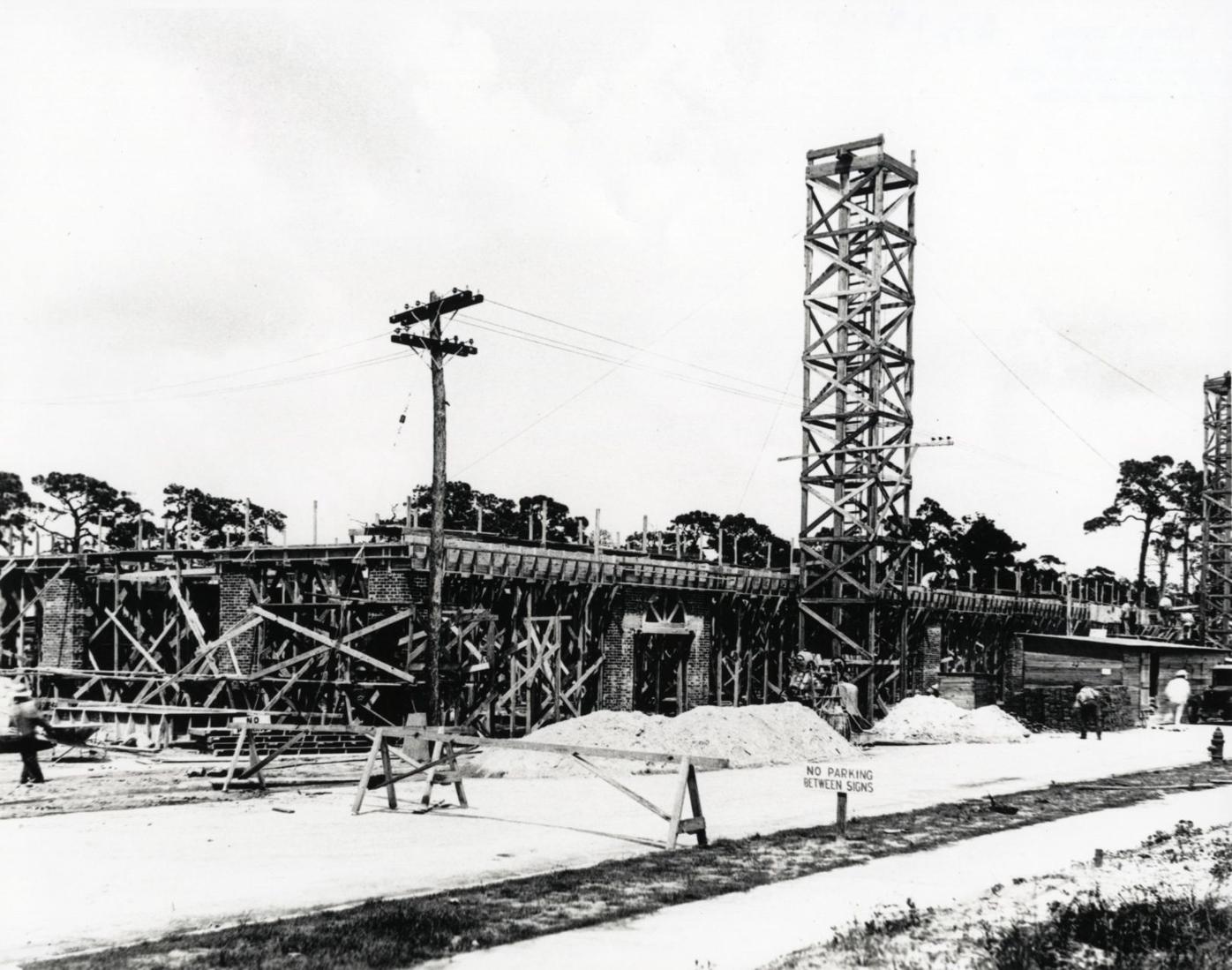 The San Marco was different than most of the early buildings in Venice in that it was constructed of steel reinforced concrete. It was built in just three months at a cost of slightly less than $500,000.

The San Marco was different than most of the early buildings in Venice in that it was constructed of steel reinforced concrete. It was built in just three months at a cost of slightly less than $500,000.

The burgeoning city of Venice received an early Christmas present on Dec. 10, 1926, when the San Marco Hotel formally opened its doors to the public.

The second of three hotels that would eventually be built by the Brotherhood of Locomotive Engineers, the three-story hotel encompassing an entire city block in the center of town was described by a local newspaper as “one of the most beautiful yet planned for Venice.”

The first building constructed in the emerging city was the adjacent Hotel Venice because the BLE needed a place for potential home buyers to stay when they visited. It opened to the public on June 21, 1926.

Work on the San Marco began two months later and was completed in just three months. It contained 92 rooms with space on the ground floor for 13 shops.

The third, the Park View Hotel, opened in 1927, was shuttered after economic hardship, but was located on the present site of Venice’s post office.

Designed in the Venetian architectural style, the San Marco differed from the city’s other early buildings in that it was constructed of concrete block, covered with stucco, and reinforced with steel columns. The hotel’s owner, R.W. Wishart, was a widely known contractor at the time and was also responsible for much of the development on Davis Island in Tampa.

“Everybody in town knew that the hotel was strong,” said Julia Cousins-Laning, who moved with her family to Venice when she was 6, about the time that the San Marco was built.

“Whenever bad weather threatened the area, local families would be invited to stay there to ride out the storm. We children would run up and down the hallways, gathering the little soaps and shampoos.”

The San Marco featured a modern steam heating system with radiators offered in each room. The Dec. 10 edition of The Venice News also mentioned that the hotel featured patented water softening equipment for the comfort of its guests.  Rooms were available for $3 per day, each available with bath.

The collapse of Florida’s land boom of the 1920s, coupled with the Great Depression, sounded the death knell for the growing City by the Gulf. The economic collapse eventually forced the city’s three hotels to shutter their doors.

The San Marco building remained empty until June 1932 when it was announced that the Kentucky Military Institute (KMI) in Lyndon, Kentucky would be leasing the San Marco and Hotel Venice buildings to serve as the school’s winter quarters.

The first class of cadets, about 250 in number, arrived at the Venice Train Depot on Jan. 5, 1933, aboard a special Seaboard Air Line train called the KMI Special. It was said at the time that when the military school arrived, it roughly doubled the population of the town.

KMI leased the two buildings from 1932 until 1939, at which time they purchased the former hotels as well as the former Orange Blossom Garage (Venice Theatre today), just east of the San Marco. Having a Florida campus was a marketing strategy that boosted the school’s attendance.

KMI continued to winter in Venice every year until 1970 when it was forced to discontinue the visits due to declining enrollments. The school formally closed its doors the following year, largely due to anti-war sentiment against the Vietnam War.

The San Marco is now the Venice Centre Mall. The Hotel Venice was sold to a private company that converted the building into a retirement community.

Larry Humes writes about local history and can be reached at 1926venice@gmail.com.

While the Venice museum remains closed because of the COVID-19 pandemic, visit: venicemuseum.org.