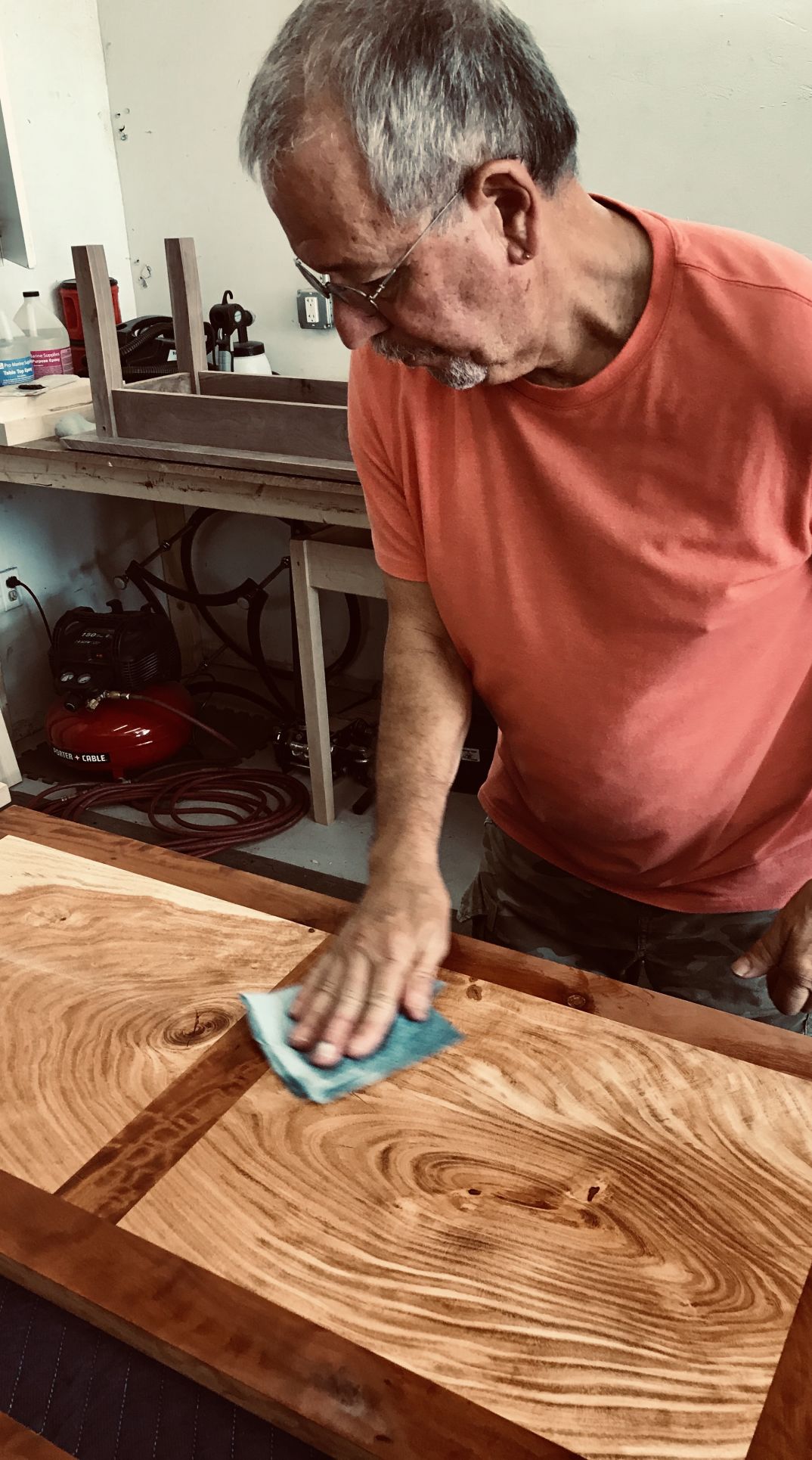 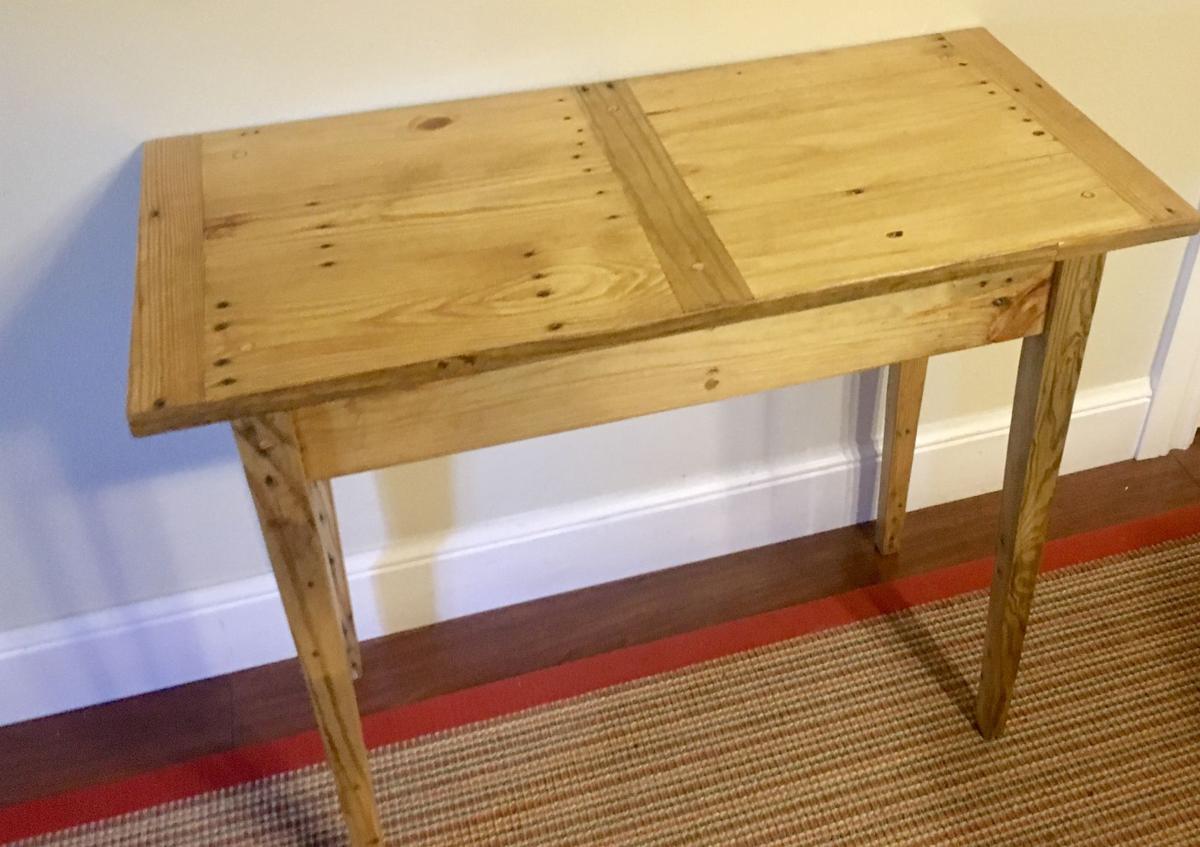 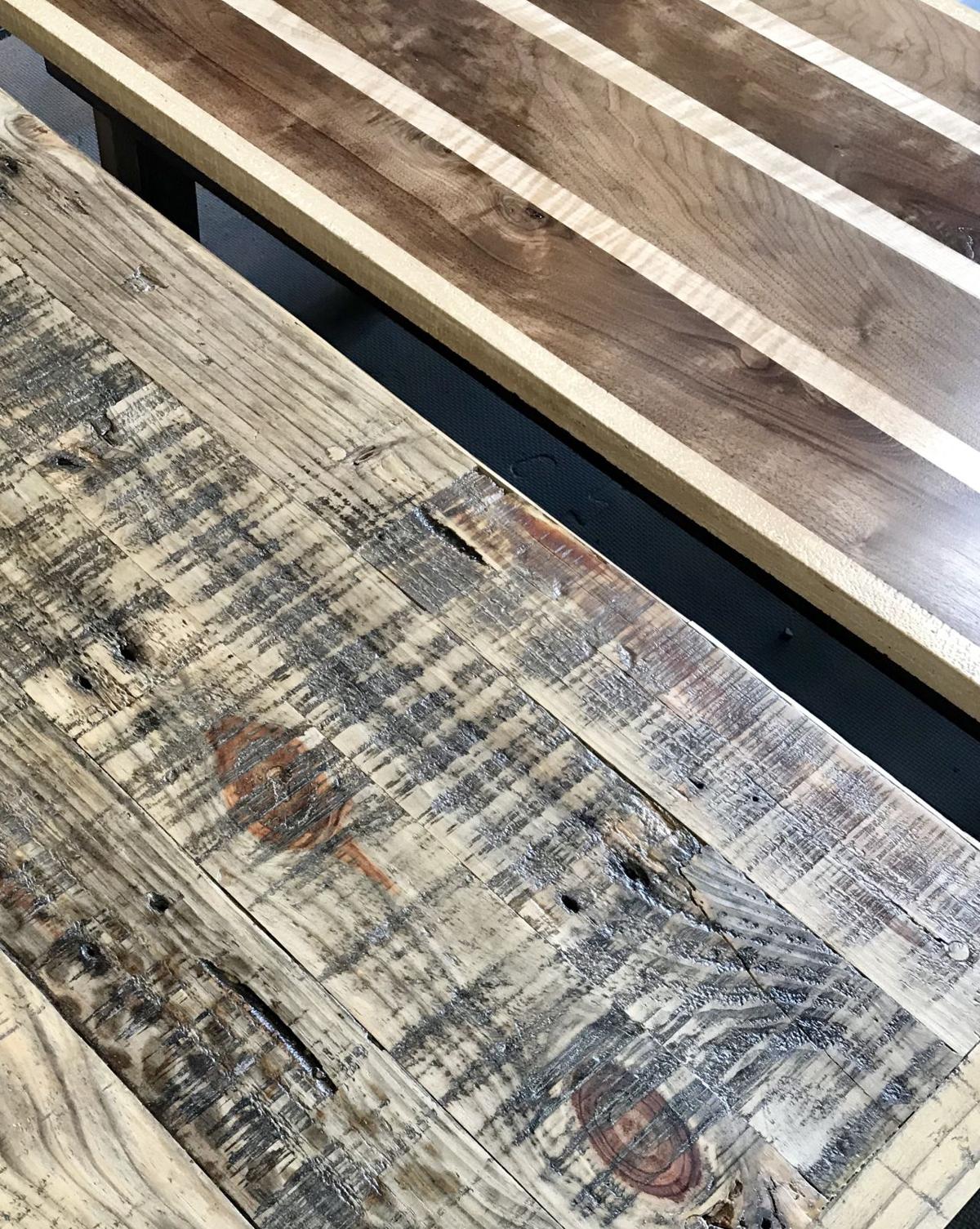 Frank Giacobbi selects pallet board slats from beneath the pallets, seeking the unique scarring that sets his pieces apart (left). The separate tabletop at upper right alternates walnut with curly maple inlay.

Frank Giacobbi selects pallet board slats from beneath the pallets, seeking the unique scarring that sets his pieces apart (left). The separate tabletop at upper right alternates walnut with curly maple inlay.

To Frank Giacobbi, no wood is dead.

Give him just about any old piece of eucalyptus, cherry, cedar, mahogany, maple or oak, and he’ll find potential in it. He can bring back the glow of life, preserving it forever in a coffee table, accent piece, console table or nightstand with minimalist, Shaker-like lines. Simple and free of excessive adornments, his pieces blend with any décor.

Every piece of wood used at Port Charlotte’s Hardwood Island Accents has a story which, thanks to Giacobbi’s artistry, doesn’t end. It lives on in a new family’s home, holding their holiday place settings, favorite books, alarm clocks and floral arrangements.

“I love the idea of having something I made in somebody else’s house,” he said.

Even a eucalyptus tree taken down 15 years ago by Hurricane Charley reveals artistic whorls and striations when cut and polished. In Giacobbi’s hands, either side of its rough slabs can make a stunning tabletop or piece of wall art.

His father, Peter, a Sicilian woodworker, immigrated to Dorchester, Massachusetts. From him Frank learned the art of finish work.

In the 1990s, Frank and his twin brother ventured into the then-booming industry of unfinished pine furniture, building jelly cupboards, freestanding pantry closets and other raw wood pieces. They set up shop in a Hanson, Massachusetts, factory that had once been the original Ocean Spray headquarters.

“If I’d had some of the floor boards or beams from that place, what I could have made,” Frank mused.

“It just came easy to us. Even A.C. Moore wanted us. Orders came pouring in. But it was just the two of us and it got overwhelming.”

For 16 years afterward he drove for a family trucking company and, when the economy went south, returned to his roots doing quality finish work, crown moldings, floors and trim.

He first met his wife, Kathy Buda—more recently a vocalist with local combos Two Can Jam and The Keepers—in 1972; ran into her again 20 years later—appropriately enough, in a Home Depot parking lot; and, as Frank says, “That was it. It’s been a blast ever since.”

While downsizing from their house to a North Fort Myers condo, Frank consigned much of the furniture he’d built for their home to Treasure Chest in Punta Gorda. It all sold out, and the shop asked for more.

It only made sense to open his own woodworking shop again, this time by himself.

It’s hard to imagine anyone loving wood as much as Frank Giacobbi does. And he has a keen eye for the story that every piece tells.

Long before trendy distressed pallet board flooded Etsy and Pinterest, Frank embraced reclaimed wood. In the Northeast, there was plenty of it.

“In Massachusetts, we used it all the time, from a company that bid on the wood from old barns. They tore down a 1790 tavern in Bridgewater, and I made a sofa table from the wood. I’ll never sell it.”

He also deals in pallet board but looks for the unique scarring on the slats from underneath the pallet—marks from the wood’s life which give it individual character.

Tap maple tells its tale through holes pounded in for sugaring every spring.

Spalted maple, with characteristic black marbling from the early stages of fungus-induced rot, is as rare, some woodworkers say, as truffles in the forest. Even harder to find than curly, flame, tiger or bird’s-eye maple, it can be transformed into a striking tabletop that retails for as much as $1,000.

Purple heart, a dense, eggplant-hued exotic from the Central and South American rain forest, is so pricey that Frank uses it sparingly, in strips of rich, contrasting inlay.

He applies mineral spirits to unfinished woods to reveal and determine their ultimate finished colors. Then he’ll finish them with acrylic, Fiddes Mellow Wax Polish or, sometimes, linseed oil massaged in over and over, until the color emerges like a Polaroid snapshot.