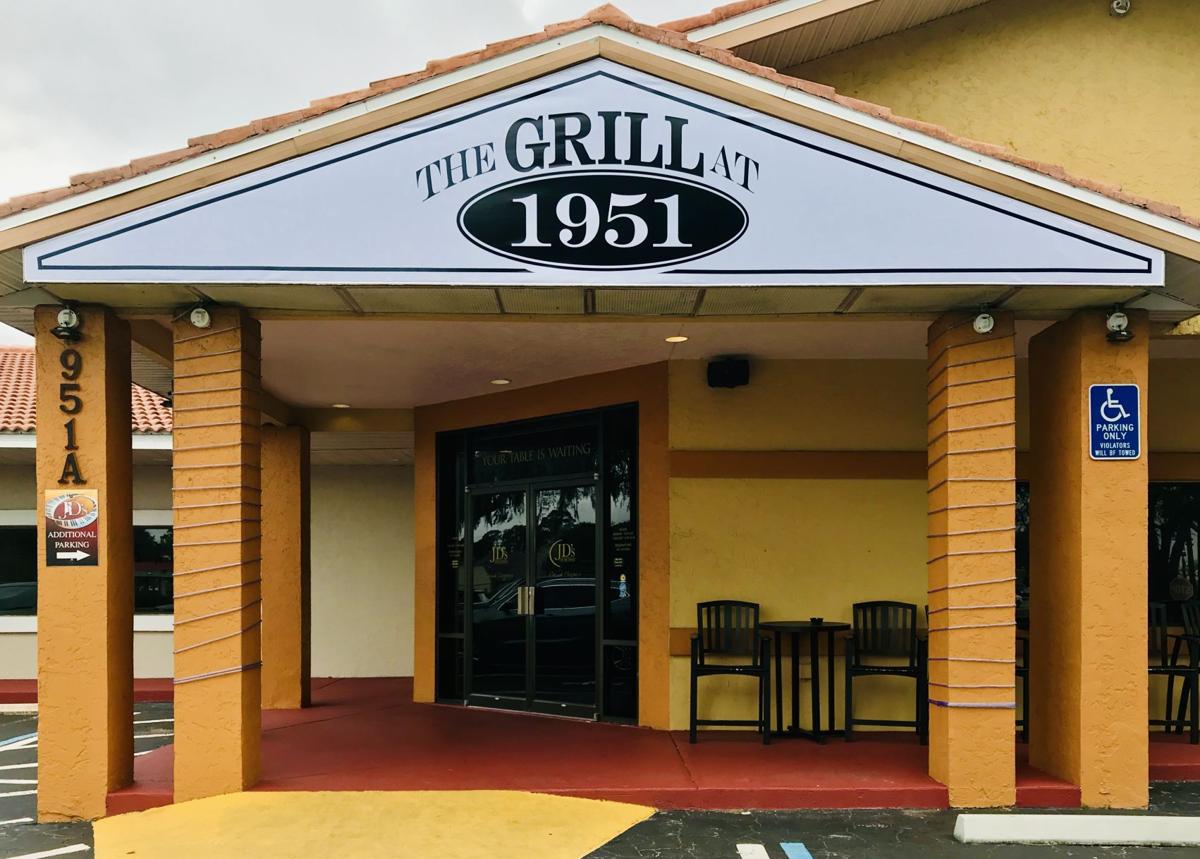 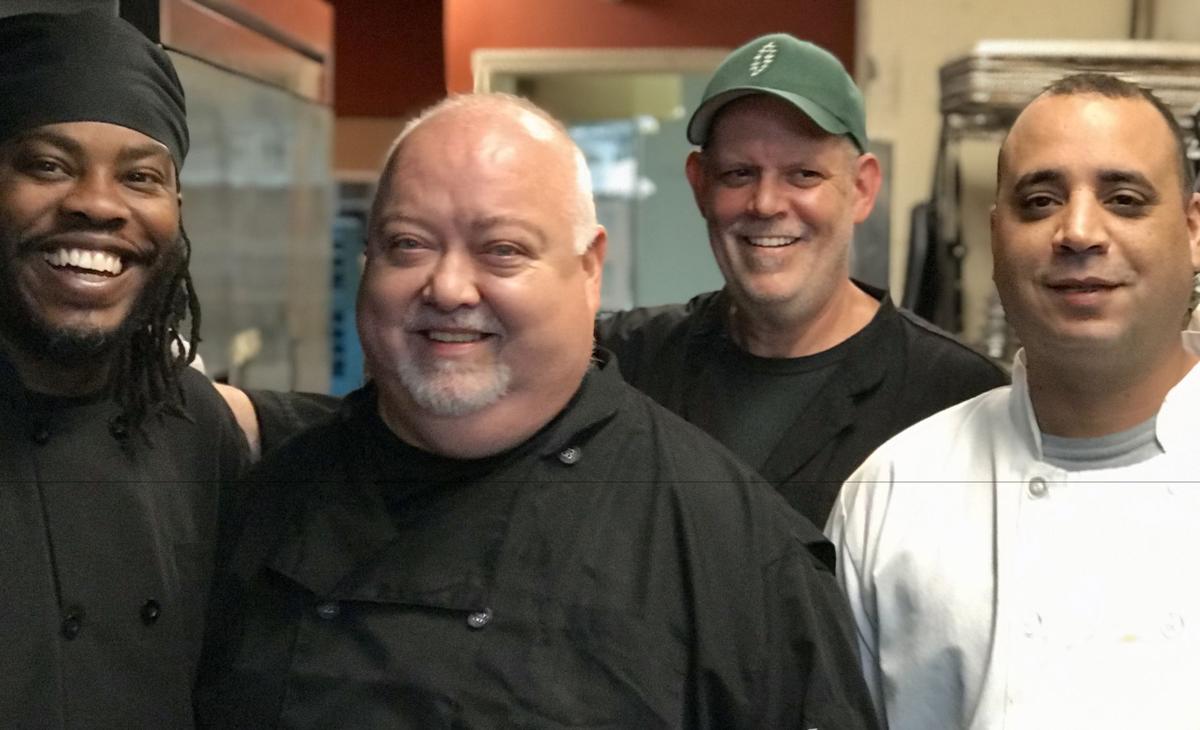 The chefs of The Grill at 1951: Kellen White, Ed Boger, Bobby Holt and Tony Barbosa. 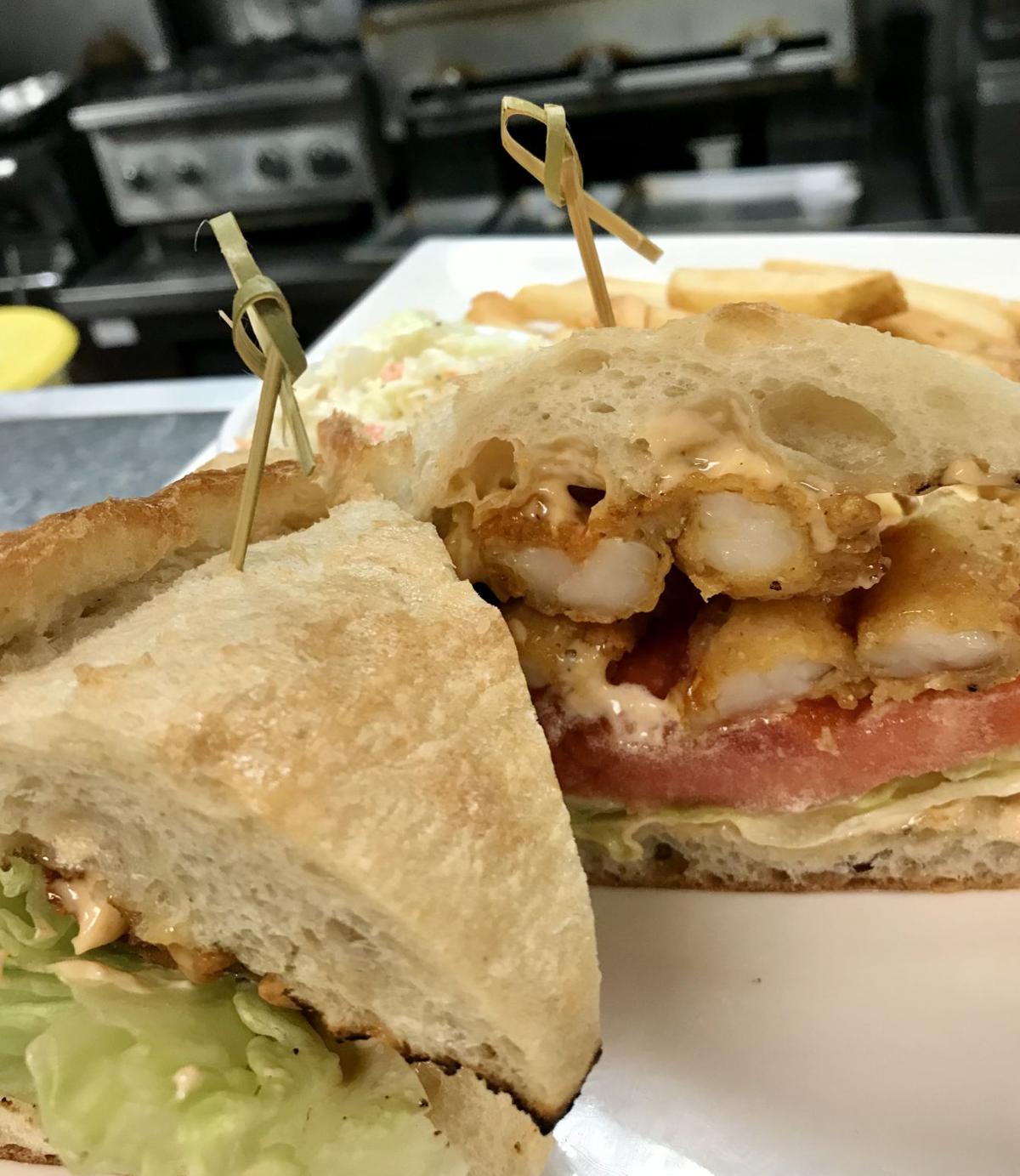 The Grill at 1951’s Fried Shrimp Po’boy, with lettuce, tomato and spicy aioli, on grilled French batard bread with a crispy crust and a light, airy chew. 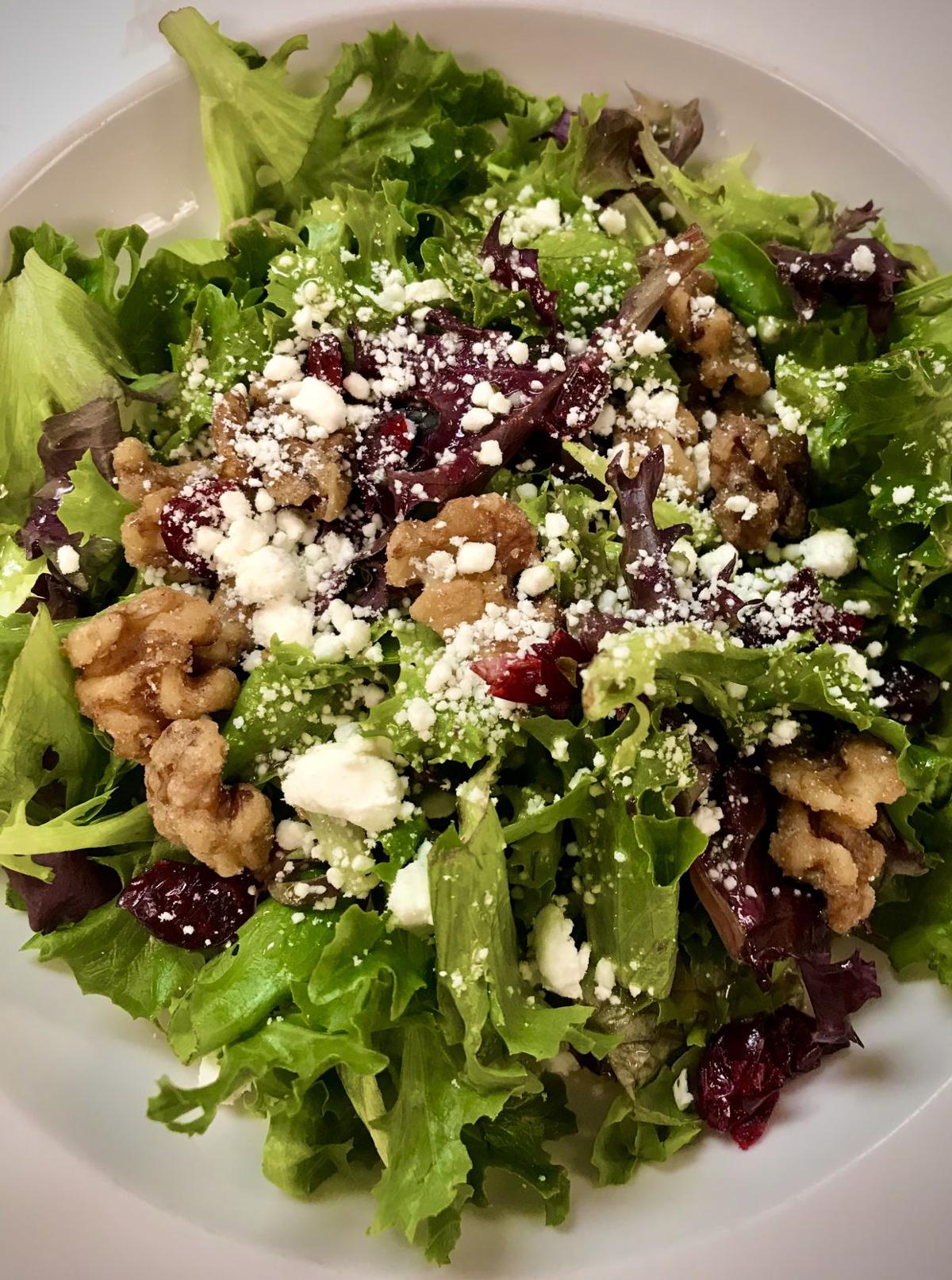 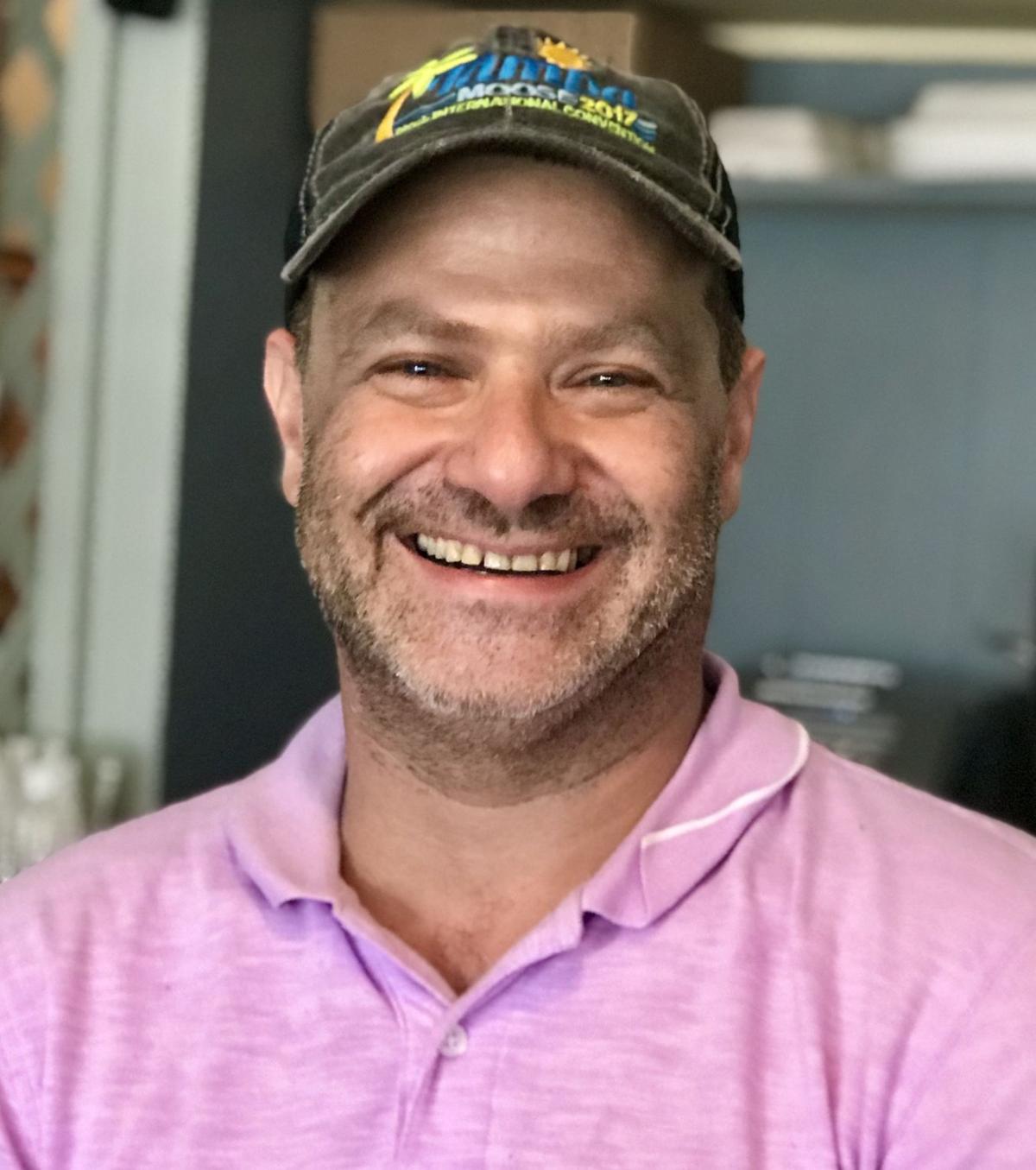 Chris Taranto has remade Bud’s Restaurant in his family’s image as Mitch’s Kitchen.

The chefs of The Grill at 1951: Kellen White, Ed Boger, Bobby Holt and Tony Barbosa.

The Grill at 1951’s Fried Shrimp Po’boy, with lettuce, tomato and spicy aioli, on grilled French batard bread with a crispy crust and a light, airy chew.

Chris Taranto has remade Bud’s Restaurant in his family’s image as Mitch’s Kitchen.

Once a restaurant changes its marquee, you can bet there’s more change afoot in its kitchen.

The Grill at 1951 isn’t the first new name for the restaurant beside Port Charlotte’s Days Inn. It was once a joint called Johnny’s Be Good — more popularly, Johnny’s. As one traveling reviewer put it, “It’s a sports bar.” An electric train chugged around its crown molding.

Nearly a decade ago, the place underwent an unlikely transformation. Besides renaming it JD’s Bistro & Grille, Days Inn owner Linda Grother magicked it into a softly lit supper club with a baby grand and a reputation for prices as glittering as its ambiance.

Most recently known as JD’s Jazz Club, fans loved it but traffic dwindled.

Three years ago, Grother explained, “What I had decided in 2011 was if JD’s wasn’t financially successful in 5 years, I would close.”

In 2017, she sold the inn and bistro to Chris Patel, who owns other area hotels.

Patel has in turn leased the bistro to a new owner with a three-decade track record in upstate New York’s horse-racing hub, Saratoga Springs.

David Eger, who owned Gaffney’s gastropub there, has brought with him Chef Bobby Holt. Old friend Armistead Davis Mead III, now of Rotonda but owner for 27 years of the iconic Siro’s of Saratoga Springs, will act as consultant.

Eger plans to keep most of the existing JD’s staff, including Dawn Jagr as bar manager and current chef Kellen White.

The Grill’s smart new menu and hours leave no doubt that this is a different restaurant.

JD’s was open only for dinner and often seemed so unpredictably closed that passersby thought it had gone out of business. The Grill at 1951 is open for lunch and dinner every day.

And Eger is holding to his promise of a general lowering of prices without compromising quality.

One of JD’s dozen dinner entrées could have run from $24 for simple veggie pasta to $43 for rack of lamb. Many diners chose to munch on $9 to $16 appetizers instead.

THIS BUD’S FOR MITCH

“I didn’t want to keep doing the same old Bud’s routine,” he said.

Taranto makes his own delicate Caesar dressing, a beefed-up list of burgers, chicken parm sandwich, soup of the day including gumbo and breakfasts like bananas Foster French toast with butter rum sauce and Nonna Bianca’s stuffed Nutella pancakes. His breakfast Benedicts, with homemade Hollandaise, now include a San Fran Benedict with avocado and tomato, a Country Benedict on biscuits with sausage gravy and a Creole Shrimp Benedict that speaks for itself.

Every first Sunday of the month, from 10 a.m. to 2 p.m., they have live jazz and a New Orleans brunch where Taranto tries out new concoctions that often make their way onto the growing regular menu.

Six months in and Taranto couldn’t help but transform the place’s name and interior as well. After many 18-hour days working on the redo, he reopened Jan. 10 as Mitch’s Kitchen.

Which begs the question.

Taranto explained, “When our family came over from Italy, Ellis Island chopped their name down from Miceli to Mitchell. I learned how to cook from watching my grandfather, whose nickname was Mitch, in the kitchen.”

Those who remember the original Bud’s diner-style food will be pleased that not everything on the menu is new. Due to popular demand, Taranto has returned its liver and onions to the Mitch’s Kitchen bill of fare.