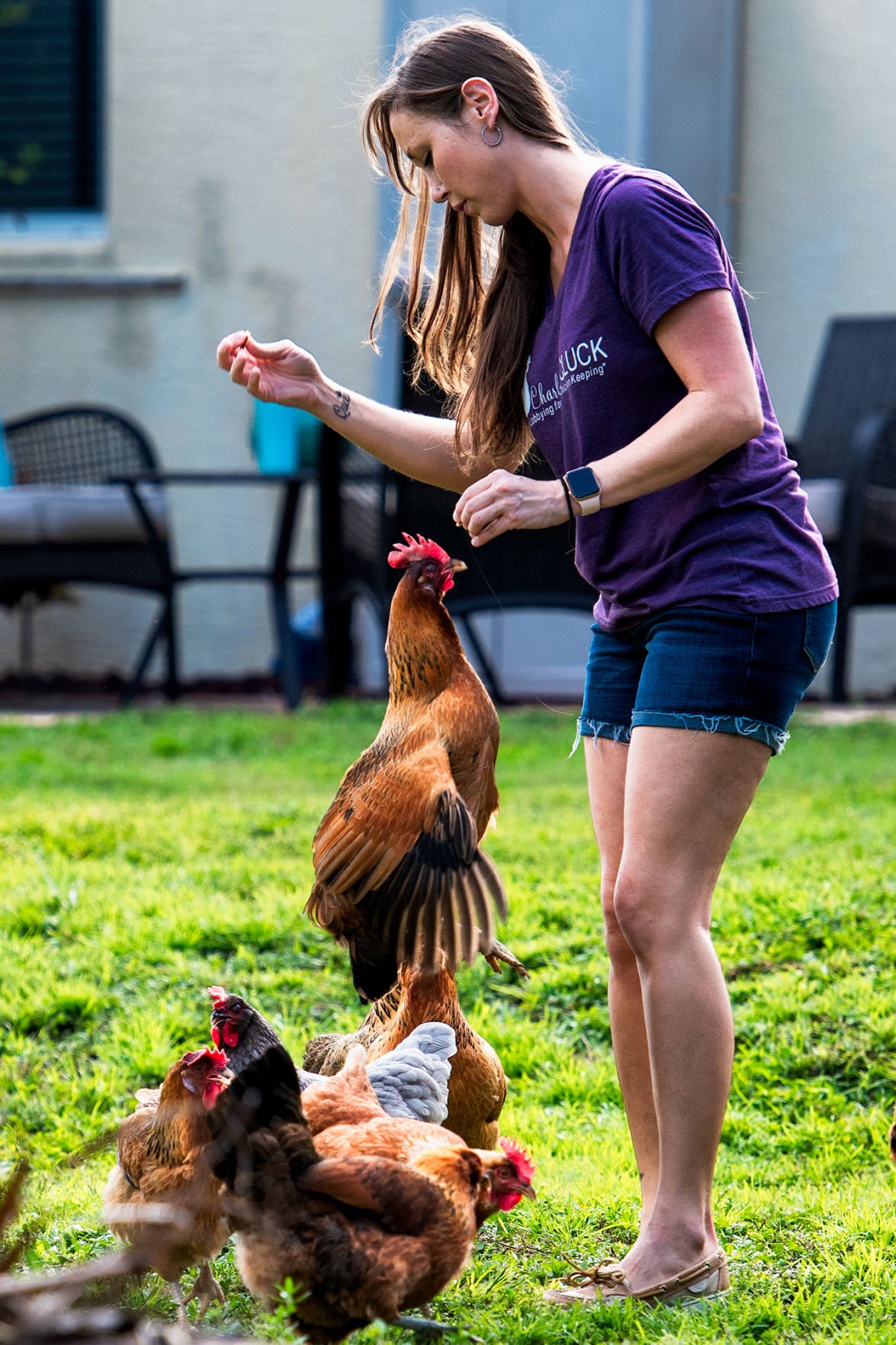 Melissa Aniskewicz taught her chicken, Heather, to jump on command. 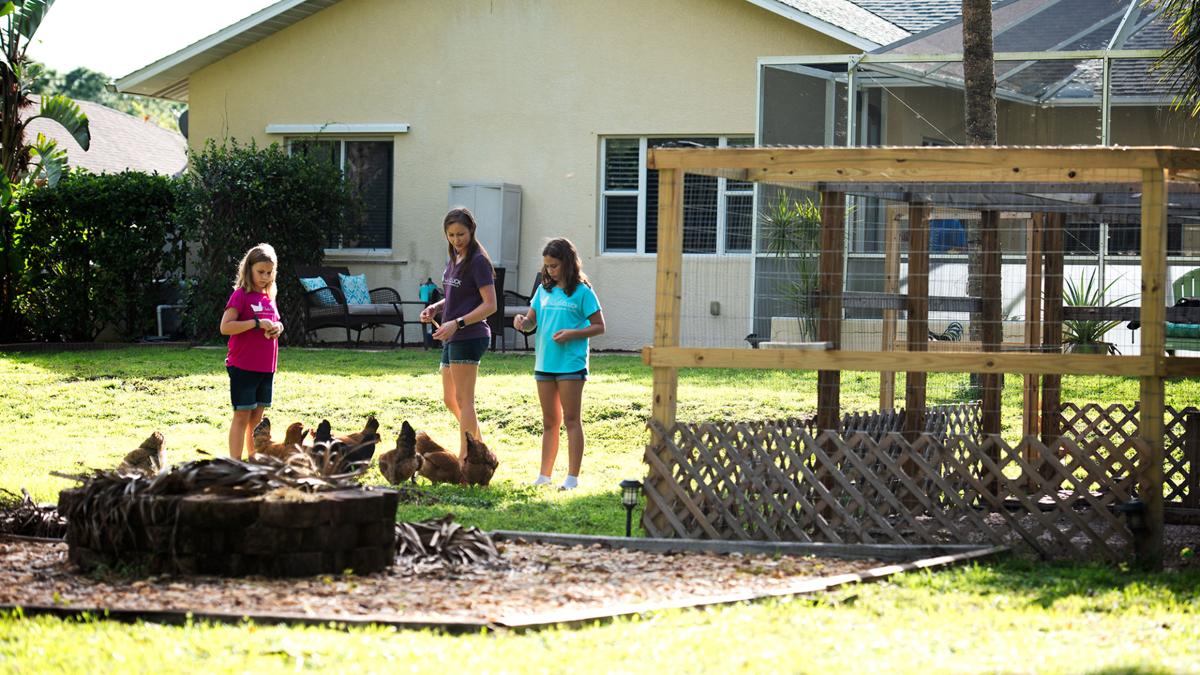 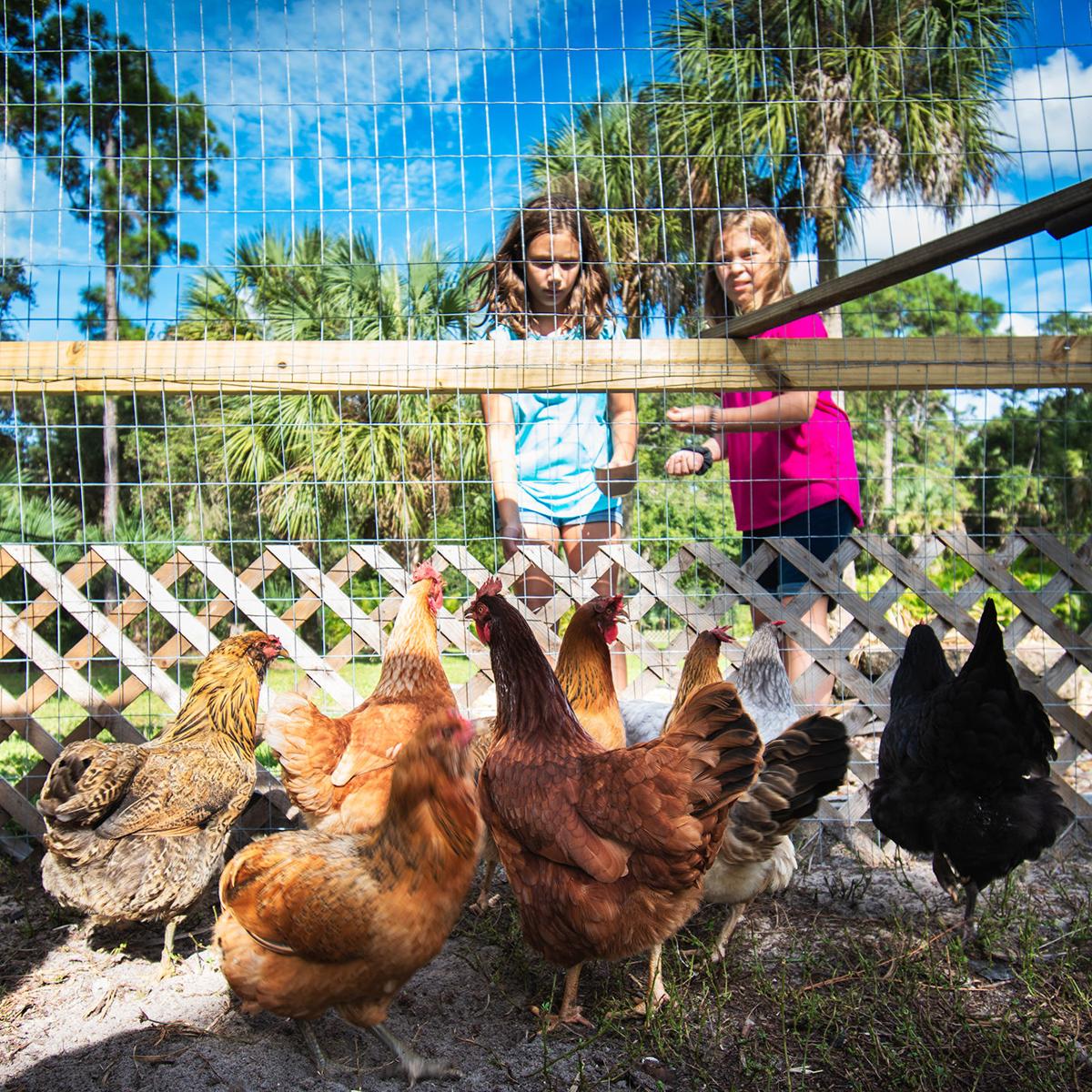 Elyssa Drayer, 10, and Emilee Drayer, 9, look at their chickens in their backyard in Port Charlotte. 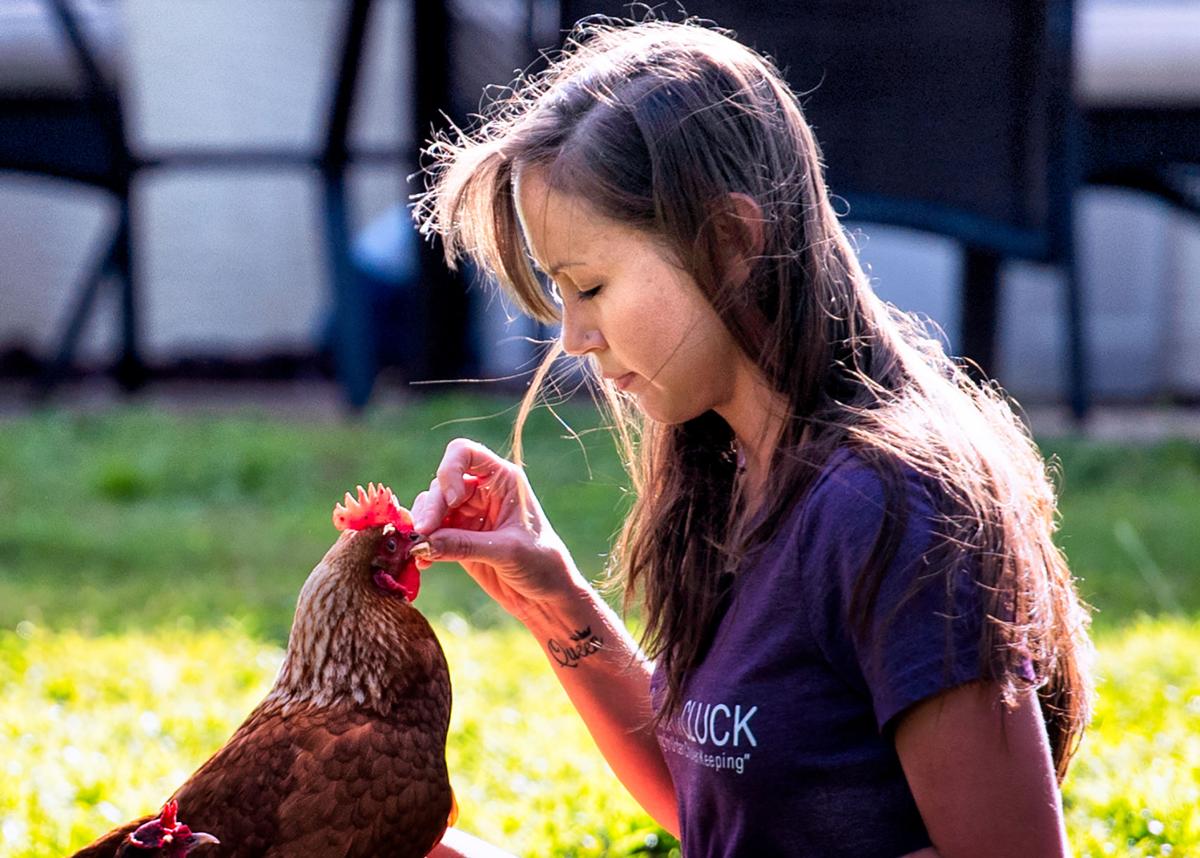 Melissa Aniskewicz feeds Trixie the chicken in her backyard. 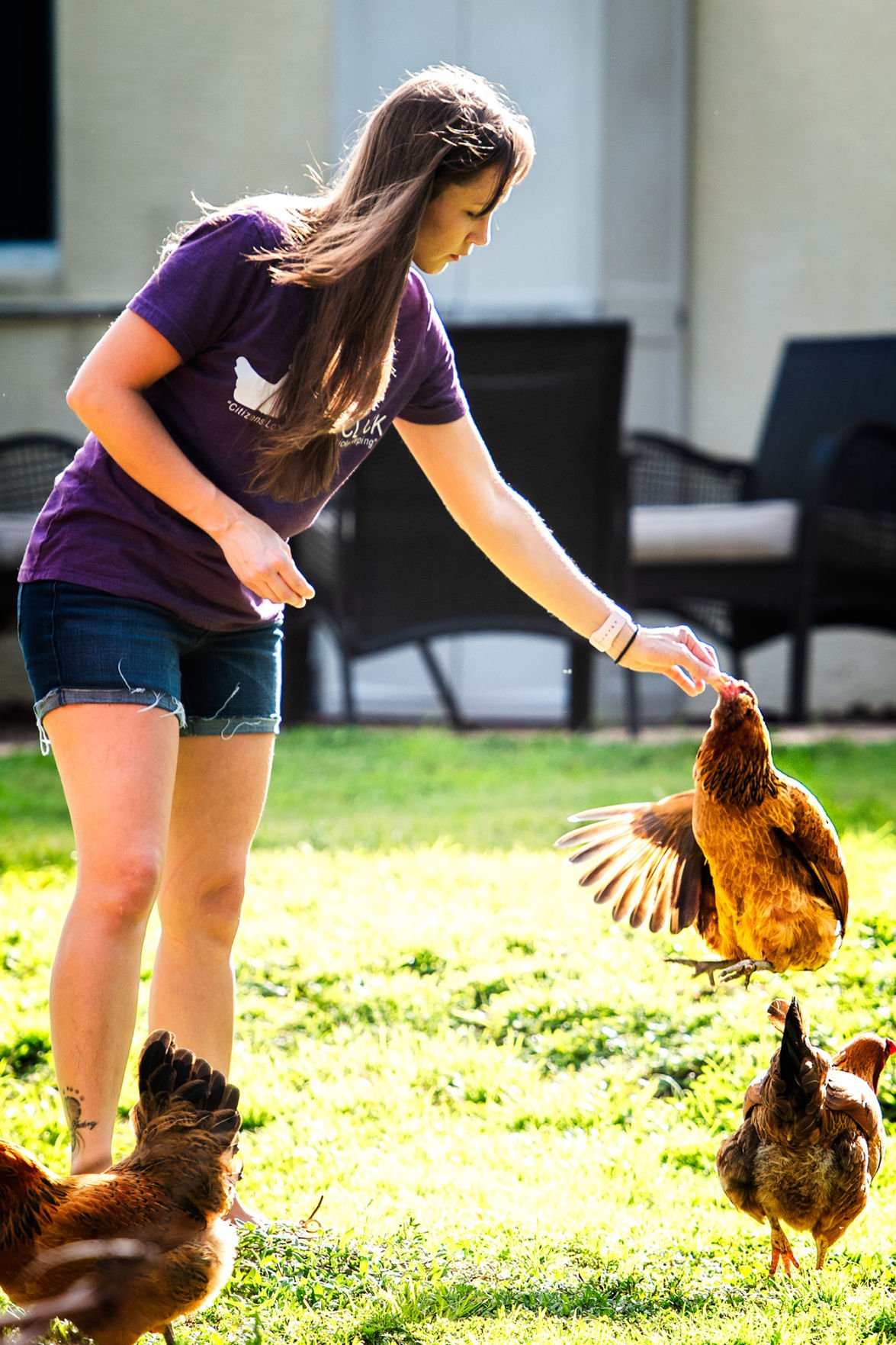 Dixie the chicken can also jump on command, when Melissa Aniskewicz prompts her with bread. 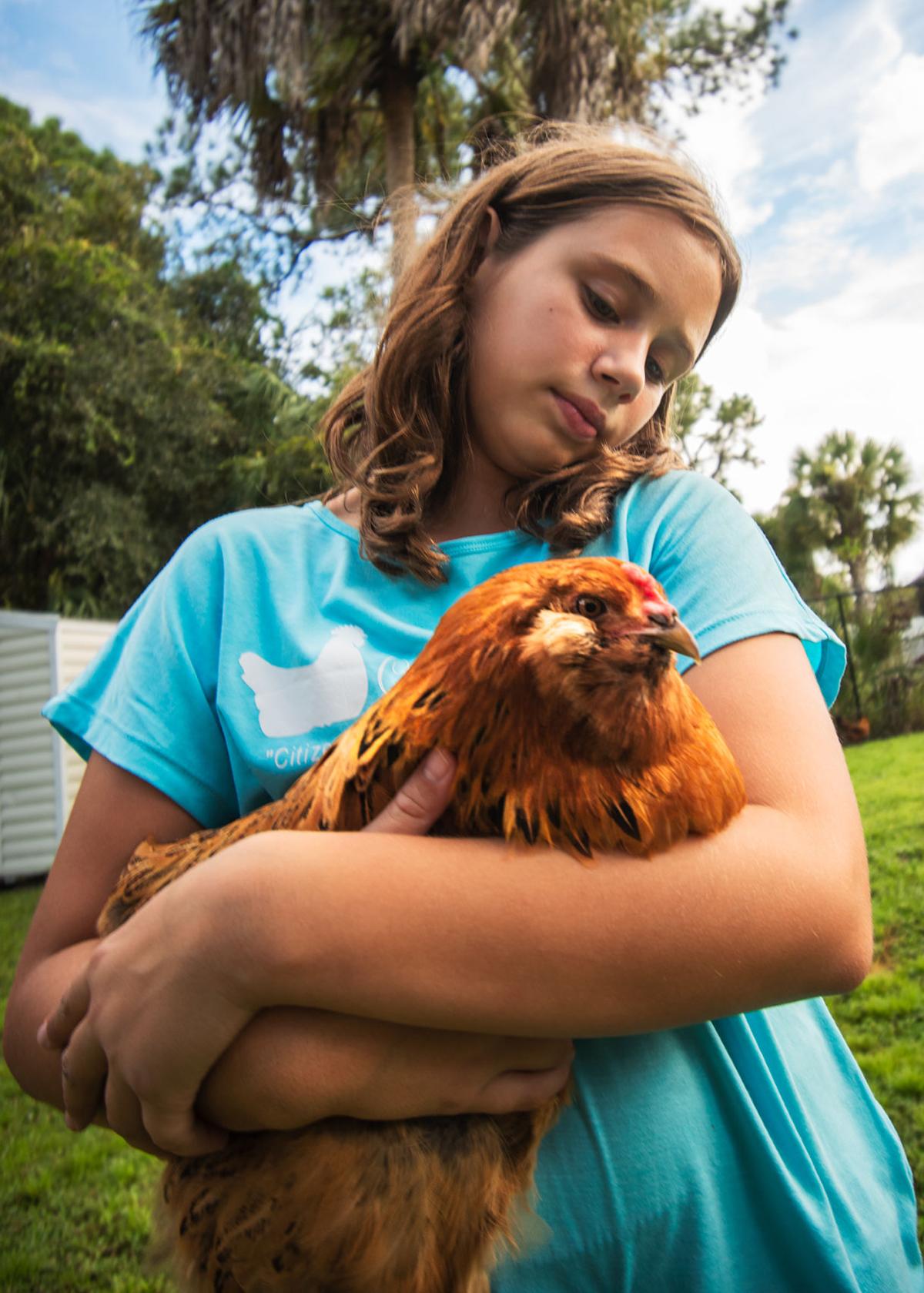 Elyssa Drayer, 9, holds Ellie, one of the chickens living in her backyard. 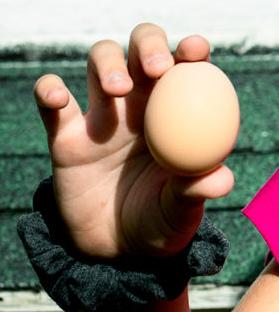 Emilee Drayer, 9, recently holds a fresh egg, produced by chickens that live in her backyard in Port Charlotte.

Melissa Aniskewicz taught her chicken, Heather, to jump on command.

Elyssa Drayer, 10, and Emilee Drayer, 9, look at their chickens in their backyard in Port Charlotte.

Melissa Aniskewicz feeds Trixie the chicken in her backyard.

Dixie the chicken can also jump on command, when Melissa Aniskewicz prompts her with bread.

Elyssa Drayer, 9, holds Ellie, one of the chickens living in her backyard.

Emilee Drayer, 9, recently holds a fresh egg, produced by chickens that live in her backyard in Port Charlotte.

The hens live in a 300-square-foot enclosure, with built-in nests to lay their multi-colored eggs, along with room to walk and jump, lit by solar string lights in their half-acre Port Charlotte lot.

Aniskewicz and her boyfriend, Rob Horton, spent weeks building the coop for the first six chickens they bought.

“It gets the kids outside,” Horton said, “I thought it’d be a good family activity.”

Horton, Aniskewicz and her two kids, Emilee, 9, and Elyssa Drayer, 10, eat fresh eggs, some blue and others brown, almost every morning, usually scrambled. They even give excess eggs to their neighbors.

When everyone gets home, the family occasionally lets their 10 chickens wander their fenced-in yard. By dusk, the chickens strut back in their enclosure, ready to go to bed.

However, Aniskewicz received a letter from Charlotte County’s Code Compliance Division July 31 saying having chickens is a “prohibited use of the property,” and therefore violating one of the county’s codes. The county requested she remove her chickens from the property within 10 days of receiving the letter.

Residential single-family lots are allowed to have pets, and Charlotte County Animal Control’s definition of domestic animals includes goats, sheep, dogs and poultry. Only breeding, boarding, and training is prohibited.

“There was nothing saying you couldn’t have (chickens),” Aniskewicz said.

However, the county contends chickens fall under livestock, which is allowed only in agricultural districts.

Aniskewicz created Charlotte CLUCK, or Citizens Lobbying for Urban Chicken Keeping, to fight for code changes so residents can keep their beloved pet chickens in their homes, in their backyards, with fresh eggs to eat in the morning.

Chickens are welcome in Sarasota County

Aniskewicz is modeling her movement after Sarasota CLUCK, which successfully convinced commissioners to pass the ordinance with a four-to-one vote Oct. 10, 2016. However, this victory took years to cultivate.

Jono Miller, the founder of Sarasota CLUCK, created the group in 2009 while having 25 chickens in his backyard illegally.

“I knew chickens weren’t a neighborhood killer,” Miller said, having raised chickens as a kid. He received tremendous support, with roughly 47 people showing up to his first official CLUCK meeting, he said.

The group set their sights on the city of Sarasota, working with staff until, eventually, the city commission amended their ordinances February 2011 to allow backyard chickens in residential areas. After a three year probationary period, the city of Sarasota voted unanimously Feb. 18, 2014 to permanently allow chickens.

The next step was tackling Sarasota County. The county commission started exploring allowing backyard chickens May 10, 2016, basing their ordinance after the City of Sarasota.

Five months later, the ordinance was adopted, allowing residents to keep as many as four hens in their backyards with a movable coop.

“The idea is that if a coop can be moved, if one neighbor has a lot of heartache, you can move it to the other part,” Miller said. Plus, this type of coop makes it easier, and more comfortable, to move the hens during a hurricane.

Not just winging it

In 2014, a conditional section was added to Charlotte County code, allowing chickens in residential zones if used for 4H, Future Farmers of America and similar organizations. This requires official documentation and only three chickens, no roosters, in a pen at least 10 feet from property lines.

Since her violation, Aniskewicz signed up two kids in her home. They attended their first meeting Sept. 11, where the group’s leader said they have more people this year than they have had in a very long time.

“I do know many people have joined (4H) for the security of being able to keep their chickens,” Aniskewicz said.

Many of these are through the Charlotte County Board of County Commissioners. Citizens can speak to the board on any topic during citizen’s input, prompting a discussion to be added to the agenda. This is how Sarasota CLUCK did it.

Citizen’s input takes place at 1 p.m. on the second board meeting of the month, according to Gleason. Citizens can also email board members at assistant@CharlotteCountyFL.gov or call 941-743-1300.

However, Gleason is doubtful any route involving the board will yield the amendment Aniskewicz wants.

“It’s not really something that’s going to change,” Gleason said, with the issue having been raised multiple times throughout the years. “The board’s position has been they’re not going to change this ordinance.”

Aniskewicz hopes this time the board will change its mind.

“Even our neighboring counties have amended their residential ordinance to allow chickens,” she said. “Times have changed.”

If the commissioners do not adopt the ordinance, citizens can go around the board by going through a formal petition process. The petition must be submitted and approved by the supervisor of elections, then the petitioner has six months to obtain signatures from at least 10% of eligible voters.

The board will then hold a public hearing on the proposed ordinance and vote. If it is not adopted, the issue will be placed on the general election ballot to be voted on, according to Charlotte County statute.

The county has had 10 chicken code cases since 2016, according to Gleason.

Charlotte CLUCK currently has an online petition with 1,160 signatures as of Tuesday.

The online petition, though, “has no legal standing,” Gleason said.

“Charlotte CLUCK is the voice for all chicken owners, chicken lovers, and chickens of Charlotte County,” Aniskewicz said.

Aniskewicz ideally wants an ordinance allowing up to five hens on a lot in residential zones, with the coop containing at least four square feet per fowl. The ordinance would prohibit roosters, the slaughtering of chickens or the sale of eggs.

“(Chickens are) very easy to take care of,” Aniskewicz said, teaching some to jump on command. “Any age can handle them ... they’re low maintenance and can’t hurt you.”

To learn more about Charlotte CLUCK, visit their website at www.charlottecluck.com or their Facebook page at www.facebook.com/CharlotteCLUCK.

Where can you keep backyard chickens?

Chickens are a prohibited use of single-family residential areas unless used for organizations such as 4H, FFA and similar programs.

To have chickens with an organization, official documentation showing proof of participation must be submitted to the county and the uses/activities must cease at the completion of the program.

Up to three chickens are allowed. The pen has to be at least 10 feet away from the side and rear property lines in the backyard.

Failure to comply with a notice of code violation may result in the offending party being brought before the code enforcement special magistrate, who, upon determining a violation exists, may charge a fine up to $50 a day for each day of noncompliance after a courtesy compliance period.

Chickens are allowed in residential areas when pre-approved by the Development Director.

The chickens must be kept in an enclosed area that is at least 6 feet tall and at least 5 feet from the back and side property lines.

Anyone who wishes to own a chicken in a residential zone must grant the county the right to inspect their property for compliance.

Up to four chickens are allowed in single-family residential areas.

Chickens must be kept in a movable, covered enclosure. There should be at least four square feet per chicken in the coop. The enclosure cannot be kept in the front or side yards.

The sale of eggs or other chicken products is prohibited. Residents are not allowed to slaughter their chickens.

"I knew chickens weren't a neighborhood killer." - Jono Miller, who helped get change in Sarasota County.

"I do know many people have joined (4H) for the security of being able to keep their chickens."  -Melissa Aniskewicz said after her violation.

"The board's position has been they're not going to change this ordinance." -Charlotte County spokesperson Brian Gleason.

A total of 1,003 people have been infected with Salmonella in 49 states, the Centers for Disease Control and Prevention reported Aug. 30.

Evidence indicates that contact with backyard poultry, including chickens and ducks, are the likely sources of these outbreaks. People can also contract the infection through dogs, cats, ferrets and fish, according to the CDC.

Here's how to stay healthy with your backyard flock:

VOTE - Should Charlotte County change its ordinance on backyard chickens?