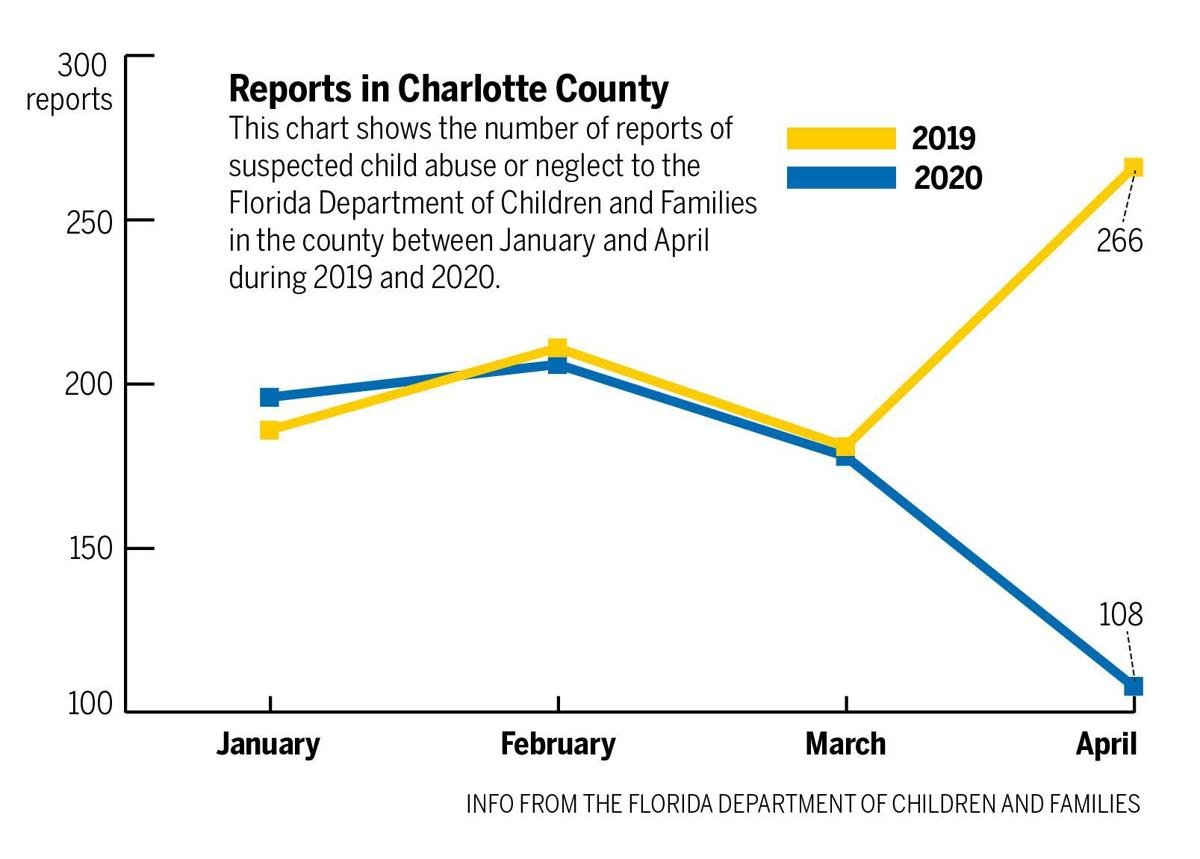 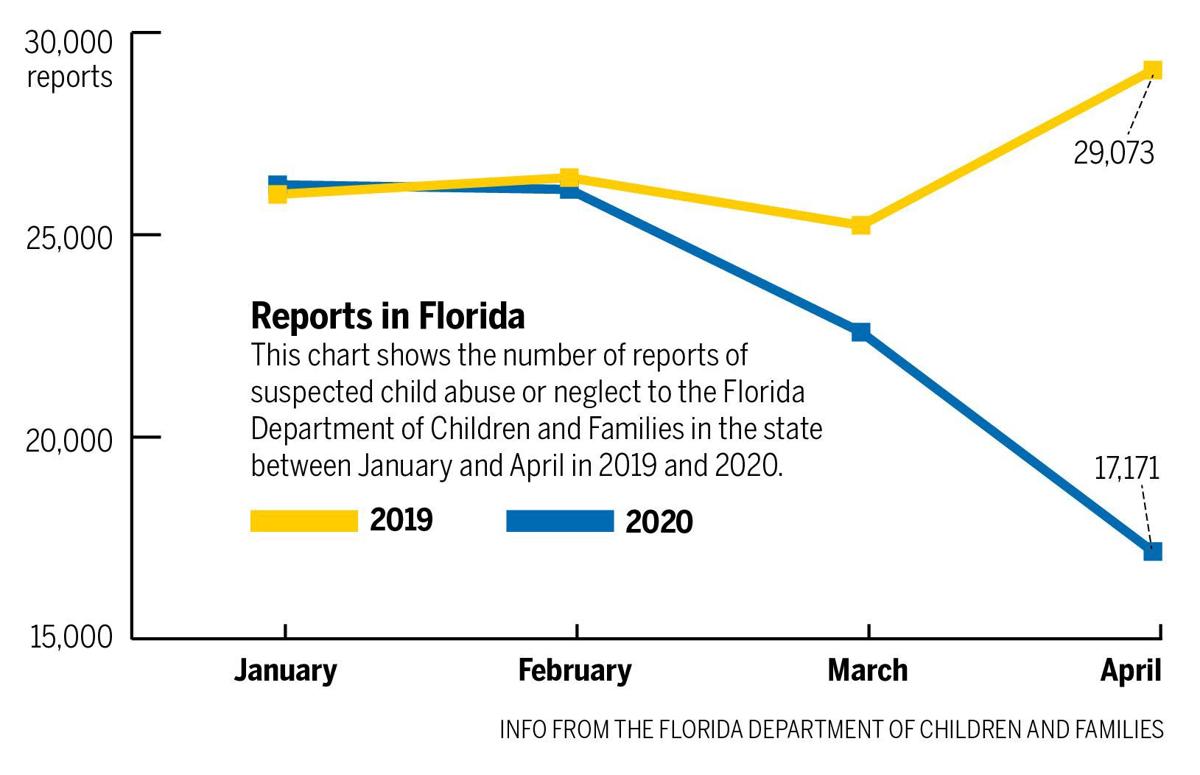 At a home in Punta Gorda, deputies found a young girl covered in bug bites and a rash while wearing a diaper overflowing with urine.

The filthy home reeked of feces, moldy food and cigarette butts. Facing the girl’s booster seat was a table covered in white powder from drugs, according to records from the Charlotte County Sheriff’s Office.

Deputies stumbled upon the situation June 13 because they were searching for the girl’s mother, who had a warrant for her arrest. Both parents were arrested for child neglect, along with other charges.

If deputies hadn’t been sent to the house in search of the mother, the child might still be in a house where the adults were allegedly using meth.

Experts say that many neglect or abuse cases are going undiscovered right now.

But that doesn’t mean fewer children are being abused.

When Florida schools shut down in mid-March, kids stopped seeing their teachers — who are trained to look for and report signs of child abuse.

“Quite a few reports come from professionals at schools mostly because they’re trained in what to look for, and kids spend a lot of time at school,” said Nathan Scott, child welfare policy coordinator with the Family Safety Alliance. “During COVID-19, they haven’t been at school, so that’s been a contributing factor (in the decline in reports).”

People who are required by law to report child abuse include professionals such as educators, health professionals and social workers — anyone who has contact with the child as part of his or her job.

The vast majority of reports come from these mandated reporters — especially teachers, who produced 21% of the 4.3 million referrals made in 2018, according to the U.S. Department of Health and Human Services.

In April, the Department of Children and Families received 108 reports of suspected child abuse in Charlotte County. In April of last year, more than twice as many reports were made. The last time the number of cases was as low as April 2020’s was in June 2011.

“We’re not just seeing a normal and expected reduction because of the absence of interaction with mandated reporters — I’m worried that we’re actually in a time where we’re seeing an increase in child abuse,” said Jeff Temple, professor and psychologist at the University of Texas Medical Branch and director of the Center for Violence Prevention. “When we see increased stress, we see increased abuse, whether it’s to a partner or to a child.”

Without schools, camps and regular doctor’s appointments, children are with their parents now more than ever. And about 80% of perpetrators are parents, according to the U.S. Department of Health and Human Services.

The decline in child abuse reports spurred on by the onset of the coronavirus lockdown is not only a phenomenon in Charlotte County, but a statewide and nationwide trend as well.

In April, 17,171 child abuse reports were made to DCF across Florida. The state hadn’t seen an intake number that low in more than 10 years. In April of last year, 29,073 cases were reported.

In the U.S., many families are facing the stress of the coronavirus pandemic, which has also caused housing insecurity, food insecurity and financial insecurity. The closures of schools and childcare facilities have forced children to be closer to adults who may be unsafe. On top of that, the nation is experiencing the anxiety of recent concerns brought to light regarding the racial equity and anti-racism measures in the U.S.

“If the schools had never closed down, I would expect to have seen an increase in child abuse reporting given the stress,” Temple said. “But we’re not seeing the normal amount, and I would have expected to see more, which is even more scary.”

Gov. Ron DeSantis announced May 22 that youth activities, including organized sports, were allowed to resume after two months of lockdown to curb the spread of the coronavirus. Florida saw a slight increase in reports to DCF in May, up to 19,110 reports, though not close to last May’s total of 28,292.

Charlotte County also saw a slight uptick in May, while Sarasota’s intakes to DCF decreased and DeSoto County plateaued.

“Of course the goal is to prevent any type of abuse,” Claudette Bennett, public information officer for the Charlotte County Sheriff’s Office, wrote in an email. “The Sheriff’s office investigates all reports or claims of child abuse thoroughly. We encourage all community members to report any signs or suspicion of child abuse, abandonment, or neglect regardless if they are mandatory reporters or not.”

Because schools and other facilities where children come into contact with mandatory reporters are largely closed, the responsibility falls into the hands of anybody who sees a child, whether at a grocery store, a park or in the neighborhood, Scott said.

Unlike other states, Florida law requires any person who knows or has reasonable cause to suspect that a child is being abused or neglected by a parent or caregiver to report it to the Florida Abuse Hotline.

“During times of uncertainty and stress like this, we encourage all Floridians to be vigilant and aware of the signs of child abuse,” said Natalie Harrell, a DCF spokesperson, in a prepared statement. “Historically, when children are on breaks from school, like summer vacation, the hotline tends to receive fewer child intakes, as their teachers — who are mandatory reporters — no longer see them on a daily basis.”

Signs and symptoms of abuse and neglect include bruising, bites, burns, broken bones or black eyes. It can also include consistently dirty or severe body odor, apparent lack of supervision considering the age of the child, difficulty walking or sitting, or demonstrating unusual sexual knowledge or behavior, according to the Florida Department of Health.

“If folks reasonably suspect something is off, it’s better to call in a report than to not,” Scott said. “There’s no penalty for reporting. People should make any calls if they feel in their gut something is off.”

Anybody who suspects child abuse or neglect should call 1-800-962-2873 or report online by visiting: reportabuse.dcf.state.fl.us.