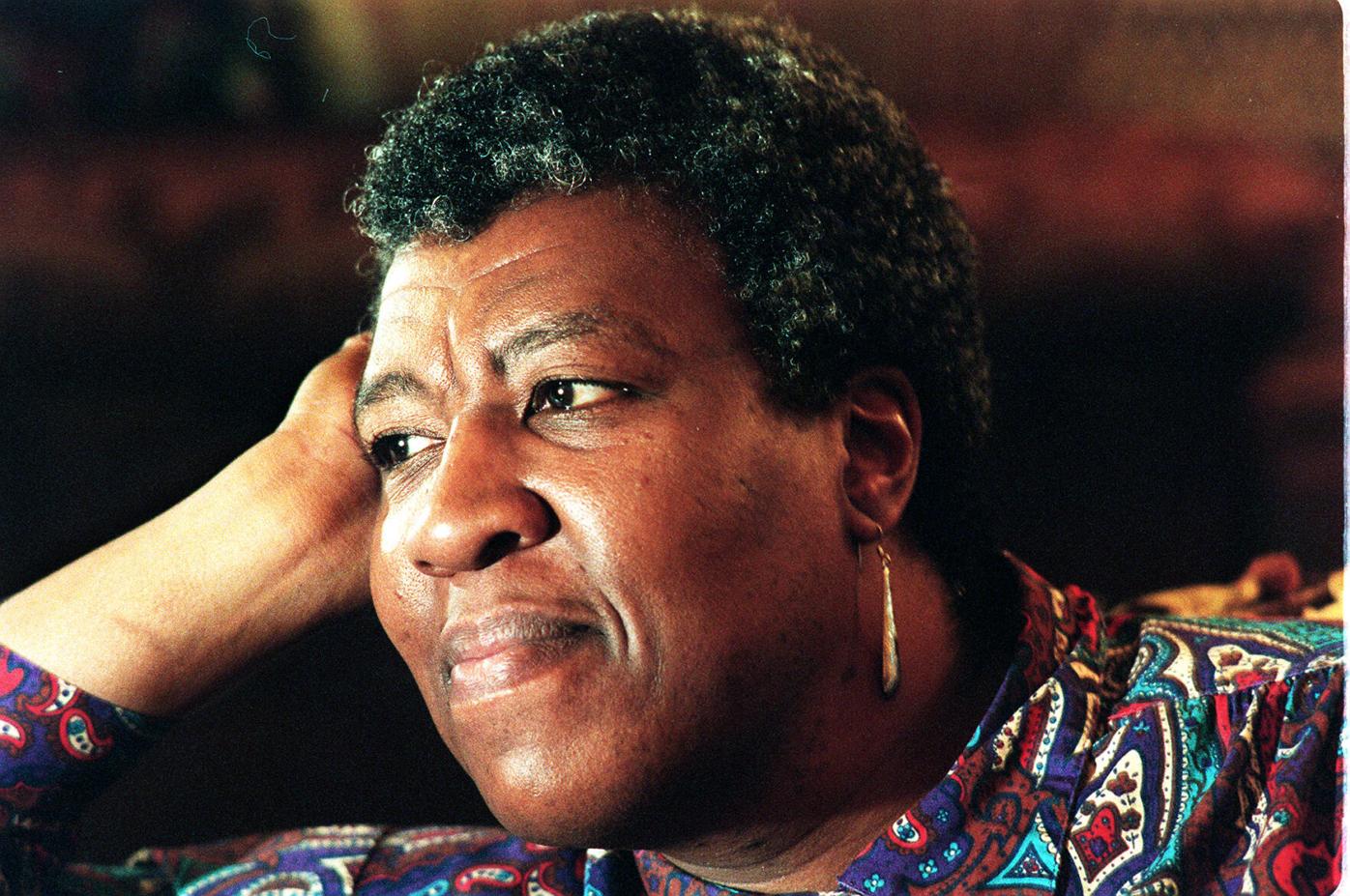 Science-fiction author Octavia E. Butler's book "Parable of the Sower" has gained attention in recent months and made two book lists. Two TV series are in the works based on her novels "Wild Seed" and "Dawn."

addresses many traditional themes in her writings, but adds sophisticated portrayals of racial issues. Her latest book is ""The Parable of the Talents."" (TB) AP PL KD 1998 (Horiz) 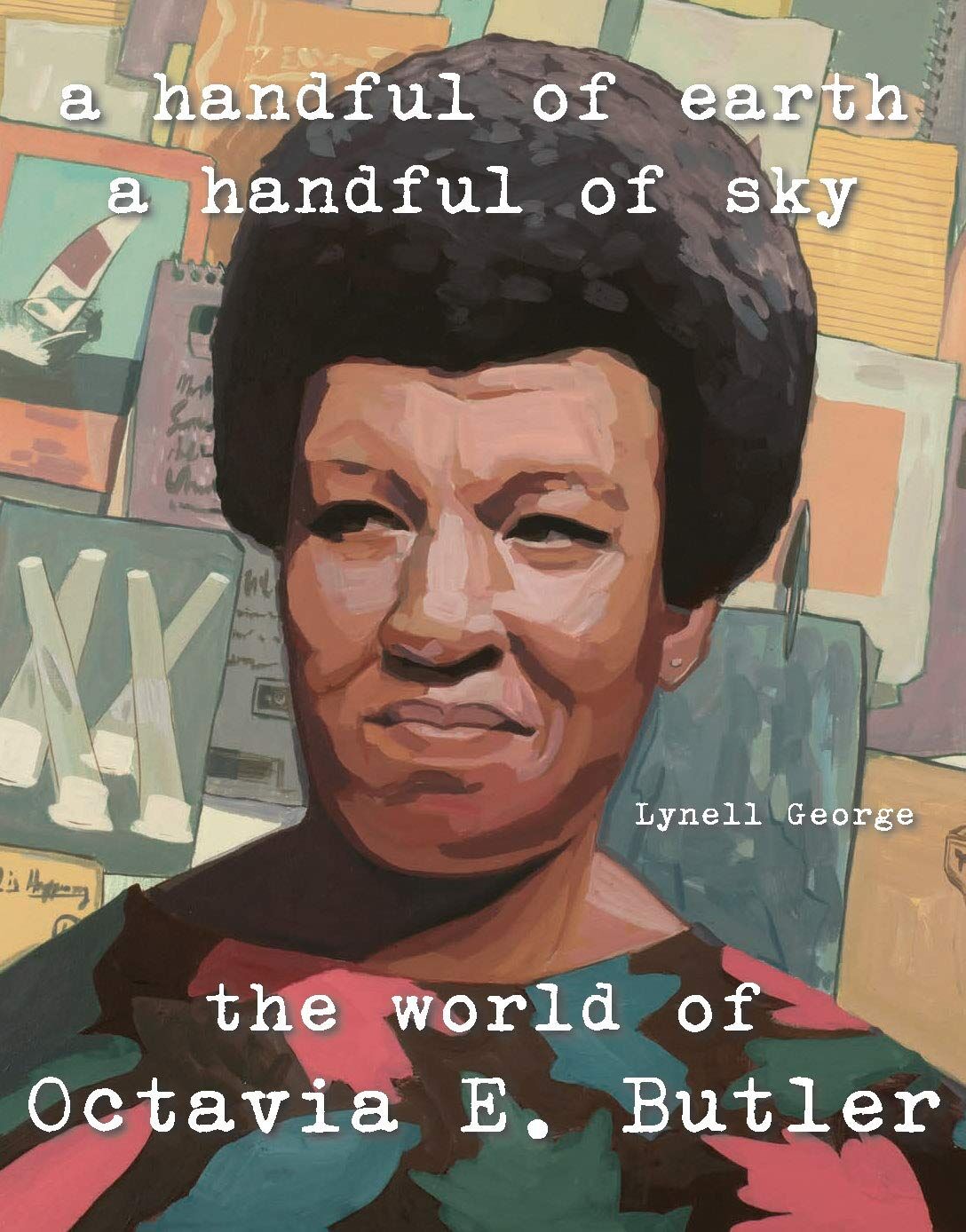 This month, journalist Lynell George will publish a new book on the author’s life and perspectives titled “A Handful of Earth, A Handful of Sky: The World of Octavia E. Butler.” 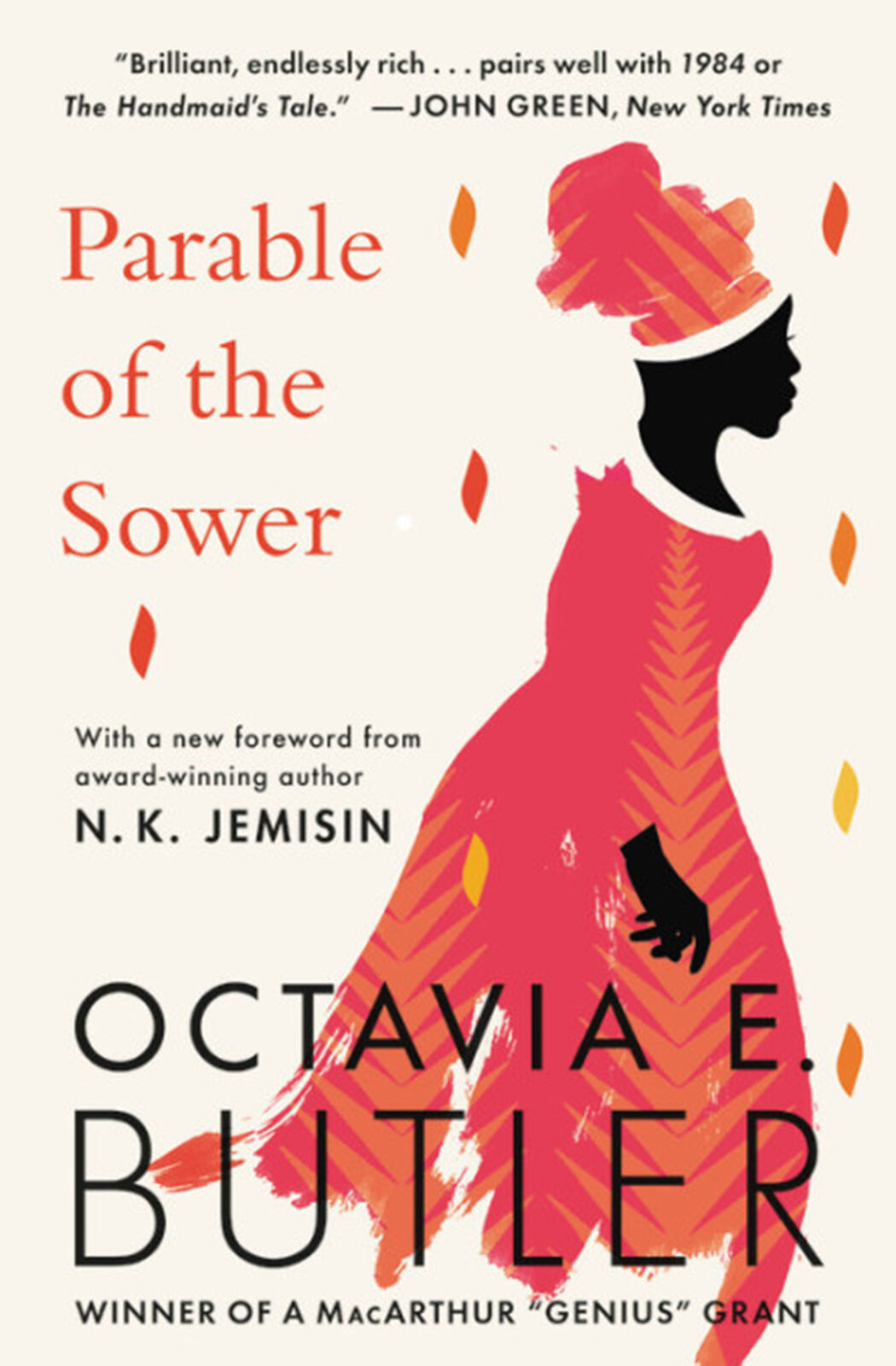 “Parable of the Sower,” by Octavia E. Butler. This book has regained popularity in recent months. 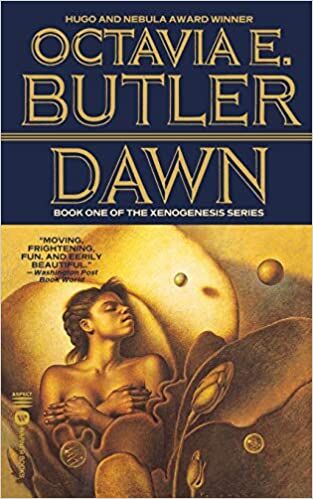 “Dawn” is part of the Xenogenesis trilogy by Octavia E. Butler. It is one of two novels by the author being developed for a TV series. 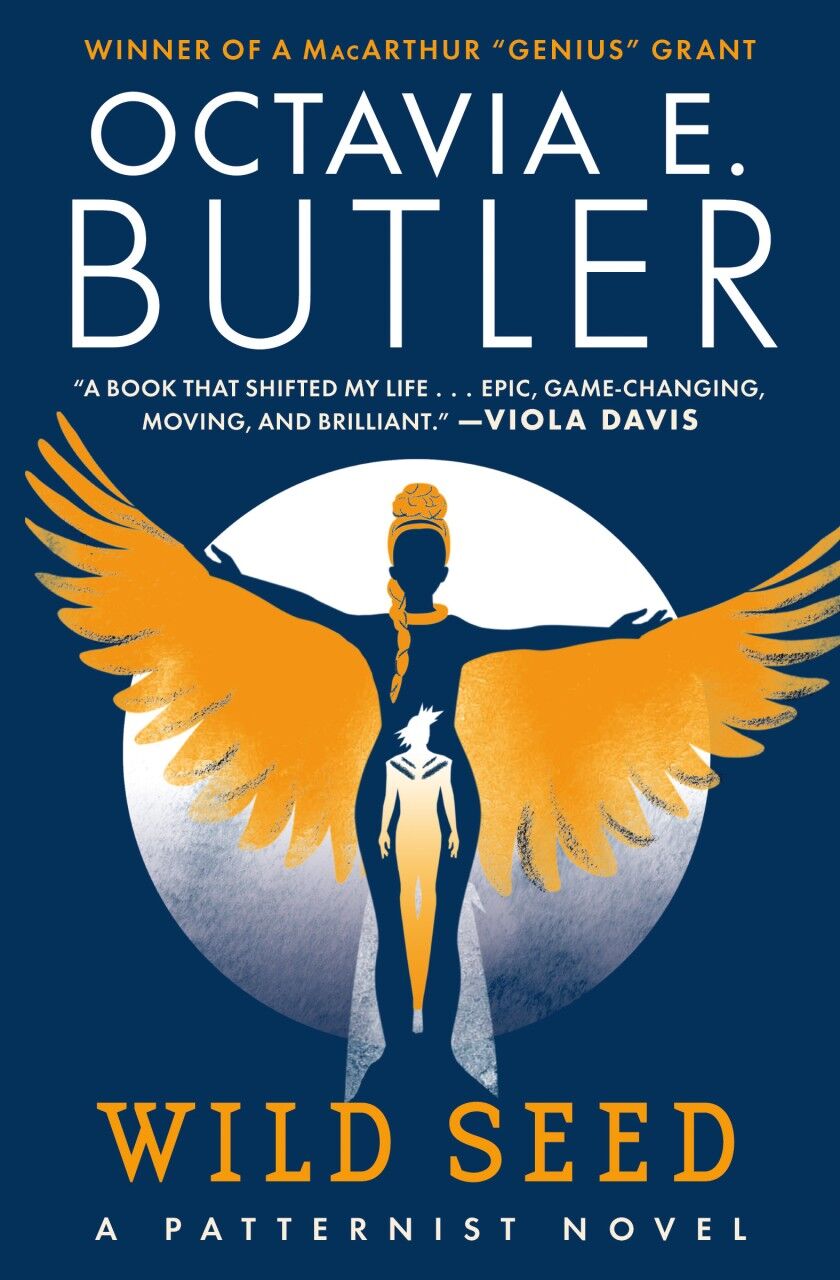 “Wildseed” by Octavia E. Butler is one of two novels by the author being developed for a TV series. It is part of her Patternist book series.

LOS ANGELES — Science fiction writer Octavia E. Butler said the novels in her “Parable” series were meant to be cautionary.

Her 1993 “Parable of the Sower” follows Lauren Oya Olamina, a teenager born with “hyperempathy syndrome” who lives in a walled community outside of Los Angeles in the 2020s. Butler envisioned a world ravaged by climate change and economic injustice where people are just scraping by to survive.

Butler’s prescient novel has surged in popularity in recent months as people have sought ways to make sense of the current chaos of the real world. “Parable of the Sower” appeared on the New York Times Best Sellers list for the first time in September and has landed on the Los Angeles Times Bestsellers List too.

This renewed interest in Butler’s work has been particularly timely. The Huntington Library, Art Museum, and Botanical Gardens — which is home to Butler’s archives — announced a new fellowship in the author’s honor in August. Two TV series are in the works based on her novels “Wild Seed” and “Dawn.”

This month, journalist Lynell George will publish a new book on the author’s life and perspectives titled “A Handful of Earth, A Handful of Sky: The World of Octavia E. Butler.”

Born in Pasadena in 1947, Butler died in 2006 without finishing the third book in her “Parable” series. Although she may not have dominated the bestsellers list in her lifetime, the MacArthur “genius” grant winner was recognized with multiple Nebula and Hugo awards during her career. Her work was notable for engaging with issues such as race, gender, sexuality, power and the environment through the prism of sci-fi.

“Parable of the Sower” is the first installment of the unfinished trilogy. Lauren’s story continues as she develops and builds a community around her new beliefs in “Parable of the Talents,” published in 1998.

Here is a quick guide for budding Butler enthusiasts trying to decide what to read after finishing the “Parable” series. While this guide is based on a defining sci-fi convention of the work, Butler’s stories always involve a deeper exploration of societal issues.

For those interested in special powers: The Patternist series

In a distant future, humans are split into three genetic categories — those with telepathic abilities, those mutated from an alien plague and ordinary humans. The Patternist series — comprised of “Patternmaster” (1976), “Mind of My Mind” (1977), “Survivor” (1978), “Wild Seed” (1980) and “Clay’s Ark” (1984) — is about how this world came to be. The series’ timetable does not correspond with the publication order of the books. Readers who choose to follow the order that Butler wrote the books should start with “Patternmaster,” which is chronologically the last in the series. Those who wish to follow the timeline established within the series should start with “Wild Seed,” which introduces the African immortals who start it all. “Wild Seed” is being adapted into a TV series produced by Viola Davis and Julius Tennon.

The Xenogenesis trilogy is set in a world where humans have made Earth uninhabitable through nuclear war. Lilith is one of the few human survivors saved by an alien race that wants to interbreed with them for both races’ survival. The trilogy includes “Dawn” (1987), “Adulthood Rites” (1988) and “Imago” (1989). A TV adaptation of “Dawn” from Victoria Mahony and Ava DuVernay has been announced.

One of Butler’s few standalone novels, “Kindred” is about a young Black woman and author who finds herself traveling between her present — 1970s Los Angeles — and the antebellum plantation of her ancestors. It is light on science fiction elements and is considered one of Butler’s more accessible novels.

Butler’s final novel, “Fledgling” follows Shori, a vampire who has no recollection of her past. Unlike the traditional supernatural version of the bloodsucking creatures, Butler’s Ina form a symbiotic relationship with their chosen human companions.

For a little bit of everything: ‘Bloodchild and Other Stories’

The only collection of short stories that Butler published before her death, “Bloodchild and Other Stories” includes brief afterwords by the author following each story. Among the standouts is “Bloodchild,” the Nebula- and Hugo award-winning title story about the relationship between humans who have escaped Earth and a race of insect-like aliens.

For those interested in the author’s inspiration, George’s upcoming book, “A Handful of Earth, A Handful of Sky,” takes readers to the Pasadena neighborhood where Butler grew up.

The book is not a standard biography. Based on her time researching Butler’s archives at the Huntington Library, George sheds light on the author’s life and writing process and how she created herself. The book includes snippets from Butler’s notes, lists and journals.

“To begin to fully grasp Octavia Butler,” George writes, “is to sink into the worlds from which she came. Southern California: the landscape, the people, the yearnings, the lean-struggle years and all of the other necessary bits and pieces that it took for her to collage together a public self.”

"To begin to fully grasp Octavia Butler, is to sink into the worlds from which she came." — Lynell George, author of  "A Handful of Earth, A Handful of Sky, The World of Octavia E. Butler."