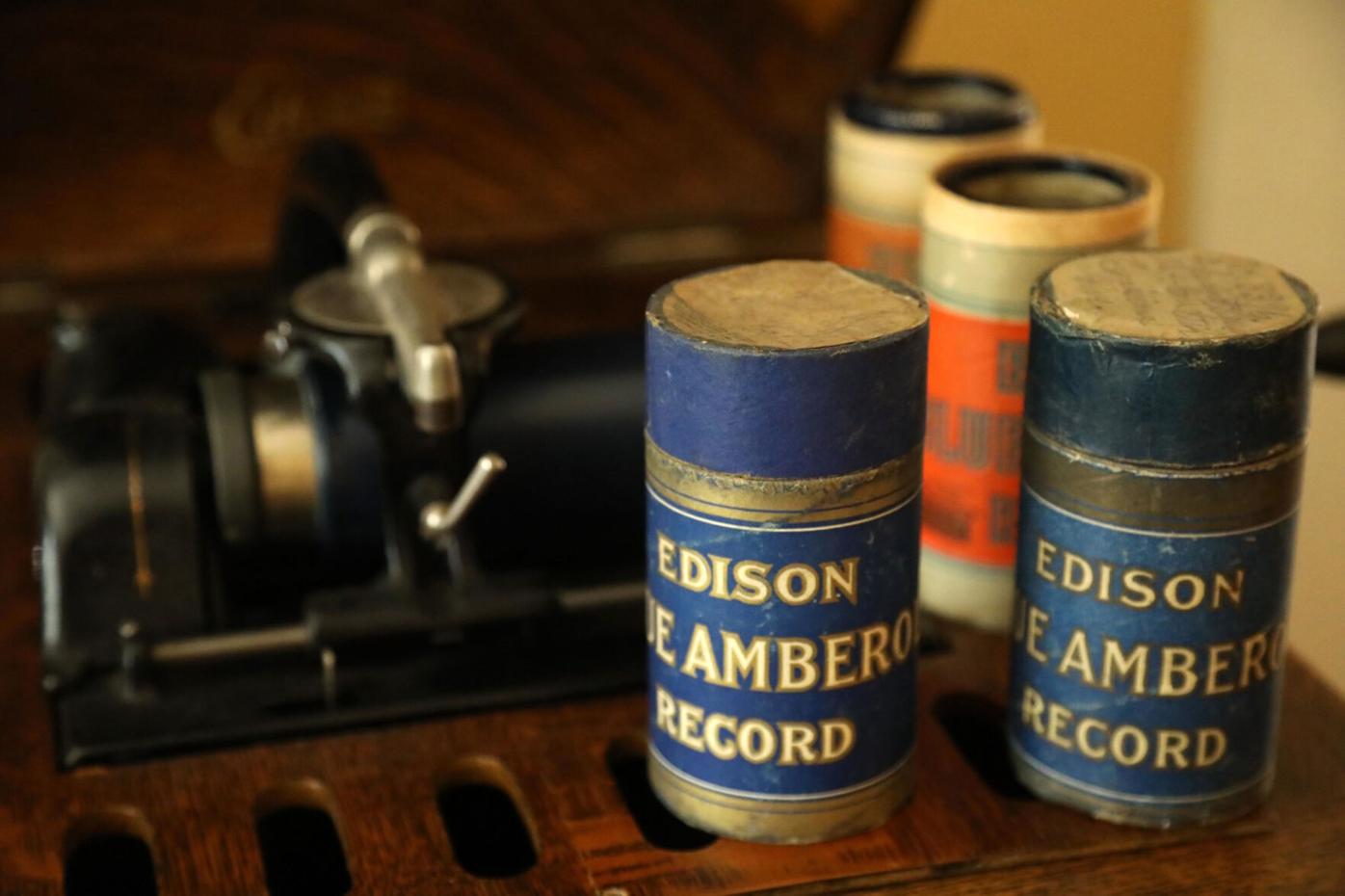 A pair of Edison Blue Amberol cylinder records at the home of UCSB curator David Seubert in Santa Barbara. 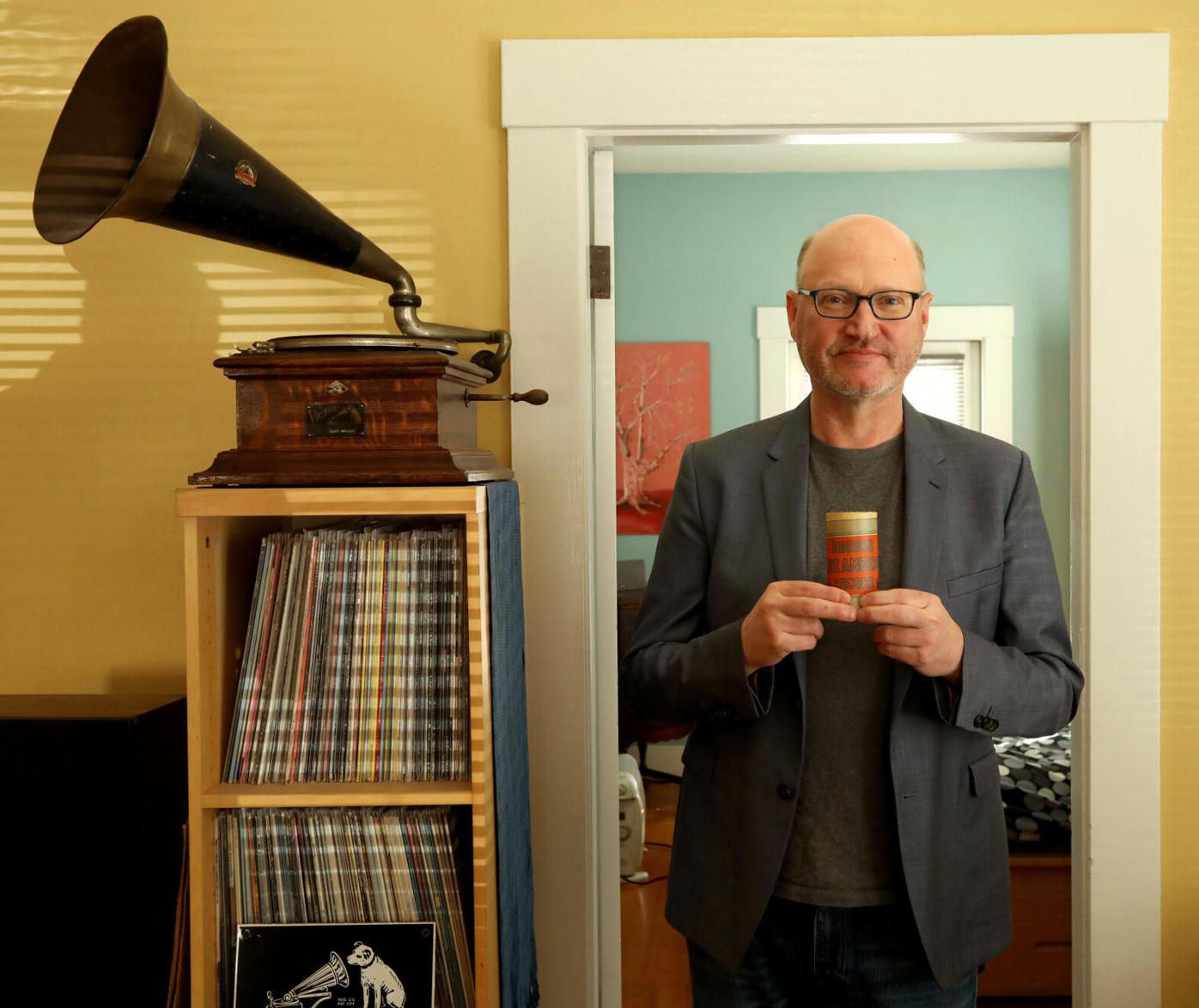 David Seubert, curator for Performing Arts Collection at UC Santa Barbara Library, holding an Edison Blue Amberol cylinder record, stands next to an antique Victor record player and some of his favorite vinyl at his home in Santa Barbara. Seubert runs the Cylinder Audio Archive at the university. 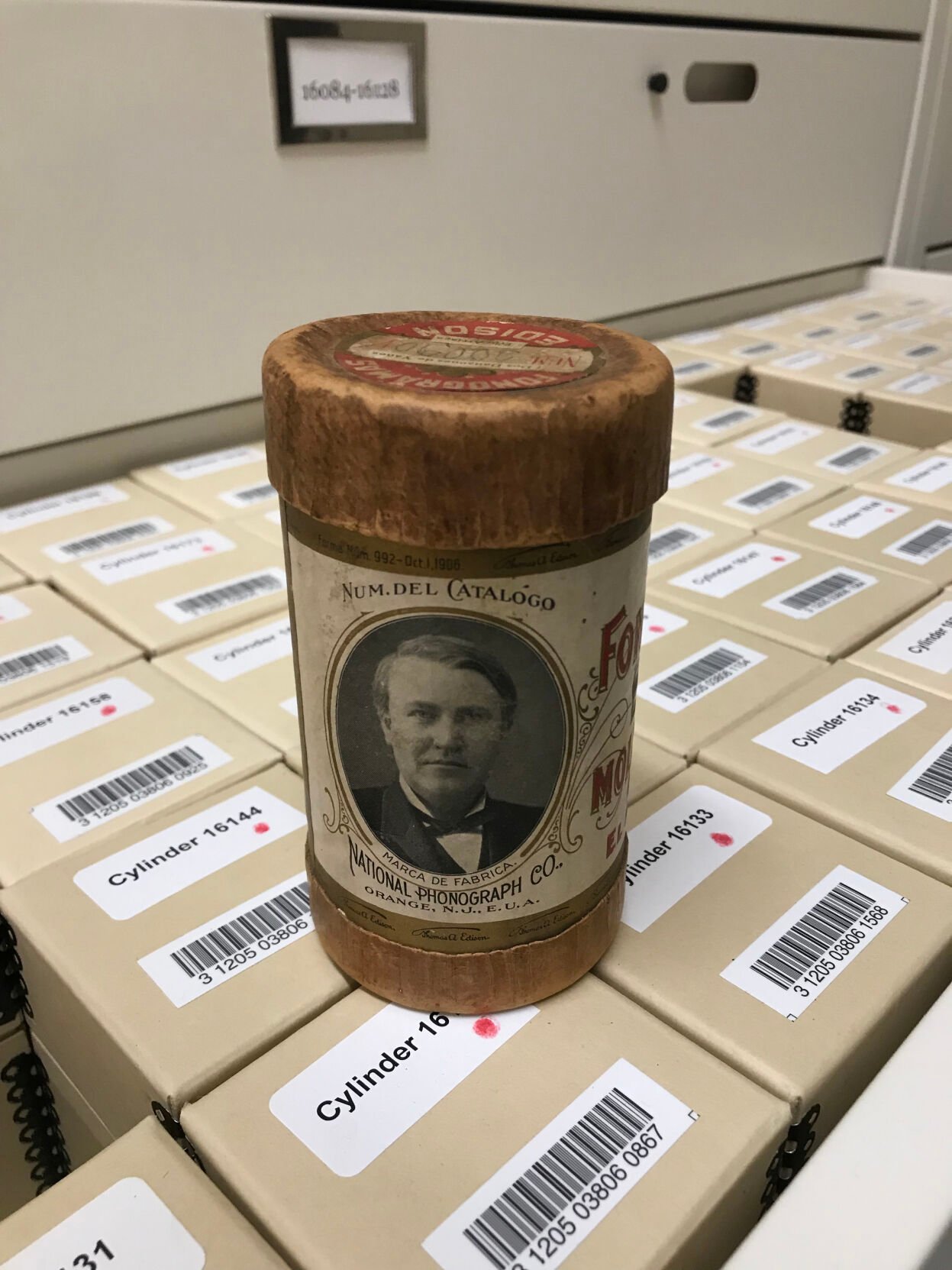 A pair of Edison Blue Amberol cylinder records at the home of UCSB curator David Seubert in Santa Barbara.

David Seubert, curator for Performing Arts Collection at UC Santa Barbara Library, holding an Edison Blue Amberol cylinder record, stands next to an antique Victor record player and some of his favorite vinyl at his home in Santa Barbara. Seubert runs the Cylinder Audio Archive at the university.

SANTA BARBARA, Calif. — Located in a wing of the UC Santa Barbara Library, about a quarter mile from the Pacific Ocean, the university’s collection of early music is the most extensive on the West Coast. Descend in an elevator a few stories underground with David Seubert, curator for the Performing Arts Collection at UC Santa Barbara Library, into the Cylinder Audio Archive, a windowless, climate-controlled storage facility purpose-built to hold wax cylinders and 78-rpm records and, after adjusting to the 10-degree temperature drop, a temple of sound awaits.

Say what you want about the millions of digital songs stored in the cloud and awaiting your Spotify spin. Strolling through the rows of shelving units, each packed with cylinder recordings, overwhelms the imagination. Writer Nick Tosches described listening to ancient minstrelsy songs on these formats as visiting a realm “where dead voices gather,” and you can almost sense the ghosts inside these vessels.

They’ll ferry you to a realm long gone: to Mexico City circa 1904, where the baritone voice of Rafael Herrera Robinson bellows as if born once again; to the 1908 campaign trail, where then-candidate William Howard Taft discusses the plight of Black Americans four decades after the Civil War’s end; or to 1909, when the United States Everlasting Indestructible Cylinders company dropped “Temptation Rag,” a hot little number by Fred Van Eps and Albert Benzler.

Under Seubert’s guidance, 10,000 of these cylinders have been digitized and made available for streaming and download — for free — at the archive’s online portal: there are string quartets, spirituals, musical theater and humorous recitations; Mexican corridos from 120 years ago; whistling songs, yodels, zarzuelas and minstrel music; polkas, sermons, waltzes, marches and rags.

Among the most important repositories of wax cylinder recordings in America, the archive under Seubert’s leadership has saved countless recordings from trash bins. Until the coronavirus shuttered the UCSB library, each month its archivists posted hundreds of otherwise unheard acoustic recordings from the late 19th and early 20th centuries.

The library’s archive was founded in the early 1970s as part of an audio preservation movement among a handful of librarians and academics across the country. Guided by the notion, Seubert explains, “that sound recordings were a primary source document that was important to historical research, the same way as newspapers and photographs and journals,” academic libraries at institutions including Stanford, Yale, the New York Public Library and the Library of Congress also committed to archiving physical recordings.

Seubert and UCSB hold an astounding collection of flat-discs and 78 rpm records, but since Seubert joined in the mid-1990s the institution’s outward-facing focus has been on cylinders. Back when he was getting started, he said, “if you were interested in the content that was trapped on them, aside from a few esoteric reissues out there, or private collectors trading cassette tapes, you couldn’t really hear it.” From an educational viewpoint, the idea was that students could learn about performance or historical music by listening to these old recordings.

In the decades since, Seubert’s curatorial instincts have come to define the holdings. “I love building the collection,” he said, adding that his major contribution has been in digitizing unheard sounds for the public to hear. By the time he retires, “it’s going to be the largest collection of its kind on the West Coast, and I think it’s probably the most interesting collection of its kind in the country, because it is so broad-ranging.”

That all of these once-scattered sounds, long held in a private collector’s hands are now secured in a publicly-owned institution in Santa Barbara is one measure of Seubert’s success. More significant measures, though, remain nestled within the vessels, where countless pent-up sound waves lie dormant, patiently waiting for the chance to shed their mortal cylinders and wend their way into the here and now.