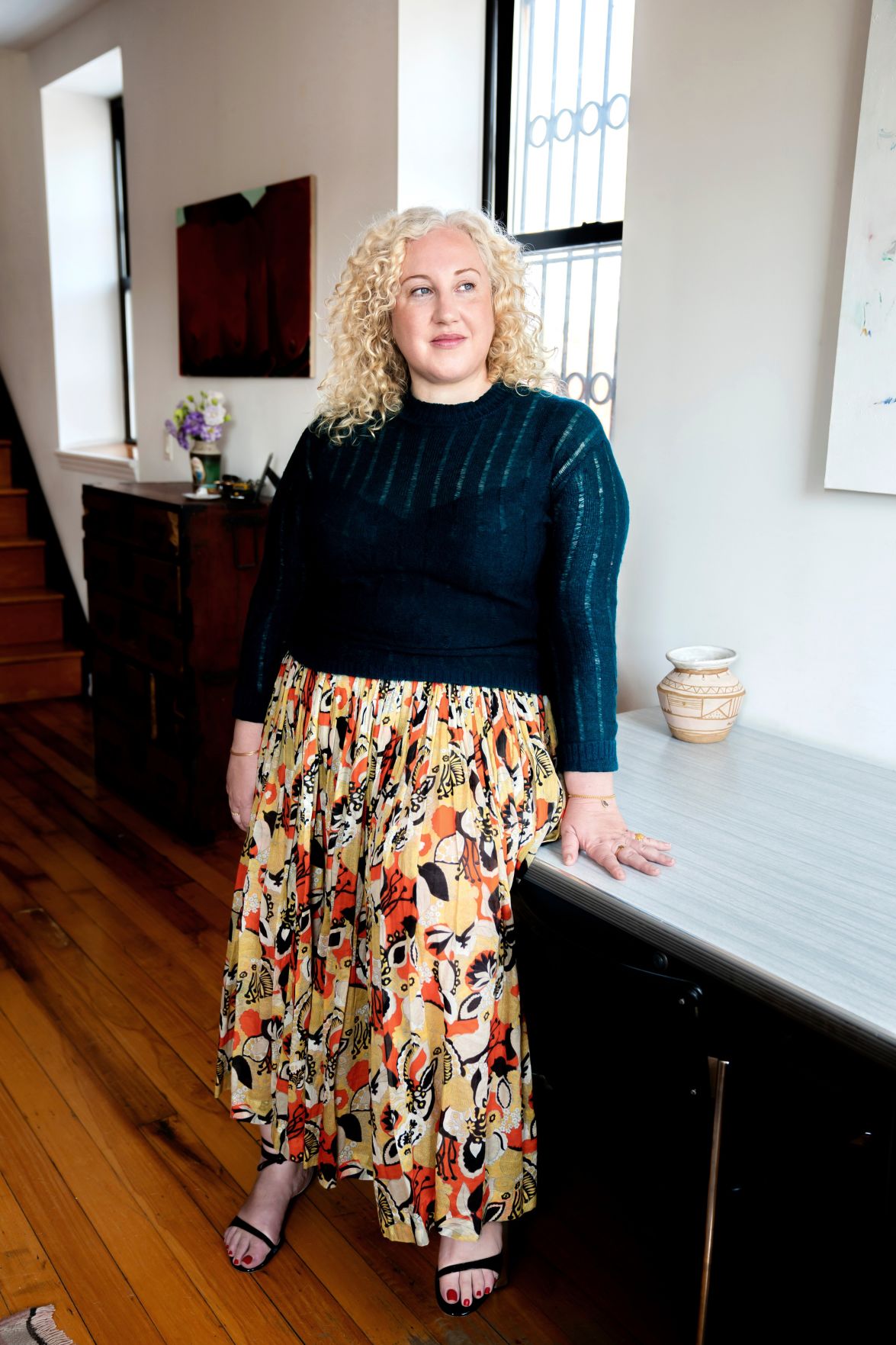 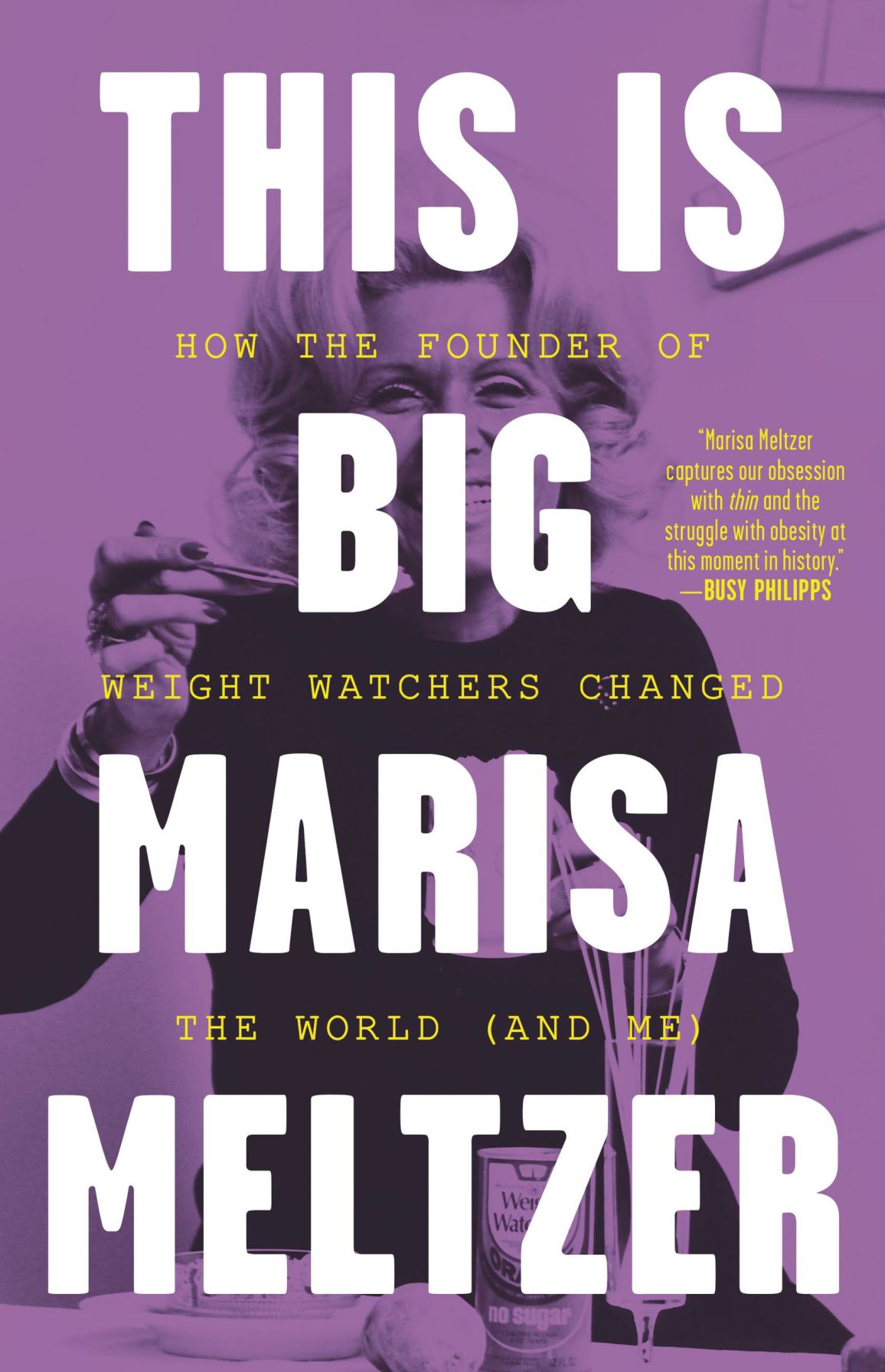 Marisa Meltzer writes about beautiful, thin people for a living. She interviews models and actresses over meals they pretend to eat with abandon. And she's often wondered if her size-16 body, so unlike theirs, invites them to open up to her.

"I think, subconsciously, it's sort of a signal that I'm not their competition," says the journalist, whose profiles of stars like Gwyneth Paltrow and Busy Phillips have run in the New Yorker and Elle. "I think there's something about the fat body that people interpret as being sort of maternal."

But when she set out to write her new book, "This Is Big: How the Founder of Weight Watchers Changed the World – and Me," Meltzer was not-so-secretly hoping she'd end up looking like one of her svelte subjects. After reading a 2015 obituary of Jean Nidetch, the founder of the weight-loss giant, Meltzer became intrigued by the story of the housewife-turned-entrepreneur. On the brink of 40, the author had struggled for decades with her weight, and thought returning to WW – which her parents put her on as a young child–while exploring Nidetch's life might generate some compelling personal transformation.

But about six months into the journey, she had to contemplate a different ending. The result is not a memoir of radical self-acceptance or saccharine inspiration, but a candid – at times dark – look at what it means to be an overweight woman in 2020.

From her loft in Brooklyn, the 42-year-old joined talked via Skype.

Jean Nidetch believed that fat people needed to be demoralized and "hurt in some way in order to be jolted into taking action." What do you think about that weight loss philosophy?

Jean had this really traumatic experience where someone mistook her for pregnant, and that was enough to kind of scare her straight. I have been mistaken for pregnant dozens of times. I had a saleswoman in Rome tell me that I wasn't allowed to buy a pair of socks. I'm always kind of wondering: Is anything going to be able to shock me to my core and scare me straight? Which is kind of a dark way to lose the weight. I don't think starting from a place of shame is great, but I also think it's kind of unavoidable, because people are so unkind in the most casual way.

I don't know if we're losing weight for reasons other than shame. I, for example, am constantly being harassed by my doctors to lose weight. And I get it. But can I ever just do something purely for health when it comes to my body? It's always going to be caught up in all the other parts of: 'Will dating be easier? Will I able to finally fit in a pair of pants that I want? Will no one ever be rude to me again?' You start allowing yourself to have more and more fanciful daydreams about the good things that can come with losing weight.

How is your life different in the fantasy where you're thin?

I think that I would be one of those writers like Candace Bushnell. The fantasies always end up very nineties. I'd be one of those writers who is in party pictures in magazines wearing a slip dress. It's very Carrie Bradshaw, which is sort of embarrassing. I think I've gotten old enough and smart enough that I don't necessarily even want those things or think those things would make me very happy, but that's what comes to mind. It's a very adolescent fantasy of being a writer in a big city with a handsome, successful boyfriend and wearing outfits that look good on skinny people. Disco-y – flared pants and tiny dresses you can get away with if you don't have any kind of back fat or boobs or stomach.

Your friends, you say, often call you an "inspiration," but they don't understand that you've "quite rigorously assembled something that looks really good from the outside." What don't they see?

They certainly don't know all of the microaggressions. They don't know about the salespeople who will really pointedly say, "We have more sizes in the back." Or the people who assess you while online dating and ask if you have a big (butt). Part of that is because I don't tell everyone those things – that stuff is painful, and the last thing I want to do when I see my best friends is talk about the worst part of my month. I want to gossip and eat Mexican food. I think I have a very good, polished facade. I am a person who is really fashionable and loves clothes. I want to look together. I don't want to be the person who is a fat, lonely loser even though sometimes I privately feel that way.

There are many more plus-size celebrities on magazine covers and onscreen than there used to be. Do you think that indicates real societal acceptance?

I think there's definitely a broader range of what is considered attractive. Vogue has someone like Paloma Elsesser or Ashley Graham on the cover. They're very beautiful, proportionate women, but they're many dozens of pounds larger than any model that graced the cover of Vogue when you or I were growing up. I think that counts as progress. I think having someone like Lizzo as this pop icon who also is a fat woman and also seems to take pleasure in her body is a huge amount of progress. I hope there's more people like that.

But I also think we as a culture get really caught up in this cheering of fat women to feel better about ourselves. We want Lizzo and Roxane Gay and Adele to love their bodies so we can feel happy for them. But that doesn't give a lot of space for what it might actually feel like to be Adele, who has clearly lost a lot of weight.

You write that you believe you're not thin because you haven't tried hard enough, but also note that you've worked your "way to the top of a really competitive industry."

Bodies are unruly and bodies don't do what we want. It's not so simple as just going on a diet and following it and then you'll lose weight and you're OK. It's not like Monica on "Friends" where it's like, "she lost the weight and now she gets to live like a normal person." If you're on a diet, you're on a diet for the rest of your life and it has to become even more strict as your metabolism changes. But it's also hard because there are some people like Jean – the people on "The Biggest Loser" or People magazine's "Half Their Size" issues –that you see that it does work for. And I think: what is wrong with me? I've spent so much time and energy and money trying to right myself, why can't I just do it?

By the end of your book, you still don't love your body. Was that difficult to admit?

I wrestled with that a lot. As the year went on, I was like, I don't have some big weight loss to show for it, but I also don't have some giant paradigm shift where I'm like, "Guess what? I learned to love myself!" Or some kind of "Eat, Pray, Love" thing where I met a boyfriend and he thinks I'm so hot the way I am! Let the confetti fall! But we're also in this time where everything feels really complicated in the world and neat endings don't really ring true. I decided to lean into that ambivalence.

You say very clearly at the conclusion that you don't think loving yourself more would make the world treat you better. That goes directly against the ethos of recent movies like "I Feel Pretty" or "Isn't It Romantic" that tout self-love as the ultimate game-changer.

I would probably be more at peace if I was happy with myself beyond what I got from the outside world. But we get a lot of that kind of hollow assurance. It often comes from people who are really successful and rich and get to wear really great clothes and have millions of followers who think they're amazing. Maybe it's easier when you have all those accoutrements, but that's never how I felt. I've known my whole life that I was smart and I never had to remind myself. No one is telling beautiful people, remember you're beautiful. They know. Maybe being beautiful or thin is not my thing. The least I can do is to be honest about how nuanced and difficult it is.