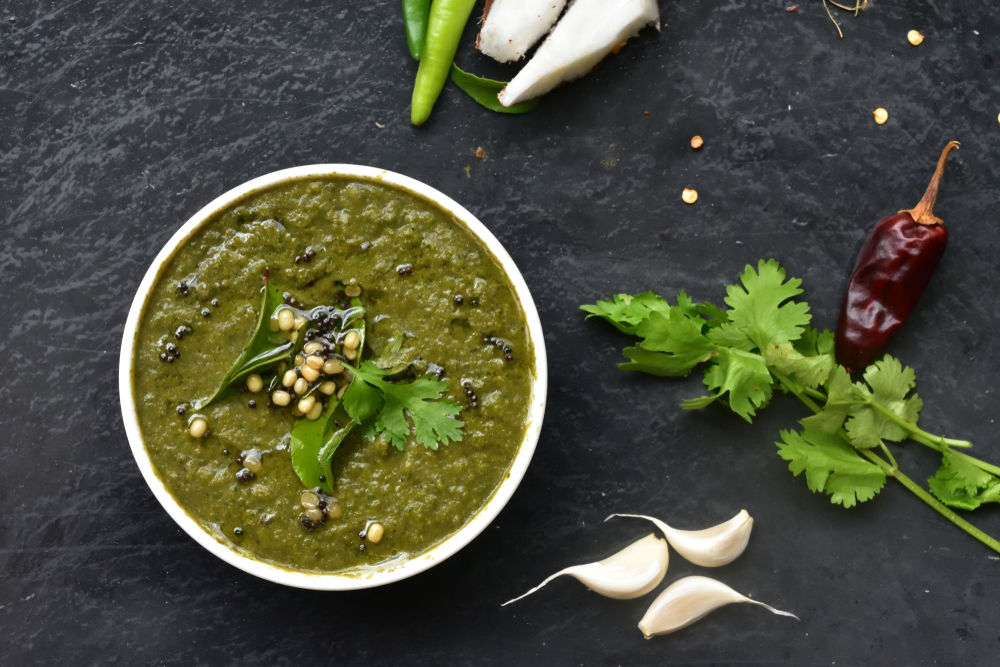 Chutney is not for the faint of heart; its flavors are intense and bold. 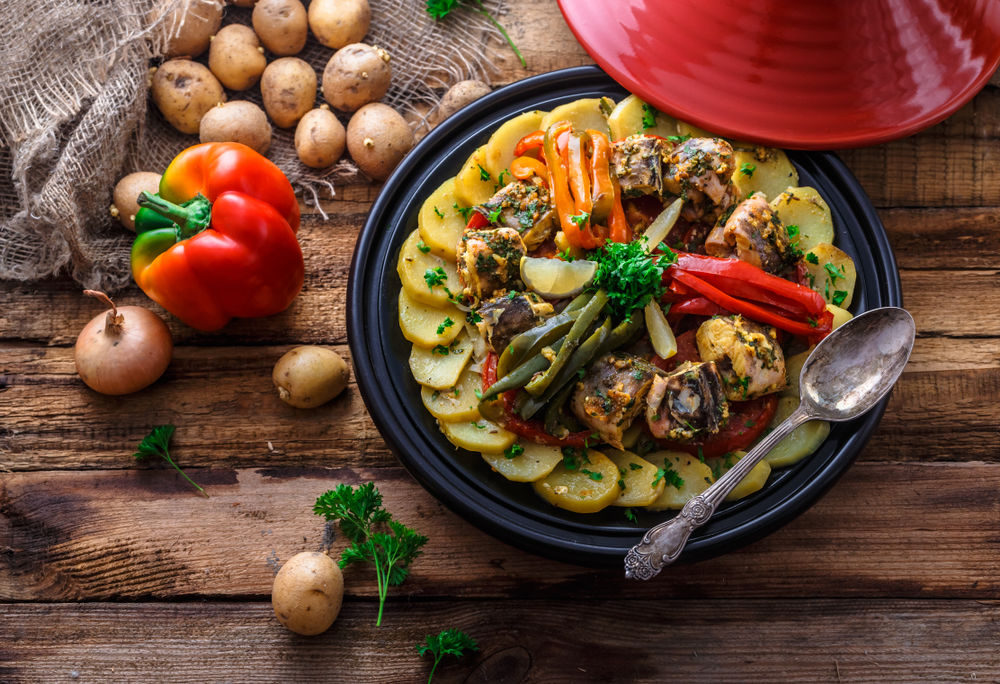 Chermoula — the Moroccan version of pesto — is made with cilantro, parsley, fresh chiles, garlic, olive oil and spices, notably cumin, coriander and cloves. Throughout North Africa, it’s used to marinade meat, fish and chicken. Pictured is a Moroccan fish tajine with chermoula. 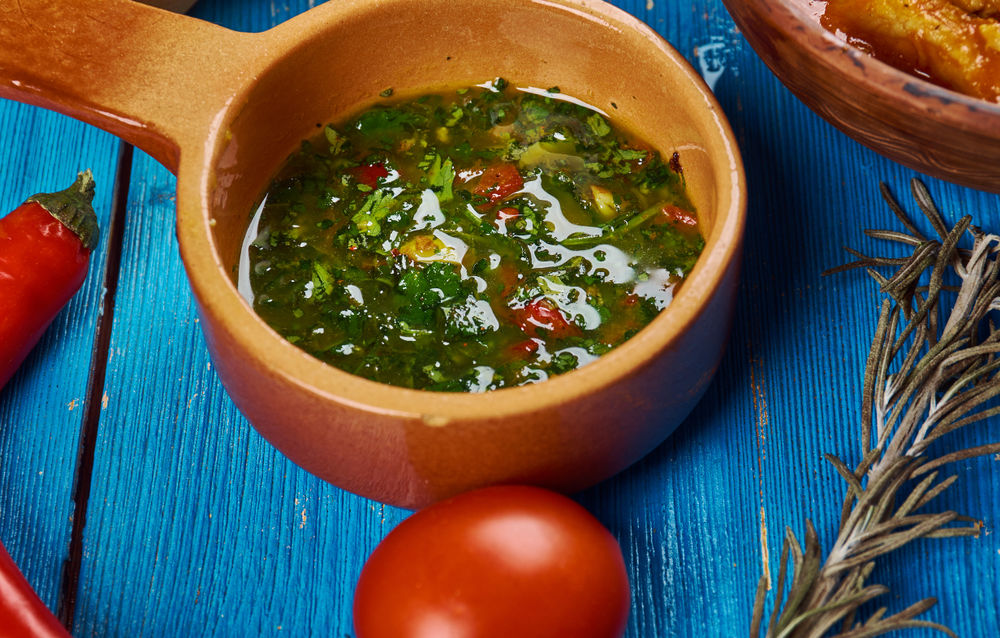 This Moroccan cilantro pesto makes a great sauce or marinade for fish, chicken or beef. It’s tasty on pasta or vegetables, too. 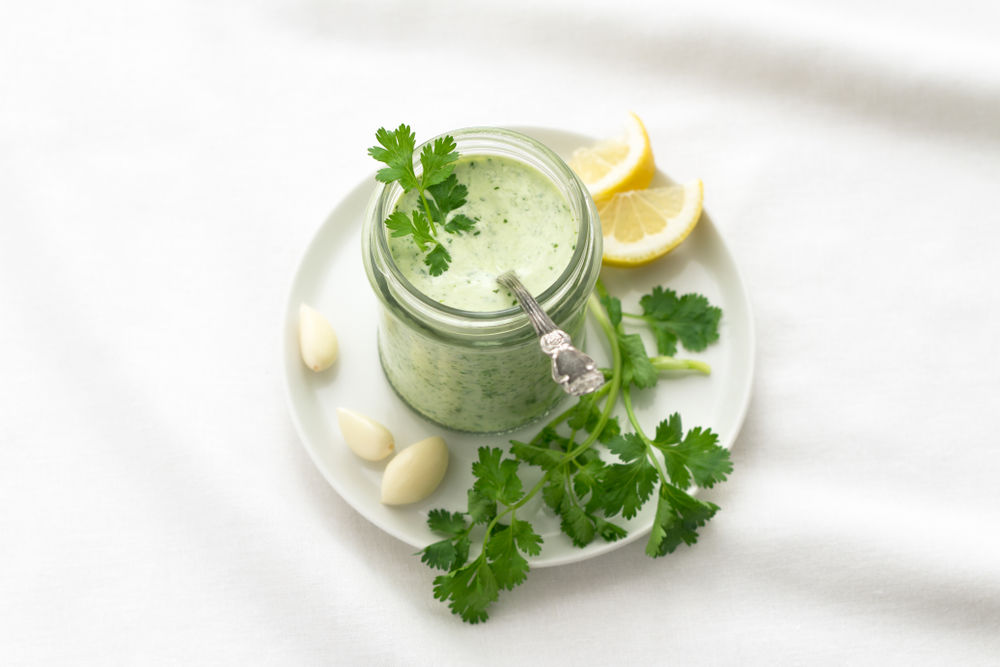 For a creamy dressing, just put all of the ingredients in a blender and turn it on high until you have a uniformly smooth, green sauce. 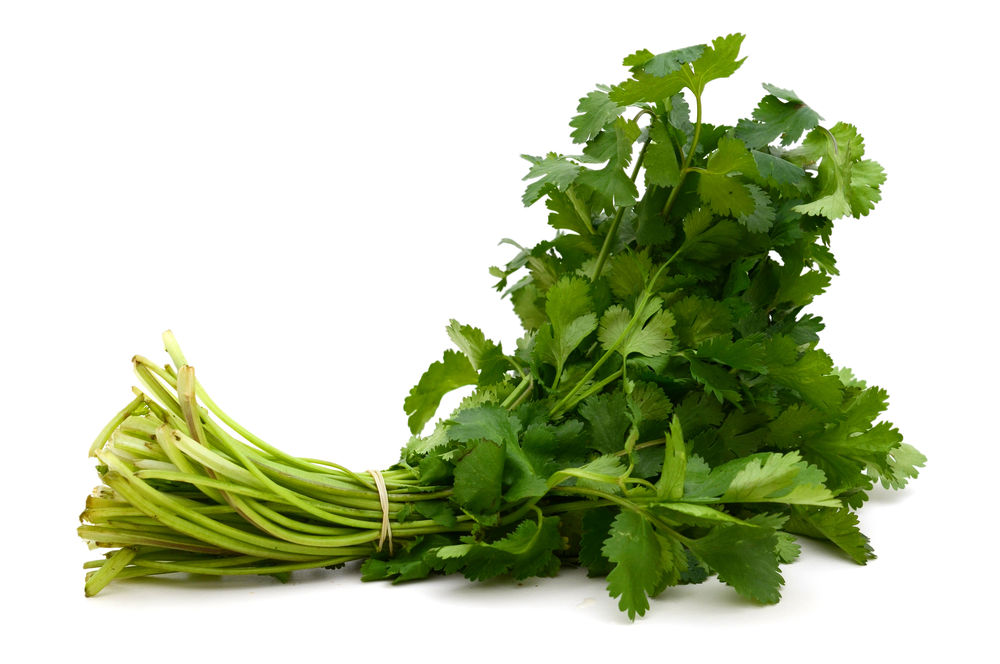 Cilantro is at its best fresh or added to a dish just before serving. 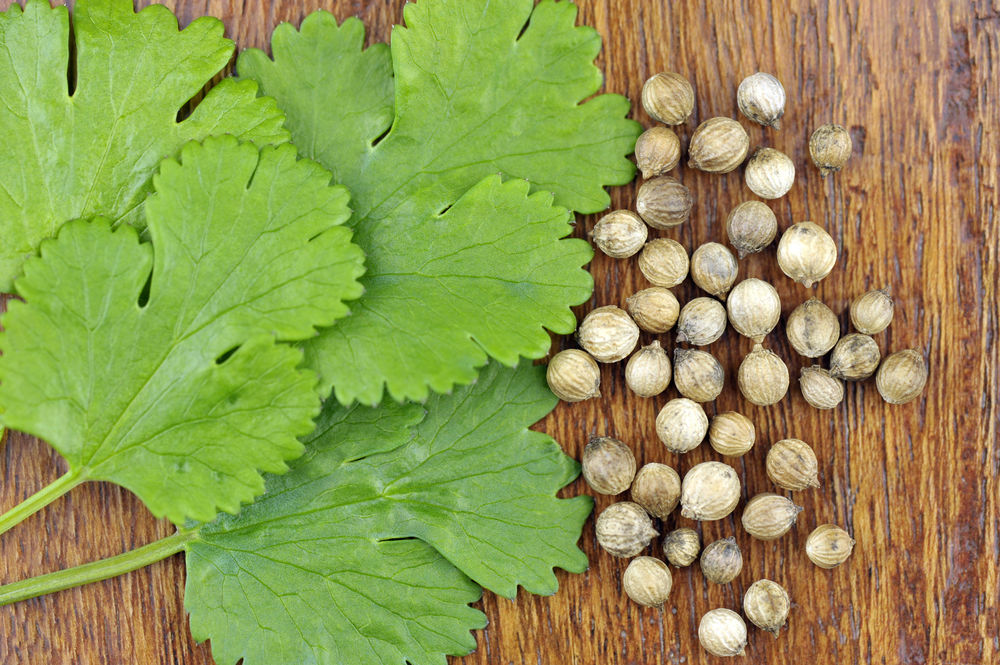 Cilantro and coriander come from the same plant.

Chutney is not for the faint of heart; its flavors are intense and bold.

Chermoula — the Moroccan version of pesto — is made with cilantro, parsley, fresh chiles, garlic, olive oil and spices, notably cumin, coriander and cloves. Throughout North Africa, it’s used to marinade meat, fish and chicken. Pictured is a Moroccan fish tajine with chermoula.

This Moroccan cilantro pesto makes a great sauce or marinade for fish, chicken or beef. It’s tasty on pasta or vegetables, too.

For a creamy dressing, just put all of the ingredients in a blender and turn it on high until you have a uniformly smooth, green sauce.

Cilantro is at its best fresh or added to a dish just before serving.

Cilantro and coriander come from the same plant.

Cilantro can open the nostrils — and the palate. All it takes is a global perspective.

(And you thought cilantro was just for burritos and guacamole.)

This now-ubiquitous herb has multiple identities. Cilantro, coriander and Chinese parsley are all the same plant. Cilantro is Spanish for coriander, the French-derived English name for this herb in any form. The Chinese reference denotes its popularity in Asia. In the U.S., cilantro has come to mean only the green leaves and stems while coriander refers to the dried seed.

Cilantro is best used fresh or added to a dish just before serving. The green leaves greatly lose their intensity — both in flavor and scent — when exposed to heat. (That’s why cilantro is generally found in fresh salsa, but not cooked sauces.) Conversely, coriander seed’s flavor and scent are intensified by heat.

To American cooks, cilantro is most commonly associated with Mexican or Southwestern cuisine, but this herb is an essential seasoning in many other parts of the globe.

That’s no wonder; it’s native to North Africa, southern Europe and southwestern Asia, all regions that have enjoyed cilantro and coriander for centuries.

For example, chermoula — the Moroccan version of pesto — is made with cilantro, parsley, fresh chiles, garlic, olive oil and spices, notably cumin, coriander and cloves. (There are countless variations.) Throughout North Africa, it’s used to marinade meat, fish and chicken. Zhug may be the next Sriracha. This Yemeni hot sauce — popular in Israel — combines cilantro, olive oil, cardamom and hot chilies.

Cilantro shows up in many other cuisines. The fresh leaves are used in chutneys and salads in Chinese and Thai cooking. They’re added by the handful to Indian recipes or used as fresh garnish. The leaves are a common salad ingredient in Russia. Like chermoula, Argentine chimichurri uses both parsley and cilantro (and probably originated in Basque country).

But cilantro’s popularity has truly ancient roots. Some 2,000 years ago, the Greeks grew this herb. Coriander was found in King Tut’s tomb.

Cilantro differs from parsley, its close cousin, in its complexity. Cilantro contains distinct citrus notes, adding a touch of lemon or orange to whatever it flavors. As a mildly bitter herb, it also stimulates digestion and taste buds, intensifying other flavors.

This Moroccan cilantro pesto makes a great sauce or marinade for fish, chicken or beef. It’s tasty on pasta or vegetables, too. Recipe adapted from Epicurious.com

Toast coriander and cumin seeds in a dry small skillet, tossing occasionally, until very fragrant, about 2 minutes. Let cool, then lightly crush with a heavy skillet.

Note: Store sauce in sealed container in refrigerator. It can be made three days ahead of use.

This chutney is not for the faint of heart; its flavors are intense and bold. Spread a thin layer on a thick slice of bread and make a grilled cheese sandwich. Add a tablespoon of the chutney to a cup of cream cheese, whip well and use as a dip or as a spread for fresh sandwiches. Spread it on a flatbread, add toppings and make a spicy grilled pizza.

Make Ahead: The chutney needs to be refrigerated for at least 2 hours and up to 3 days before serving.

Note: This recipe features jaggery, a naturally processed sugar made from the sap of sugar cane or palm trees. It is available at Indian markets.

Combine the cilantro, jalapeño, 1/4 teaspoon of the cumin seed, the tamarind paste, salt and jaggery or brown sugar in a food processor or blender; purée until fairly smooth. Transfer to a serving bowl; just before serving, sprinkle with the remaining teaspoon of cumin.

Add this to your list of things to do with leftover rotisserie or roast chicken. The recipe is from Jennifer Perillo, a food blogger www.injennieskitchen.com

Note to cumin haters: I’m not sure why the spice gets top billing here. It’s barely perceptible, so don’t worry. Serve on slider buns or atop a salad.

About 1/2 cup canola or grapeseed oil, for frying

Finely chop the meat to yield 1 1/2 cups; transfer to a mixing bowl. Finely chop the cilantro and onion (together is OK), adding them to the bowl. Pour the oil into a medium skillet to a depth of about 1/4 inch. Heat over medium-high heat until the oil shimmers.

Meanwhile, line a baking sheet with a few layers of paper towels, then place a wire rack over the paper. Lightly beat the egg, then add it to the bowl, along with the cumin and bread crumbs. Stir until well incorporated. Divide the chicken mixture into 6 equal portions. Shape each one into a 3-inch disk that’s about 1/2 inch thick; the mixture will barely hold together. Add 3 or 4 of them to the skillet (or as many as will fit without crowding the pan); cook for 2 to 3 minutes, until they are browned on the bottom; turn them over and cook for 2 or 3 minutes on the second side until nicely browned.

Transfer to the rack to drain; immediately sprinkle lightly with salt. Repeat with the remaining chicken patties. Serve warm.

Recipe from Cowgirl Chef Ellise Pierce via the Fort Worth Star-Telegram.

Salt and pepper to taste

Make the dressing: Put all of the ingredients in a blender and turn it on high until you have a uniformly smooth, green sauce. I usually do this a day in advance and keep it refrigerated.

Slice chicken tenders into 1 1/2-inch pieces and put in a bowl with lime juice, 1 tablespoon olive oil, garlic, cilantro and chopped jalapeño. Cover with plastic wrap and refrigerate to marinate for a couple of hours or overnight.

Bring chicken to room temperature before cooking. Turn oven to broil and grease a baking sheet with remaining 1 tablespoon olive oil. Put chicken pieces on baking sheet, letting whatever bits of the marinade cling stay on the meat. Add salt and pepper. Cook 8 to 10 minutes, or until slightly firm yet slightly springy to the touch. Transfer chicken to a plate, cover with foil and let rest for 5 minutes.

To serve, cut romaine lettuce into thin strips and heap onto individual serving plates (or one large platter for family-style). Add chicken pieces. Drizzle cilantro dressing all over and sprinkle with pepitas just before eating.

Nutrition: Cilantro offers a lot of taste with minimal calories and no fat; 1/4 cup (4 tablespoons chopped) fresh cilantro leaves contain only 1 calorie. The leaves are considered high in vitamins A, C and K plus dietary fiber. Several studies have credited cilantro with a wide range of healthy attributes from helping sleep to lowering cholesterol. It’s been used as a digestive aid for centuries.

Selection: Cilantro is usually sold in bunches. Look for bright, evenly colored green leaves with no sign of yellow or brown. Leaves should appear fresh, not wilted, with crisp stems.

Storage: Cilantro dries out quickly. But in a sealed plastic bag, it tends to quickly turn to slime. Try this trick: Treat the leaves like a bouquet of fresh flowers. Snip off the bottom of the stems about 1/2 inch. Place the stems in a glass or pint jar with 1 inch of water in the bottom, making sure the stems reach the water but the leaves should be above the rim. Loosely place a plastic bag over the glass and cilantro leave and refrigerate until needed. Change the water every two days. The cilantro will stay fresh, crisp and fragrant for at least a week. Rinse just before use.

Freeze it: Cilantro will keep its flavor (but not its scent) when frozen. For easy use, chop cilantro, then distribute into an empty ice cube tray with 1 tablespoon of cilantro per cube space. Top the tray off with water and freeze. When frozen solid, transfer cubes to a sealed plastic bag. When cooking, add the frozen cilantro cube to recipes, 1 chilly tablespoon at a time.

Or chop fresh cilantro and spread in single layer on a cookie sheet; freeze. Transfer to a zip-locked bag (do this quickly before cilantro defrosts). Store in the freezer for up to six months; no defrosting necessary.

Soapy aftertaste: Cilantro contains aldehyde, a natural chemical compound also found in soap. According to scientific studies, 4 to 14% of the population is super-sensitive to the scent (and taste) of aldehyde. To those people, cilantro will taste like soap.