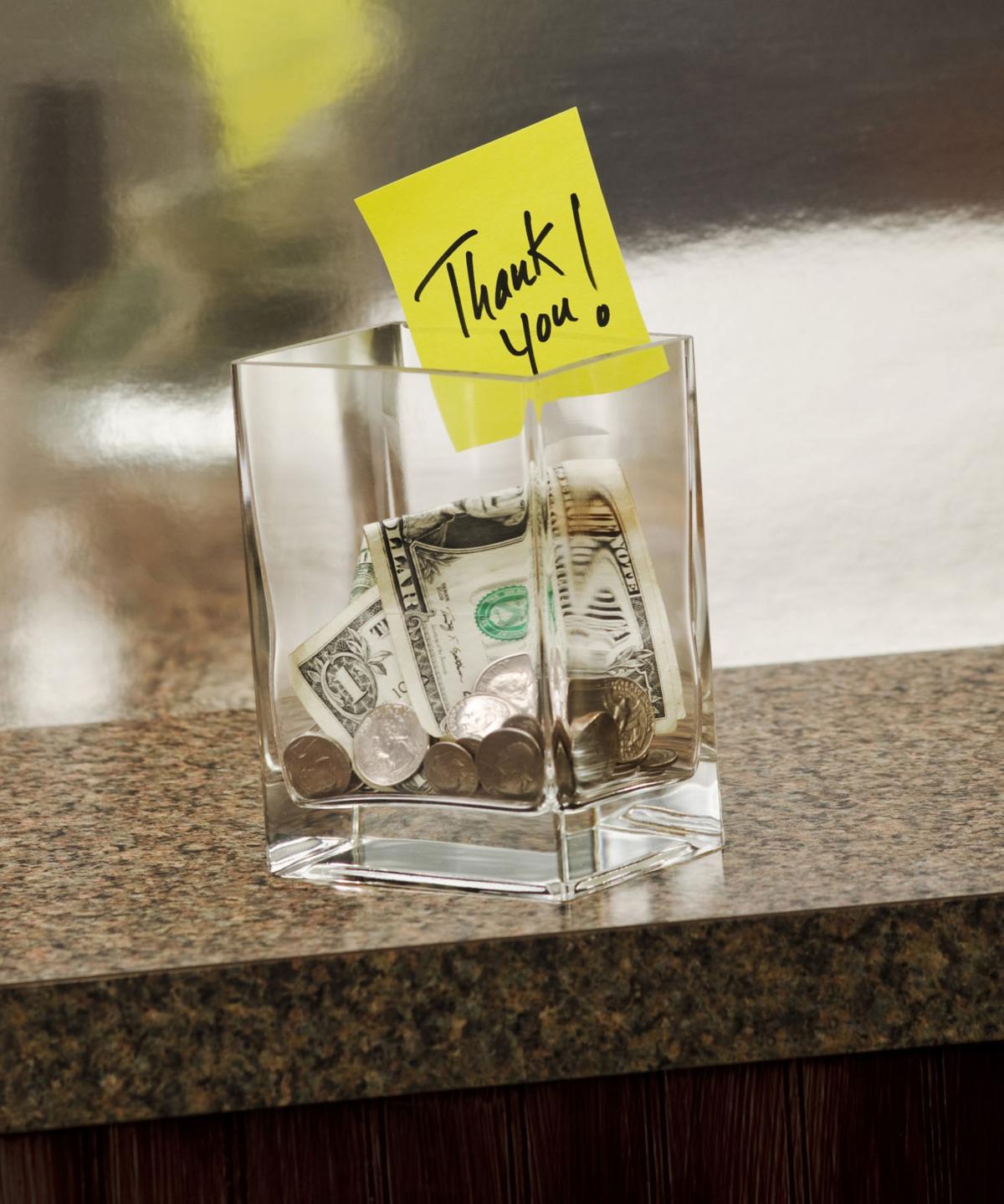 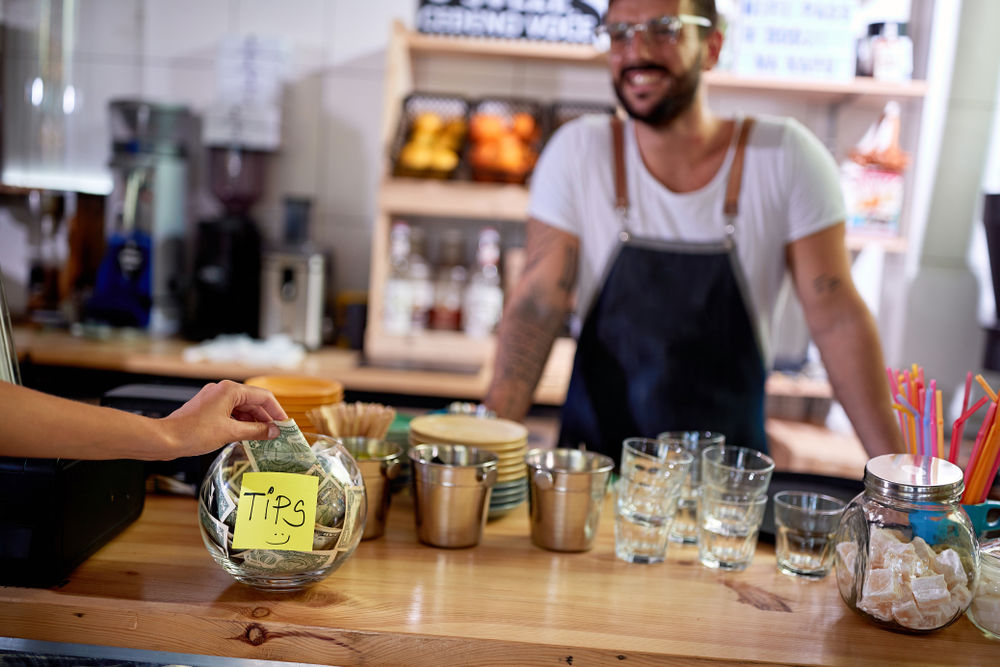 Tips are appreciated, especially during a pandemic when wages may be less than usual. 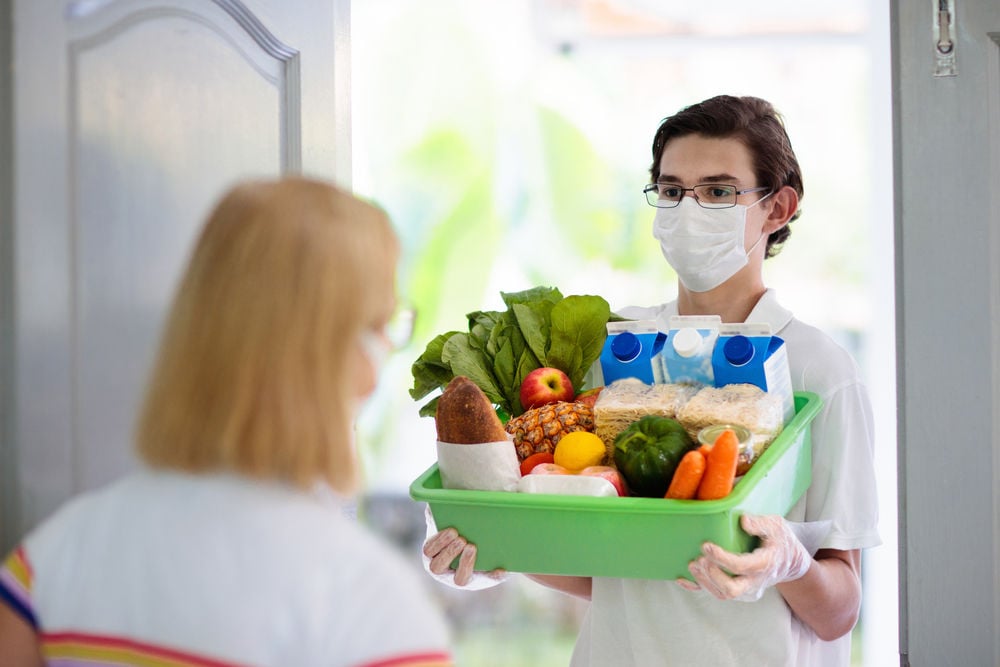 Customers are appreciating the effort it takes to do takeout and delivery and have been rewarding employees more often with tips.

Tips are appreciated, especially during a pandemic when wages may be less than usual.

Customers are appreciating the effort it takes to do takeout and delivery and have been rewarding employees more often with tips.

The federal minimum wage hasn’t changed from $7.25 since July 24, 2009, but in the United States of Tipping, an employer only needs to pay hourly tipped employees $2.13 cash per hour, minimum. If all goes well, tips should bring the average wage up to the federal minimum, but as we know… things are not going well.

As stay-at-home orders are extended or dine-in capacity has been limited, restaurant industry workers have either become essential employees or been laid off without options for another job. Only seven states require employers to pay tipped employees a full state minimum wage before tips.

Wage structures in other states can severely impact how service-industry workers make a living in the best of times. And in the worst of times, like in ahem a pandemic, the situation can be dire.

I was working my last 2 weeks as bar manager at a restaurant before my state’s stay-at-home orders were put in place. Those were the 2 weeks I was supposed to transition into the role of brand manager for a new restaurant, but when stay-at-home orders came down, my former restaurant, unable to execute to-go orders, shuttered under the pressure. The new project was immediately halted and my colleagues and I were let go.

CULTURE IS ADAPTING — AND DISAPPEARING

With restaurants coming out of the slowest months in the industry (looking at you January and February), the drastic decline in sales across the board is unsurprising. To-go orders are not as profitable as dine-in service and, like my former place of work, may not be enough.

Even before stay-at-home orders, Omar Anani, chef and owner of Saffron De Twah closed his Detroit restaurant for the safety of the staff and community. “We took a huge hit financially but it was the right thing to do. We could have rode it out but sitting in the restaurant all day waiting for carryout orders would have been a waste of time.”

The art of dining and conversation, be it ice cream, prix-fixe menus, or wine, is the main business model for many places. But in a virtual landscape, all of that — encouraging customers to try new or different experiences — is lost. Now a customer needs to know what they want, and can get it, with a click of a button.

Some restaurants, however, have been able to rally the support through social media campaigns, word of mouth, and branded delivery vans or food trucks. They’ve transformed their business model by adding grocery options to their carryout offerings, reworking menus to fit carryout, or ramping up their large volume carryout offerings to maintain and meet the direct needs of people around them.

Or, like Anani and his staff, they’ve been donating their time to provide meal kits to the industry workers who were laid off. They’ve fed hospital workers and those on the frontlines while continuing to purchase from local farms and suppliers. And each of these businesses have observed a common trend among the tip lines on their carryout orders: they’ve been higher.

“I actually called a customer to make sure she meant to tip $50 on a $44 order,” says Miranda Johnson, Marketing Director and Taproom GM at B. Nektar in Ferndale, MI. “She did, and I immediately burst into tears.”

“We’ve always had some really great tips in general, but during this time the tips go to those working on delivery and carryout,” she says. “As for the future, I think people will be way more aware of what goes into service and I hope they will continue to be generous with how they tip. Especially on carryout orders.”

Traditionally, tipping has only been associated with a dining experience. Carryout orders were a component of tipping many people never thought about and may have regularly left the tip line blank or filled in a zero.

“We’re recognizing new facets of service and tipping more appropriately, or fairly,” says Alicia Banaszewski, who’s spent 10 years working Front of House in the industry. “Tipping is changing for the better because of the current situation and a different kind of service is being highlighted.”

There are also many campaigns out there that keep the conversation of tipping relevant and changing. Nick Britsky of NickDrinks.com put together a social media campaign in an effort to help bartenders who are temporarily out of work. GoTipEm.com is a database of over 4,700 bartenders from all 50 states that lists their PayPal, Venmo, and cash apps.

“The idea is to use GoTipEm every time you post a photo of a drink to your social media,” says Nick Britsky. “Select a favorite or random bartender and tip them a few bucks. A little bit goes a long way.”

Even without making a purchase from a closed establishment, people are sending tips electronically. I personally experienced the kindness from one of my brewery regulars who tipped me $5 on a Saturday night as he enjoyed a beer from the local brewery where I previously worked.

“Before, people tipped bartenders really well at busy bars to ensure good service rather than getting exceptional service and tipping accordingly. Now, we are seeing people paying gratitude or gratuity for the service and place,” says Anani.

And gratitude for people.

“I have never been money motivated. It’s a passion and love for the hospitality which extends beyond the hours of Saffron De Twah,” says Anani, who is currently supplying the meals through generous donations from local business owners, community sponsorships, and his company’s funds.

“I learned that from my mother who constantly puts everyone before herself. It’s during these times you see people’s true colors and the ability of humans to stand together and rise above a challenge.”

And what going above and beyond looks like, especially in these times of hardship, is community care. How the restaurant industry has come together has inspired others, like the pay-it-forward movement “#FeedTheFrontLine.”

This social media campaign encourages owners of businesses and individuals to purchase large quantities of food from local restaurants and have it delivered to local hospitals, ICUs, ERs, police, and fire departments. Thus, keeping the workers on the front lines fed while supporting a local restaurant, to encourage profits that keep their doors open and continuing payment for their staff. It’s a movement that supports the local community through the chain of economy.

Brandy Ochab, co-owner of Pete’s Place Restaurants, has been overwhelmed by the kindness residents and customers have shown them. “It’s humbling to not only see, but be a part of. And on top of paying it forward, all of those orders include a generous tip for our entire staff. It makes a world of difference for us, our employees, and those working hard on the frontlines.”

As the industry adapts and provides food in new ways, the landscape of dining and tipping will inevitably shift. What is valued as exceptional service, meeting the customer’s expectations and holding food and drink to a certain standard, will still be important but so will stories of community members and essential staff.

“At the end of the day, if you look up the definition of a tip or gratuity. It is not mandatory,” says Anani. “It is based on a level of service or hospitality that goes above and beyond.”

“Tipping is changing for the better because of the current situation and a different kind of service is being highlighted.”– Alicia Banaszewski, whose worked front of house in restaurants for 10 years.

“I actually called a customer to make sure she meant to tip $50 on a $44 order. She did, and I immediately burst into tears.”– Miranda Johnson, Marketing Director and Taproom GM at B. Nektar in Ferndale, MI