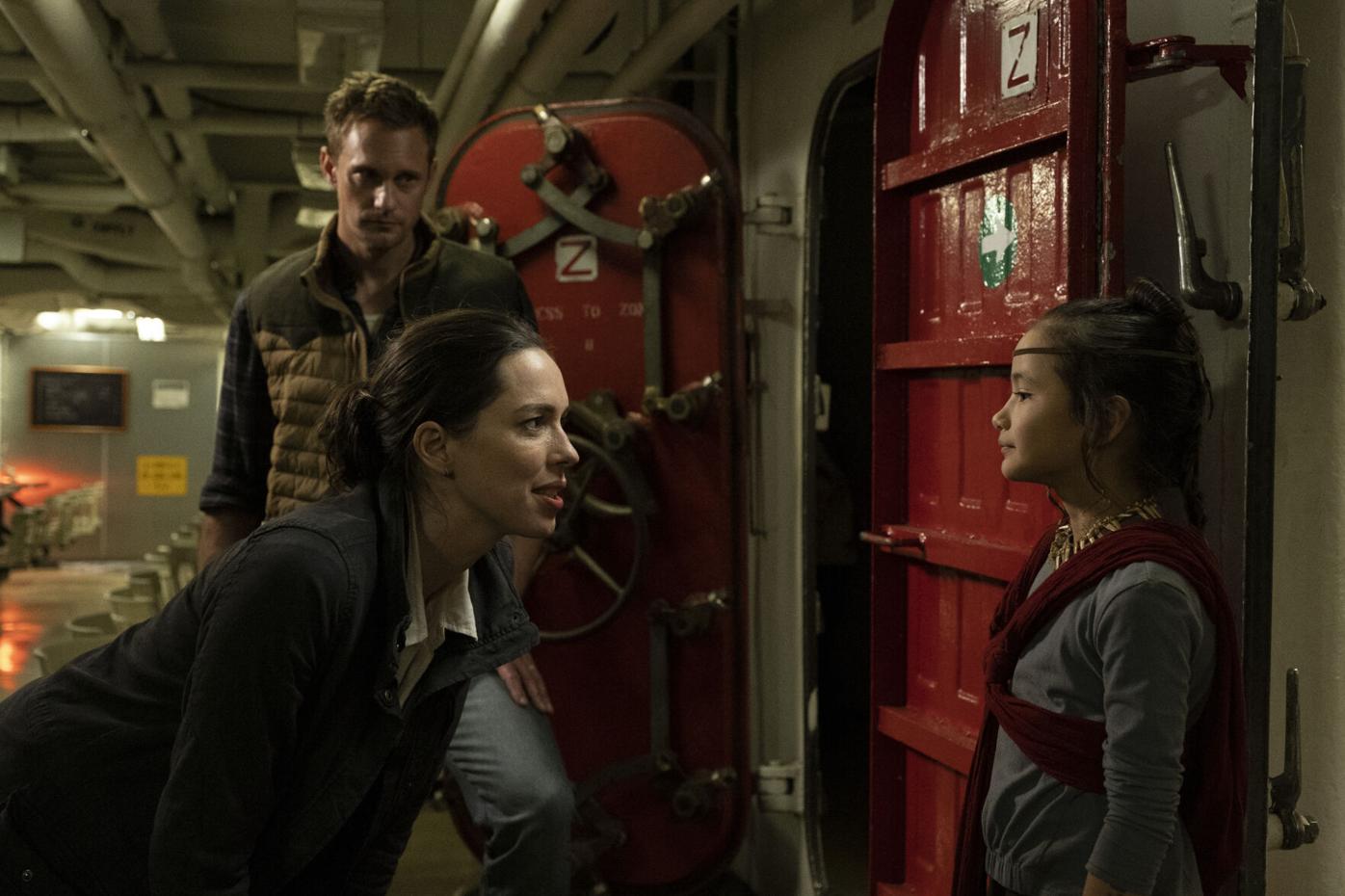 Alexander Skarsgard, background, Rebecca Hall, foreground left, and Kaylee Hottle in a scene from "Godzilla vs. Kong." Hall plays a researcher and Skarsgard leads a human team following Kong. Deaf actor Hottle has an "E.T." moment in the film.

Kaylee Hottle stars in a scene from “Godzilla vs. Kong.” Director Adam Wingard said he focused on keeping the humans “as close together as possible” with the monsters throughout his film, including an “E.T.”-evoking moment with deaf actor Kaylee Hottle. 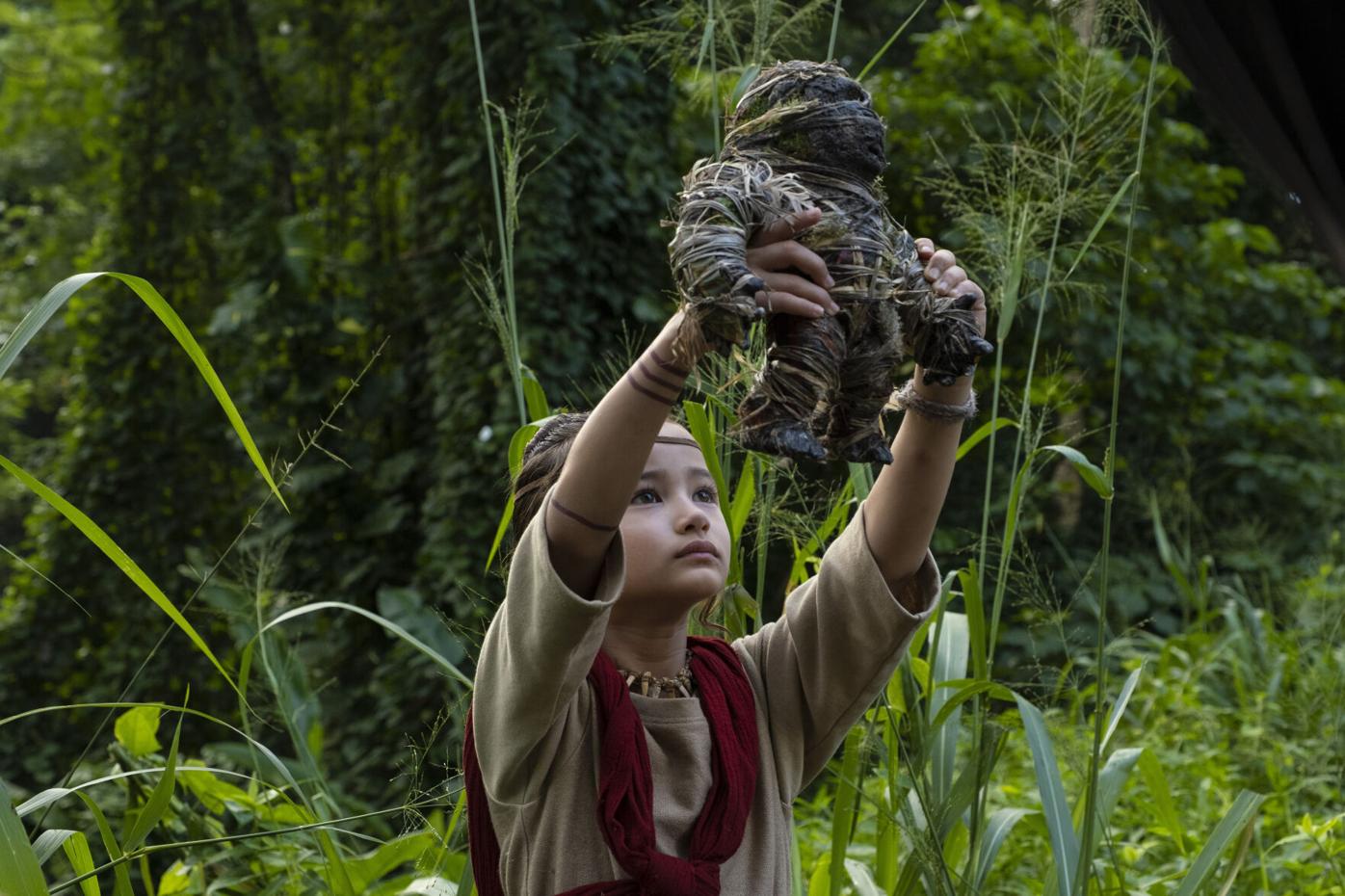 Deaf actor Kaylee Hottle in a scene from "Godzilla vs. Kong." Director Adam Wingard said he focused on keeping the humans “as close together as possible” with the monsters throughout his film, including an “E.T.”-evoking moment with Hottle.

Godzilla ina scene from "Godzilla vs. Kong." Godzilla’s atomic breath and Kong’s chest-thumping were crafted for maximum sensory impact in theaters, but viewers can also see it on the small screen. 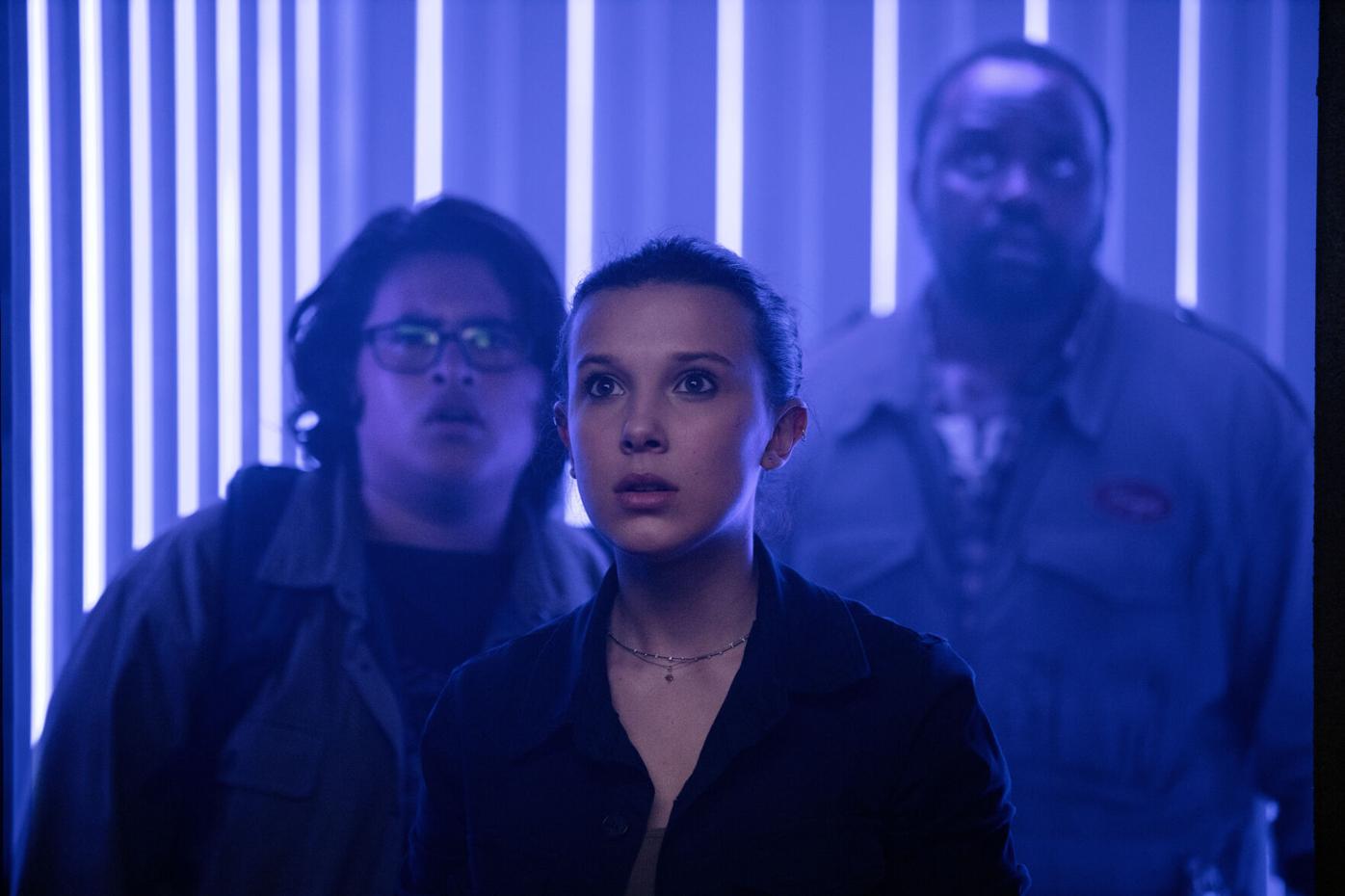 Eiza Gonzalez in a scene from "Godzilla vs. Kong."

Kyle Chandler (top) and Eiza Gonzalez in scenes from “Godzilla vs. Kong.”

Deaf actor Kaylee Hottle in a scene from "Godzilla vs. Kong." Director Adam Wingard said he focused on keeping the humans “as close together as possible” with the monsters throughout his film, including an “E.T.”-evoking moment with Hottle.

Eiza Gonzalez in a scene from "Godzilla vs. Kong."

But don’t fret about finding a message amid the mayhem as the towering radioactive lizard clashes with that instantly-recognizable giant ape in “Godzilla vs. Kong.”

“It’s about two big guys bashing each other around,” actor Rebecca Hall, who plays a researcher studying King Kong, said laughing. “There is a sense that the less that humans meddle with stuff, the better, is a general theme.

Director Adam Wingard’s clash of the titans caps Legendary Entertainment’s “Monsterverse” series, which includes 2014’s “Godzilla” and 2017’s “Kong: Skull Island.” While not all were winners with critics, they’ve grabbed plenty of cash at the box office — more than $1.4 billion worldwide.

All four films take their central creatures seriously — both within the stories and by pouring money into nuanced special effects — while often winking at audiences with self-aware references. The films have featured performances from top-caliber actors enjoying the silliness of it all: Bryan Cranston, Ken Watanabe, Tom Hiddleston, John C. Reilly, Sally Hawkins, Vera Farmiga.

“This is one of those films that will be seen in every corner of the planet." — actor Demián Bichir, who plays an overreaching tech mogul

In the newest entry, the returning Millie Bobby Brown and Kyle Chandler are joined by Hall, Alexander Skarsgård, Brian Tyree Henry and Eiza González, among others. No matter the scene, the actors always knew who was filling the top spots on call sheets during production — Godzilla and King Kong.

“They’re divas, that’s what’s so difficult. You go on to set, they don’t look at you in the eye. It is in their contracts. Whatever. I found it really difficult to work with specifically Kong, just because he thought he ruled the roost,” cracked Brown. “You just want your close-up. And Zilla is like ‘rawr’ and you’re like, ‘Bro, calm down.’”

Wingard said he focused on keeping the humans “as close together as possible” with the monsters throughout his film, including an “E.T.”-evoking moment with deaf actor Kaylee Hottle.

But when the titular showdowns start, “it was really important to me to do what the original films did. Like if you look at all the Showa-era films, when the monster battles happened, it just stays with the monsters. ... We wanted to make sure the monsters were able to do their thing and just get into it.”

That includes a fight on and underneath an aircraft carrier in the middle of the ocean, with Kong struggling and Godzilla moving smoothly and realistically through water. Later, shattering neon highlights an eye-popping clash among and through the skyscrapers of a heavily-stylized Hong Kong.

“People need something to just like celebrate and cheer and have fun and see millions of dollars of special effects.” — actor Brian Tyree Henry, who plays a conspiracy-theorizing podcast host

Skarsgard, whose character leads a human team following Kong to the film’s most fantastical location, said Wingard’s approach was to “really lean into the craziness of it. And his take on it was, well, if you’re going to go big, go really big. Go crazy, let’s have fun with it, we haven’t seen these titans go toe-to-toe in 50 years, 60 years. So let’s really enjoy this.”

Godzilla’s atomic breath and Kong’s chest-thumping were crafted for maximum sensory impact, but viewers can also see it on the small screen. A pandemic-disrupted rollout had the film debuting March 24 both at theaters and on streaming service HBO Max. The film’s stars say they’re just happy to share the spectacle, whether it’s on an IMAX or iPhone screen.

“These are extraordinary times that demand extraordinary measures,” said Demián Bichir, who plays an overreaching tech mogul. “This is one of those films that will be seen in every corner of the planet. And that alone makes me very, very happy.”

Henry, the “Atlanta” series star who plays a conspiracy-theorizing podcast host, said the film’s extravagance feels right for this moment in the pandemic.

Legendary and distributor Warner Bros haven’t announced any future “Monsterverse” installments after “Godzilla vs. Kong.” Wingard said he’d be happy to return to a “phase two” of the franchise, envisioning a “nearly silent film where we just watch the monsters do their thing.”

“There are enough characters that are well-enough defined where we can imprint whatever we want on them,” he said. “I think audiences are ready. And I think the special effects world is up-to-date to be able to handle that.”

Copyright 2021 The Associated Press. All rights reserved. This material may not be published, broadcast, rewritten or redistributed without permission.