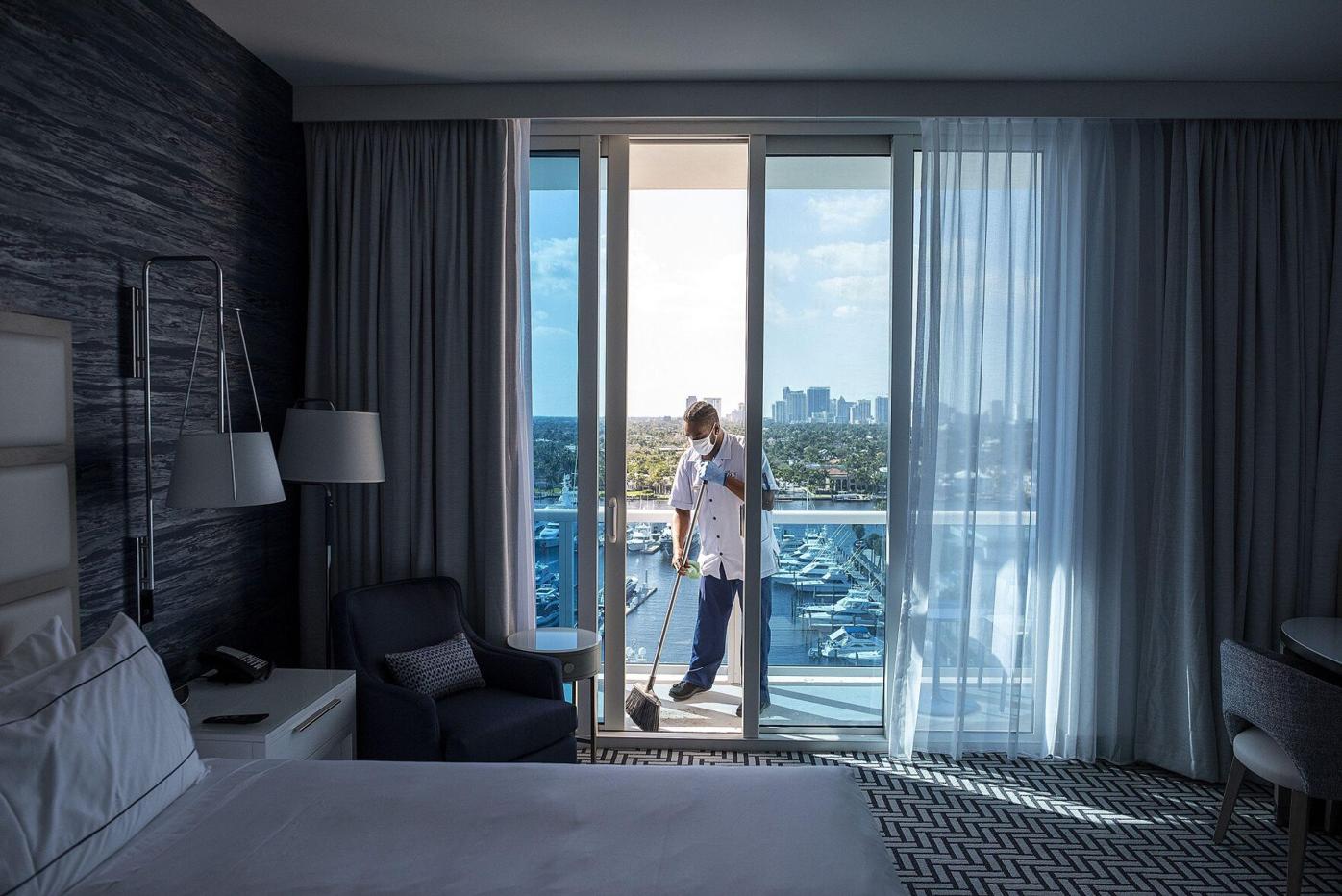 Kelsey Lanier sweeps the balcony of a room Jan. 21 at the Hotel Maren Fort Lauderdale Beach. It’s one of several new hotels to open in South Florida. 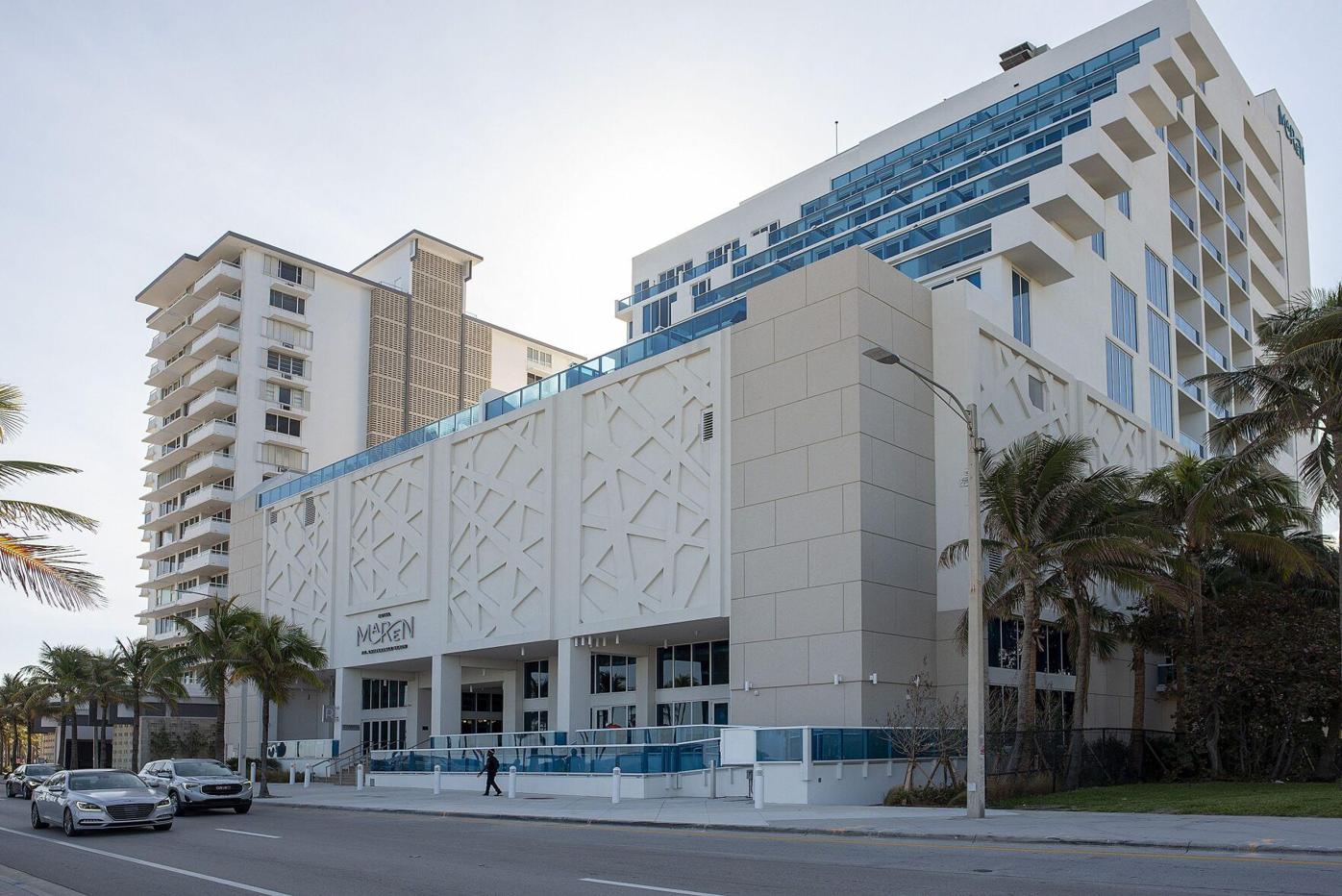 The Hotel Maren celebrated a soft opening in Fort Lauderdale on January 21, 2021. Room rates are in the mid-$300s per night.

Kelsey Lanier sweeps the balcony of a room Jan. 21 at the Hotel Maren Fort Lauderdale Beach. It’s one of several new hotels to open in South Florida.

The Hotel Maren celebrated a soft opening in Fort Lauderdale on January 21, 2021. Room rates are in the mid-$300s per night.

FORT LAUDERDALE — Dozens of new hotels are opening all across South Florida this year — ready for the day that pandemic-averse travelers decide to take those long-awaited vacations.

The surge of new hotels is happening near the airports, along the beaches and in downtown areas. Most of the hotels fly the flags of major national brands such as Hilton, Marriott and Holiday Inn.

Broward and Palm Beach counties are seeing a combined two dozen hotels coming online this year — and Miami-Dade’s numbers nearly match them both, according to Colliers International data.

Those planning hotel stays shouldn’t expect widespread discounts: As long as COVID-19 suppresses the public’s prepandemic desire to travel, it’ll keep depressing hotel revenues industrywide, analysts say. What travelers can expect are hotel staffs eager to woo them with fancy restaurants, spas, fitness centers and commitments to keep them safe from the coronavirus.

“I think the consumers will benefit from deals here and there, but there is not a tremendous amount of discounting,” said Rich Lillis, director of Colliers Hotels USA, an arm of the Colliers International real estate services firm.

“It will mean newer products and more of a variety of offerings,” Lillis said of the new openings. “We think the new hotels are going to outperform the older ones just because consumers will gravitate toward that.”

Here are samples of some of the new offerings, according to lists provided by the Greater Fort Lauderdale Visitors and Convention Bureau and Discover The Palm Beaches:

Among the first out of the box this year is the recently opened 141-room Maren Fort Lauderdale Beach, Curio by Hilton, at 525 Ocean Blvd.

“The water views are our claim to fame,” said Matthew Lois, the hotel’s sales manager. “Ocean views. Intracoastal views. The majority of our rooms have balconies.”

He’s also counting on a restaurant run by a “Top Chef” celebrity as a draw. Riviera by Fabio Viviani, a 200-seat coastal Italian eatery started operating this weekend.

“We’re looking for anyone who wants to be near the beach but doesn’t want a big box property,” Lois said of the clientele the hotel hopes to build.

Rates are in the mid-$300s per night, which Lois called “competitive” with other hotels up and down the shoreline.

Lois said he expects most of the Maren’s visitors to be from Florida, as has been the case for most hotels since the pandemic broke out last March.

“I think the Southeast is a big component,” he said. “Right now, there are limited flights from Canada” due to national travel restrictions imposed by the Ottawa government. Normally, Canadians would be “a huge component coming into Fort Lauderdale” this time of year.

“I think right now we’re still seeing the drive market, at least to Fort Lauderdale beach,” Lois said. “Business travelers are coming, too, but their numbers are minimal.”

“We are seeing some business travel coming back that we haven’t seen in the last few months,” he said.

Those who’d rather be closer to many downtown stores and restaurants will have new options aplenty.

The Courtyard Fort Lauderdale Downtown, which also opens this month, has 137 rooms. It’ll be by the trendy, arts-oriented Flagler Village section of downtown Fort Lauderdale. Features include a state-of-the-art lobby, two meeting rooms with a total of 2,300 square feet of flexible meeting space and an indoor pool.

The Ray in Delray Beach is scheduled to open in July, located two blocks north of downtown’s Atlantic Avenue in the artsy community of Pineapple Grove. Its 141 rooms have balconies.

And guests will have access to a 20,000-square-foot pool deck with four food and beverage options, a rooftop venue, a signature restaurant and a neighborhood coffee shop.

Multiple private event spaces, including the Rooftop and the Cube, also will be available.

After several years of stops and starts, the Four Seasons Fort Lauderdale Hotel & Residences is projecting a December opening.

The 22-story project, which has 148 hotel rooms and 83 private residences, will offer guests access to à-la-carte services managed by Four Seasons, including a state-of-the-art fitness center, two pools with luxury cabanas, beach butler service and spa and yachting services.

In Boca Raton, the second Mandarin Oriental in Florida is also scheduled to open at year’s end. Located on East Camino Real, it is a nearby neighbor of the venerable Boca Raton Resort & Club and only the seventh Mandarin in the U.S.

The hotel will feature two rooftop pools; fine dining restaurants and bars, including Mandarin Oriental’s signature MO Bar + Lounge, on the rooftop with an outdoor terrace; and a Mandarin Oriental cake shop.

The Spa at Mandarin Oriental will offer holistic rejuvenation and relaxation, and a state-of-the art fitness center. A spokeswoman for the Mandarin declined to discuss the opening.

CLOSE TO THE AIRPORT

Three hotels are poised to open in the Dania Beach area south of Fort Lauderdale-Hollywood International Airport, situated in a region of explosive residential and commercial growth.

A 100-room Dolce Hotels & Resorts is due to open in Hollywood in April, as is another 100-room hotel, a Holiday Inn Express & Suites, in Miramar.