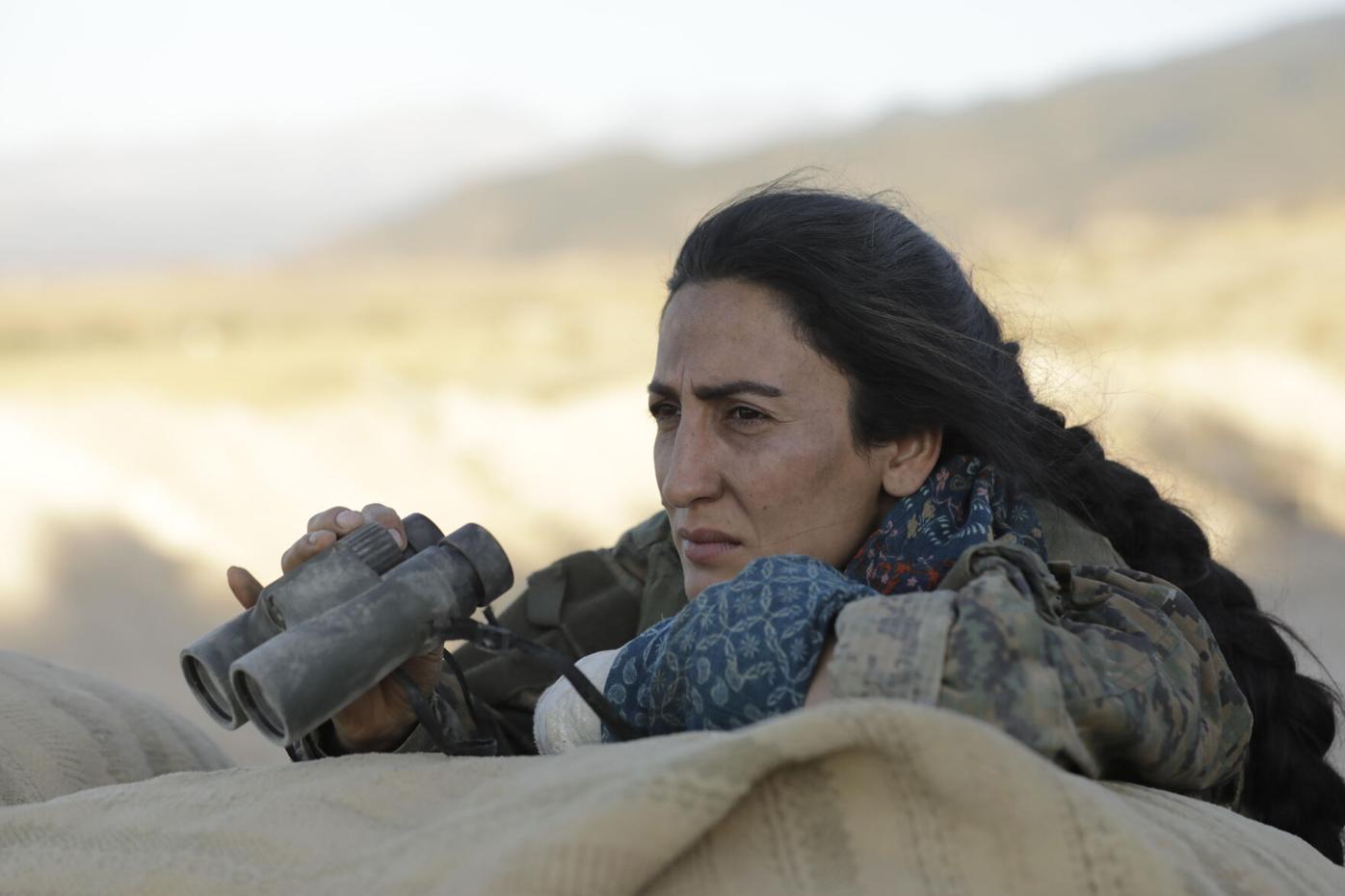 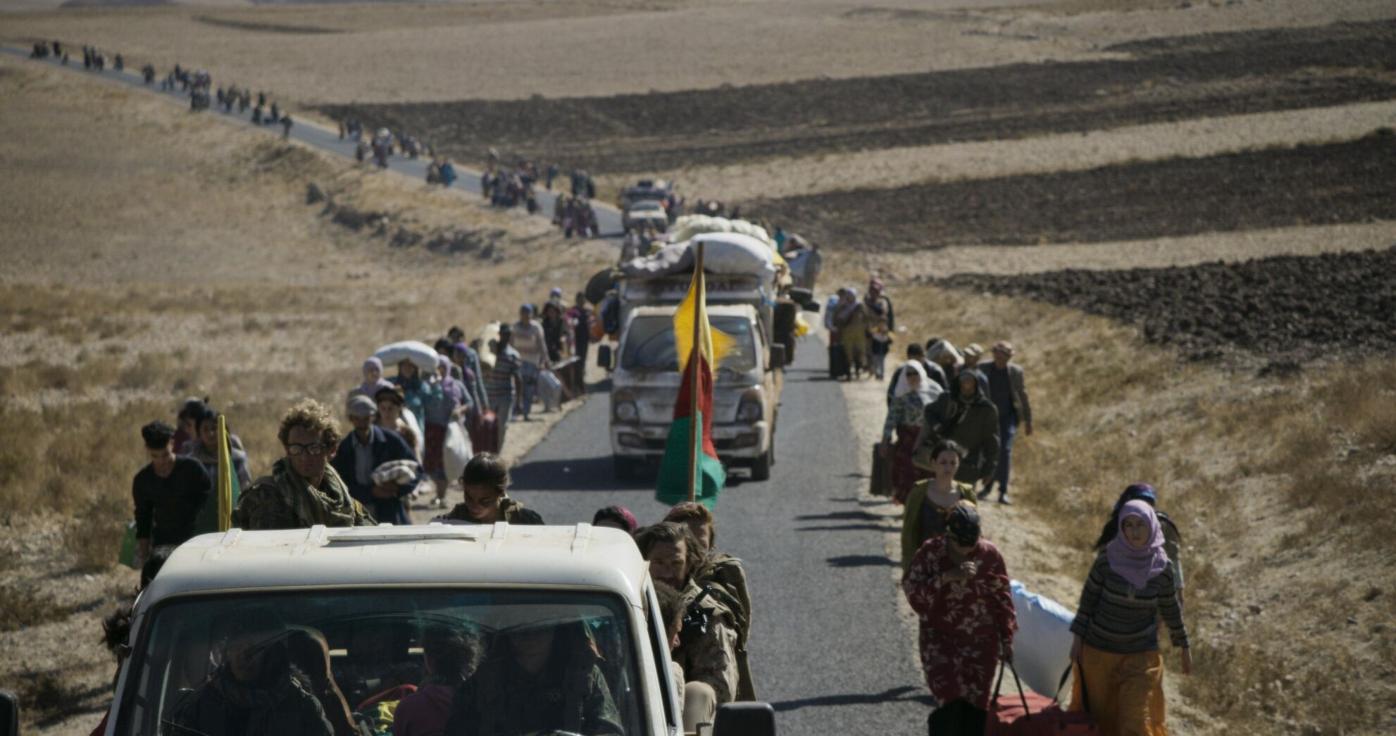 A YPJ truck drives alongside of stream of refugees in Syria. 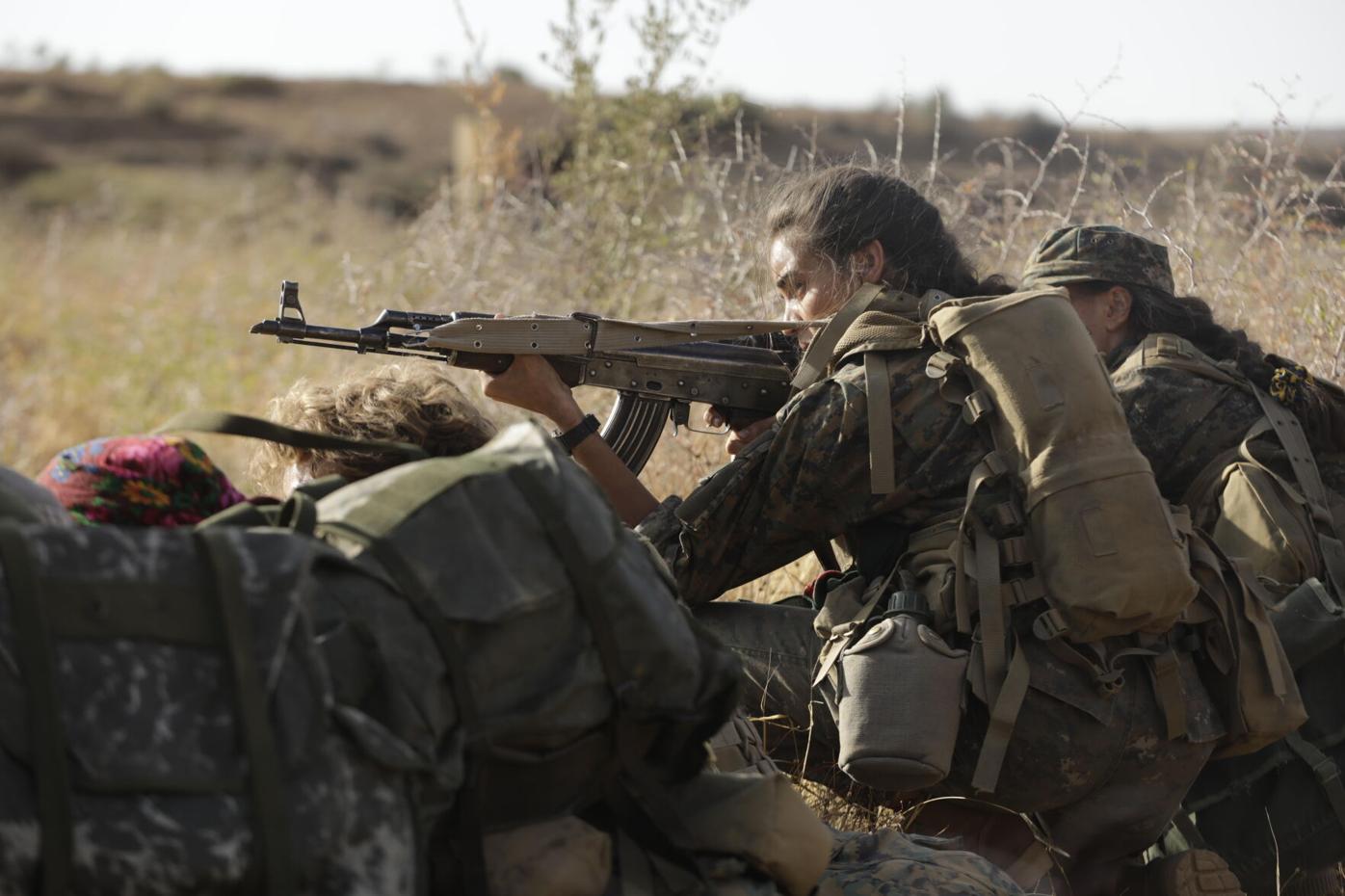 Souheila Yacoub as Sarya Dogan in ‘No Man’s Land.’ Set in 2014, the series paints the Syrian civil war as a global one: Six languages — French, English, Arabic, Kurdish, Turkish and Parsi — are spoken in the show. 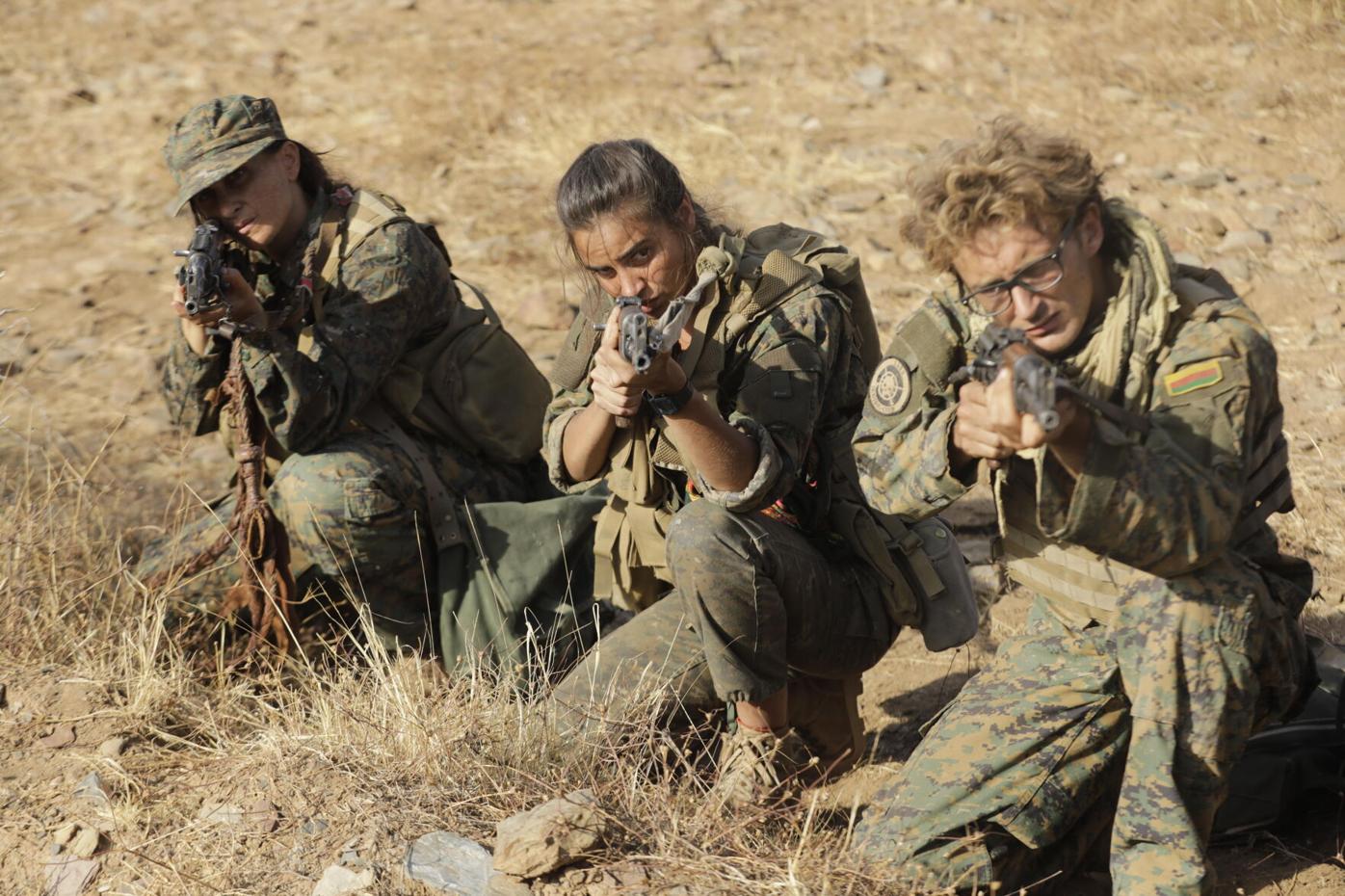 Luis Quintero (Luke Hornsby), right, is an American writer who joined the YPJ’s cause in the seies “No Man’s Land.” 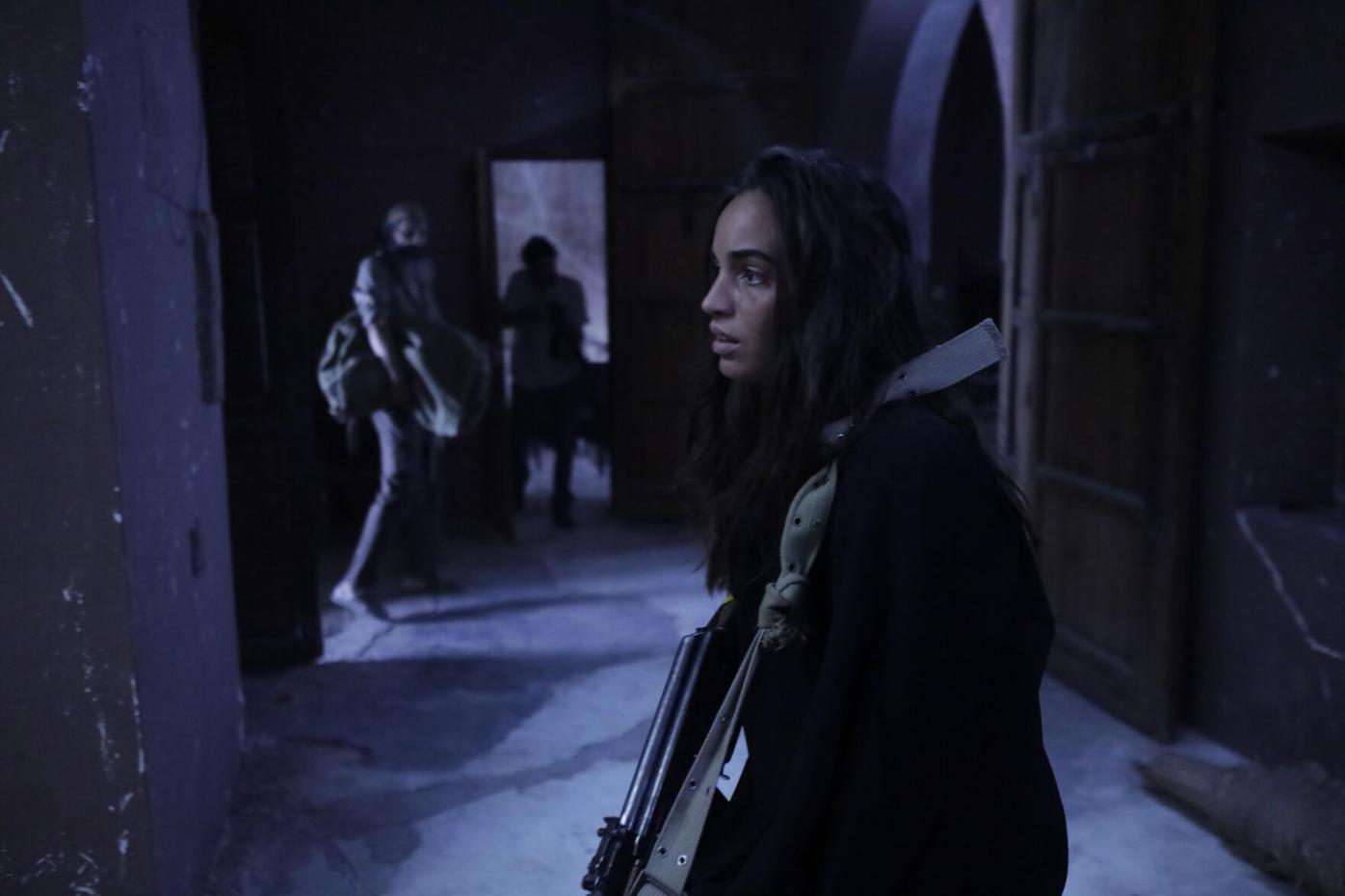 Sarya (Souheila Yacoub), the daughter of Kurdish immigrants, was raised in Paris. At 16, Sarya’s family returns to Kurdistan.

A YPJ truck drives alongside of stream of refugees in Syria.

Souheila Yacoub as Sarya Dogan in ‘No Man’s Land.’ Set in 2014, the series paints the Syrian civil war as a global one: Six languages — French, English, Arabic, Kurdish, Turkish and Parsi — are spoken in the show.

Luis Quintero (Luke Hornsby), right, is an American writer who joined the YPJ’s cause in the seies “No Man’s Land.”

Sarya (Souheila Yacoub), the daughter of Kurdish immigrants, was raised in Paris. At 16, Sarya’s family returns to Kurdistan.

Somewhere in Syria, the door slams open in a tiny cinderblock prison cell.

“My name is Antoine Habert,” he spits out in English. “I’m a French citizen.”

“Who sent you?” she replies in fluent French. “Where were you going?”

“You speak French?” Antoine asks, incredulous. “You have to help me. They’ve got it wrong.”

In this instance, the YPJ does have it wrong. The predominantly female Kurdish militia believes that Antoine is with their enemy, Islamic State. But the young engineer is simply searching for his lost sister, Anna (Melanie Thierry).

This pivotal scene comes from “No Man’s Land,” available now on Hulu. Set in 2014, the series paints the Syrian civil war as a global one: Six languages — French, English, Arabic, Kurdish, Turkish and Parsi — are spoken in the show. A trio of British school friends joins Islamic State, while a former American soldier and a French archaeologist are among YPJ’s international recruits.

“He says that it’s the same as in ‘36, when all these guys like Hemingway ... went there to fight,” said series post-production manager Eric Bassoff. “It’s the smell of adventure that some of the people were trying to find there.”

NOTHING LOST IN TRANSLATION

Through the lens of “No Man’s Land,” the conflict becomes a crucible of languages, identities and cultures, which required painstaking work from the series’ creators, performers and post-production team to ensure that no meaning was lost in translation.

Yacoub, for instance, learned Kurdish for the role.

“I think it’s beautiful to make us travel, to make the audience travel,” she said. “To make them believe that you can speak the language.”

The actress hails from Switzerland, was born to a Flemish mother and a Tunisian father, and speaks five languages (not including Kurdish): German, French, English, Dutch and Bulgarian.

“No Man’s Land” as a whole is similarly international. The crew is British, French, Belgian, Moroccan, Israeli, Syrian, Palestinian and American. Include the cast and the list extends to Italian, Norwegian, Kurdish, Turkish and Iranian people.

Six separate dialect coaches worked with actors to ensure accuracy. The show’s four co-creators — Maria Feldman, Amit Cohen, Ron Leshem and Eitan Mansuri — are originally from Israel, but three of them now live in the U.S.

“I remember myself as a child seeing a movie with Arnold Schwarzenegger playing a Russian,” Feldman said. “And the second he says a sentence in Russian — and I grew up in the former Soviet Union; my first language is Russian — the movie’s done for me. I don’t believe anything that is happening from this point. It’s ruined.”

Feldman’s relationship with languages is “very complicated,” she said. She spoke Russian through high school, then moved to Israel, where she spoke Hebrew. Now, she lives in New York, where she speaks English and finally feels like she fits right in.

The co-creator said she never understood why TV shows pour so much effort into time period accuracy but never seem to care as much about language. If a show is set in 2014, the industry often spends time and money to make sure no car made before 2014 drives through a scene.

One Islamic State-affiliated character, Nasser (James Krishna Floyd), was coached in an Egyptian Arabic dialect. Another, Iyad (Jo Ben Ayed), spoke Tunisian Arabic. A third, a Syrian sheik, was played by a Moroccan actor and coached in Syrian Arabic.

“Most of the shows don’t do that,” Feldman said. “They say, ‘OK, Arabic, whatever. Who knows what Arabic is what?’ But I think because the show was made not by Americans (or) English-speaking natives, I know — and I think each of us knows — how it affects us.”

Each character speaks only the language or languages they would speak in real life — no convenient English to appease an audience. The one exception is the prison-cell scene in which Sarya whips out fluent French, which becomes a key plot point.

Sarya’s Kurdish heritage becomes integral to her character — and her communication — so it was of the utmost importance that Yacoub properly learn the language. On the first day on set in Morocco, Yacoub worked with her Kurdish dialect coach. “He comes to me half an hour later and he said, ‘This is a joke, right?’” Feldman said. “’She’s Kurdish. You’re lying.’”

Yacoub, it turns out, has a natural knack for languages. She had no accent in Kurdish.

The actress and model spent two months rehearsing with three Kurds, learning stories about their families. She dived into background research and documentaries. At first, she thought YPJ members were tough, cool fighters.

But, as a director told her at her first audition, her character isn’t Angelina Jolie as Lara Croft.

“For a lot of the Kurdish girls, they’re not even 18 when they join the YPJ,” Yacoub said. “And they just want to defend who they are, and to defend equality and to defend love. And they smoke cigarettes and they drink tea and they laugh together, and they’re not counting their dead. They don’t attack, they protect.”

The responsibility Yacoub felt for getting the story right spanned the entire series, from casting and dialect coaches to the translators double-checking meanings in post-production. That included careful ADR, the process of re-recording audio in a studio.

“Sometimes, during post, we wanted them to say something a bit different,” Bassoff said. “For the ADR process, the director asked us to say, ‘OK, ask someone to say this line in Kurdish.’ Then we had to go again through the process of the coach and translator.”

The script was originally written in English, then translated, then spoken on set. Subtitles were written not from the script but from what the writer heard.

When Feldman watched the subtitled show, she would catch occasional discrepancies. So she would ask Bassoff, who would ask a translator, who might point out that a word had a double meaning.

“On this kind of show, you need to (be) realistic — we don’t want to hear anywhere that the Kurdish people say, ‘But it’s not even Kurdish,’” Bassoff said. “It’s a serious matter that we are dealing with in this show. And we don’t want to appear as a production that did it without taking care of that. It’s very, very important to have a proper subtitling.”

Bassoff, who lives and works in Paris, at times even asked the advice of those at a nearby Kurdish cultural center: “What does it mean? What does this say?”

That’s one question the makers of “No Man’s Land” hope viewers won’t have to ask — no matter their language.

"Language has a lot to do with your identity. And identity is a very big theme of the show." — Maria Feldman, one of the show's four co-creators.