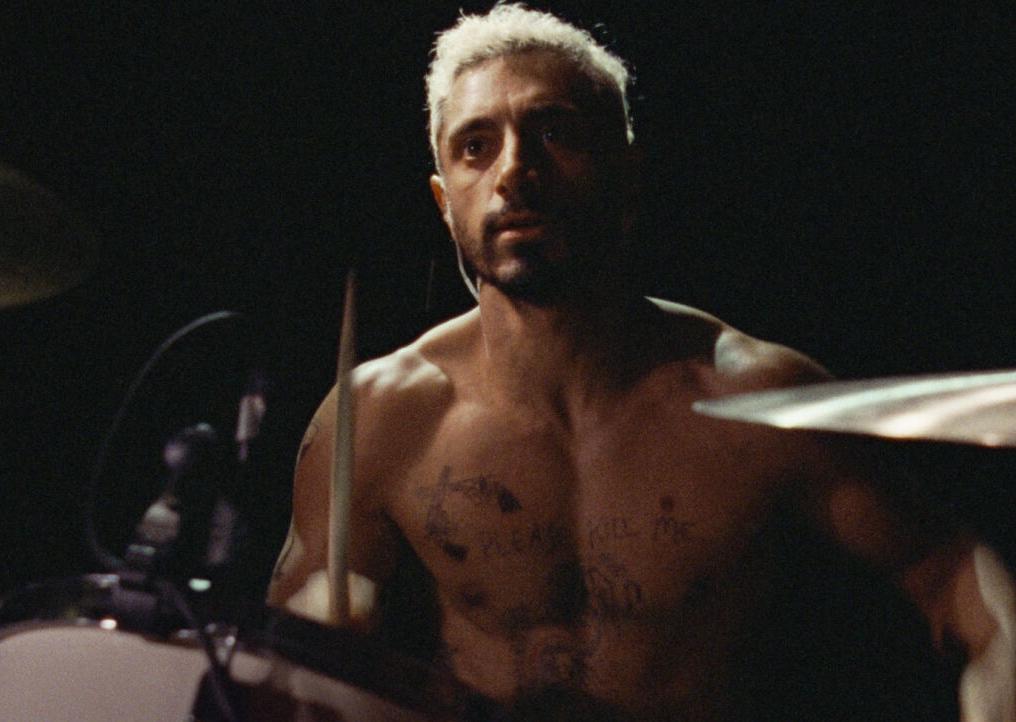 Riz Ahmed as Ruben in “Sound of Metal,” a drama about a drummer going deaf. 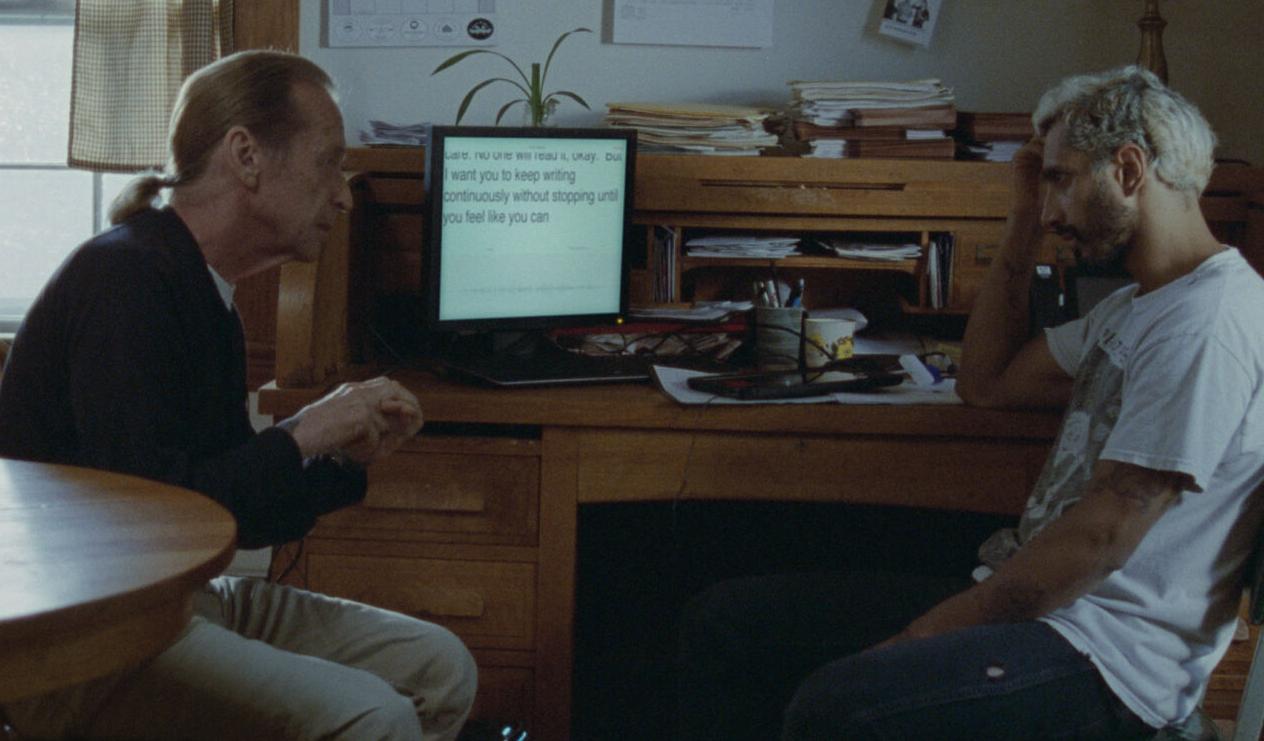 Paul Raci, left, as Joe and Riz Ahmed as Ruben in “Sound of Metal.”

Riz Ahmed as Ruben in “Sound of Metal,” a drama about a drummer going deaf.

Paul Raci, left, as Joe and Riz Ahmed as Ruben in “Sound of Metal.”

Every so often in the bruising, deeply moving drama “Sound of Metal,” the debuting director Darius Marder pulls off an abrupt shift in perspective. The camera will bring us close to Ruben (a sensational Riz Ahmed), a drummer who is going deaf, and make his consciousness our own: Voices suddenly become muffled, and a fuzzy, disorienting ambience floods the soundtrack. Then the movie will cut away to a wider shot, this time teeming with all the sounds he can no longer hear, whether it’s a bunch of people laughing around a dinner table, a pharmacist trying to give him instructions or Ruben’s own fingers tapping out a rhythm on a playground slide.

That rhythm is a reminder of his musical gifts, which means it’s also a reminder of what he’s lost. We first meet Ruben in happier times, drumming up a storm at his latest touring gig with Lou (Olivia Cooke), the singer-guitarist half of their punk-metal duo. They’re partners in life as well as art. The enormous Airstream RV they call home, lined with magazine clippings and stuffed with recording equipment, is a rickety testament to their love for music and each other. Both carry deep wounds, some more visible than others: Ruben is a four-years-clean drug addict, and a brief shot of Lou in bed reveals the cutting scars on her arm. You guess instinctively that they’ve taken turns carrying each other through significant trauma and pain.

But what happens next proves more challenging than anything they’ve yet experienced. Ruben begins to lose his hearing — a potential risk among professional musicians, as studies have noted, though the root cause is never identified. Nor is it especially relevant in this relentlessly forward-focused story. Ruben’s hearing loss is steep and swift: An early montage, teeming with the sounds of an ordinary morning — a coffee pot percolating, a smoothie being blended — is cruelly followed by a not-much-later sequence in which those noises are now indiscernible. (“Sound of Metal” makes notably inclusive use of closed captioning and subtitles: All the sound effects are described, and all the dialogue, signed or spoken, is transcribed.)

On the one hand, the movie’s intricate sound design (devised by Nicolas Becker) is both an ingenious technical display and a compassionate feat of identification, a means of entering Ruben’s headspace as he slowly comes to grips with the unthinkable. But that identification has its limits, and “Sound of Metal” grasps this in ways that most dramas of personal struggle and self-reckoning do not. By zooming in and out of his protagonist’s consciousness, Marder casts aside any pretense of omniscience; he empathizes, but he also knows when to detach. Ruben’s journey is a privilege to witness, but it’s one he’ll ultimately have to walk alone.

NOT HIS EARS THAT NEED FIXING

Lou seems to understand this instinctively, even if Ruben doesn’t. He’s intent on getting cochlear implant surgery, an expensive procedure that he hopes will save his career and salvage their life together. She’s more concerned about what could happen if he falls off the wagon, as it seems he likely will. And so she bids farewell to Ruben and checks him into a Midwestern sober house, a Deaf community run by a director, Joe (Paul Raci), who welcomes him in with the expected dose of tough love. Joe’s most significant lesson for Ruben is that being deaf is not a disability: It isn’t his ears that need fixing; it’s his worldview, his very sense of what’s possible, that needs expanding.

Ruben quietly disagrees, clinging to his dreams of regaining his hearing — and of being soon reunited with his love — even as he begins to learn American Sign Language and bond with fellow residents. One of the subtleties of the script (written by Marder and his brother Abraham Marder) is that you never quite know what Ruben is going to say or do next, and Ahmed’s captivating, beautifully underplayed performance sustains that mystery. Ruben’s physical appearance, with his bleach-blond hair and heavily tattooed frame, initially suggests the trappings of an angry young metal god stereotype, one that the movie quietly and convincingly dismantles.

But as he settles into his newfound community, his wide eyes convey an abiding mellowness of spirit, a thoughtfulness and an instinctive sense of caution, perhaps instilled in him over years of recovery. And “Sound of Metal,” taking its cues from Ruben, mercifully spares us most of the expected rehab-drama cliches: the violent relapses, the group-therapy wisecracks, the snide confrontations with someone keen on hazing the newcomer. A low-key realism prevails; you can feel Marder’s desire to let this story play out honestly, without any emotional jolting or prodding.

It comes as no surprise to learn that the actors playing Ruben’s fellow residents are deaf themselves, and that many of them are former addicts. As Joe, Raci enacts a loosely fictionalized version of his own life experience: A CODA (child of deaf adults) who served in Vietnam and struggled with addiction himself, he gives the kind of unassailable, bone-deep performance that feels less like a piece of acting than a state of being. It makes for a fascinating juxtaposition with Ahmed’s charismatic star turn, which aspires to and achieves a different kind of truthfulness. He’s a non-deaf actor playing a deaf man in a movie that is ultimately fascinated by the slippery nature of performance, by the roles we slip on, slip off and sometimes surrender depending on whatever fresh hell life throws at us.

Lou, played with piercing sensitivity by Cooke, offers her own case in point. For years, her identity — as an artist and a survivor — has been intimately bound up in Ruben’s, and their lengthy time apart will leave neither of them untransformed. One of the movie’s more intriguing ideas is that Ruben’s most insidious addiction may not involve heroin or any of the other drugs he’s used, abused and set aside. What he craves most of all, besides his sense of hearing, is all too relatable: a sense of control, a feeling that the past — and the future — might still lie within his grasp.

For its part, “Sound of Metal” often seems to be figuring out its own identity, and I mean that in the best possible sense. It’s conventional, but it also breaks ground: Angsty addiction dramas may be overrepresented in the movies, but sensitive, lived-in portraits of Deaf culture and community have always been in short supply.

“Sound of Metal” is an uncommonly graceful and intricate example of both, and it leaves Ruben and the audience in a markedly different place from where we began.

Many of the actors in the film are deaf and former addicts. One is a child of deaf adults who served in Vietnam and struggled with addiction.