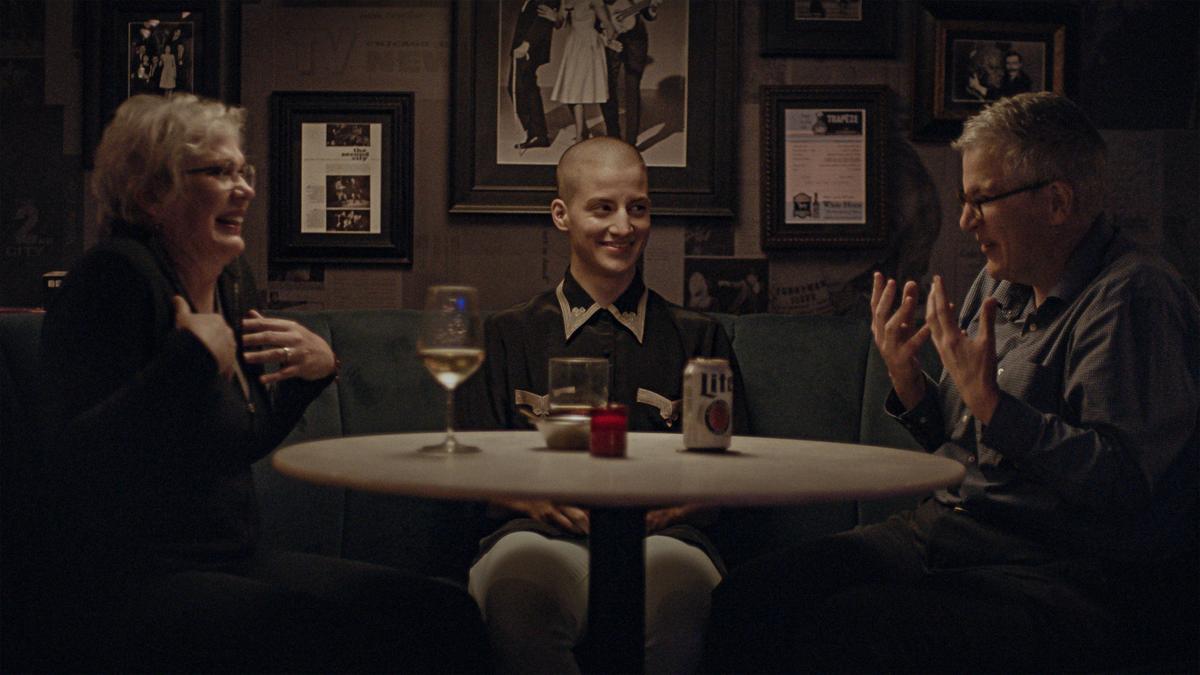 From left: Julia Sweeney as herself, Theo Germaine as Chris, and Abby McEnany as Abby in "Work in Progress" 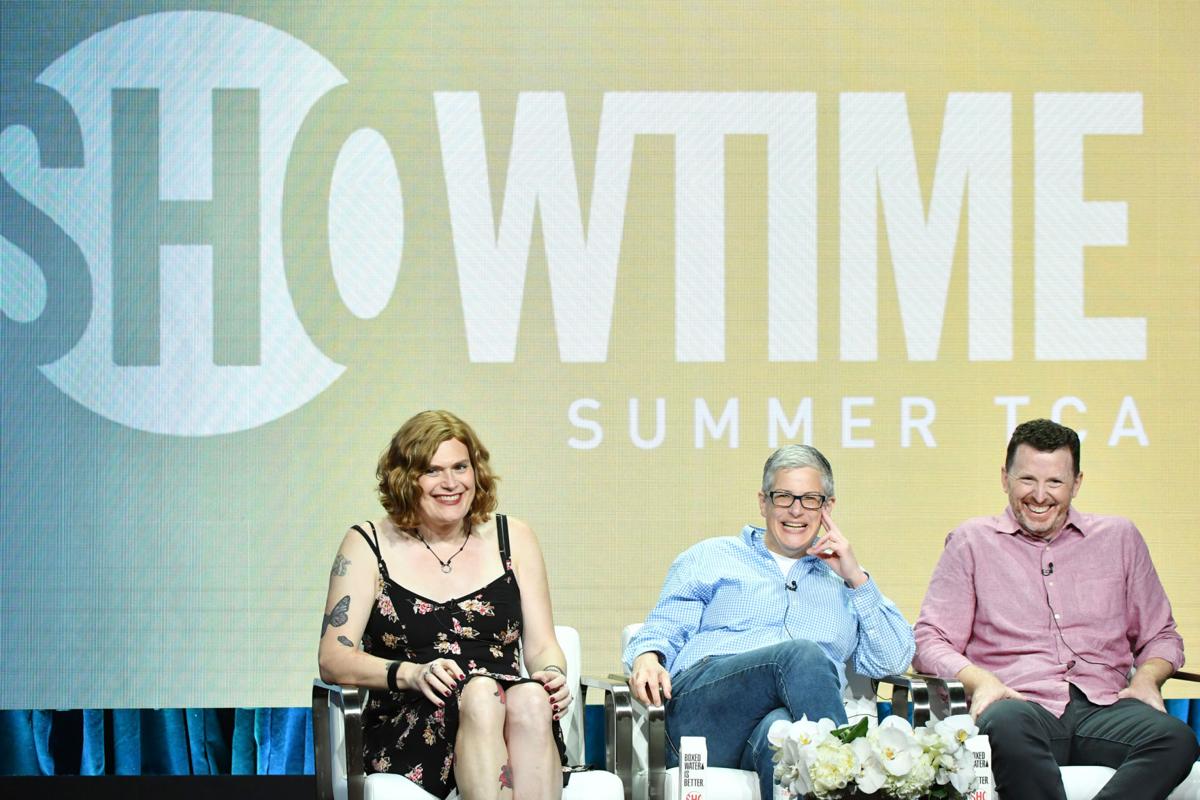 Lilly Wachowski, (left) Abby McEnany and Tim Mason of “Work In Progress” speak during the Showtime segment of the 2019 Summer TCA Press Tour at The Beverly Hilton Hotel on Aug. 2 in Beverly Hills, California.

From left: Julia Sweeney as herself, Theo Germaine as Chris, and Abby McEnany as Abby in "Work in Progress"

Lilly Wachowski, (left) Abby McEnany and Tim Mason of “Work In Progress” speak during the Showtime segment of the 2019 Summer TCA Press Tour at The Beverly Hilton Hotel on Aug. 2 in Beverly Hills, California.

CHICAGO — Second City is celebrating its 60th anniversary this year and there is a seemingly endless list of alumni — many who also spent time at iO Theater and the Annoyance — who have gone on to become household names. Many have moved to New York or Los Angeles, but on any given night somewhere in town you can find new and veteran performers knocking audiences back on their heels. Weirdly, Chicago has never been a TV comedy hub.

A few years back there was the low-key but sweet comedy “Shrink” from Second City alum Tim Baltz on NBC’s Seeso, the network’s first and short-lived attempt at a streaming service. There’s the brilliant and wonderfully specific “South Side” on Comedy Central, which was renewed for a second season, although co-creator Bashir Salahuddin (formerly a writer for “Late Night with Jimmy Fallon”) didn’t come up through the city’s sketch and improv ranks. In both cases, the creators are based in LA.

By contrast, the new comedy “Work in Progress” (Sundays on Showtime) comes from longtime improv performers who live and work in Chicago. And the story of how they got their show made is thrillingly atypical.

Abby McEnany and Tim Mason are 20-plus year veterans of the sketch and improv scene — and have been friends for just as long — but in terms of making television, they’re coming in cold. McEnany told me she’d never been on a set before “Work in Progress” — and she’s the star of the show. It’s a richly funny and semi-autobiographical portrait of depression, new love and simply trying to make it through the day in this bizarre world we all inhabit.

McEnany and Mason are the show’s creators, but they teamed up with a Hollywood veteran in Lilly Wachowski, a Chicagoan herself who, with her sister Lana, made “The Matrix” films, among others. On “Work in Progress,” she is a co-writer and co-showrunner along with McEnany and Mason.

I talk with all three during a set visit earlier this year. They are a study in warmly compatible contrasts. “We were talking about a production company name and I was like, why don’t we call it We’re Very Different People,” McEnany deadpanned. “Because we have zero in common — we’re white and we went to college, that’s pretty much it.”

Or as Mason put it: “My stuff tends to be really understated and Abby is not understated.”

She’s not. McEnany has the kind of exuberant energy that pulls you in like an embrace. Her thoughts bounce around excitedly and her laugh is glorious and long and punctuates her sentences. On the show, she’s dialed that back while retaining her dry, muttering sense of humor and appreciation for the absurd.

“It’s so weird because I’m a really private person, so this is a mind(warp). The vulnerability is weird.”

Mason chimed in: “It’s such a personal story and she is so open about depression, body issues, family. What she’s doing is so brave-slash … “

McEnany: “Stupid?” They both laughed.

In real life, McEnany is self-deprecating but also firm about what she believes, and perhaps those qualities helped her forge a friendship with Wachowski, who is contemplative and soft-spoken and doesn’t seek to dominate the room. Here’s how she described the first time she met McEnany, who lives just a few blocks away in Andersonville:

“I had quit my job — my job-quitting coincided with my transition, so it was like wholesale change — and I was like, what am I going to do?” Wachowski had stepped away from filmmaking after the first season of the Netflix series “Sense8,” and in the years since she has turned to painting. But initially she thought she might want to do stand-up comedy.

“And my partner said, ‘Well, why don’t you go talk to my friend, she’s been in the comedy scene for a long time and she’s awesome.’ So I went and I got coffee with Abby and we became super-fast friends. We talked about life and all sorts of stuff, depression and meds and what meds we were on.”

Here’s how McEnany tells that story:

Wachowski has done interviews over the years but she doesn’t particularly like the experience. Seeing her extemporaneous words committed to print makes her cringe. “I’ll talk and stuff, but no, I don’t want those words,” she trailed off. “Lemme write you something, I’ll write you my dialogue,” she joked.

Her involvement with the show brings not only practical experience but lived experience. Abby’s love interest on the show is a trans man, played by trans actor Theo Germaine of Netflix’s “The Politician.”