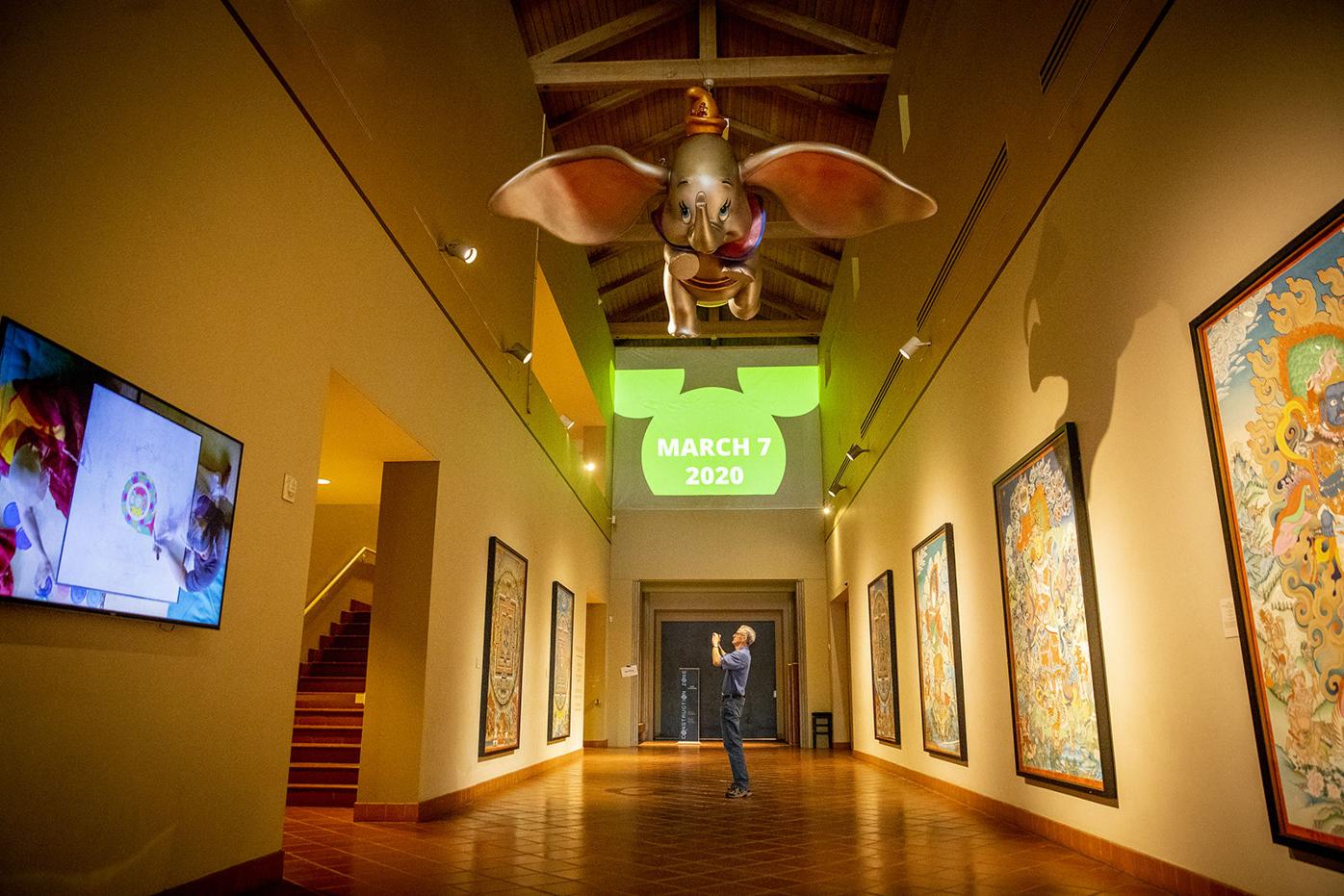 A view of “World of Disney-Flying Dumbo” at the entrance of the exhibition: Inside the Walt Disney Archives: 50 Years of Preserving the Magic, which celebrates The Walt Disney Company on the 50th anniversary of its archives, in Santa Ana, California. 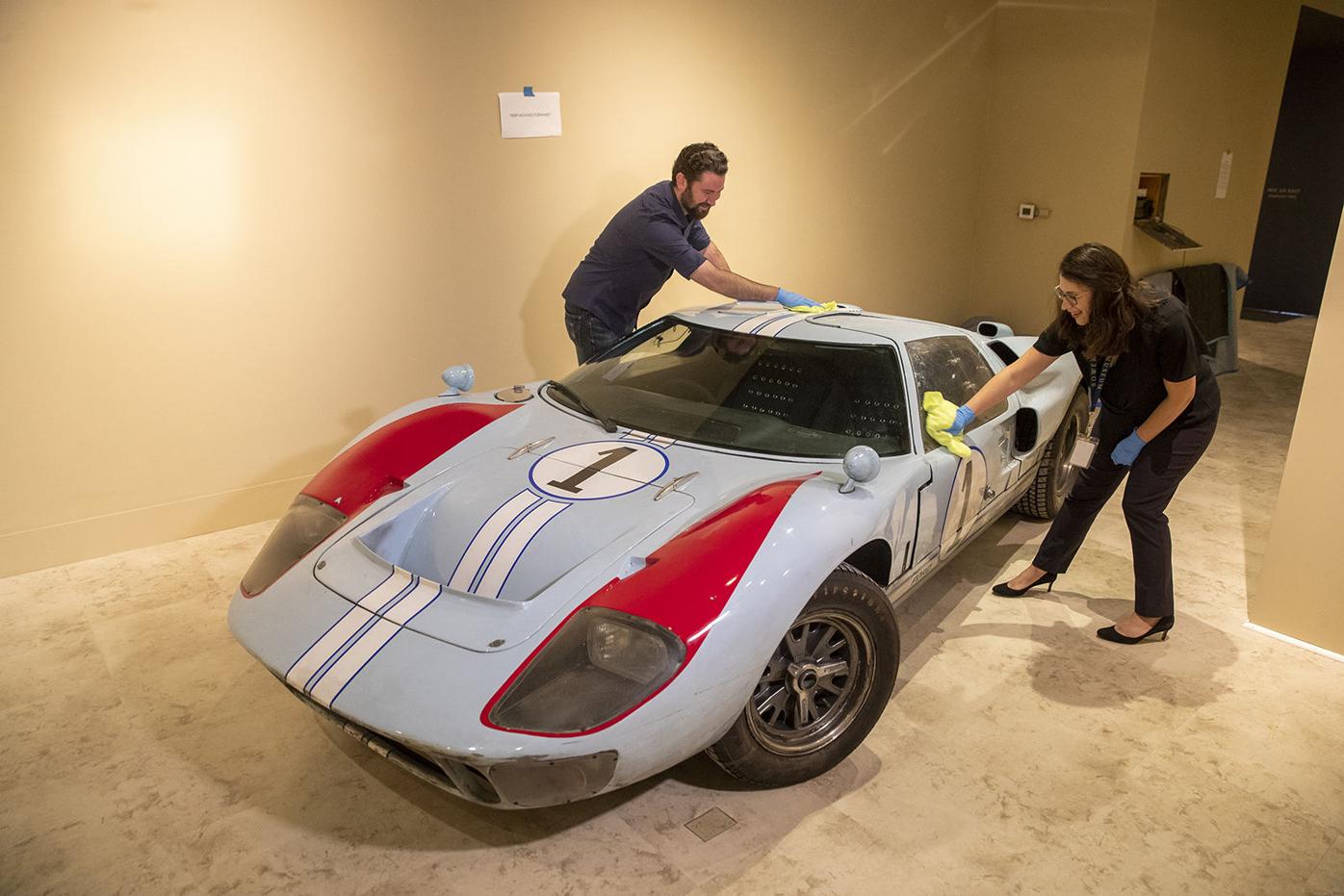 Victoria Gerard, V.P. Programs and Collections at the Bowers Museum, and Robert Maxhimer, Exhibitions Manager with Walt Disney Archives, wipe down the windows of the production vehicle LeMans Ford GT 400, used in the movie “Ford v Ferrari” at the Disney Archives. 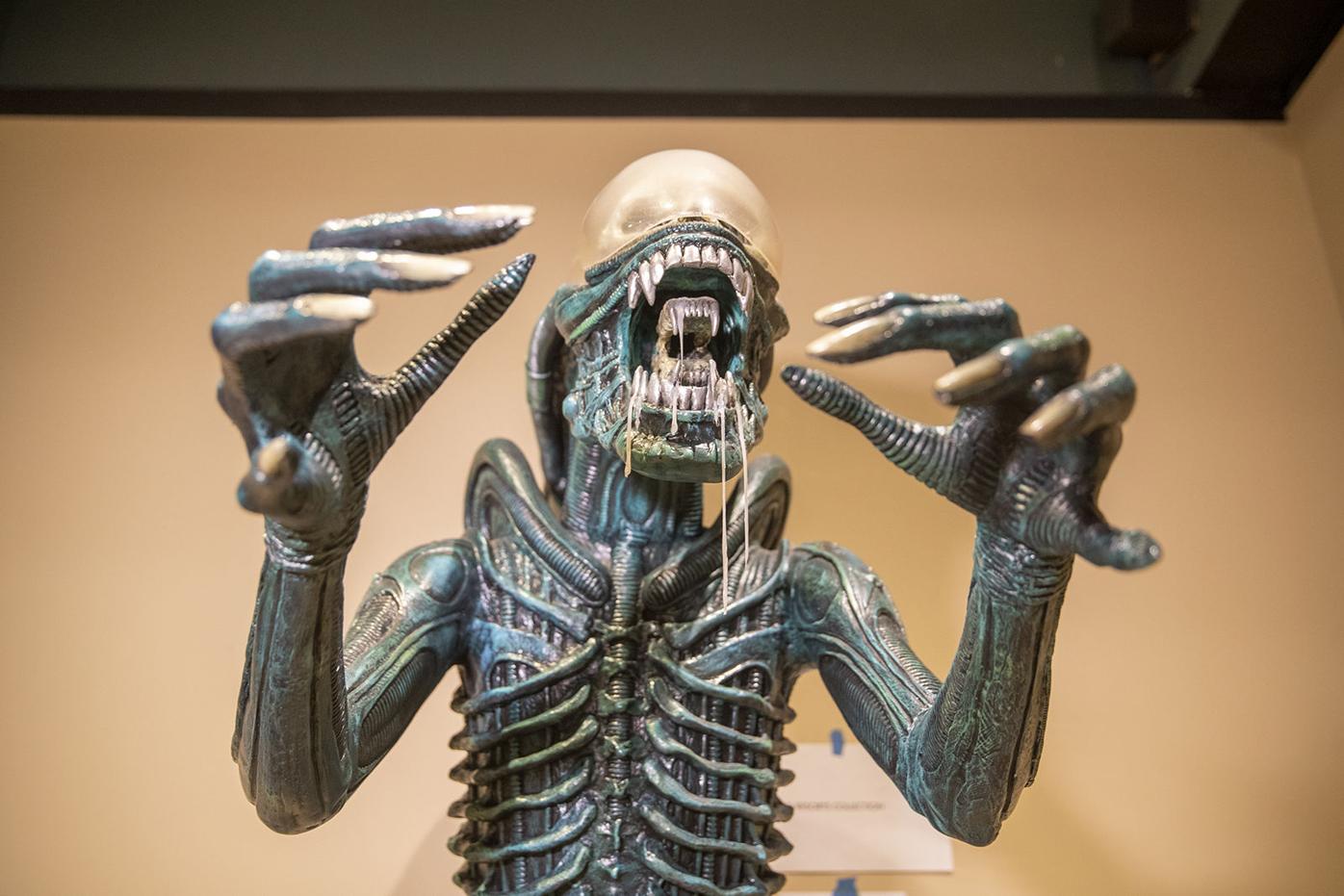 An animatronic alien from “The Great Movie Ride” at Disney’s Hollywood Studios at the Walt Disney World Resort on display in the Disney Archives. 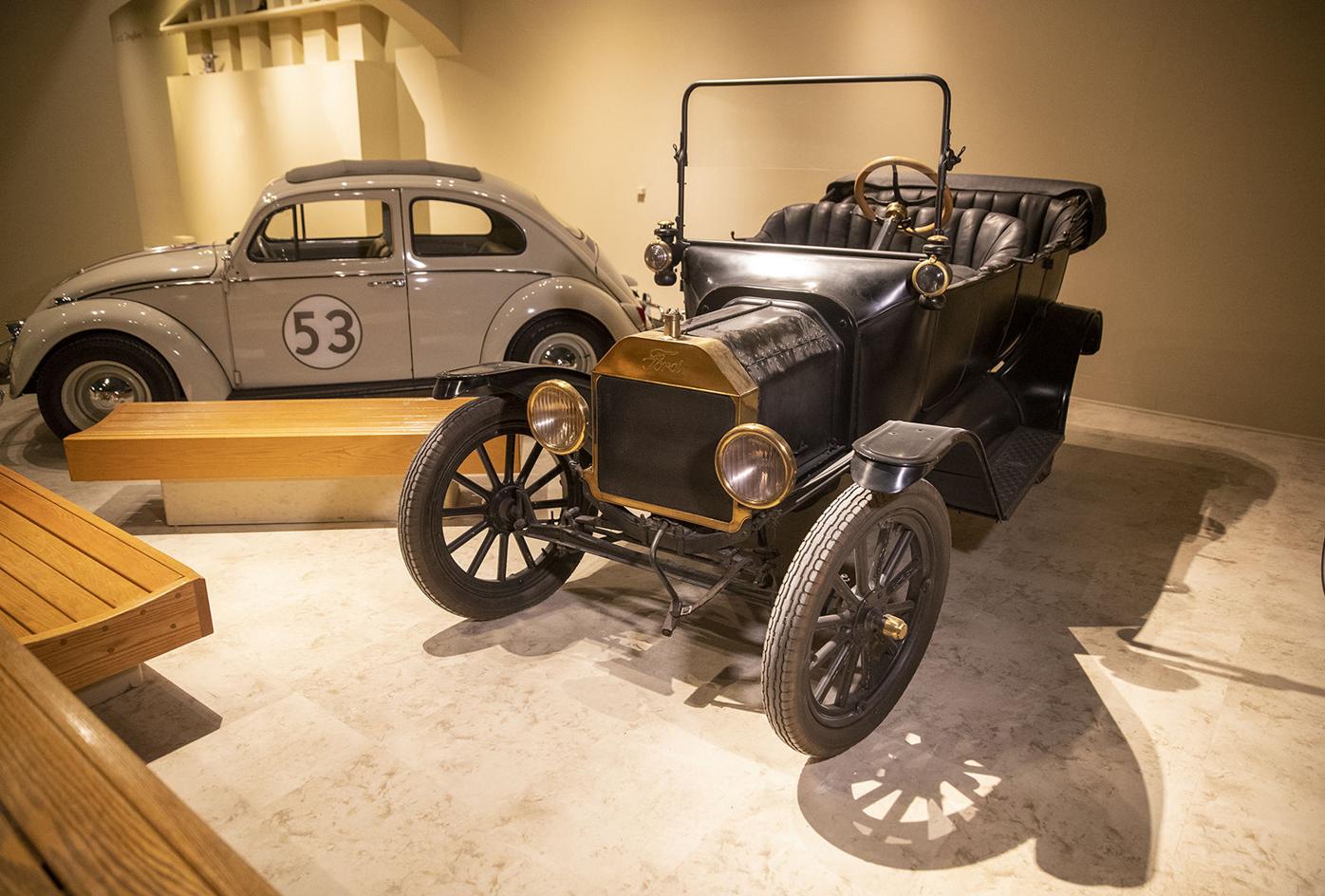 A view of the production cars from “Herbie Fully Loaded,” left, and The Absent-Minded Professor and “Son of Flubber” at the exhibition: Inside the Walt Disney Archives: 50 Years of Preserving the Magic in Santa Ana, Calif. 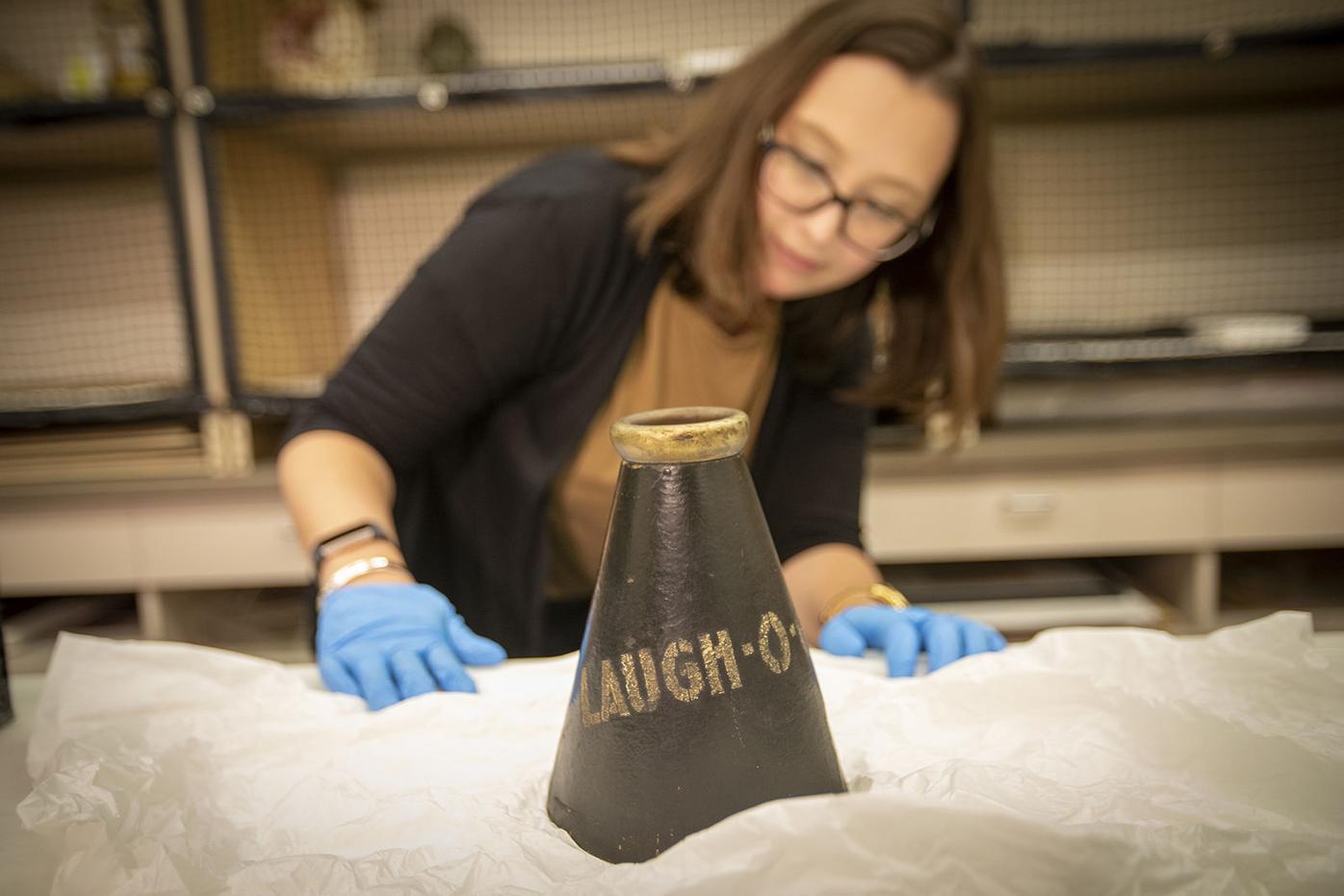 A view of “World of Disney-Flying Dumbo” at the entrance of the exhibition: Inside the Walt Disney Archives: 50 Years of Preserving the Magic, which celebrates The Walt Disney Company on the 50th anniversary of its archives, in Santa Ana, California.

Victoria Gerard, V.P. Programs and Collections at the Bowers Museum, and Robert Maxhimer, Exhibitions Manager with Walt Disney Archives, wipe down the windows of the production vehicle LeMans Ford GT 400, used in the movie “Ford v Ferrari” at the Disney Archives.

An animatronic alien from “The Great Movie Ride” at Disney’s Hollywood Studios at the Walt Disney World Resort on display in the Disney Archives.

A view of the production cars from “Herbie Fully Loaded,” left, and The Absent-Minded Professor and “Son of Flubber” at the exhibition: Inside the Walt Disney Archives: 50 Years of Preserving the Magic in Santa Ana, Calif.

LOS ANGELES — The Walt Disney Co. likes to say that Disneyland is not a museum — a phrase invoked whenever a beloved attraction undergoes a change that fans view as particularly painful. And yet there are most certainly aspects of Disneyland worthy of museum placement, and even times that Disney parks have acted like museums themselves.

So while an antique such as a grimy old telephone may not be as sexy as a larger-than-life, technologically advanced attraction such as the recently opened Star Wars: Rise of the Resistance, don’t think an old rotary phone can’t influence a creative life.

Just ask Kevin Feige, president of Marvel Studios and the man largely behind the sustained popularity of the modern superhero film. On his early trips to Disney’s theme parks as a child, seemingly random artifacts and props resonated with him as much as any ride. For Feige, these glimpses behind the curtain didn’t break the illusion of fantasy; instead, they inspired a deeper love for the art and the process behind it.

“I remember seeing Walt’s telephone at one point, and thinking, ‘I can’t believe Walt used this phone,’” says Feige, referencing some of the items that once belonged to the company’s patriarchal founder. “I found it very powerfully emotional.”

He had similar feelings about the Great Movie Ride at Walt Disney World, an attraction that stood as a testament to classic films and contained rare movie props and costumes in its queue. While that ride featured live actors and re-creations of film scenes ranging from “Casablanca” to “The Wizard of Oz,” it also hosted gallery-like display cases, the sort of borderline educational stuff that many theme park guests skip over.

“I would see the actual ‘Mary Poppins’ merry-go-round horse, or the actual underwater Nemo outfit from ‘20,000 Leagues.’ I was a little kid walking around the line in Great Movie Ride at Disney’s Hollywood Studios and thinking, ‘I want to do something that someday will be worthy of being preserved.’” says Feige, speaking via cellphone from Australia, where he was on the set of Marvel film “Shang-Chi and the Legend of the Ten Rings.”

In an industry not known for its permanence, it is perhaps no surprise that the Great Movie Ride is no more — its replacement, Mickey and Minnie’s Runaway Railway, opened last week — but Feige’s comments cut to the importance of not only remembering but also safeguarding our past. The value of pop art, and how revered and inspirational it can be to its audience, is arguably directly proportional to the care with which we treat it. At least that’s a core thesis of a new Disney-themed exhibit at Orange County’s Bowers Museum, which aims to look not only at Disney’s history but the art of conservancy itself.

For 50 years, the Walt Disney Archives has amassed one of Hollywood’s most extensive corporate histories, a collection that ranges from company memos — the initial contract for the silent 1920s Alice Comedies — to figurines from, yes, the recently retired Great Movie Ride. That Alice Comedies contract, as well as a xenomorph from “Alien,” which was once housed in that Walt Disney World attraction, are part of the expansive “Inside the Walt Disney Archives: 50 Years of Preserving the Magic,” an exhibit that continues through Aug. 30 at Santa Ana’s Bowers Museum.

It’s an exhibit the Bowers Museum has been angling for since 2017, when the institution’s VP of programs and collections, Victoria Gerard, placed a call to the Walt Disney Archives and asked to collaborate. While there’s an obvious local angle in nearby Disneyland — among the missions of the Bowers is to document how Orange Country has transformed — Gerard saw other benefits to a pop-focused exhibition with clear broad appeal.

“It’s no secret that museums are kind of struggling these days to reinvigorate a younger audience,” she says.

In turn, Gerard hopes the exhibition — a modified version of a show Disney debuted at Japan’s D23 Expo in 2018 — will deepen the understanding of archivists, librarians and historians while instilling some appreciation for the work the Bowers does year-round.

The exhibit is not set up by year or theme. It instead focuses on how the Walt Disney Archives actually work. Thus, there’s a dive into its 1970 founding under the tutelage of the late Dave Smith, who was hired to catalog Walt Disney’s belongings at a time when other studios were more likely to stage massive auctions, as well as a look at one of its current tasks, which is making sense of its recently acquired assets from the 21st Century Fox purchase.

Fox, says Walt Disney Archives director Becky Cline, has a photo collection that dwarfs the 5 million owned by Disney, with more than 20 million images that she and her team are sorting though. But in a not entirely unfamiliar Hollywood story, the studio’s actual collection of items from films before 1990 is rather hit-and-miss.

Props from Fox works, such as a vehicle from “Ford v Ferrari,” a puppet from “Isle of Dogs” and the “Wilson” volleyball from “Cast Away,” are on display at the Bowers; they’re intermixed with an attempt to create the Walt Disney Archives’ reading room, or detailed displays on how photos are digitized.

“This gave us the ability to really dive in and get into the weeds of what a collection is — what a prop collection is, a costume collection, and how we handle these things and what our research team or our digitization team does,” says Robert Maxhimer, who is overseeing the exhibit. There’s an extensive roster of related events, from a multicourse meal that puts a modern twist on some of Walt Disney’s favorite foods to talks that explore the unsung female artists who shaped Disney’s early animated films.

Says the Bowers’ Gerard, “I hope, of course, that people come see the show, but that this also inspires people to think about historic preservation, and why in an increasingly digital world it might be relevant.”

The digital revolution is another challenge for the 30-person team of the Walt Disney Archives, says Cline. When one sets foot in the Walt Disney Archives, it’s easy to be distracted. A case in a corner holds recent acquisitions, including the bejeweled and clasped giant storybook that opened 1963 film “The Sword in the Stone,” which was recently purchased via auction. File cabinets hoist up a pitchfork-wielding devil from the Mr. Toad’s Wild Ride attraction, and signs, such as an early 1980s marquee for the People Mover, once destined for garbage — or the homes, perhaps, of “enterprising” staffers — grace the walls.

And yet documenting the corporate rather than just the artistic history of the company is a mandate as well. The Bowers exhibit will contrast, for instance, ornate gems such as concept art from “Fantasia,” Haunted Mansion gravestones and a piano bicycle from Disneyland’s Golden Horseshoe with a 1952 memo written by Walt Disney, old company ID cards and, of course, a look at the Disneyland pitch portfolio.

While interviews for this story were conducted before it was announced that Bob Chapek would succeed Bob Iger as CEO of the company, Cline says she had already been grappling with how to collect company history in the email era. In the past, Cline says, when an executive retired, his or her correspondence was boxed up and sent to the Archives.

“But we don’t do that anymore,” Cline says. “It is a question. We’re still trying to figure it out ourselves, frankly. But we’re talking to our executives and asking them to think about their historical collections and their history with the company and asking them to put things in the Archives that they think is important after they move on or retire. It’ll be up to Bob to decide what he wants to turn over to the Archives when that time comes.”

“I hope, of course, that people come see the show, but that this also inspires people to think about historic preservation, and why in an increasingly digital world it might be relevant.”-- Victoria Gerard, Bowers Museum's VP of programs and collections.