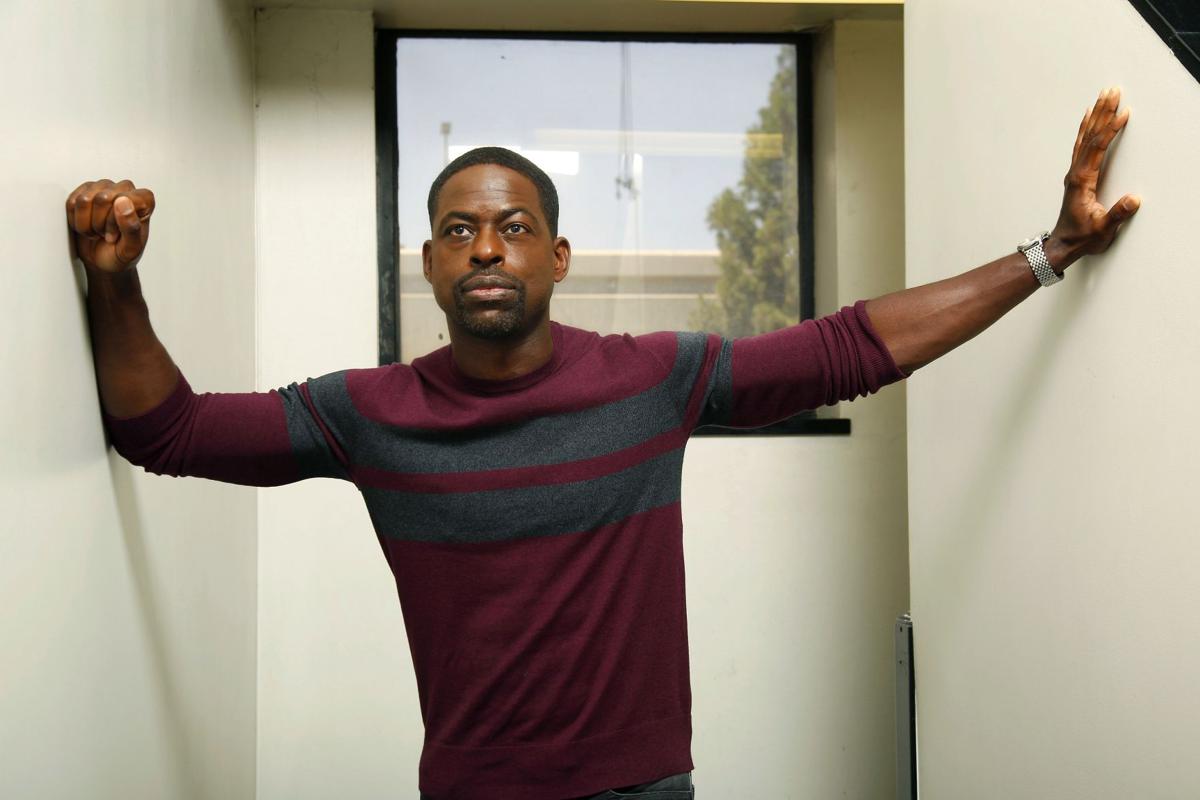 Movie theaters will see a one-two punch of Sterling K. Brown, whose family drama “Waves” will be followed a week later by animated sequel “Frozen II.” 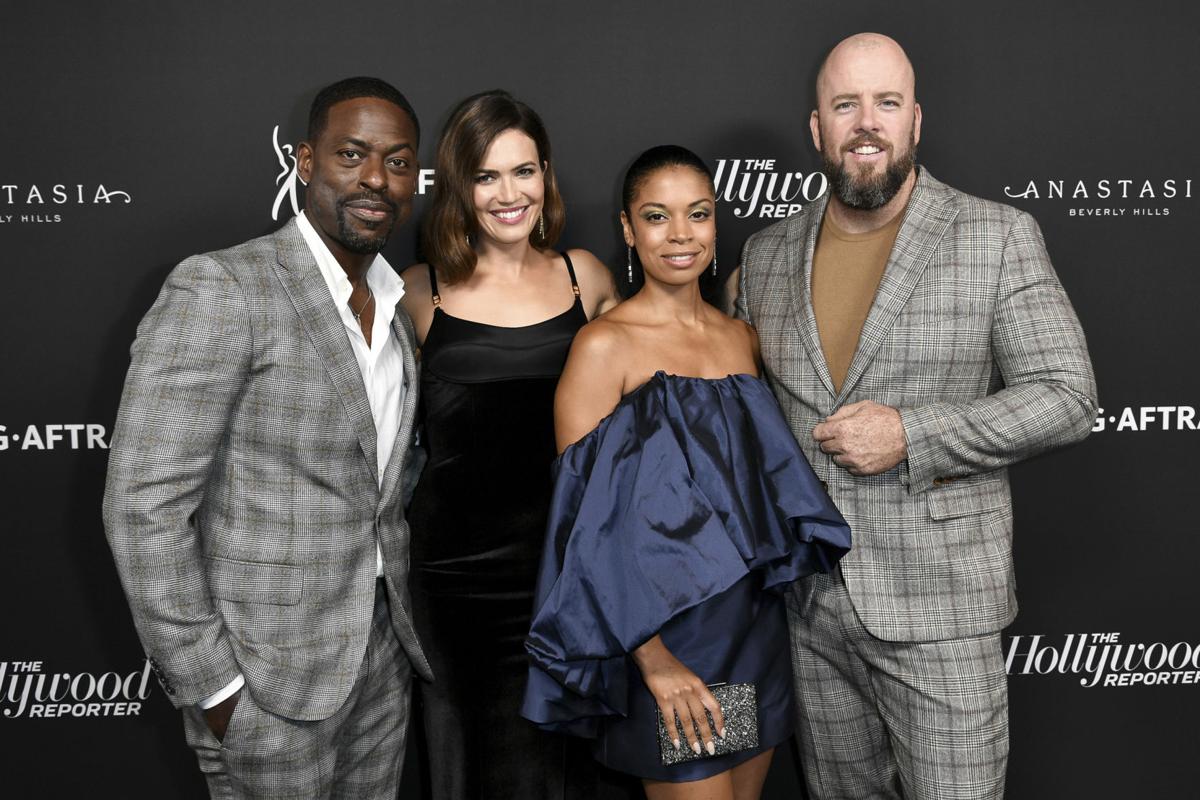 Sterling K. Brown, from left, Mandy Moore, Susan Kelechi Watson and Chris Sullivan attend the 2019 Primetime Emmy Awards in Beverly Hills, Calif. Brown plays a much different character than sensitive Randall Pearson in “This is Us” who deals with debilitating anxiety in his movie role as family patriarch Ronald Williams in “Waves.” 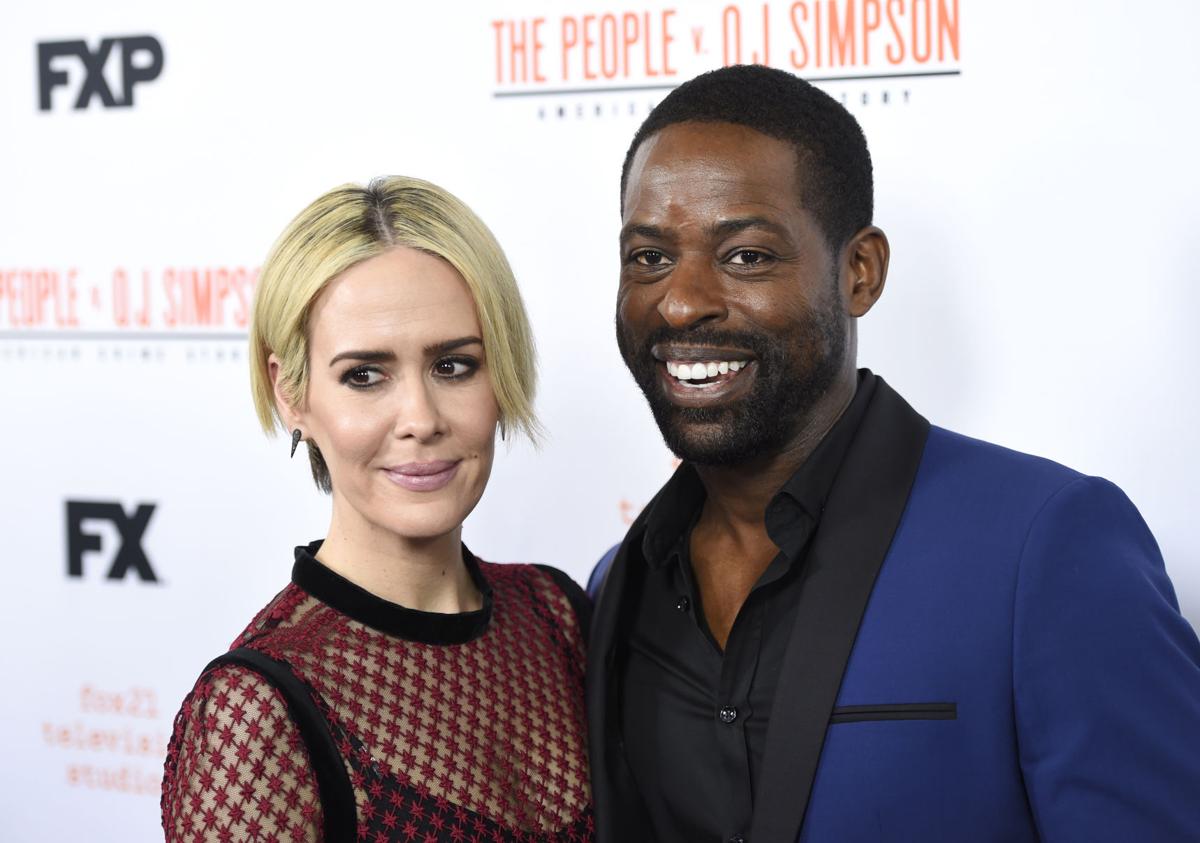 Sarah Paulson, left, and Sterling K. Brown arrive at the “American Crime Story: The People v. O.J. Simpson” For Your Consideration event in April 2016 at The Theatre at Ace Hotel in Los Angeles. Brown won an Emmy in 2016 for his breakout portrayal of attorney Christopher Darden. 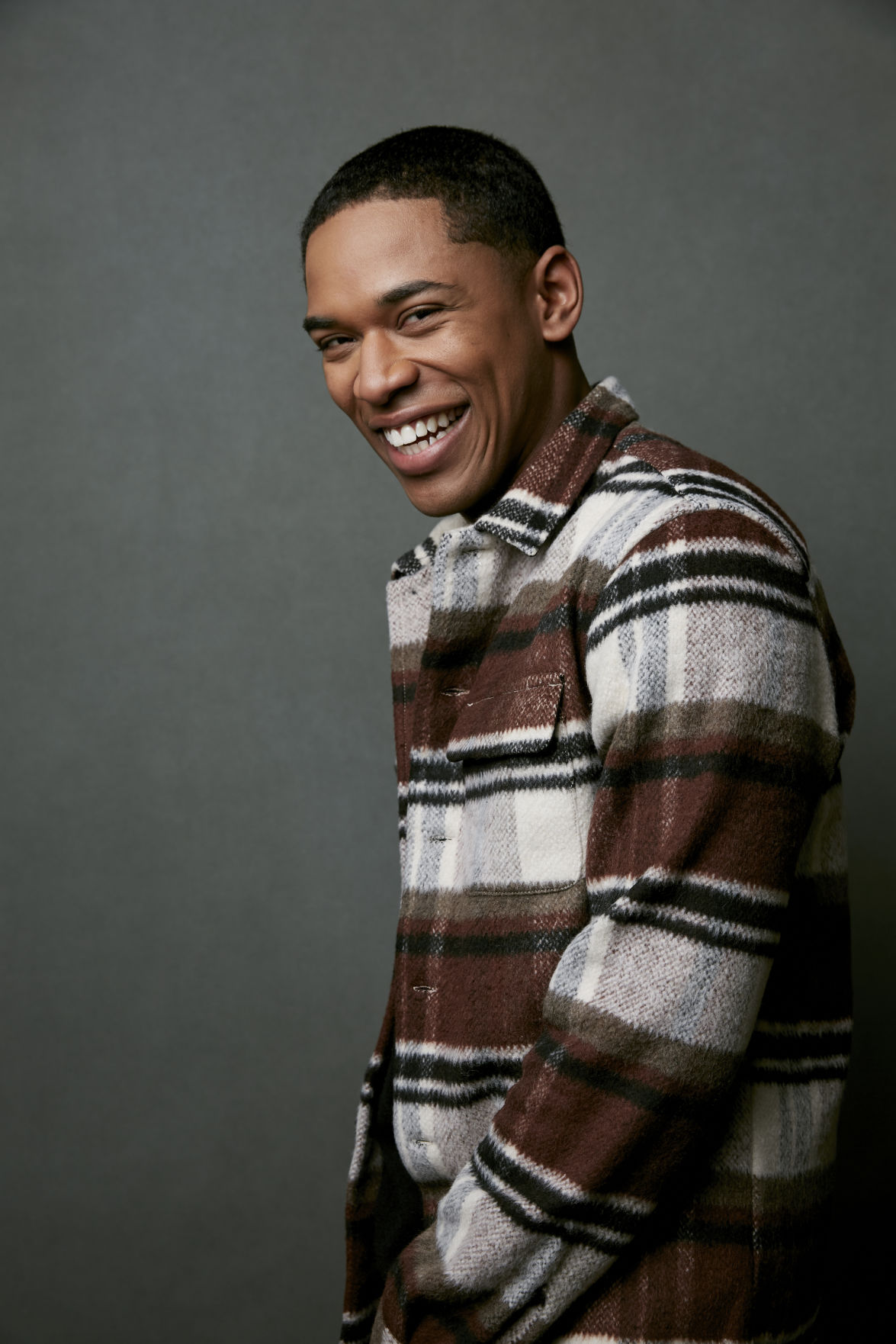 Kelvin Harrison Jr. poses for a portrait to promote the film “Monster” at the Music Lodge during the Sundance Film Festival on Jan. 22, 2018, in Park City, Utah. He stars with Sterling K. Brown in “Waves” as his teenage son and wrestler.

Movie theaters will see a one-two punch of Sterling K. Brown, whose family drama “Waves” will be followed a week later by animated sequel “Frozen II.”

Sterling K. Brown, from left, Mandy Moore, Susan Kelechi Watson and Chris Sullivan attend the 2019 Primetime Emmy Awards in Beverly Hills, Calif. Brown plays a much different character than sensitive Randall Pearson in “This is Us” who deals with debilitating anxiety in his movie role as family patriarch Ronald Williams in “Waves.”

Sarah Paulson, left, and Sterling K. Brown arrive at the “American Crime Story: The People v. O.J. Simpson” For Your Consideration event in April 2016 at The Theatre at Ace Hotel in Los Angeles. Brown won an Emmy in 2016 for his breakout portrayal of attorney Christopher Darden.

Kelvin Harrison Jr. poses for a portrait to promote the film “Monster” at the Music Lodge during the Sundance Film Festival on Jan. 22, 2018, in Park City, Utah. He stars with Sterling K. Brown in “Waves” as his teenage son and wrestler.

When fans see Sterling K. Brown on the big screen in A24’s acclaimed drama “Waves,” they’ll meet a very different family man from the one he plays on TV.

For four seasons and counting on NBC’s hit “This Is Us,” he’s brought sensitivity to Randall Pearson, the loving father and husband whose desire to please masks a debilitating battle with anxiety.

In “Waves,” written and directed by Trey Edward Shults (“Krisha”) and opening Nov. 15, the two-time Emmy winner puts a much tougher face on fatherhood as the tightly wound patriarch of a suburban South Florida family thrust suddenly into tragedy and crisis.

“For me it’s about, how does somebody love?” mused Brown, 43, between bites of breakfast on a recent morning in Los Angeles, considering the emotional gulf between Randall and Ronald Williams, the iron-pumping alpha dad in “Waves.”

“Randall wears his heart on his sleeve; he’s wide open,” he offered. “He wants everybody to be happy all the time, and he takes that on, and that can be overwhelming.”

In “Waves,” Brown’s Ronald confronts the hard truth that the pressure he has inflicted on others contributes to his own family’s fracture — particularly when it comes to his teenage son, wrestler Tyler (Kelvin Harrison Jr.), whom he pushes to perfection, and his quietly watchful daughter, Emily (Taylor Russell), whom he all but ignores until it’s too late.

Ronald knows the fragility of family, having lost his first wife before remarrying Catherine (Renee Elise Goldsberry), Tyler and Emily’s stepmother. Brown slipped into the first-person perspective of his “Waves” character, who sees himself as a caring father even if he’s blind to the toxic masculinity that fuels his tough love.

“I’ve seen black boys lose their lives,” he said. “This child (Tyler), not only do I want him to excel — I want him to return home.”

Race is a present but unspoken current that runs through “Waves” — and the reason why, at first, Brown candidly says he wasn’t sure he should take on the role.

Originally written from semiautobiographical elements by Shults, who is white, the project took on more complex dimensions when the filmmaker cast rising actor Kelvin Harrison Jr. who’d starred in his 2017 psychological horror film “It Comes at Night.”

Once Harrison signed on to play Tyler, the story became one of an African American family struggling to heal after a shocking act of violence. “Are we adding to a stereotype that’s already incredibly destructive?” Brown wondered. Over lunch with Harrison at one of his favorite Los Angeles cafes, Brown decided to do the film.

“I wanted to make sure he was going into it with eyes wide open,” Brown explained. “Once you do it, it’s not yours anymore. It belongs to the audience. And however they respond, you have to be willing to accept that.

“The fears ultimately felt like a reason why I should do it (rather) than why I should step away from it,” he said, “because I feel like this father is afraid for his child.” Plus, he felt an immediate connection to Harrison, who was already immersed in wrestling training when they had their first meeting.

On set in Florida filming the cast’s first scene together, as Harrison described it, Brown spawned a spontaneous moment of friendly father-son one-upmanship that instantly highlights the tensions brewing between the Williams men.

“He’s intense, and I love it,” said Harrison of Brown. “He came in hot that morning and ready to play. Someone like Sterling is so charismatic that he just draws you in; you just want to fight him. He’s playful, he’s like a German shepherd to me — strong and beautiful but at the same time really fun. You just want to wrestle.”

That’s what the actors did as the camera rolled and their banter gave way to a table-clearing arm-wrestling challenge. “Sterling goes, ‘Let’s go’ and I looked at him and said, ‘Let’s GO,’” said Harrison. “You look him in the eye and think, OK, I’m going to top that energy.”

Tragically, it’s that aggressive machismo that trickles down through the family, with devastating results. Brown, who has sons ages 4 and 8 with fellow actor Ryan Michelle Bathe, found he understood the parental anxieties behind Ronald’s domineering ways, and the search for healing that follows the film’s gutting midpoint crescendo.

He considered that the fictional Ronald might benefit from watching Randall’s journey on “This Is Us” — an arc that has led Brown to foster dialogues about mental health to his Twitter followers — and let out a roaring, mellifluous laugh.

“I can totally see Catherine, like, ‘You’ve got to check out this show,’ and him saying, ‘Let me get a few reps in first.’”

It was only a few days after Brown won an Emmy in 2016, for his breakout portrayal of attorney Christopher Darden in “American Crime Story: The People vs. O.J. Simpson,” that he debuted as Randall Pearson on the first season of “This Is Us,” for which he would win his second Emmy and a Golden Globe Award.

The years since have been stacked with TV and film appearances including “Marshall,” “Black Panther” and “The Angry Birds Movie 2.” This holiday season, a week after “Waves” debuts in theaters, he’ll lend his voice to the Nov. 22 animated adventure “Frozen II,” the sequel to Disney’s 2013 $1.2-billion megahit “Frozen.”

Set three years after the events of “Frozen,” which won the 2014 Academy Award for animated feature and original song, “Frozen II” finds Elsa drawn out of her happily-ever- after life by a strange voice that calls to her from the north.

Brown joins the cast as new character Lt. Mattias, the leader of a unit of soldiers, who has mysterious ties to Elsa and Anna’s family. He hasn’t seen the final film yet but described how the bits and pieces of footage glimpsed while recording with directors Chris Buck and Jennifer Lee brought the unusual process to life.

“When you’re the vocal talent you go in, you do a few hours, then you have weeks off,” he said. “And you’re just reading with Chris and Jen, who are awesome. Short of actually getting to play with your actual castmates, they give the best reads that make you laugh and give you something to respond to. Then you see it put together and you go, ‘Huh — this works.’

“It’s crazy! People are working there around the clock, they have music pumping, they’ll bring in dogs for people to pet because it lifts people’s morale,” he said, a twinkle in his eye. “Yeah, the house the Mouse built thinks of everything.”

He played coy on whether he sings in the film alongside Idina Menzel, Kristen Bell and Josh Gad — but teased his guest stint as a musician on the upcoming season of Amazon’s “The Marvelous Mrs. Maisel” (streaming Dec. 6), a role opposite Rachel Brosnahan that was written for him. “I can carry a tune without embarrassment,” he said with a smile.

And yet, he admits, when he first joined Goldsberry, Harrison, Russell and director Shults at a burger joint in Hollywood, Florida, to begin work on “Waves,” there was one person he wouldn’t sing in front of.

“I had seen Renee in ‘Hamilton’ and she was extraordinary, obviously, Tony Award winner that she is,” he said of Goldsberry. “I had a big talent crush to begin with. She comes to the dinner and I literally start playing ‘Hamilton’ — not singing, because I didn’t want to sing terribly over her exquisite vocals — but I lip-synched ‘It’s Quiet Uptown.’ Totally fan-boyed out!”

Brown’s busy current slate includes his ongoing arc on “This Is Us,” which was renewed for three more seasons in May, as well as the film and TV projects he is developing for his own production company, Indian Meadows, named for his St. Louis hometown so that, according to Brown, “I never forget where I come from.”

As part of the company’s mission, he says he is guided by the idea of “intelligent diversity.” “I want to see people of color and marginalized voices front and center,” he said. “African American, obviously, but whether that’s of the LGBTQ community, Asian or Latinx, I just want to make sure that we’re not just the cool sidekicks but that the stories are about us.”

The power of onscreen representation is undeniable, he added. “You go long enough without seeing yourself and you can fool yourself into thinking your life doesn’t matter.”

Assessing the professional highs and lows he’s amassed in his career to date, Brown said, “There are so many things that can bring you joy other than the things you think you should be doing. I love what I do. And if I didn’t love it for the first 13 years of my career, I would have left it a long time ago.”