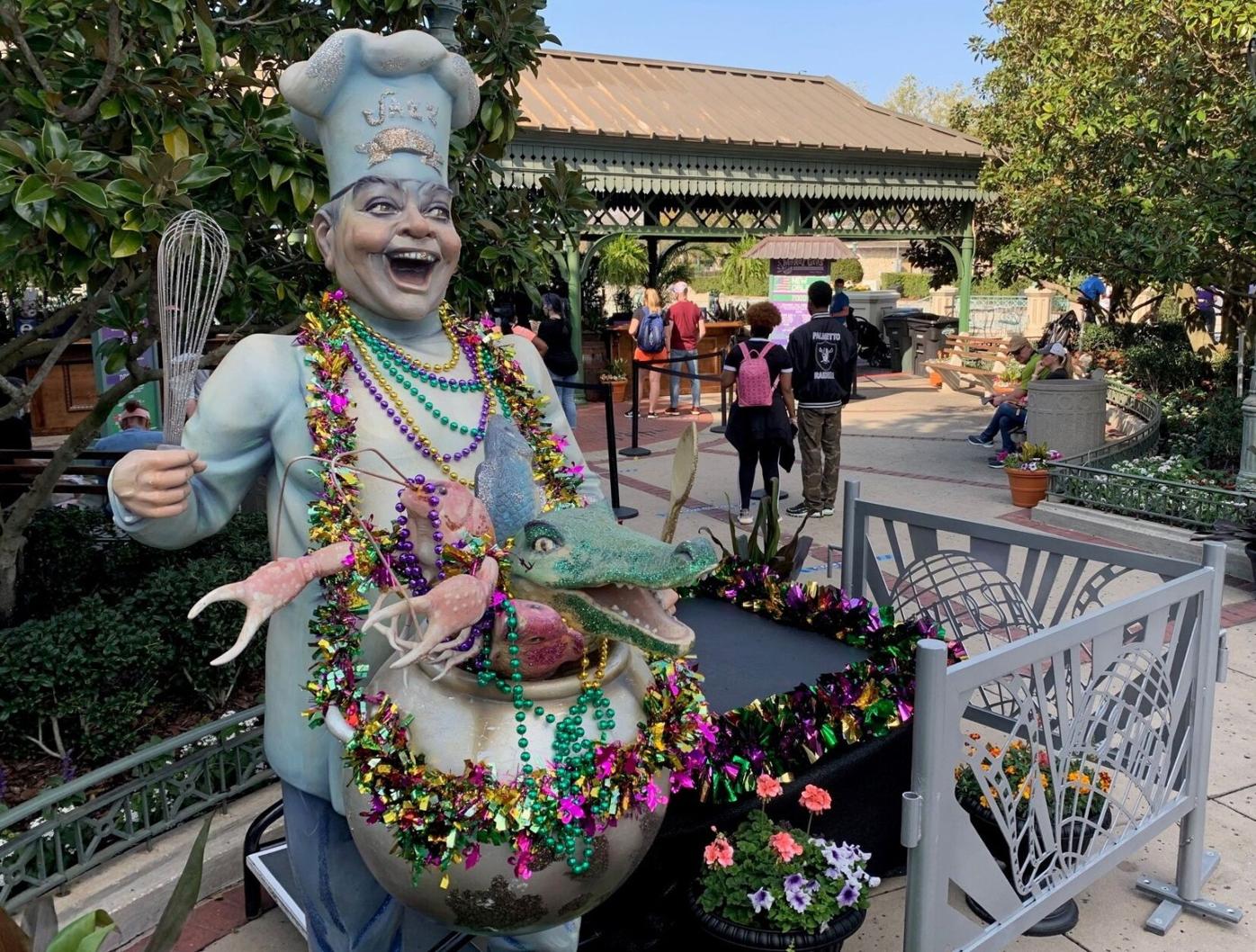 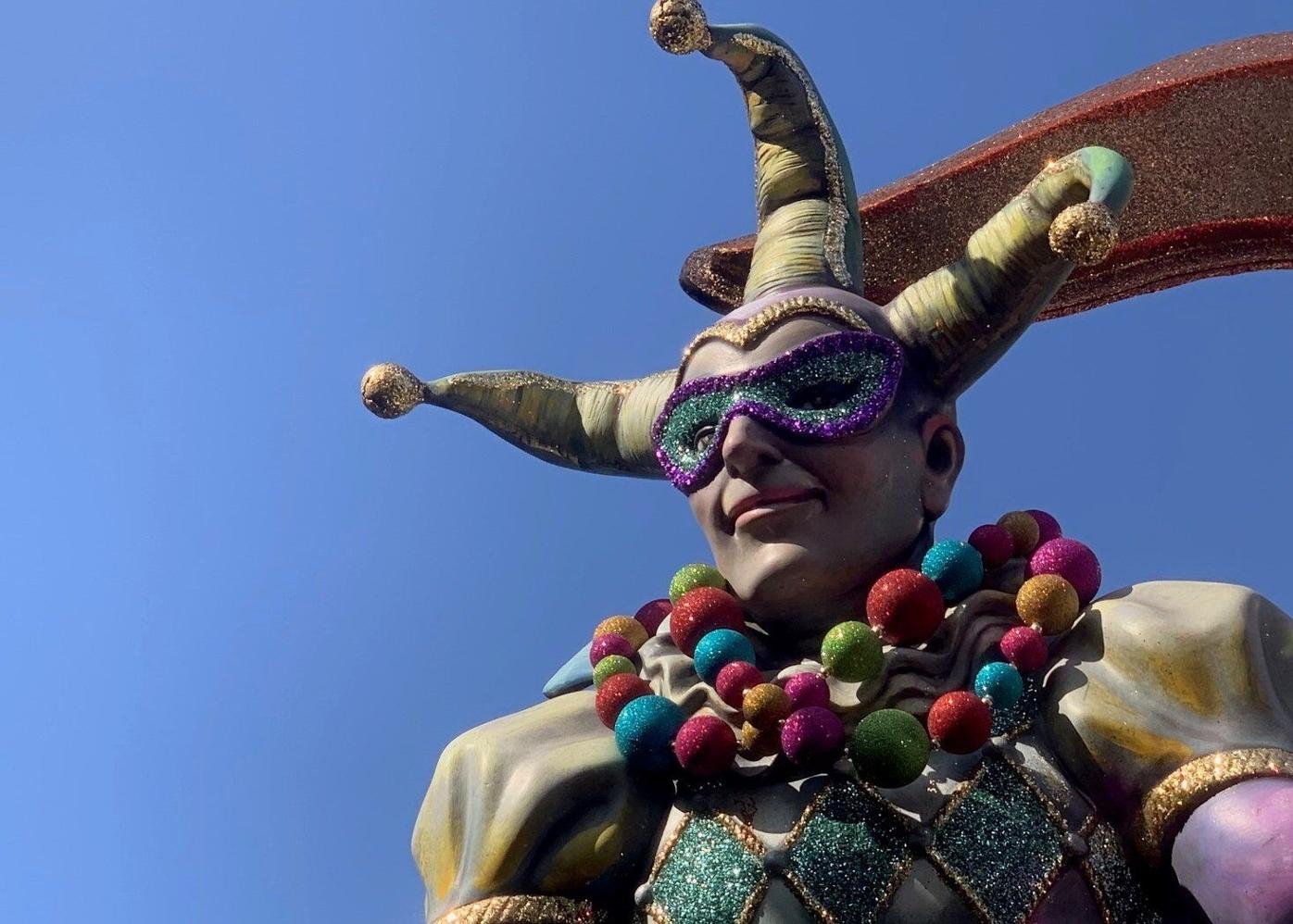 For its Mardi Gras celebration in 2021, Universal Studios is not having a parade. However, its floats are out in the theme park for closer-than-usual inspection by visitors. 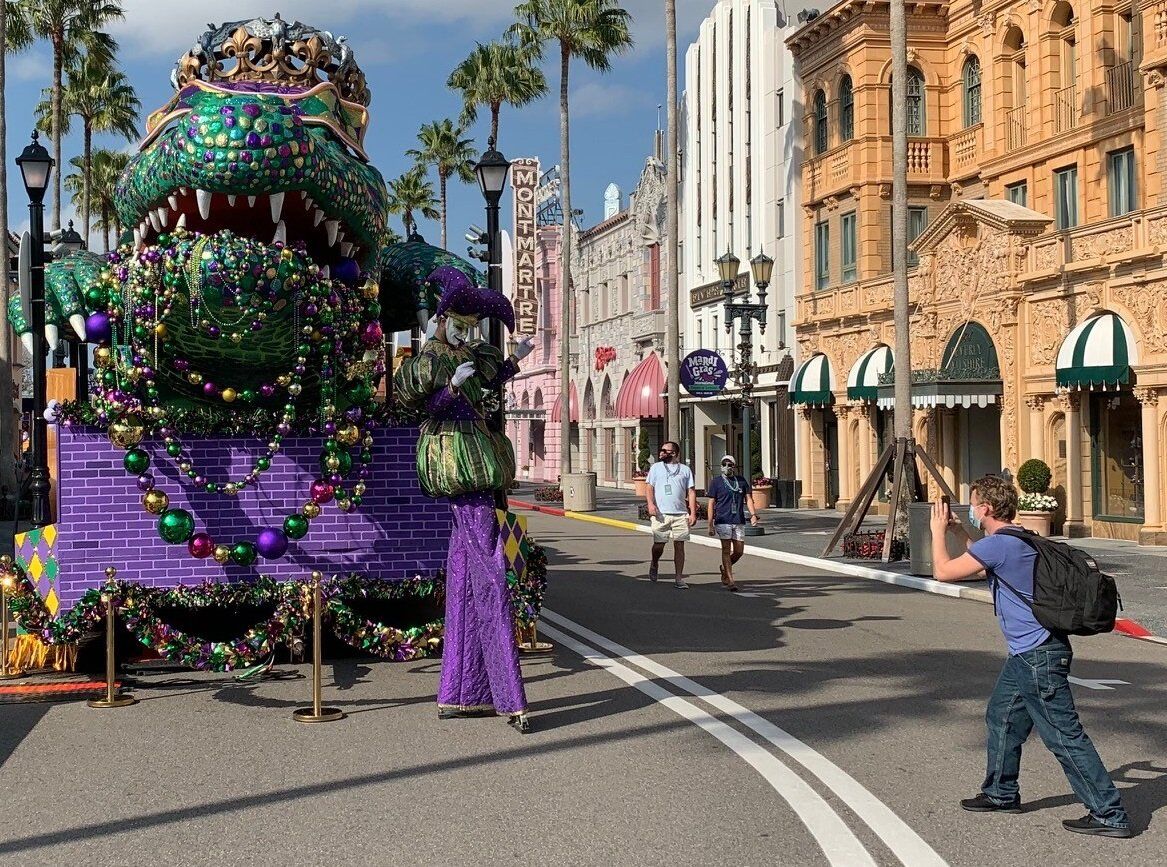 For its Mardi Gras celebration in 2021, Universal Studios is not having a parade. However, its floats are out in the theme park for closer-than-usual inspection by visitors and Instagram photos. 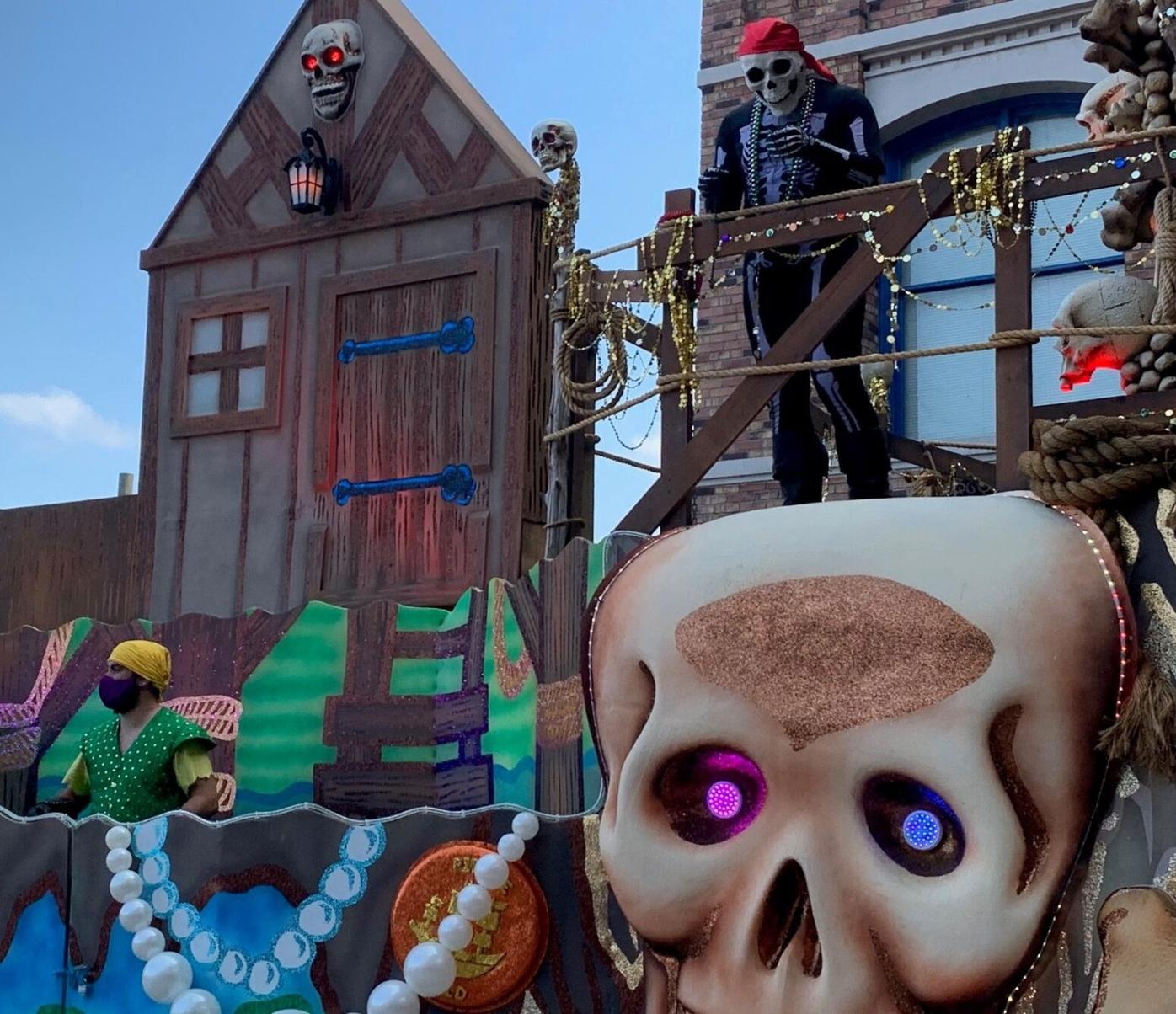 For its Mardi Gras celebration in 2021, Universal Studios is not having a parade. On the streets are a handful of pirate-themed models plus several of Universal’s traditional floats, including King Gator, who got a shiny, shiny facelift just last year. 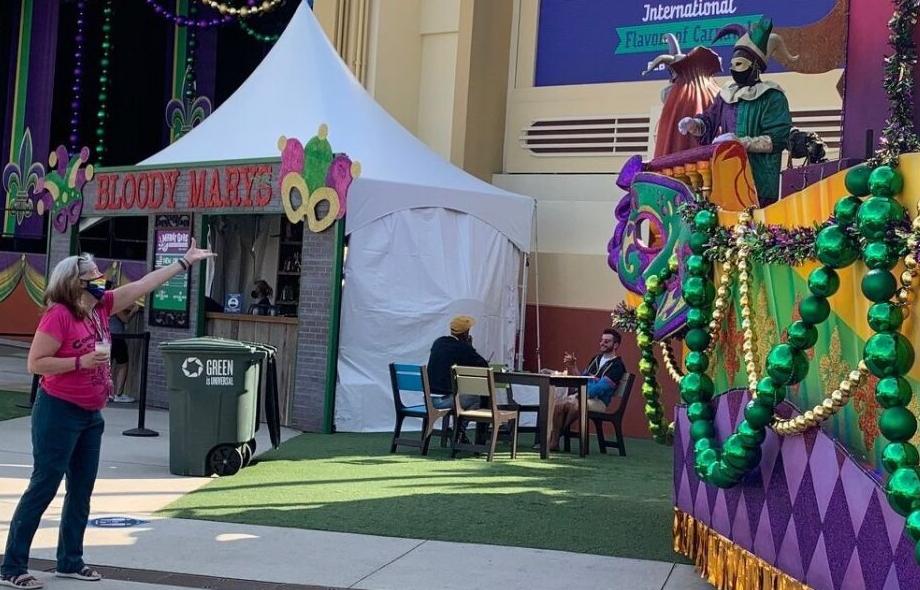 Universal Studios visitors vie for beads tossed from a stationary float in the theme park's Music Plaza during the attraction's Mardi Gras celebration. 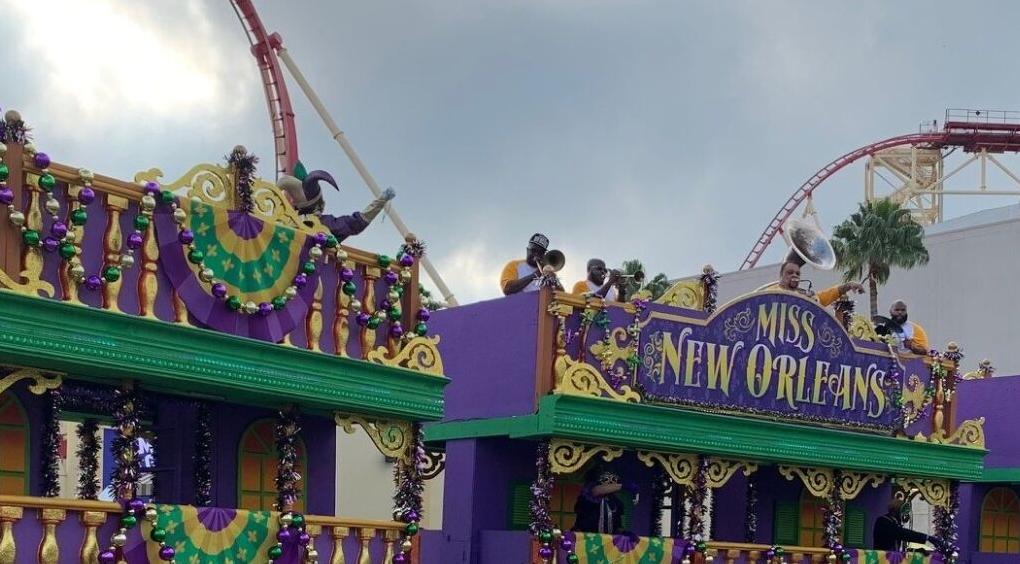 Universal Studios visitors dance while a brass band plays from the upper level of the Miss New Orleans float at the theme park's Mardi Gras celebration, which has altered some of its offerings and health precautions during the coronavirus pandemic. 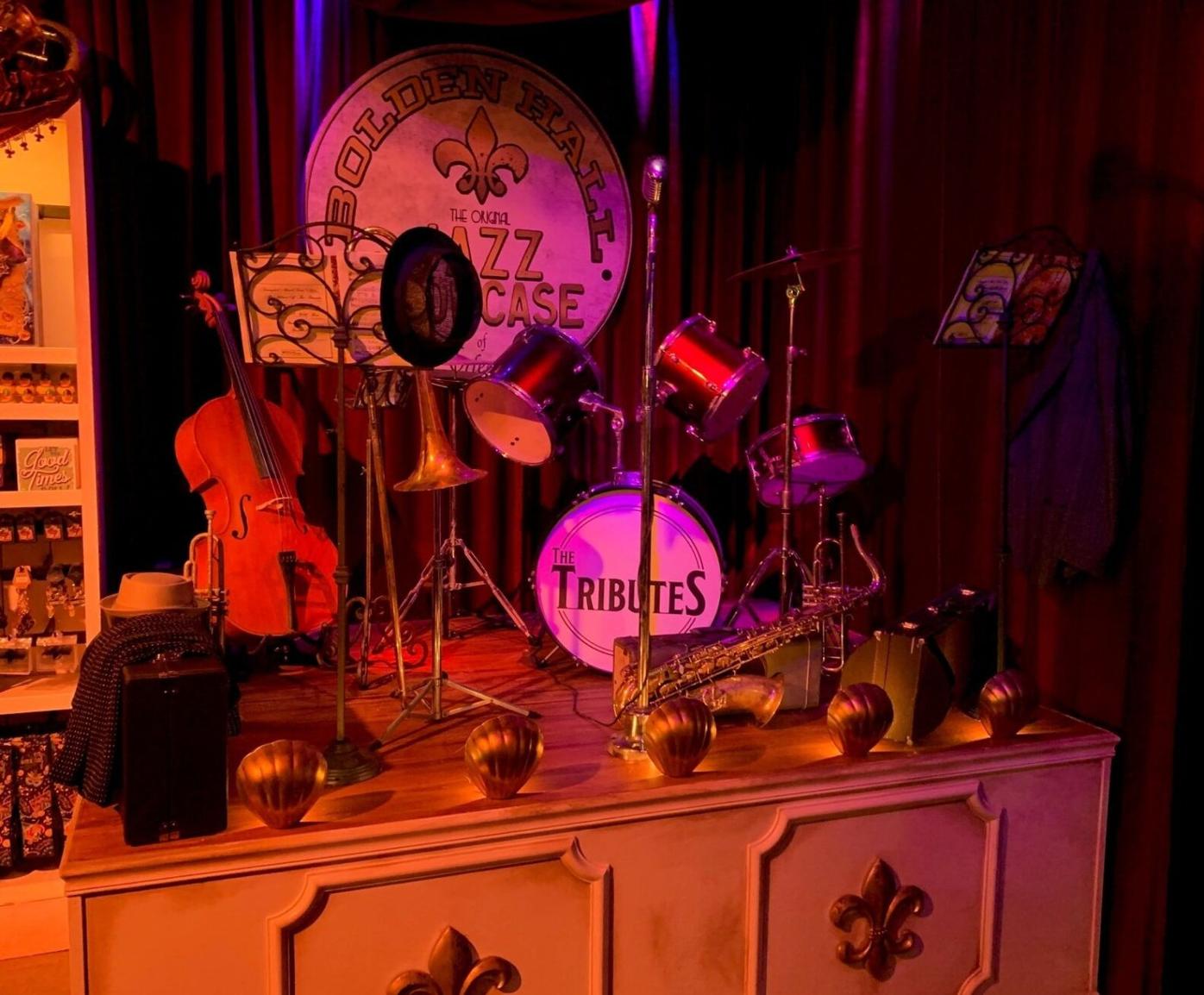 Musical instruments are arranged on a stage inside the jazz club area of the Tribute Store, a themed merchandise area at Universal Studios, during the theme park's Mardi Gras celebration. 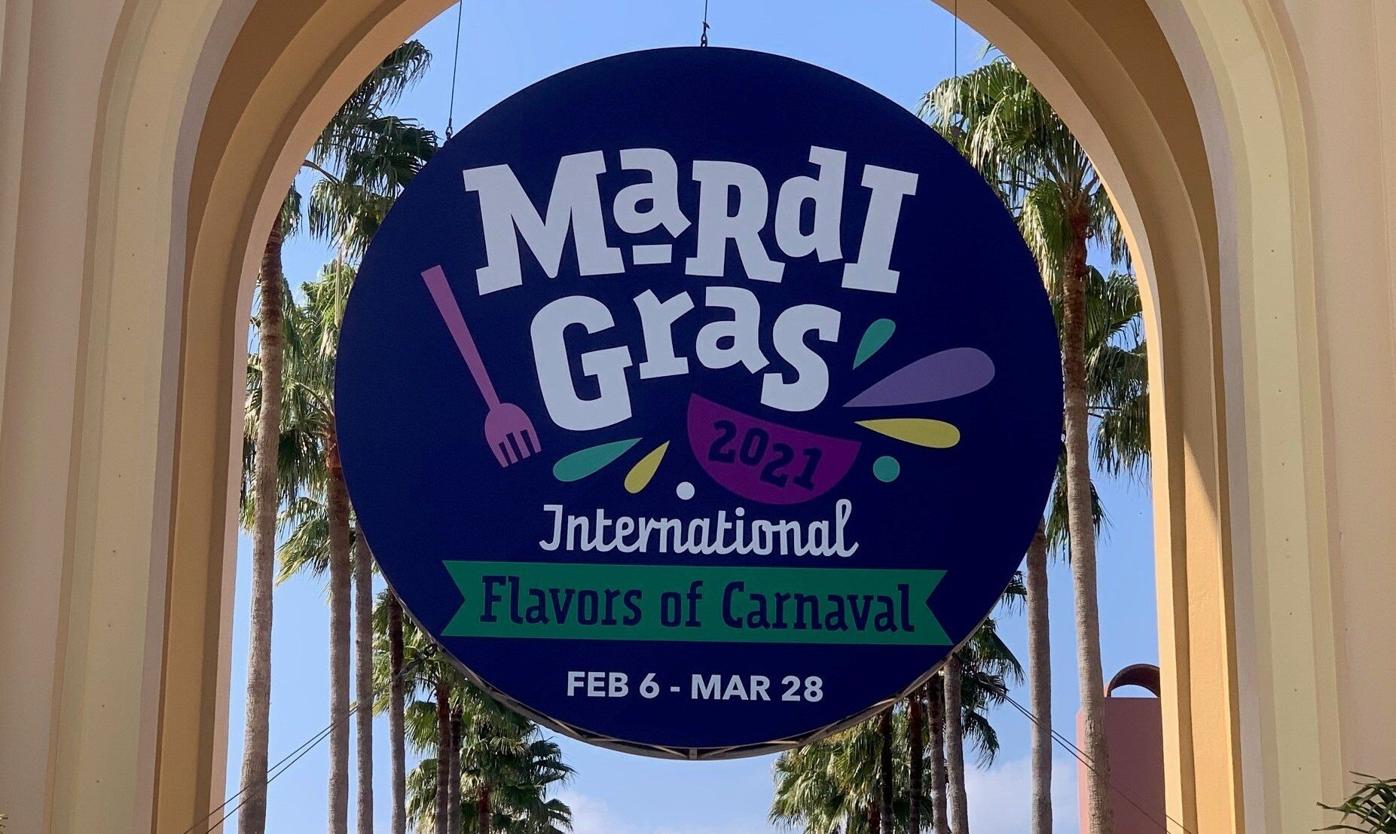 A medallion advertising the Mardi Gras celebration hangs at the entrance of Universal Studios theme park.

For its Mardi Gras celebration in 2021, Universal Studios is not having a parade. On the streets are a handful of pirate-themed models plus several of Universal’s traditional floats, including King Gator, who got a shiny, shiny facelift just last year.

Universal Studios visitors vie for beads tossed from a stationary float in the theme park's Music Plaza during the attraction's Mardi Gras celebration.

Musical instruments are arranged on a stage inside the jazz club area of the Tribute Store, a themed merchandise area at Universal Studios, during the theme park's Mardi Gras celebration.

ORLANDO — Mardi Gras has marched right back into Universal Studios theme park, but the celebration which continues through March 28, has been reconfigured.

Food has been given a bigger role (as event subtitle “International Flavors of Carnaval” hints), musical performances have been relocated and the parade has basically come to a standstill.

The coronavirus pandemic prompted changes and upended the usual concert series on the Music Plaza stage. But there are still beads to be hurled, and park visitors are eager to grab some midair. Here are other ingredients — some familiar, some a little funky — to take in during Universal’s Mardi Gras, 2021 style.

There are 13 food booths with international flair scattered across Universal Studios. Gone is the tightly congested setup bordering the park across from the Race Through New York Starring Jimmy Fallon attraction.

The arrangement feels pretty random. For instance, the Belgian offerings are over in Woody Woodpecker’s KidZone. German foods (and, yes, beer) are tucked along a boardwalk in the San Francisco area, on the water and facing Wizarding World of Harry Potter — Diagon Alley.

Pro tip: All Mardi Gras food locations are on the park app. Tap on Mardi Gras 2021, then in the upper right corner, tap on Map.

The “tasting menus” are there, too, as well as national facts about the celebration. (Carnaval has been celebrated for more than 700 years in Belgium, it reads.)

My sense is that there are more tables out in the open. Some of them are eye-catching and creatively themed (lizards painted on colorful barrels at Trinidad and Tobago; drums as table legs at Cuba).

FLOATS BUT NO PARADE

Parade floats that, well, just sit there may be counterintuitive, but there is entertainment on hand. These units don’t usually see the light of day, but visitors now can get a closer inspection of the detail work on the floats. On the streets are a handful of pirate-themed models plus several of Universal’s traditional floats, including King Gator, who got a shiny, shiny facelift just last year.

You can get close to the floats, but you can’t climb on board. It’s good enough for Instagram.

Performers are stationed on the floats, tossing beads to passers-by. During my visit, adults were acting more like grown-ups than in previous after-dark events, if you know what I mean, and kids were thrilled with the trinkets. There were also themed performers on stilts around.

The location of each float also is listed on the park app.

BEAT ON THE STREET

Music is a cog of Mardi Gras, and the absence of the concert series is a blow. However, even as I walked up to the entrance of the theme park, I could hear peppy, jazzy New Orleans-style tunes being piped in. That continued throughout the space.

However, it was occasionally interrupted by live music. A four-piece band wandered through the streets and took the stage (in a socially distant way) near Mel’s Drive-In; a larger ensemble played from the upper deck of the riverboat float near Music Plaza.

It felt, dare it to be said, sort of normal. Or at the very least, escapist. Park visitors were breaking into dance. (I did see one break-dancer.) Folks also grooved to the Beat Builders and its super-syncopated, synthesized version of “When the Saints Go Marching In.”

Surprising personal moment: I was there for two hours and didn’t hear “Feet, Don’t Fail Me Now,” which for years was an irritating earworm. In recent years, it has been less frequent in the rotation, usually played during the parade. Have I, too, fallen victim to the phenomenon of not appreciating something until it’s gone — also known as the Back to the Maelstrom syndrome?

Universal has again tricked out its Tribute Store, which has themed rooms and Mardi Gras merchandise, some of which isn’t branded with company logos.

It can’t be its intention, but the theming and details in this spot are so rich, there’s a danger of overlooking the for-sale merchandise. The signage outside indicates this is the Royal Street Jazz Preservation Hall, and inside there’s a jazz club, with musical instruments set up for a band called the Tributes in a corner (and many, many masks for sale). Then things get saltier with a graveyard and pirate moments (ropes, rum, etc.). It ends with food again, including giggling skulls and assorted “Sweet Treasures” and “Bayout Bites” for sale.

More expected goodies such as T-shirts continue with a pirate theme, and there’s an old-school T that’s a tribute to Mardi Gras events past, which includes a neon version of the old Universal Studios Florida logo.

Know before you go

Universal’s Mardi Gras celebration runs daily through March 28. Activities are included in regular admission; the eats are not. Food vendors open at 11 a.m.

Universal does not require reservations, although it is operating at a limited capacity. (That’s something else that can be checked on the park app.) Temperature screenings and face coverings are required.