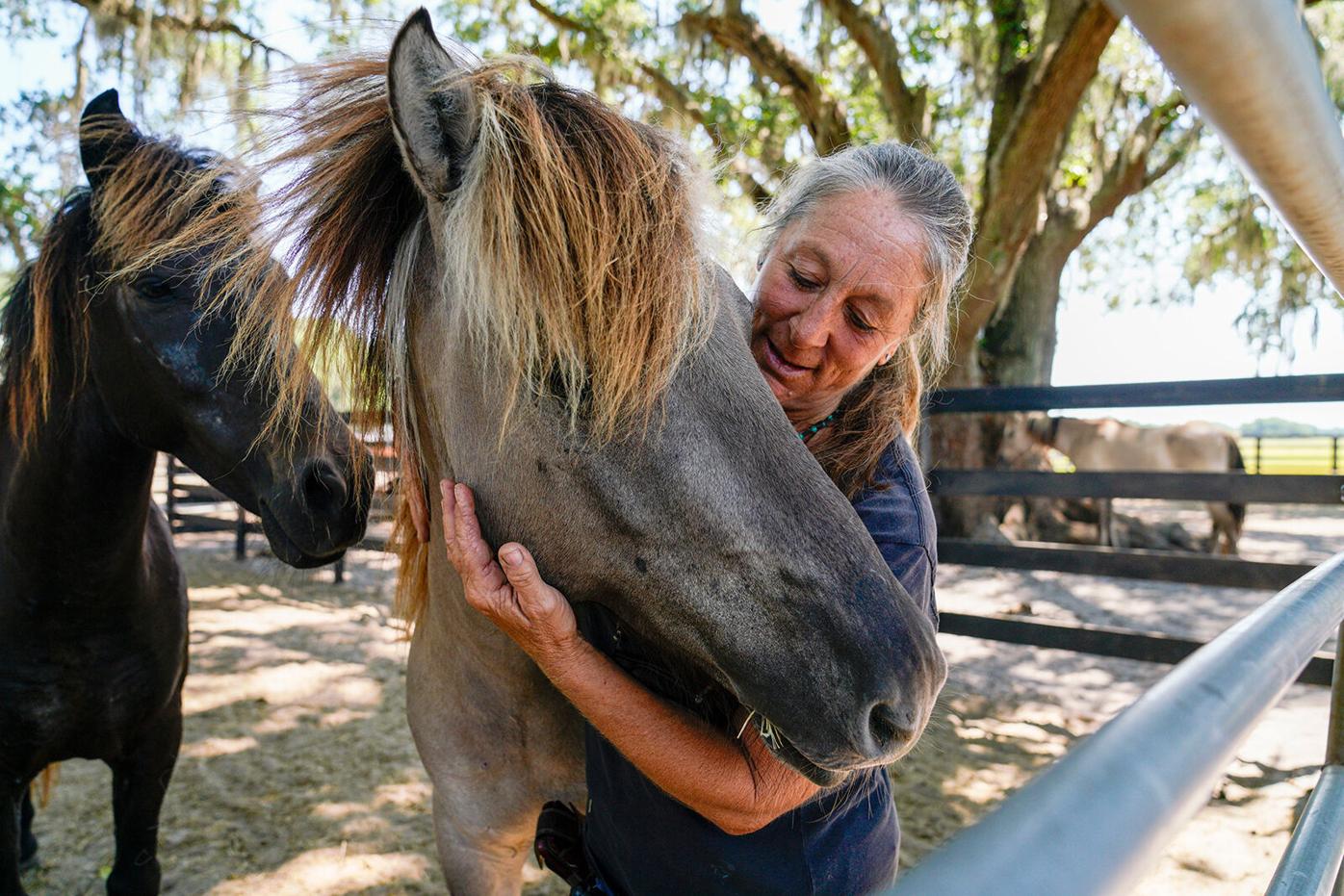 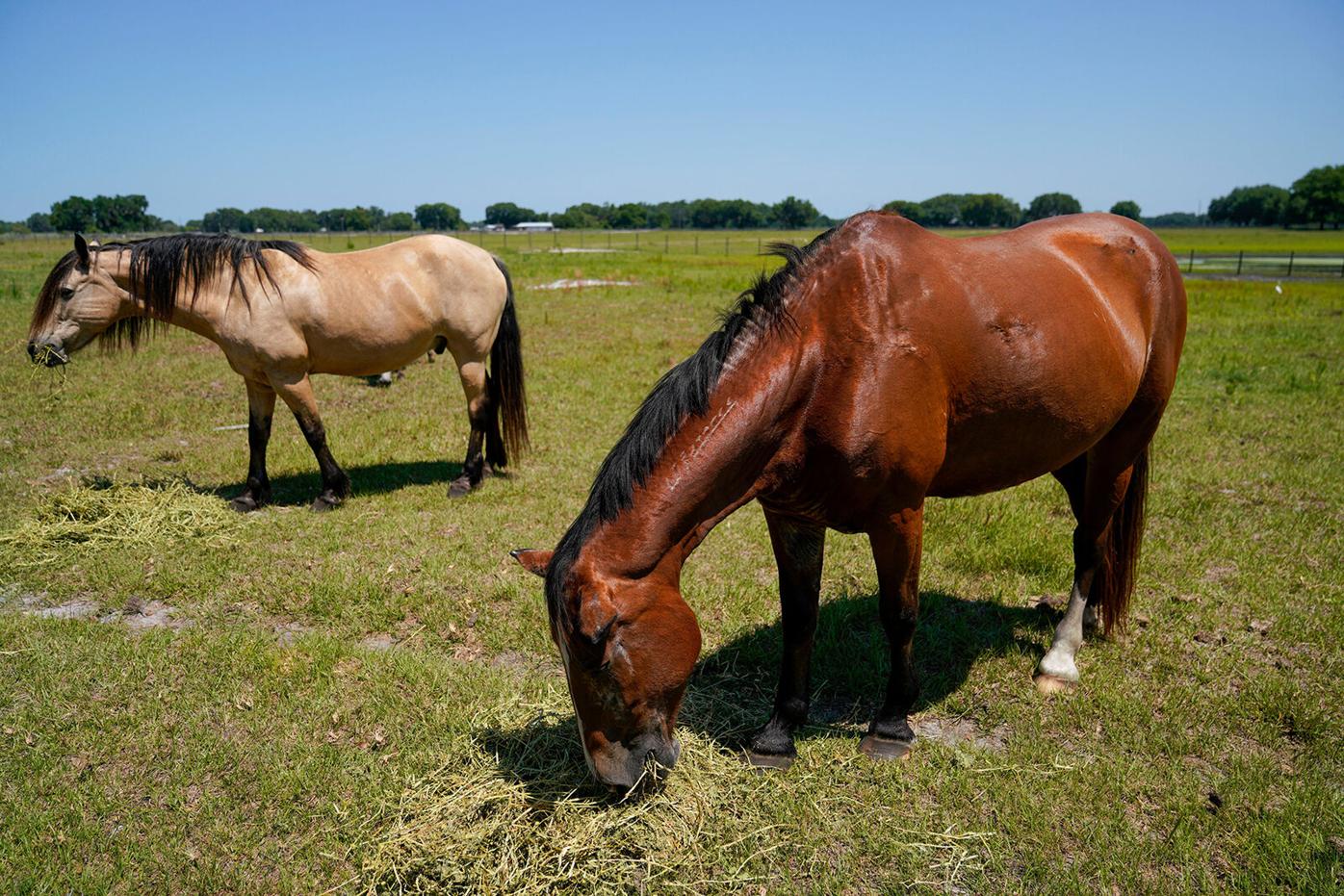 Tatanka, left, and Lady Gallant eat fresh hay in a field at the Wild Horse Rescue Center in Webster. 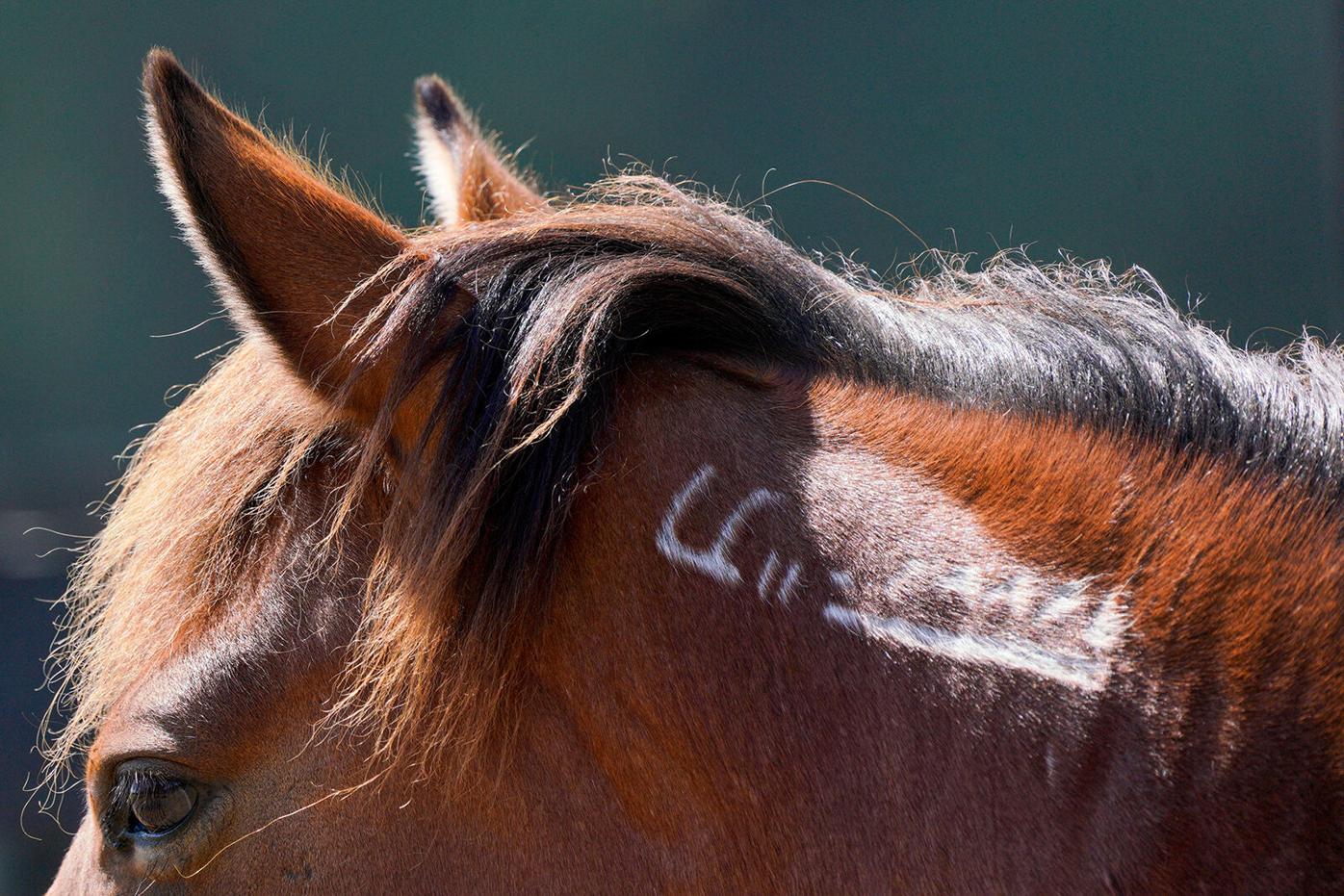 Okie, a 22-year-old male mustang, is pictured with the identifying freeze brand he received during roundup before he was brought to the Wild Horse Rescue Center in Webster. 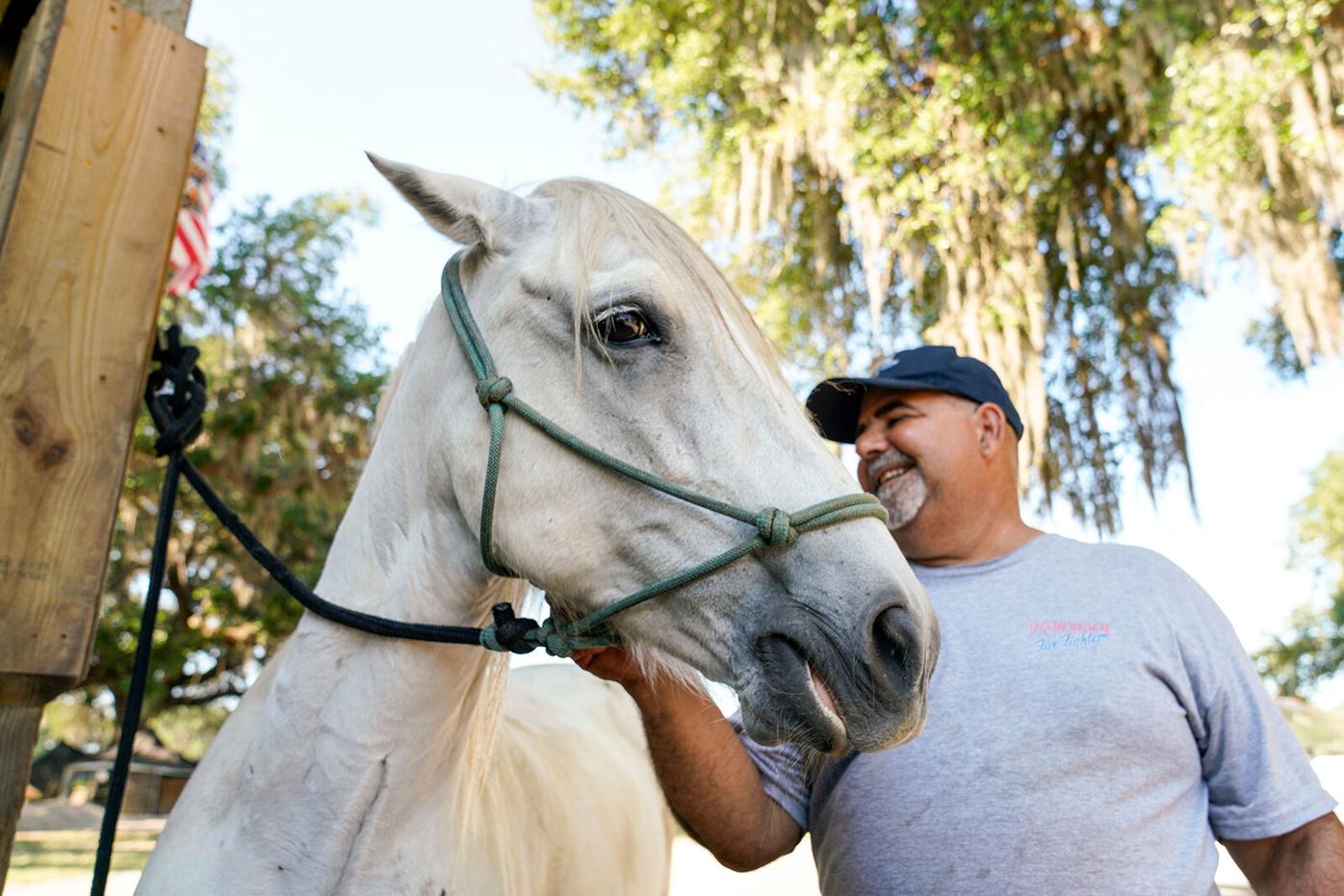 Jorge Pousa, 60, a volunteer from The Villages, cares for his project horse, a 9-year-old male Paso Fino named Pegasus, at the Wild Horse Rescue Center in Webster.

The white hieroglyphs running down the mustang’s big, brown neck, and the necks of all the horses like him, tell some of the story — if you can decipher the code.

The big “U” with the peculiar crossbars is easy. That’s for the U.S. government. The tiny equal sign with a flattened “V” beneath it translates to 0-7, the year of the 14-year-old horse’s birth.

The next two symbols are where it gets good. The flattened “V” and backward “L” denote 7-6, revealing that this horse was rounded up somewhere in Oregon.

Maybe it was Beaty’s Butte, or Murderer’s Creek or Riddle Mountain, or a dozen other herd management areas in the state, all the type of rugged, Western lands where we picture mustangs roaming free with windswept manes.

What you likely don’t picture when you think of wild horses are the mossy oak trees of flat, green Webster, Florida, where the Wild Horse Rescue Center is spread over 30-plus shady acres.

That is where Pinto the Oregon mustang arrived recently, skinny and frightened, after he was rescued from a “kill auction” in Louisiana.

Wild Horse Rescue Center founder and president Diane Delano has for several decades devoted her life to working with mustangs, the free-roaming horses managed and protected by the Bureau of Land Management as “living symbols of the historic and pioneer spirit of the West.”

Today, there are an estimated 70,000 wild mustangs in the West, spread across Arizona, California, Colorado, Idaho, Montana, Nevada, New Mexico, Oregon, Utah and Wyoming. That’s far more than the 27,000 horses the Bureau of Land Management believes the environment can sustain.

She started out by adopting untamed mustangs directly from the government, but eventually turned her focus to rescuing mustangs that were mistreated or headed for slaughter. She likes to say that the horses come to her center “for healing,” more than any training.

Every horse gets a new name, Delano said, “because that old name is your past.” That’s how Amigo became Pinto.

Last week, Delano, whose sedate, gray eyes are offset by the turquoise earrings that match the turquoise chain her glasses hang from, entered a corral where Pinto stood in the corner. She put her hand on the nervous horse’s neck, and when she backed away, Pinto followed.

“I did energy work on him yesterday, and I think he remembers,” she said. “We do cranial sacral massage therapy, acupuncture, energy work, Reiki. My horses get all of those holistic things.”

Horses that come in wild also get many months of traditional training. Some will learn to tolerate a saddle and become great for riding. Thor, who was rescued from the same auction as Pinto (and got the name because of his blond mane), might soon become a deputy if an upcoming visit from a South Florida sheriff’s office goes well.

Others, like Pinto, will eventually be gentle enough to make nice pets, but maybe not for riding.

There are more than 50 horses at the center in various phases of readiness to be adopted. Over the years, Delano said, she has trained and found homes for more than 1,000 of them. Horses that can’t be trained or adopted stay indefinitely.

But there are always more mustangs to take in, even though the money to do it is a little tougher to come by since the pandemic struck.

WHERE THEY COME FROM

Mustangs are the descendants of various breeds of horses that ran away or were abandoned over hundreds of years, starting with the horses introduced to the Americas by Spanish conquistadors in the 1400s.

After they came under federal protection in the 1970s, a once-dwindling wild horse population quickly multiplied. So quickly that the herds, which grow by about 20 percent a year if left unchecked, left the Bureau of Land Management scrambling.

Today, there are estimated to be about 70,000 wild mustangs in the West, spread across Arizona, California, Colorado, Idaho, Montana, Nevada, New Mexico, Oregon, Utah and Wyoming. That’s far more than the 27,000 horses the bureau believes the environment can sustain.

To manage the population, the bureau rounds up thousands of wild mustangs each year using helicopters, then makes those horses available for adoption.

But the value of a wild mustang as a symbol of freedom and beauty in the popular imagination — so iconic that an all-time iconic American automobile took its name — is at odds with the tangible value of an untamed, wild horse without a pedigree.

Training them into the kind of horses people want to own takes a lot of time and effort. First the mustangs were cheap to adopt, then the bureau began paying people $1,000 to adopt them.

Every rounded-up mustang is freeze-branded on its neck with a series of symbols, marking it as a mustang, which should protect it.

“But it doesn’t,” Delano said.

Another rescue organization paid more than $800 to buy Pinto from the auction before sending him to Florida.

Delano has thoughts on how the government could do a better job of managing the horse population, but mostly remains focused on saving as many mustangs as possible in a flawed system.

“We focus on the future for these horses,” she said. “And do it with a healing touch.”

The center was tranquil. Formerly wild mustangs Max, a gray 8-year-old from Muddy Gap, Wyoming, and Cortez, an 8-year-old dark bay rounded up in Nevada, nuzzled each other lovingly in one corral. Both are ready for adoption.

Hope, Faith and Promise, three once-emaciated mustangs whose rescue was chronicled in the Tampa Bay Times 13 years ago, munched on hay, looking healthy.

The pandemic derailed the Wild Horse Rescue Center’s international program. Normally, Delano hosts about a dozen paying guests from Europe at any given time, mostly younger people who want to travel and work with the horses for a few weeks to a few months.

Delano made up the lost revenue with loans, more than $100,000 of them, and has made up for the lack of people to help around the center with enthusiastic retiree volunteers from the Villages.

Debra Wyland brushed Ford, a 10-year resident at the center, in a barn. Ed Martin filled water troughs. Jorge Pousa rode Pegasus around a ring. All three showed up after seeing a brief article about the center in the Villages Daily Sun, and have kept coming back, for months.

Wyland had never been around horses in her life, except for the little horse statues she’d been briefly obsessed over as a child.

“When I was in kindergarten, I had a pair of red cowboy boots I wanted to wear every day,” Wyland said. Now, at 56, she’s finally learning to ride.

Pousa, 60, had spent a little time around horses as a teenager at a stable near his native Miami. Then came a long career in the Navy, where he worked in logistics.

“Now I’m retired and I can get my horse fix,” Pousa said. “I muck the stalls, and then I can play. It’s like therapy. The horses can read you as good as you can read them.”

Martin, 77, came from Boston. He was another “city person” who’d never been around horses. He was just bored at home.

The center is seeking volunteers to do basic work.

Visitors are welcome at the center, free of charge, though donations are accepted. The center has a weekly wine and painting night, and also offers riding lessons and trail rides. Call to inquire.