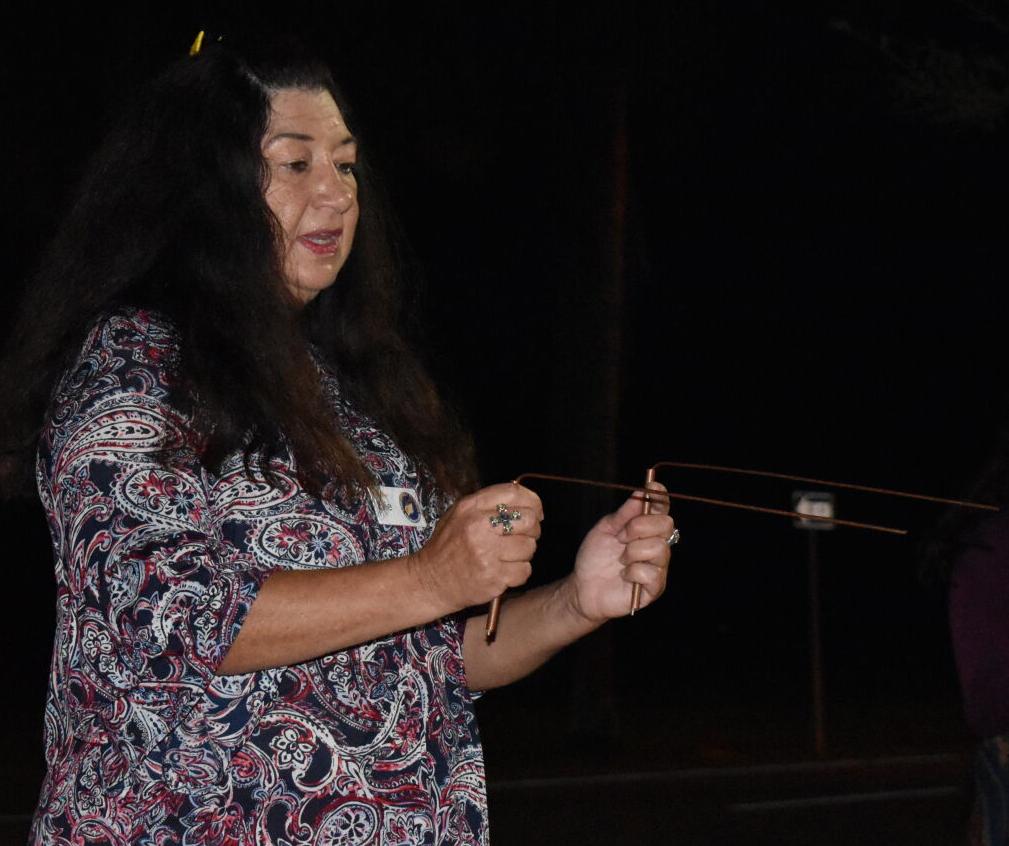 Evie Alexander demonstrates dowsing rods and how they can summon spirits. 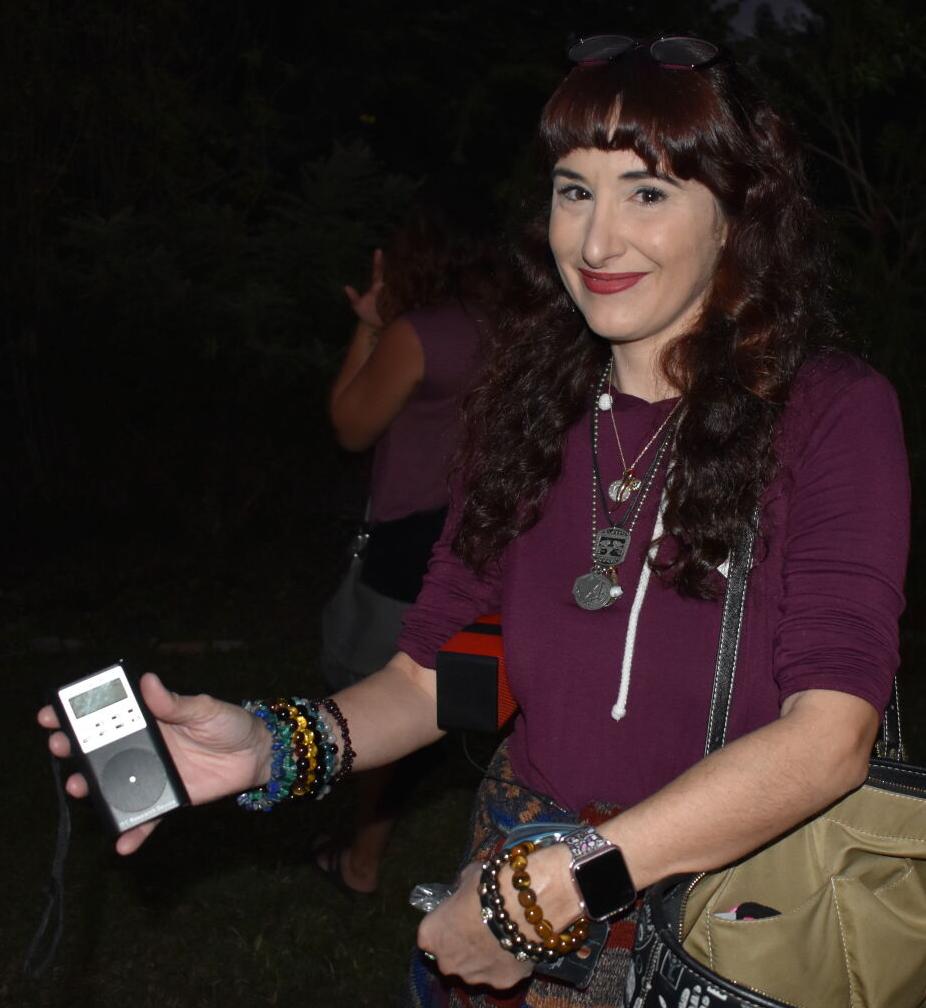 Paranormal investigator Gina Leslie, who is thinking of forming her own ghost tours, came along to share her experiences and demonstrate gadgets used on TV ghosthunter shows. She brought along her SB-7 Spirit Box and Digital Voice Recorder. 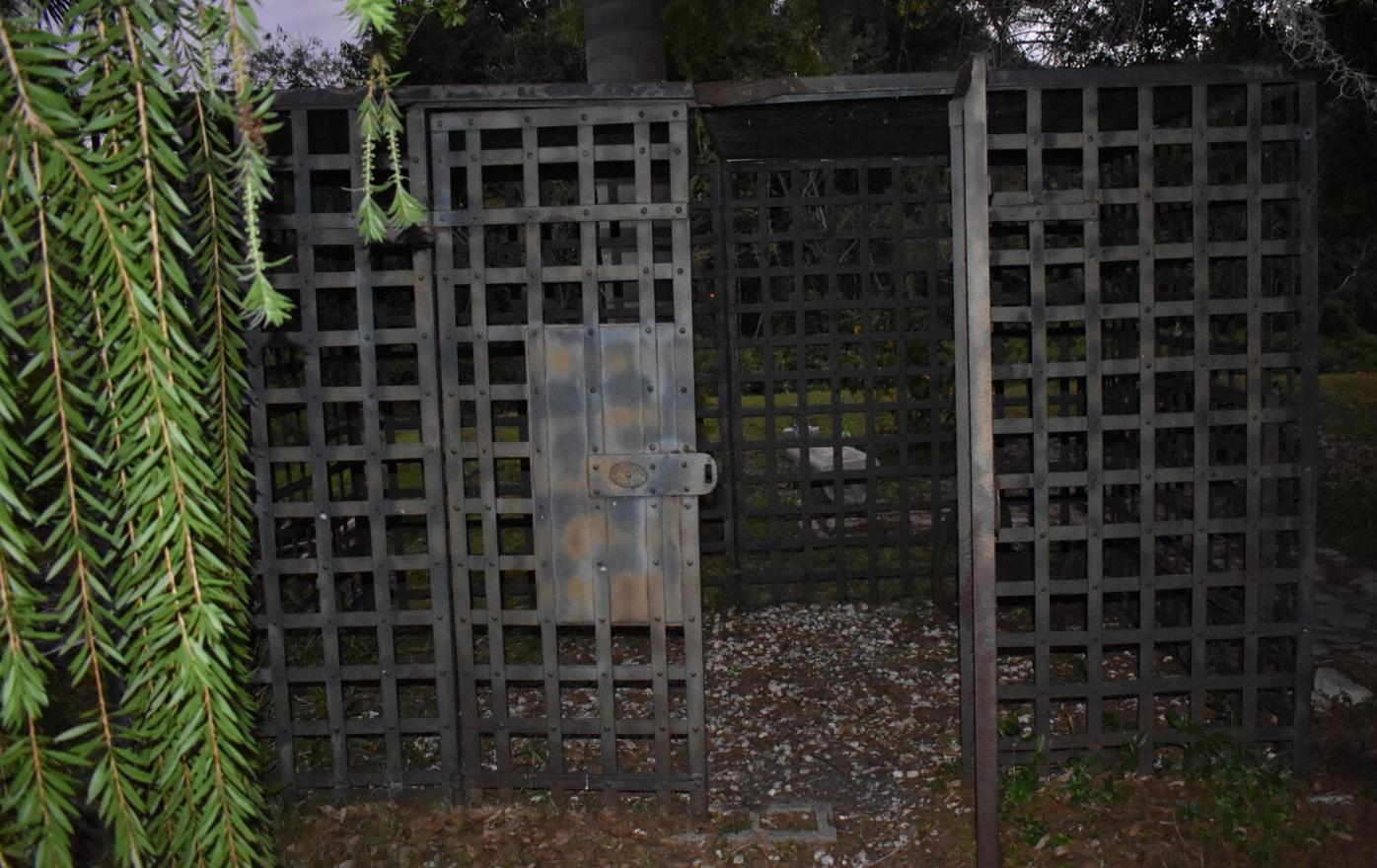 Evie Alexander demonstrates dowsing rods and how they can summon spirits.

Paranormal investigator Gina Leslie, who is thinking of forming her own ghost tours, came along to share her experiences and demonstrate gadgets used on TV ghosthunter shows. She brought along her SB-7 Spirit Box and Digital Voice Recorder.

If you’re a fan of ghosthunter TV shows, then Punta Gorda is the place to be.

But if you’re afraid of ghoulies, ghosties and things that go bump in the night ... you might want to stay away.

According to author Eve (Evie) Sylvie Alexander, a historical researcher who also leads walking tours, Punta Gorda has its share of paranormal activities.

In late February on a Friday evening, Alexander led a group of about a half-dozen visitors and locals to point out places where there has been paranormal activity — orbs, ghosts, sounds, and even objects being moved via poltergeists.

Joining the tour was paranormal investigator Gina Leslie, of Port Charlotte, who came equipped with a P-SB-17 device and a spirit box, which are used on ghosthunter shows, she said.

At the first stop, the old Punta Gorda library on Henry Street, Alexander told the group, “Three times a light was on inside.” It would come on and off randomly, even though the building has been vacant since the new library was built on Shreve Street.

She said loud sounds have been heard from within, and when someone took a photo of the building from outside, there was “an orb in the iPhone photo.” When it was still in service, books would mysteriously fall off shelves. This would be some time around 2016 to 2019.

Alexander said some thought it was the spirit of librarian Mary Knowlton who came to Punta Gorda after retirement and volunteered for Friends of the Library. She was accidentally shot and killed during a police training demonstration for private citizens in 2016. A section of the new library is named after her.

Another paranormal event occurred on Shreve Street at the E’Lan Salon and Spa, which “used to be a bank,” said Alexander. Workers in the salon were finding bottles on the floor in the morning, and they installed a camera to monitor at night.

“The camera showed the bottles on the shelves, then it went black, and when it came back on, the bottles were on the floor,” she said.

“One time a manager was watching by camera as a newer employee closed up the salon for the first time. She saw a purple orb rise from the floor and ascend to the ceiling,” said Alexander.

At the History Park on Shreve Street, she talked about local resident Gussie Baker’s encounter with the paranormal. In her book “Ghost Stories of Punta Gorda,” Baker is called “Penny.”

Buildings in the History Park are decorated for Christmas. One year, Baker brought in her collection of glass Santas to be displayed at the former Gilchrist Bed and Breakfast, now known as the Price house.

Architect Maxwell Price joined two cottages together in 1914 to form the house as it appears today. At one time, the two units were rented out as apartments.

Baker would open the door in the morning, then lock it at night. No one else entered before her or left after she locked the door.

Each morning, she found her Santas lying face down. This went on for several days. Finally, Baker yelled out, then left. The next morning, she opened the door to see all the Santas smashed on the floor.

After the tour, Baker was contacted at her home to confirm the story. It was even more eerie than what Alexander related.

“I had a little section above the cabinets,” she told The Daily Sun. Baker said she had to climb a ladder to stand the Santas up for the display.

As Alexander told the tour group, Baker would lock up for the night, then in the morning reopen and she’d find the Santas lying face down.

One evening when she was about to lock the house, she said, “Santas, I am so sick of climbing up a ladder ... stay still for tonight,” Baker remembered.

The next morning, the Santas were smashed, Baker confirmed. But the plot thickens.

Baker hired paranormal investigators from North Port, she said, after another disturbing incident. A volunteer said she had a “hard time getting out” from a certain place in a corner of the house.

She went over to where the volunteer pointed out, and stood there. Baker, too, couldn’t move. “It was like I was glued to the floor; I couldn’t move and it took 20 minutes to get out.”

The paranormal investigators stayed the night and reported they heard voices of people talking, but no one could be seen.

Baker then contacted people who rented apartments in the house before it was moved to the History Park. She learned a box of bones was found in the attic. They were taken to a local attorney who sent the bones to the University of Florida.

They were Calusa Indian bones. When Price’s house was under construction and workmen were digging, they came across “arms, leg and a head,” said Baker. The house’s original location was built over a Calusa mound.

The old jail cell is now on display at the History Park. Paranormal investigator Gina Leslie used her recording device inside the cell earlier, then replayed it. A human voice could be heard.

Later, Alexander led the group to a place to rest for a “hands-on spirit communication activity.” She handed out dowsing rods and encouraged the group to talk to spirits. At least one member’s rods were spinning wildly, while a young girl’s rods stood still. Alexander surmised it was because the girl hadn’t suffered any losses and therefore no spirits were trying to communicate with her.

The sandy beach at TT’s Tiki Bar, where an apparition thought to be the spirit of celebrated millionaire yachtsman — Commodore Caldwell Colt — is said to roam. He died a mysterious death and often stayed at the old Hotel Punta Gorda, which encompassed land extending from the empty lot at U.S. 41 and Marion Avenue, north to the Peace River and Four Points Sheraton property.

The spirit of Bertha (Bertie) Thalheimer was active via orbs moving up and down, at the site of the new library on Shreve Street before it was built. The old stone wall of her home still remains. Thalheimer was said to have had a painful condition and would be up all night walking, and the orbs mimicked her movements.

Currently, people in the dog park — Hounds on Henry — behind the library, have reported their dogs behaving strangely around 6:53 a.m. — the exact time thought to have been when Thalheimer died. The dogs would suddenly stop playing, prick their ears and cock their heads, as if they heard something humans can’t.

From 1913 to the latest reported incident at Laishley Park in 2016, the ghost of four-term city marshal John Harry Bowman appeared to help citizens in distress. He was shot in the head and died instantly in 1903, but apparently he was still on the job.

After providing assistance, such as helping a motorist and bringing a lost girl at Laishley Park in 2016 to her mother, he would disappear. He was described as wearing a knee-length black coat with brass buttons over a white shirt with red bow tie. He wore a large star badge, metal helmet, and identified himself as the “city marshal.”

For more stories and information, go to Alexander’s website at swfloridawalkingtours.com.

Thank you, Nancy, for the article! You were a fun guest and we enjoyed hosting you on the tour!

Correction: Dousing rods do not "summon spirits"; they are used to communicate. There was a comment attributed to me about the little girl's rods which didn't move. That wasn't me who said it. Perhaps Gina?

Regarding the former Gilchrist Bed & Breakfast, I believe it has been wrongly attributed to Max Charles (not Maxwell) Price. Census report evidence indicates it was his cousin Mary Jackson Price who owned the property and reconfigured the two houses into one u-shaped building. However, the last owners, Johnny and Betty Surles, also performed significant upgrades including expanding the kitchen and adding private outdoor access doors to all the rooms when they converted it into a B & B.

Gina Leslie who was prominently featured in this article was a guest on the tour. She jumped in to help when our usual assistant tour guides were waylaid with a pet emergency.

Ghost Stories of Punta Gorda is a 1 & 1/2 hour tour, right around sunset. Enjoy a leisurely walk of a little over a mile with seven stops for story telling. You’ll be introduced to two local parks brimming with Victorian history. Friday nights from 6 – 7:30 PM.