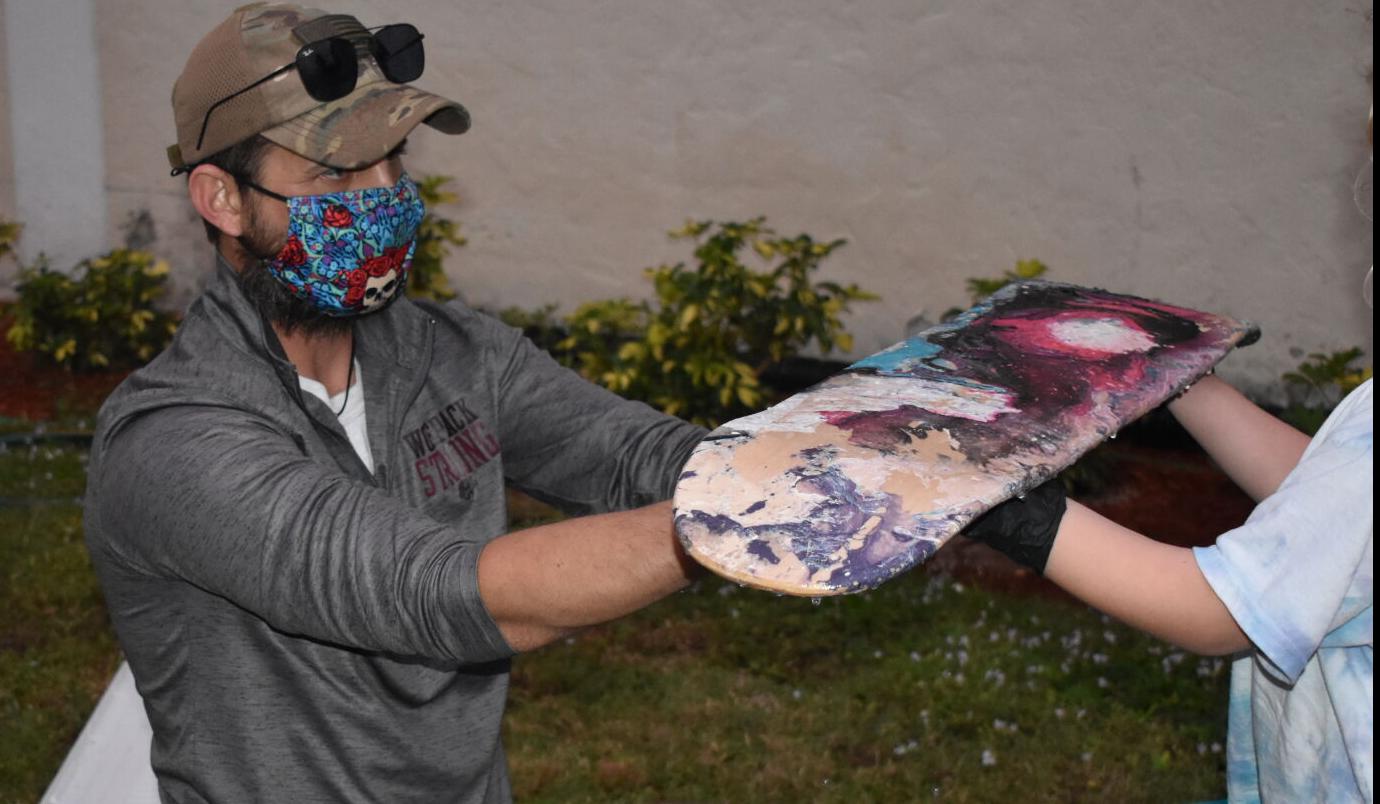 Mike Bernicchi hands the finished product — the deck board for either a skateboard or wall art — to its creator. 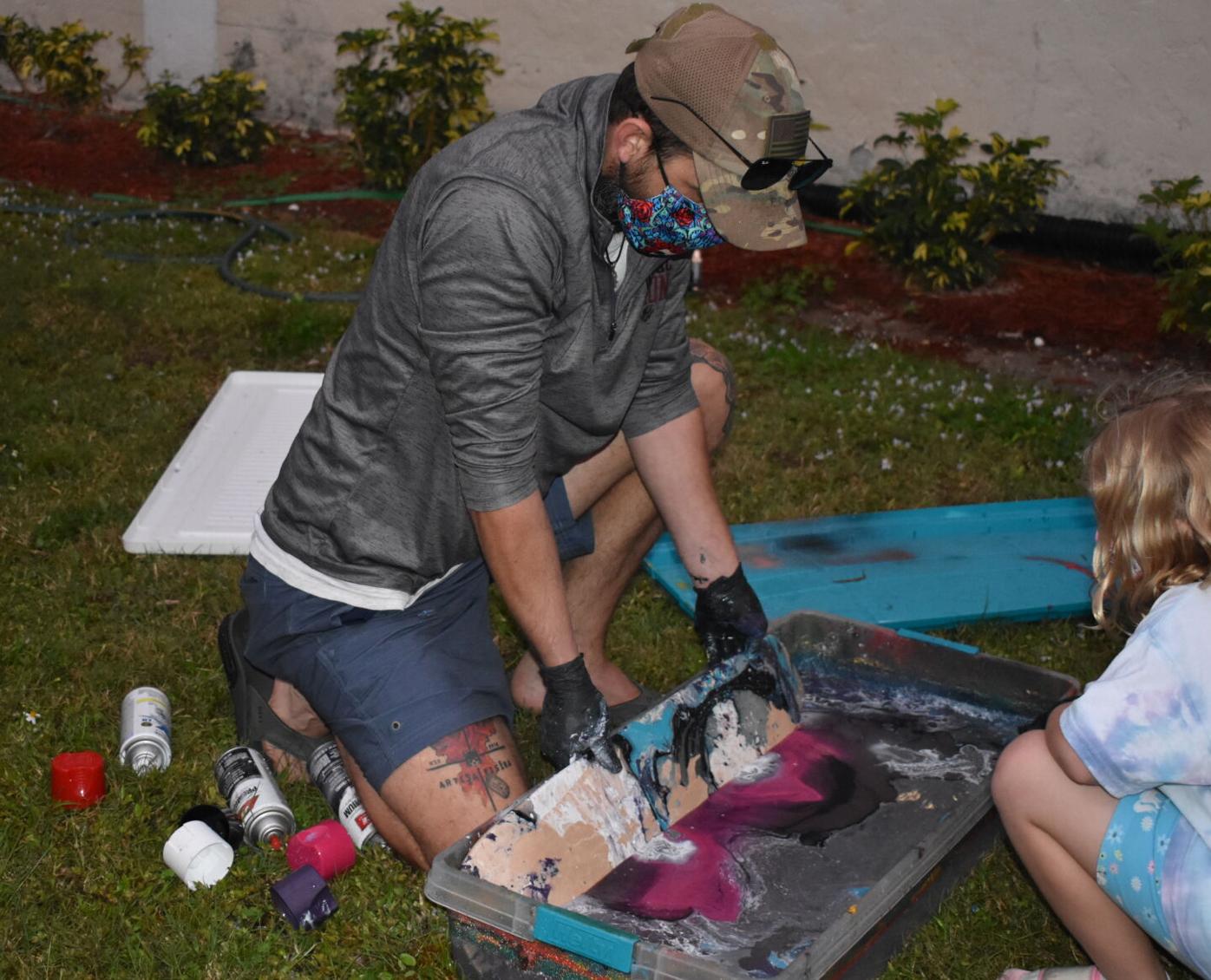 Mike Bernicchi, a teacher at The Academy and volunteer for Valerie’s House, helps a child create an artistic pattern on a deck board. 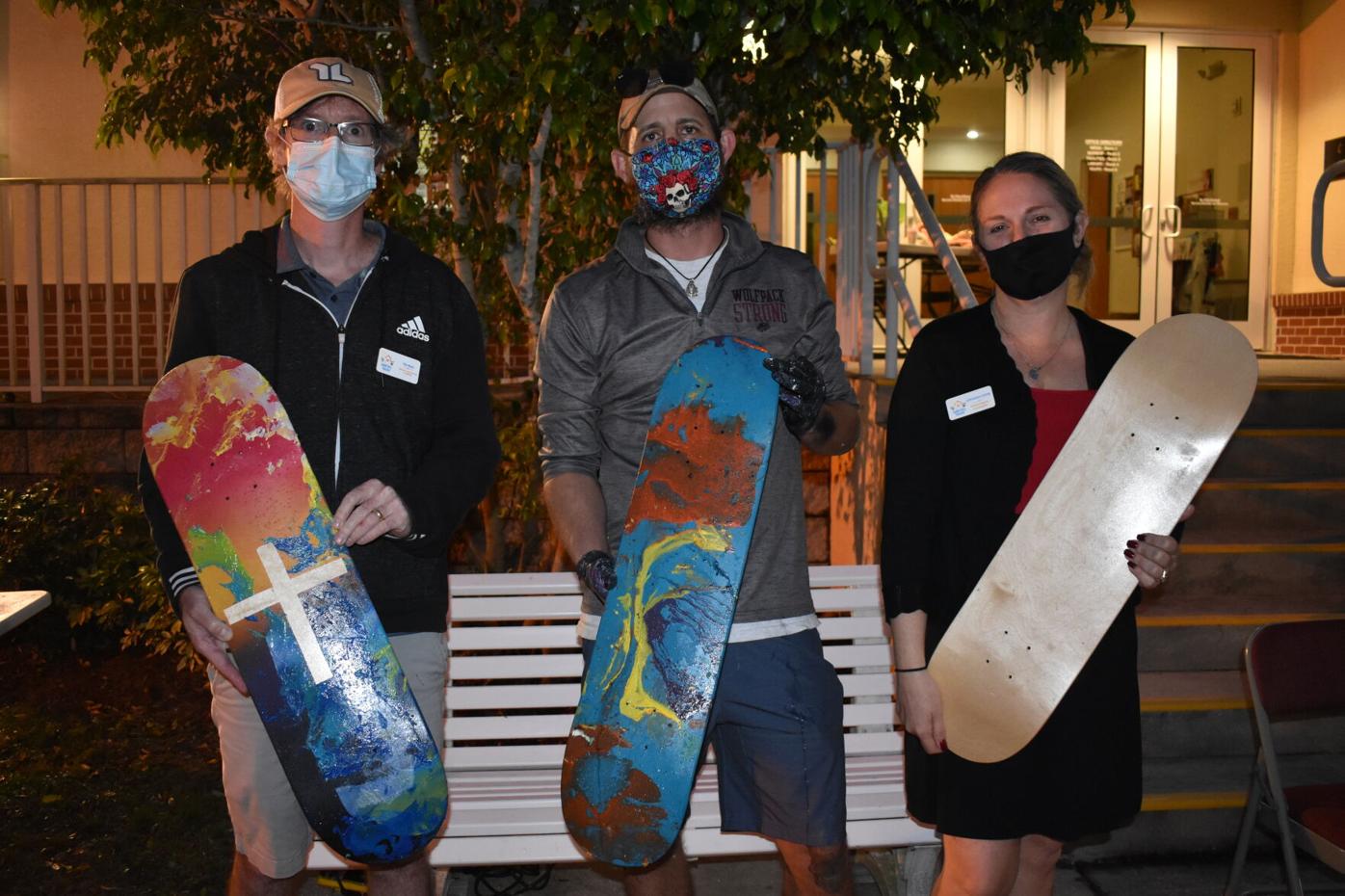 Mike Bernicchi hands the finished product — the deck board for either a skateboard or wall art — to its creator.

Mike Bernicchi, a teacher at The Academy and volunteer for Valerie’s House, helps a child create an artistic pattern on a deck board.

About a dozen children grieving the loss of a parent, sibling or guardian got the chance to smile again last Friday, when Punta Gorda-based Valerie’s House held a fun evening on the grounds of the First United Methodist Church on West Marion Avenue.

There, the children, who were accompanied by their guardians, got to learn the art of hydro-dipping and participate in designing a deck board to be turned into a skateboard or used as wall art.

Until Valerie’s House finds a permanent home or rental in the area, the church has opened its doors for the children to meet and socialize. Should they need to vent, counselors and facilitators are on hand to help them with their emotional needs.

But only laughter, giggles and excitement were evident Friday as the children interacted with each other and patiently awaited their turn to create a uniquely designed board.

Punta Gorda’s Valerie’s House coordinator Christine Carey was on hand, as were Tim Buck, director of Youth Ministry at the church, and local teacher and veteran Mike Bernicchi, who donated supplies and demonstrated the hydro-dipping technique.

The Punta Gorda Valerie’s House is the third one in Florida, founded by former TV reporter Angela Melvin, who told The Daily Sun how it all started.

When she was 10 in the summer of 1987, Melvin and her 8-year-old sister were waiting for their mother to pick them up from summer camp. But their mom never arrived; she was killed in a car accident on her way to get her children.

“Because she died in the summer, by the time we went back to school, we kept it inside; we didn’t want to be different.” Melvin said, “We grieved alone and got through it.”

Fast forward to 2016, when different encounters with others who have lost loved ones, led Melvin to found Valerie’s House in her hometown of Fort Myers. The rented home there provides a haven, of sorts, and its message is, “Where children learn loss doesn’t have to limit their dreams,” she said.

Next, Melvin founded a Valerie’s House in Naples. Between the three, they help more than 1,000 children, she said.

Members of Valerie’s House are grouped according to age — elementary school children, middle schoolers, and teens. They meet twice a month and before COVID-19, their gathering would begin with a dinner. Now, Valerie’s House facilitators — licensed counselors and volunteers — all wear masks along with the children, and social distancing is practiced.

Valerie’s House allows children to talk, participate in activities such as arts and crafts, and if they feel the need to talk about their loss, adults and their peers are there to provide a support system of love and understanding.

Melvin said children who suffer loss can go in one of two directions. Some become more driven in an attempt to become extremely successful and to “achieve for them (lost loved ones),” Melvin explained. Others go in an opposite direction. They turn to drugs or alcohol to deal with their loss.

Melvin chose the path of over-achievement. A fourth-generation Floridian, she graduated from Cypress Lake High School, then the University of Florida, where she received a journalism degree. After working for a decade in broadcasting, she left the media and segued into counseling, as she saw the need to help children who had gone through what she had, she explained.

And the need is great. “One third of the U.S. (population) has dealt with loss as children,” and “one in 11 children will lose a parent before the age of 18, in Florida,” Melvin said.

Valerie’s House helps grieving children learn they can move on. She said, “the best way to work with children grieving is to listen and tell them, you’re not alone — you have friends.”

Christine Carey was a teacher for about two decades. Now retired, she got involved because of an incident that happened in her kindergarten classroom.

“I got a call from a parent who said, ‘One of your students was killed in a car wreck tonight’ and “I dropped to my knees; they are my babies,” she remembered thinking. Carey soon found herself “working with 17 grieving students and the parents of the boy.”

After learning about Valerie’s House on social media, “I just burst into tears,” she said. “I knew that was where that (deceased) child wanted me to be.”

Carey said Valerie’s House “lets the children lead” in discussions and activities; it allows them to have fun, as children should.

Mike Bernicchi, who teaches at The Academy, once demonstrated hydro-dipping to fellow veterans involved in a charity he founded. He closed the charity because he had too many obligations, he said, but he ramped up his involvement in Valerie’s House.

He had left-over skateboard decks he used for the veterans’ project, so he brought them out for Valerie’s House. “I love what they do; it’s a great organization,” he said.

Some dozen or so children and their guardians watched as Bernicchi and Tim Buck hydro-dipped the first boards. They spray-painted water held in rectangular tubs. Then, the boards were slowly submerged below the paint, then raised to capture “swirly,” abstract patterns.

The children could either attach wheels and other gear to make skateboards, or hang them in their room as wall art, Bernicchi explained.

A 20-year veteran of the National Guard, Bernicchi said he got involved with Valerie’s House after a friend of his joined the board of directors for the organization.

By the look on half of Bernicchi’s face (all wore masks, even though the event was held outdoors), it was apparent he was enjoying teaching the children as much as they were having fun with a newly-discovered art project.

And art it was — the children could choose their own colors, and some decided to spray and dip the boards themselves. The younger children allowed Bernicchi to help them, but the enthusiasm was no less.

Carey asked an adult whether the gathering looked like a group of grieving children, and the answer was a resounding “no.” The giggles, excitement and shear joy was evident this day, which gave children a respite from sadness.