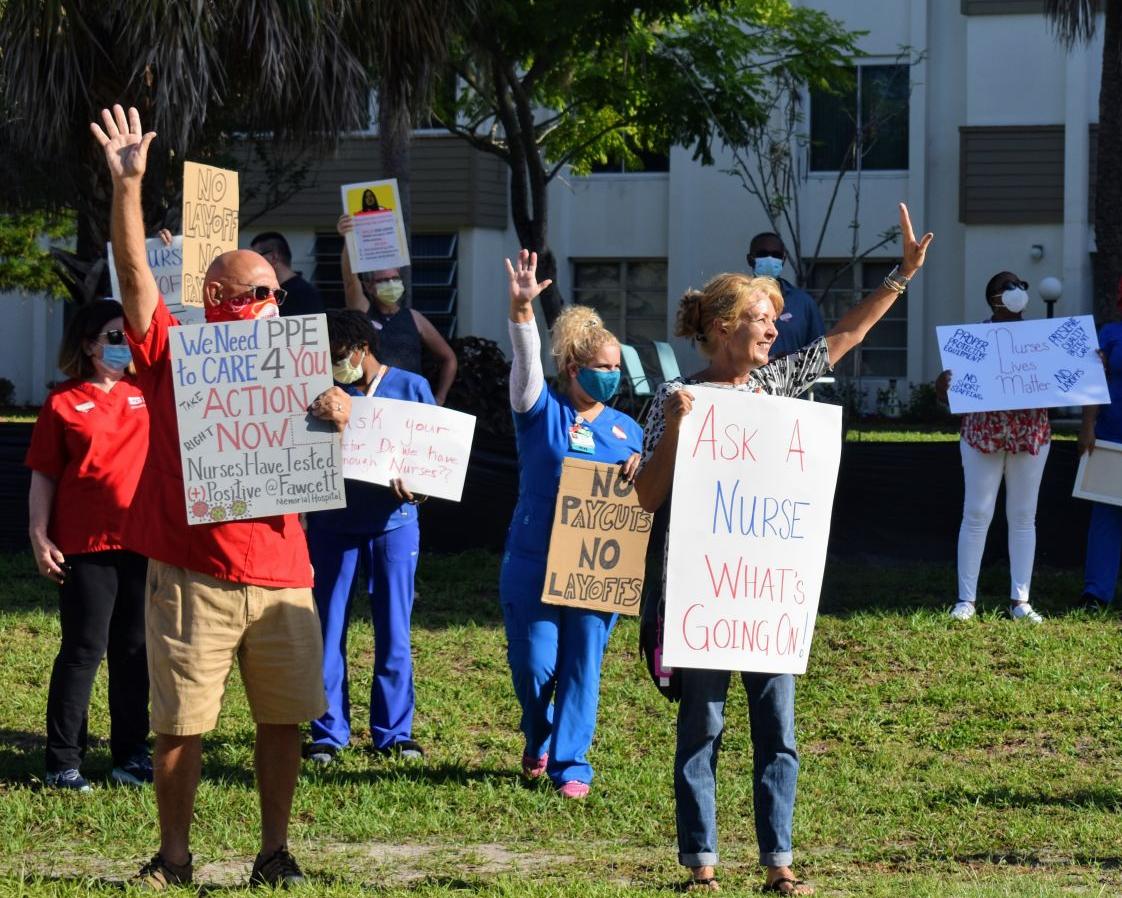 Many passing cars honked in support of the nurses Friday morning protesting lack of personal protective equipment and threats of layoffs at Fawcett Memorial Hospital in Port Charlotte. 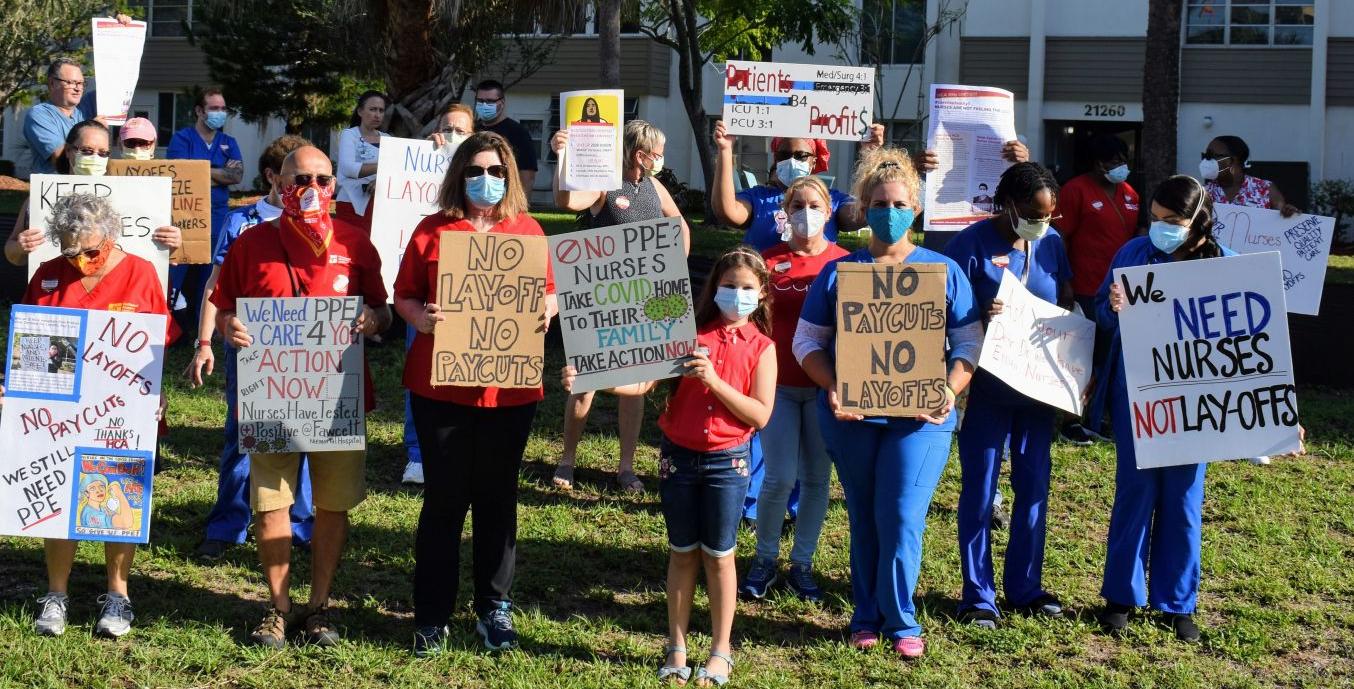 More than 30 nurses protested near Fawcett Memorial Hospital Friday morning against the threat of layoffs.

Many passing cars honked in support of the nurses Friday morning protesting lack of personal protective equipment and threats of layoffs at Fawcett Memorial Hospital in Port Charlotte.

More than 30 nurses protested near Fawcett Memorial Hospital Friday morning against the threat of layoffs.

The protest was organized by National Nurses United, a union that represents a majority of the 320 nurses at the Port Charlotte hospital. Fawcett, and and Doctors Hospital of Sarasota were among the 15 HCA-owned hospitals this week where nurses protested. Englewood Community Hospital is also an HCA hospital.

"HCA demands include a unilateral, undetermined number of layoffs, wage freezes, and other cuts," the union said in a press release Tuesday. In some facilities, "hospital executives are also threatening unilateral cuts in nurses’ hours and 'reassignment,' which equates to reductions in patient care."

"We don't have enough staff as it is," said June Phillips, a registered nurse at Fawcett's Spine/Ortho Unit and the chief nurse representative for the union.

"They want to cut staff 10% when we need to increase it by 20%," said Gary Mousseau, a registered nurse for the endoscopy unit at Fawcett Memorial Hospital. "No one is listening to the nurses."

In April, the nurses protested the lack of personal protective equipment, having to reuse single-use masks, and short staffing at the hospital. According to Mousseau, over 40 Fawcett nurses were in quarantine as of Friday.

"(HCA is) just protecting their investors," said Angel Bahr, a registered nurse at Fawcett who has worked in some COVID-19 units. "It's not because they're broke, it's because they want to save on costs."

The company received approximately $900 million from CARES Act funds in April, according to the company's quarterly report.

HCA also received $4.3 billion in accelerated Medicare payments that same month, which will be required to be paid back or recouped by the Centers for Medicare and Medicaid Services, or CMS, according to the report.

Nurses have to wear the same mask throughout their shift, Bahr said, and are being overwhelmed with a large patient-to-nurse ratio. "I have no charge nurse, no CNAs, no resources. I can handle it on my own to an extent," she said. "I am tired of coming to work in tears."

While the company is allegedly refusing to match 401ks and to give nurses the raises agreed upon in their union contracts, and threatening to layoff 10% of the staff, nurses and other front-line workers are being given candy for encouragement, Bahr said.

"At a time when hospitals across the country are struggling to survive and many are resorting to furloughs and layoffs, it is surprising and frankly disappointing that unions would demand pay raises for their members and may reject the continuation of a generous pay program that is providing continued paychecks for more the 100,000 colleagues," said Fawcett spokesperson Alexandria Benjamin in a statement Wednesday.

HCA Healthcare, like many hospitals across the country, is grappling with reduced patient volume in certain areas like elective procedures, seeing only a third of the patients they saw this time last year, according to the company's quarterly report.

Earlier this month, HCA announced that it had reduced discretionary spending, applied salary cuts to senior level and corporate employees, according to HCA CEO Sam Hazen in a letter dated May 12.

Benjamin continued: "We are maintaining our focus on keeping as many of our colleagues employed as we can, despite the lower volumes ... While the union appears to be focused on pay raises for some, our priority is on all our colleagues and their families."

HCA Healthcare has not laid off or furloughed any employee because of the pandemic, Hazen said earlier this month.

"We still hope to avoid layoffs but may not be able to," Benjamin said. "Neither Fawcett Memorial Hospital or HCA are planning to do layoffs or furloughs."

HCA started a special pandemic pay program that pays 70% of base pay for employees who have seen reduced hours. According to Benjamin, the program has helped more than 16,000 union members "even though it is not part of their contract."

"The goal of HCA Healthcare’s pandemic pay program is to keep our caregivers employed and receiving paychecks at a time when hospitals throughout the country are experiencing significant declines in patient volume and there is not enough work for them," Benjamin said.

However, Phillips said the pandemic pay program is "almost nonexistent," and only knows of a few people getting "a few dollars."

With all these stressors, such as the short staffing and lack of PPE, Phillips said it's "ultimately the patient is the one who suffers."

What have other area hospitals had to do?

Other area hospitals have had to resort to furloughs, with Sarasota Memorial Hospital having to furlough 9% of its staff, or 631 employees, during the pandemic, according to spokesperson Kim Savage. The hospital did give these employees extra paid time off to help with the temporary leave and continues to pay their benefits. As of Thursday, the hospital has brought back more than half of the temporarily furloughed employees.

Venice Regional Hospital has also had to furlough a few staff members, with most returning to their positions as elective surgeries and procedures were starting up again, according to spokesperson Julie Beatty.

DeSoto Memorial Hospital had not had to lay off employees, but did have to reduce hours to adjust to the smaller patient volume, according to spokesperson Sarah Hipp.

Thankyou for your coverage of these very important issues. We truly want to be able to keep providing our patients the safest, most competent care with the personal touch of making them feel we empathize with them. When the bottom line comes down to cutting cost through staffing, care will be compromised for numerous reasons. We all hope someone in our corporate office comes to a decision on how to save money elsewhere. Fawcett is a solid hospital with superior caregivers, many of which who are certified in their specialty areas and are true experts. Please keep Fawcett the amazing hospital it is and don’t punish the frontline workers by cutting our benefits, laying us off, or denying us our small yearly July raise that is already signed into our union contract. There has to be a better solution. #lovefawcett #lovemyamazingskilledcoworkers