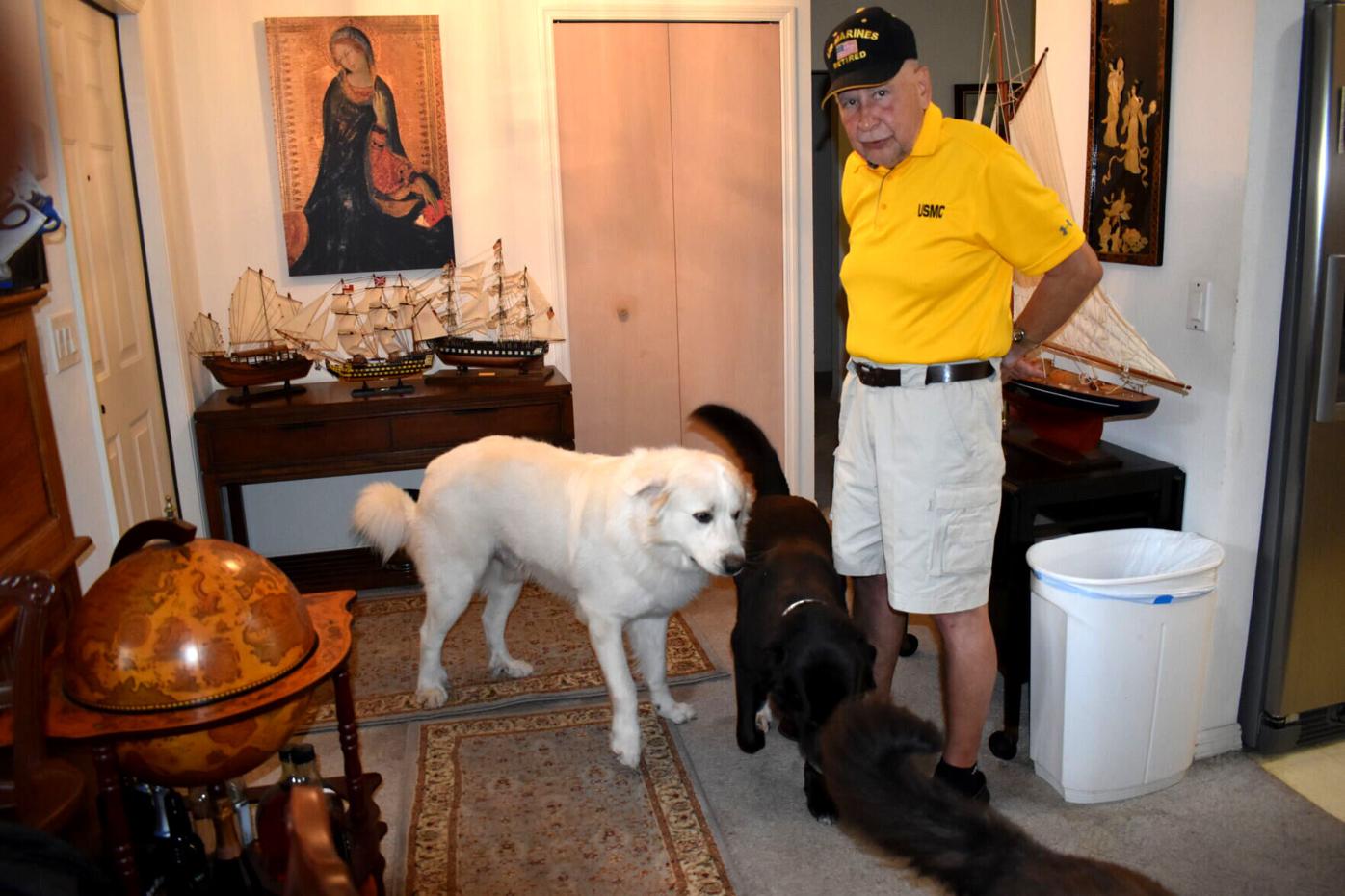 Dan Bonenberger with Max, the Great Pyrenees, and one of the two black lab mixes he rescued.

Dan Bonenberger has an extensive collection of U.S. Marine figures from the Revolutionary War to the present. 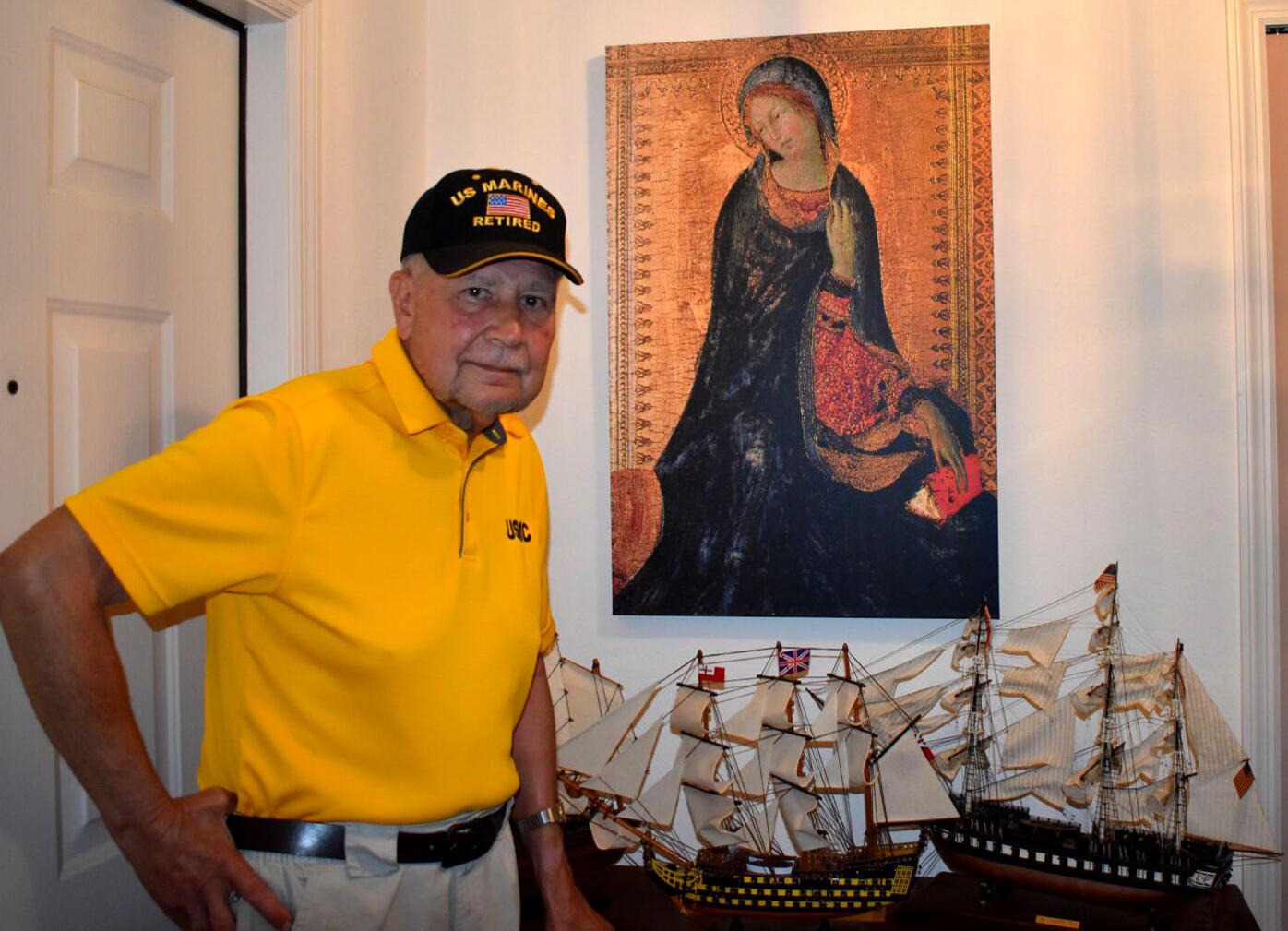 A spiritual man, Dan Bonenberger said that while he was in a coma for 14 days, a vision of the Blessed Virgin Mary changed the course of his life, and since then he’s been on a quest to help others — human and animal alike. 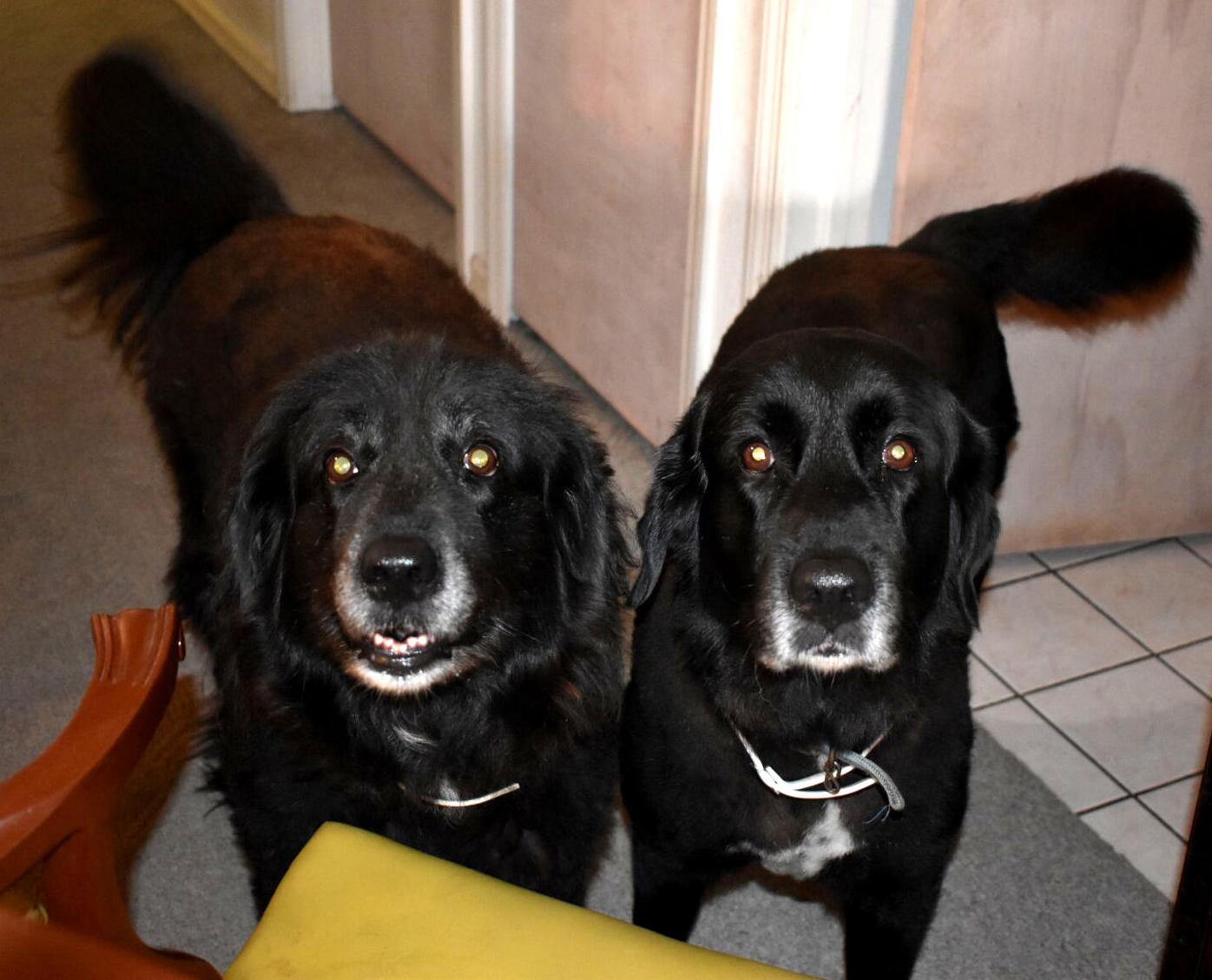 Over the years, Bonenberger has fostered and rescued dogs. His favorites are big dogs, including German shepherds. Currently, he owns a Great Pyrenees named Max, and black lab mix siblings Bailey and Cookie. 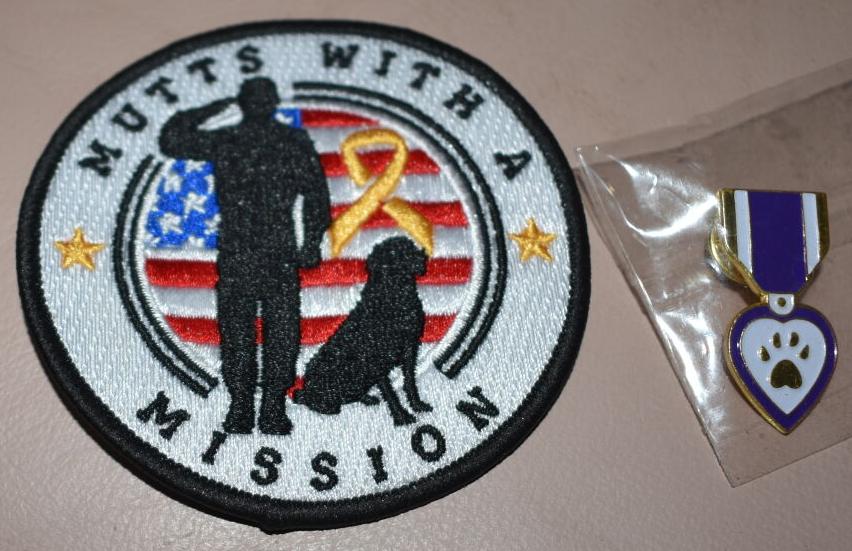 Of all the awards, honors, and relics, Bonenberger said, the most important to him are the badge from Mutts with a Mission, and Paws for Purple Hearts, both of which provide service dogs for our nation’s heroes.

Dan Bonenberger with Max, the Great Pyrenees, and one of the two black lab mixes he rescued.

Dan Bonenberger has an extensive collection of U.S. Marine figures from the Revolutionary War to the present.

A spiritual man, Dan Bonenberger said that while he was in a coma for 14 days, a vision of the Blessed Virgin Mary changed the course of his life, and since then he’s been on a quest to help others — human and animal alike.

Over the years, Bonenberger has fostered and rescued dogs. His favorites are big dogs, including German shepherds. Currently, he owns a Great Pyrenees named Max, and black lab mix siblings Bailey and Cookie.

Of all the awards, honors, and relics, Bonenberger said, the most important to him are the badge from Mutts with a Mission, and Paws for Purple Hearts, both of which provide service dogs for our nation’s heroes.

Let it be known Dan Bonenberger has a big heart for people and animals. He also gives big.

Recently the Animal Welfare League announced the Charlotte County man had donated $166,000 to the no-kill shelter.

But he’s also given large sums of money to other charities, including Shriners Hospitals, St. Jude Children’s Research Hospital, Mutts with a Mission, which provides service dogs for veterans, wounded warriors, law enforcement and first responders, and Paws for Purple Hearts, whose veterans train service dogs for other veterans.

Displaying a badge and pin from the service dog charities, Bonenberger said those artifacts mean more to him than just about anything else.

He also said there are charities with similar names, and before he donates, he checks out the nonprofit’s status to know exactly where the money goes.

What led him to give money away now?

“I don’t care about my legacy; I gave the money in memory of my dad, Robert J. Bonenberger,” said Dan Bonenberger, who also was a Marine who served in Vietnam and during Desert Storm.

“I think about his strength, hard work and good outlook,” said the son, adding, “My dad never talked about the war.”

However, his uncle did, and shared stories he knew of Bonenberger’s father’s experience during the war, including coming ashore and stepping over dead Marines who had been in the early waves to arrive on the beaches.

Robert J. Bonenberger died in 2011; when he became ill, his son bought a house a few doors down from his father to be near him and an ailing aunt, in their home city of Pittsburgh.

Clearly, his father was a strong and good role model for Bonenberger. The two were very close and shared experiences together, such as communing with nature and feeding deer in the countryside, where Bonenberger “bought an old strip mine that nobody wanted,” he said.

The acreage was resplendent with trees and provided a welcome retreat from being a police officer in the city. Then one day, “an oil and gas company got hold of me,” he said, and that was to change the course of Bonenberger’s life.

After doing an exploratory drilling, the company offered Bonenberger a lease. An abundance of natural gas was found under the property, and Bonenberger was told his property, of which he owned the mineral rights, would produce natural gas for the next 100 years.

When asked whether that was the source of his wealth, Bonenberger laughed and said, “Well, I was in the narcotics unit, but I didn’t take anything, so, yes.”

A story in “Business Insider,” an online business publication, quoted Jerry Simmons, director of the National Association of Royalty Owners, who said, “There are millionaires being made every day from North Dakota to Pennsylvania.”

Bonenberger said he bought the land as a retreat, but “God was good to me; He is still watching out for me.”

Beside honoring his father by giving to others, there is another reason for his charitable bent, The Daily Sun learned when visiting Bonenberger at his home: “I was blessed; in Vietnam I should have died,” he said.

A spiritual man, a statue of St. Francis of Assisi is in front of his house. Inside is a painting of the Virgin Mary, which has strong significance for Bonenberger and the reason why he decided to spend the rest of his life giving to others, especially dogs, as one saved his life long ago.

Recounting his Vietnam experiences, Bonenberger said his first brush with death occurred when he was on a reconnaissance mission. He was taking the lead on a trail up a mountain when the military dog ahead of the troops suddenly “stopped and showed his teeth.”

Bonenberger told his troops to go back down a half mile. Suddenly, the enemy appeared on both sides of the trail the U.S. Marines had been on, and a gunfight ensued.

In another incident, “a mortar shell hit a tree and I was knocked unconscious,” he continued. Parts of the tree bark embedded in his body, but fortunately the military doctor who tended to Bonenberger stabilized him before he was medivacked from Vietnam.

However, it was touch and go for the Marine. Bonenberger was in a coma for 14 days and he developed a high fever of nearly 104 degrees from malaria.

His weight, which has been at 175 pounds all his adult life, dropped down to 90 pounds, said Bonenberger, who displayed a faded, color photo of himself shortly after his illness.

While lying in his hospital bed, “I got up and saw the Blessed Virgin Mary come to me. She said, ‘Get up,’” he said, adding, “I got up because of Her.”

After the vision, Bonenberger vowed to devote the rest of his life to helping others, including dogs, as one had saved his life.

Visiting Bonenberger at his home, it was clear dogs are near and dear to him. A Great Pyrenees named Max and sibling dogs Cookie and Bailey, black lab mixes, came bounding in to meet a visitor.

Max was fostered by Bonenberger before being “adopted,” and the other two were rescued by their master, as were other large dogs before them.

Life is good for Bonenberger now; he bought a house in 2012, a year after his father’s death, but he didn’t move down here until 2015.

Since he had large dogs and didn’t want to transport them by plane, Bonenberger said he bought an RV, and drove the “family” down to Florida, from Pittsburgh.

When he isn’t helping others (and animals), Bonenberger manages to find time to live the good life here in Florida. He has a girlfriend, several nice vehicles, and a powerboat to enjoy on our waterways.

Bonenberger had a good life in Pittsburgh too, albeit a cold, non-tropical one. He had a career as a mechanical engineer, then later, at the age of 39, he became a member of the Pittsburgh Bureau of Police, retiring as a sergeant.

He remained a Marine after his active service, in the Marine Corps Reserve. Altogether, he served “thirty-nine years, seven months, and seven days,” he said.

On shelves are replicas of Marines going back to the Revolutionary War up to the present.

Along with relics, they will someday be donated to the Military Heritage Museum in Punta Gorda, he said.

Since moving to the area, Bonenberger hasn’t looked back.

“I found paradise; if Heaven is better than this, I’m ready to go anytime.”