You are the owner of this article.
Edit Article Add New Article
I want to
Publications
Subscribe
Restaurant Directory
Homes for Sale
Cars for Sale
Jobs
Classifieds
E-Paper
News Archives
Obituaries
Calendar
App
Public Notices
Your Newspapers
Contact Us
1 of 14 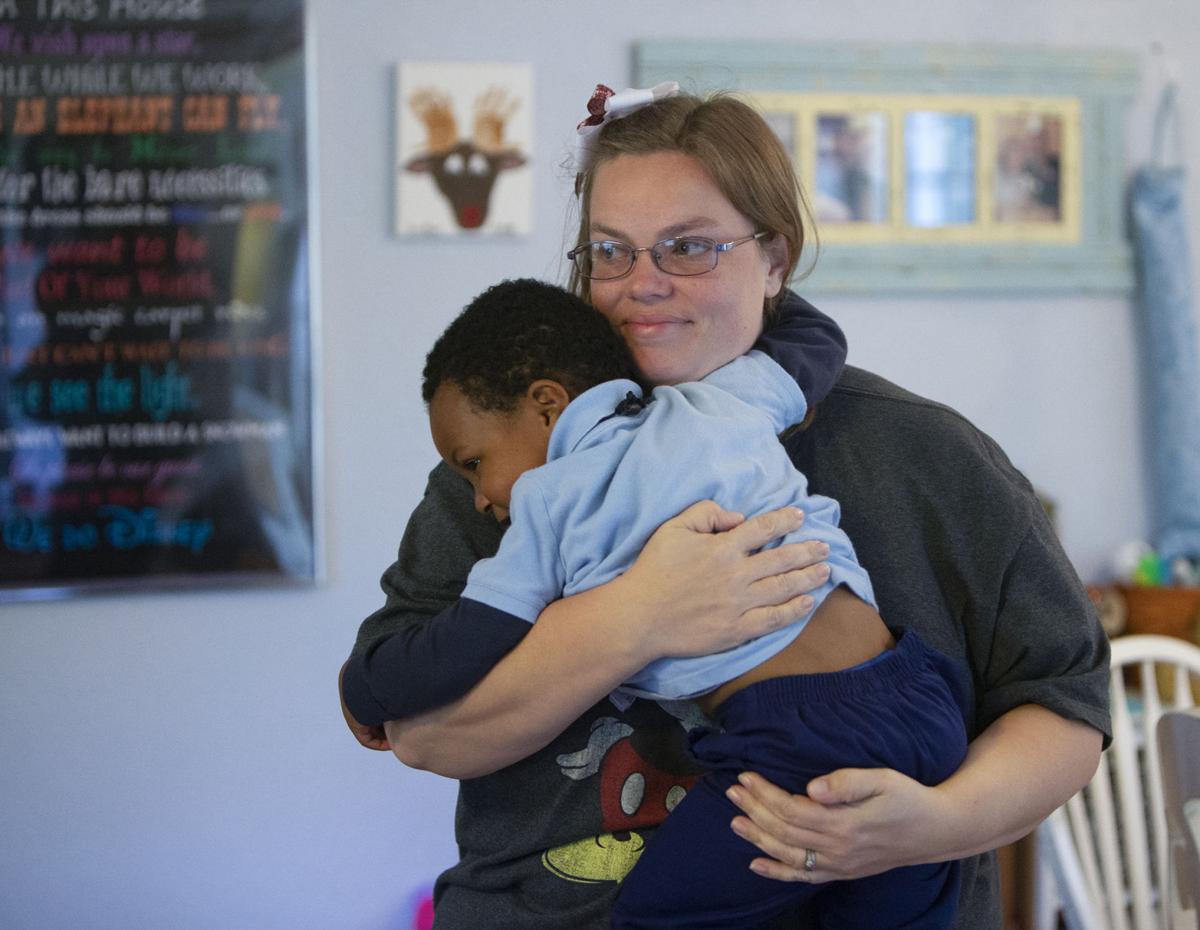 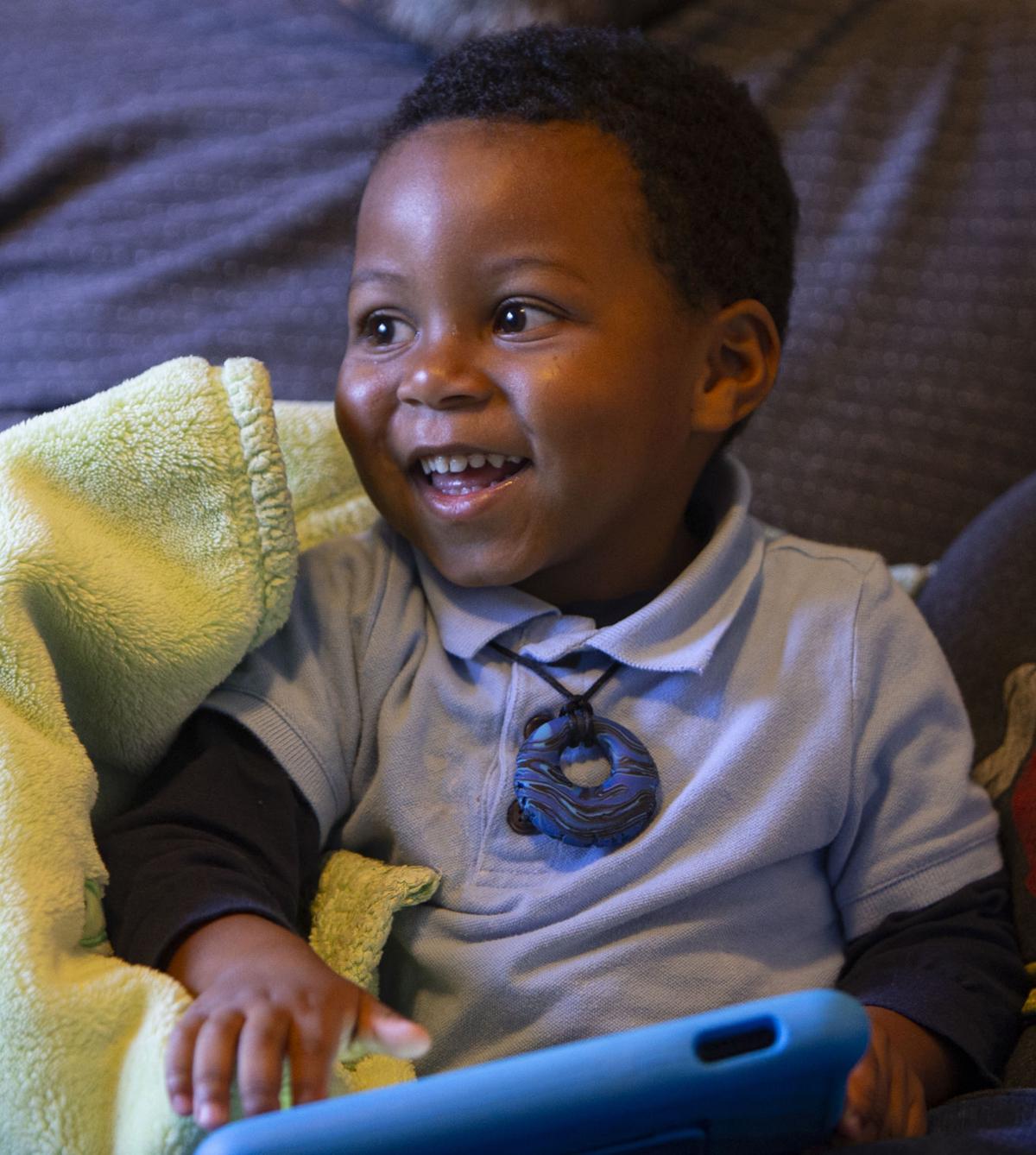 Stefan sitting with his parents in their Port Charlotte home Nov. 21. 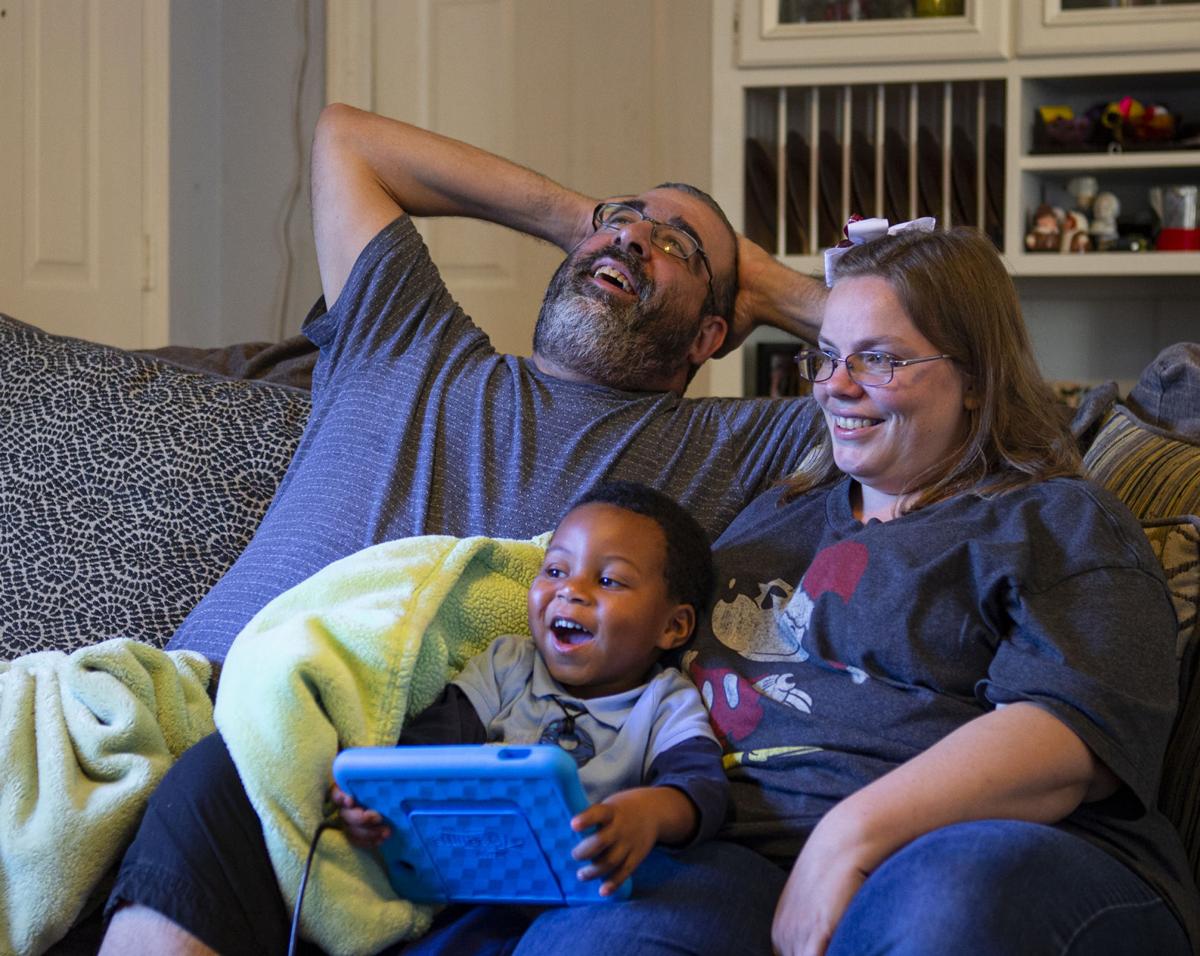 Charles and Alyssa Richardson recall a visit to Disney with their son Stefan in their Port Charlotte home Nov. 21. 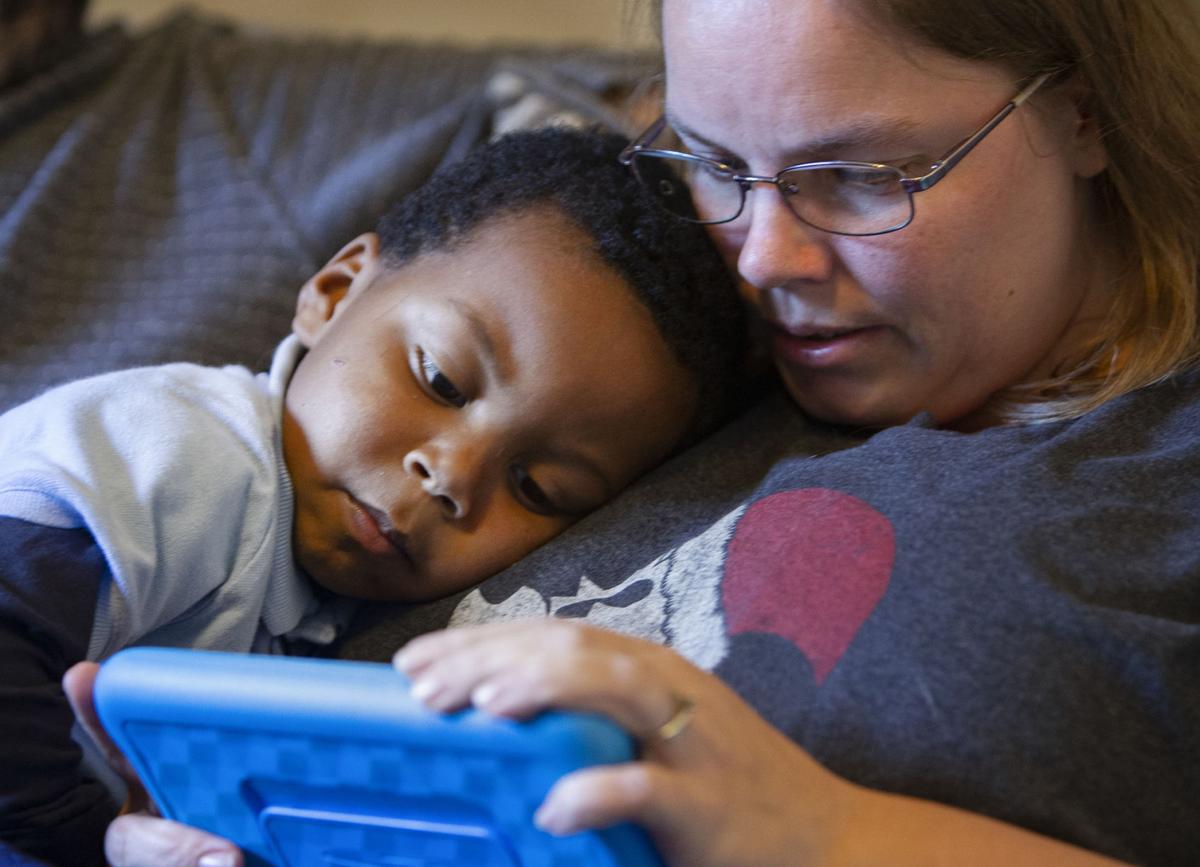 Stefan and his mom Alyssa Richardson play with his favorite game. 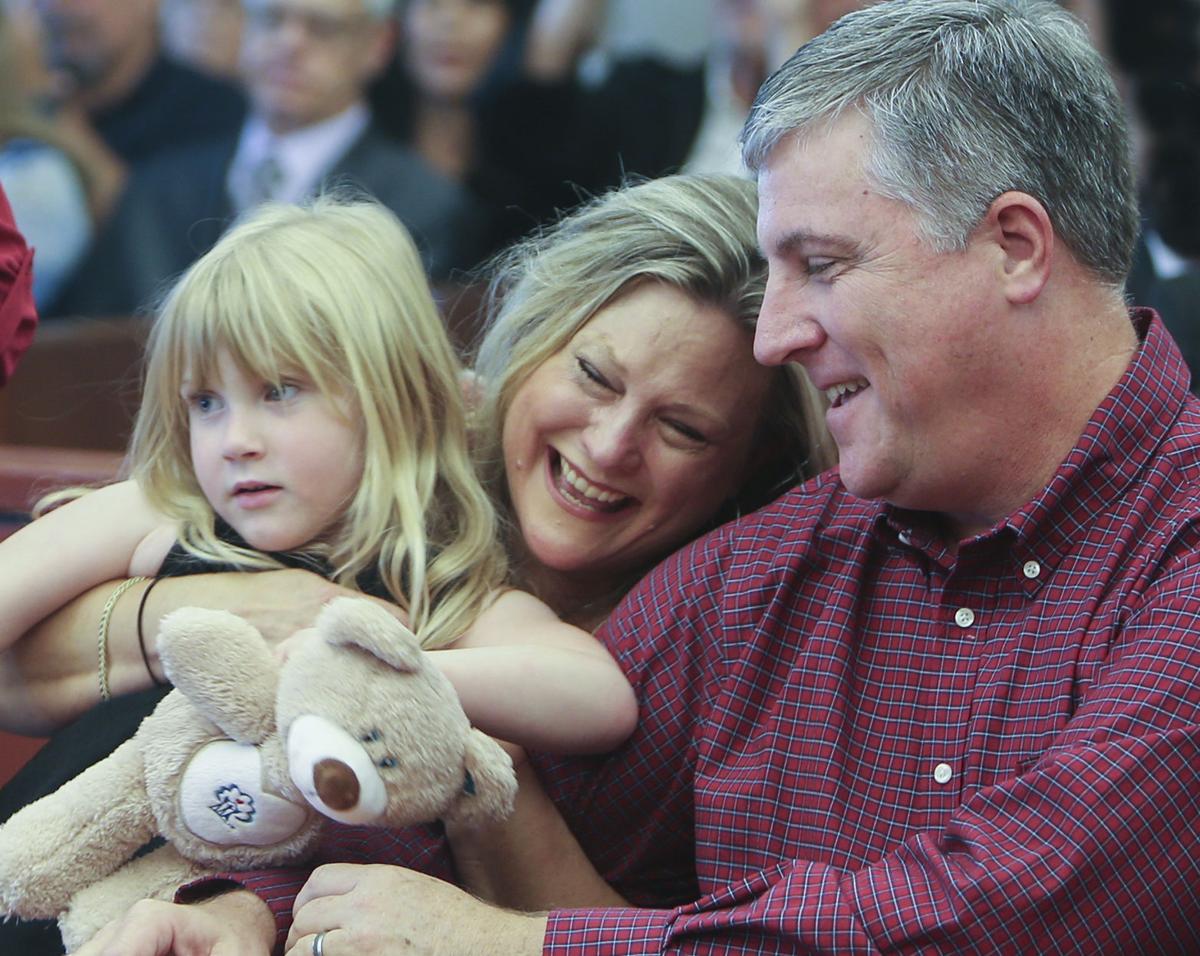 Paula and James Terry react to the adoption of their daughter Hadley during a mass finalization hearing at the Charlotte County Justice Center on Nov. 22. 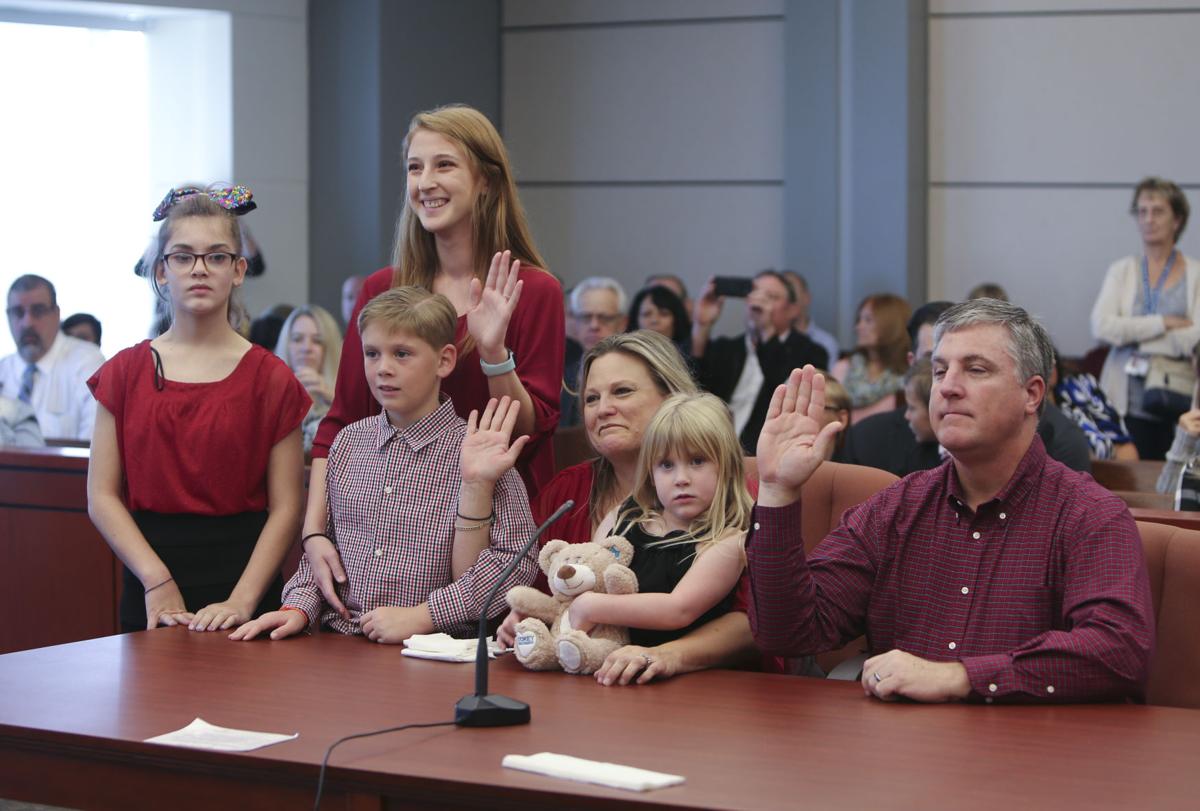 The Terry family are sworn in during mass finalization hearings at the Charlotte County Justice Center on Nov. 22. Parents Paula and James Terry, along with their daughter Meagan, adopted Lily, Lucas and Hadley to be part of the family. 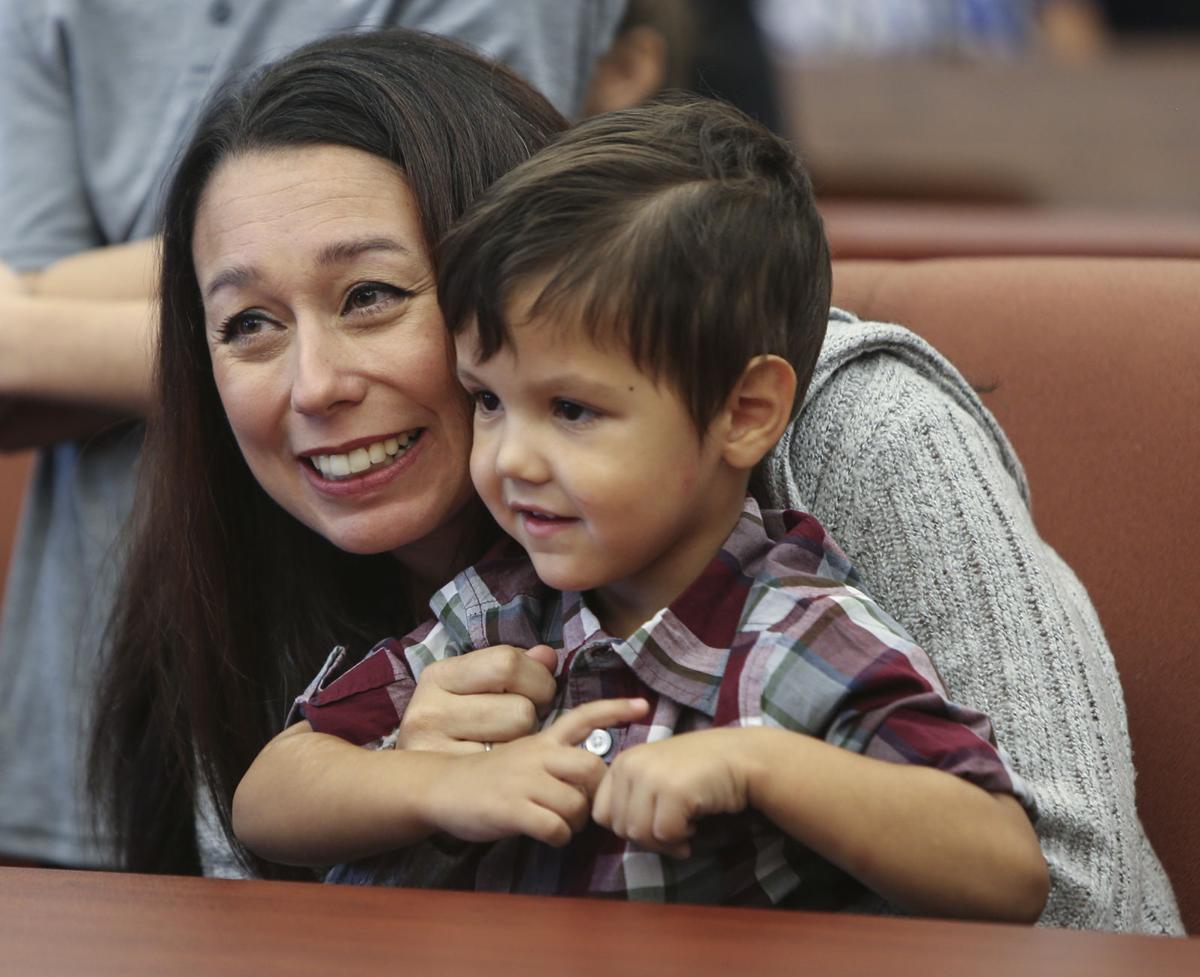 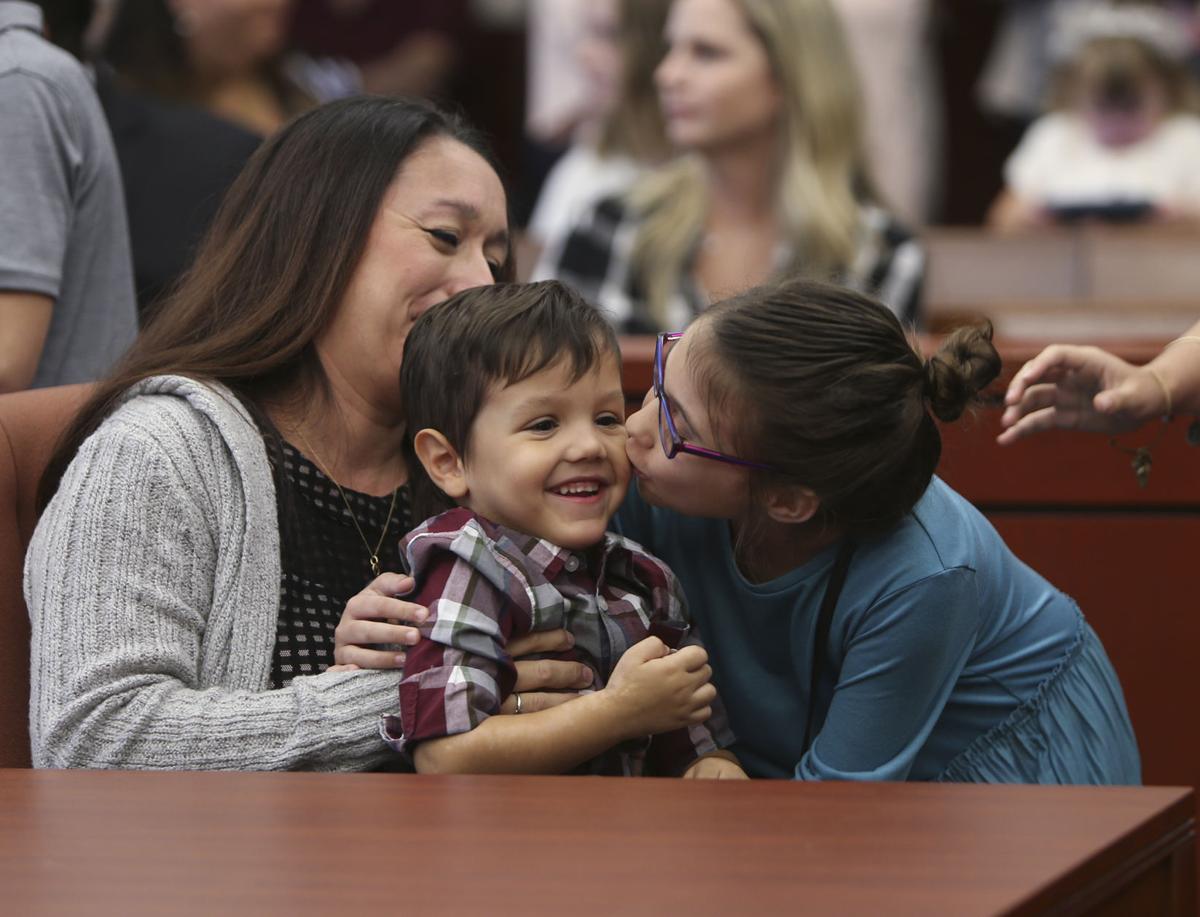 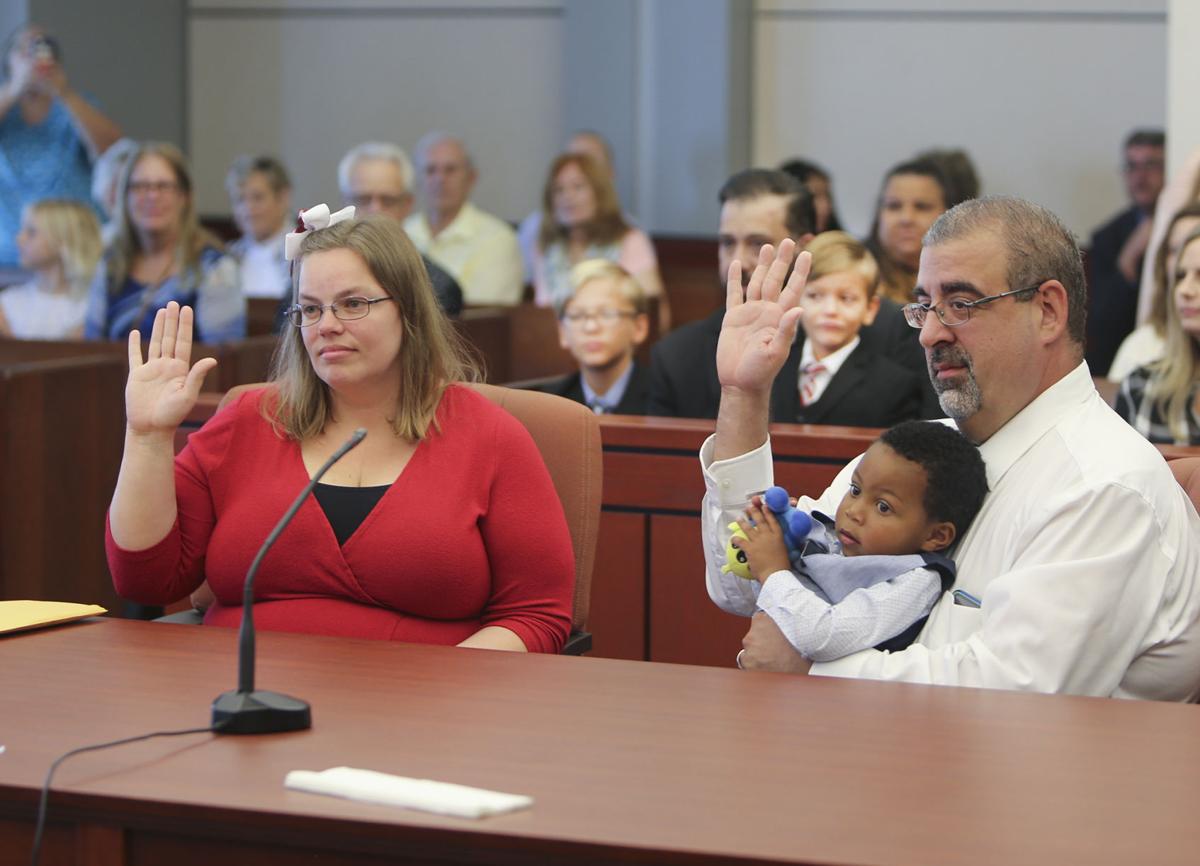 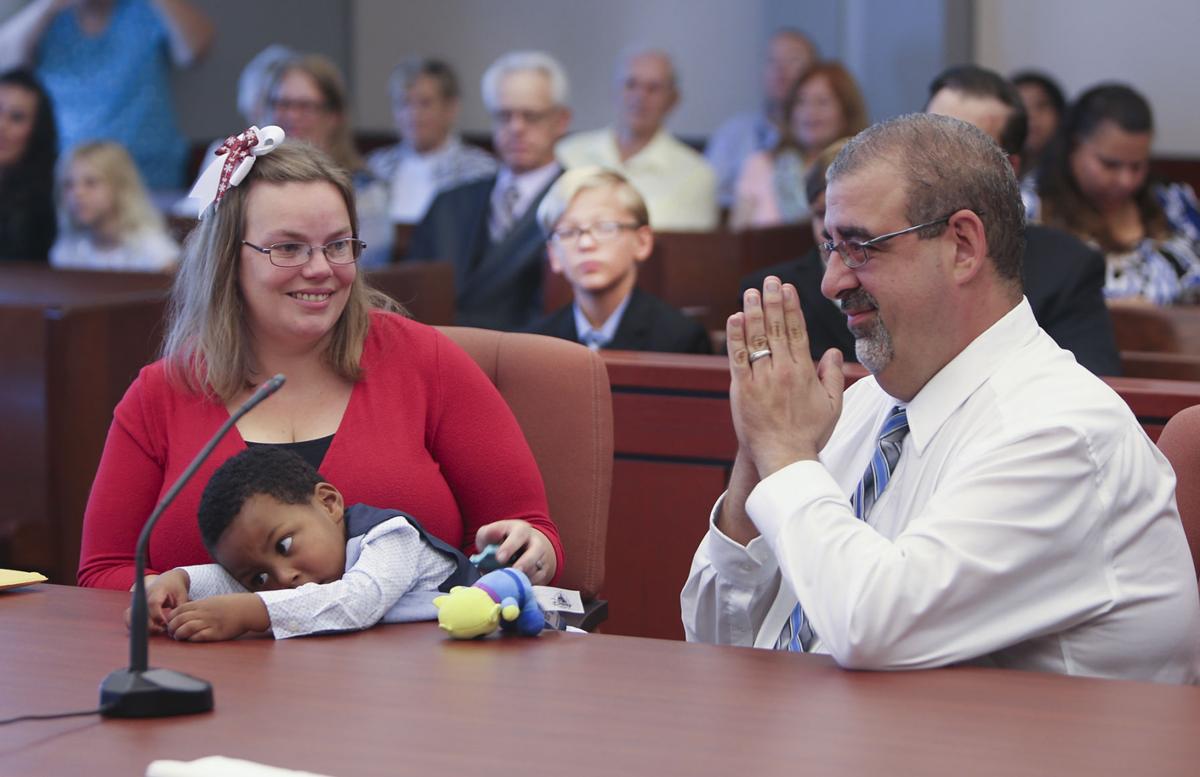 Alyssa and Charles Richardson react after a mass finalization hearing was completed for their son Stefan at the Charlotte County Courthouse. 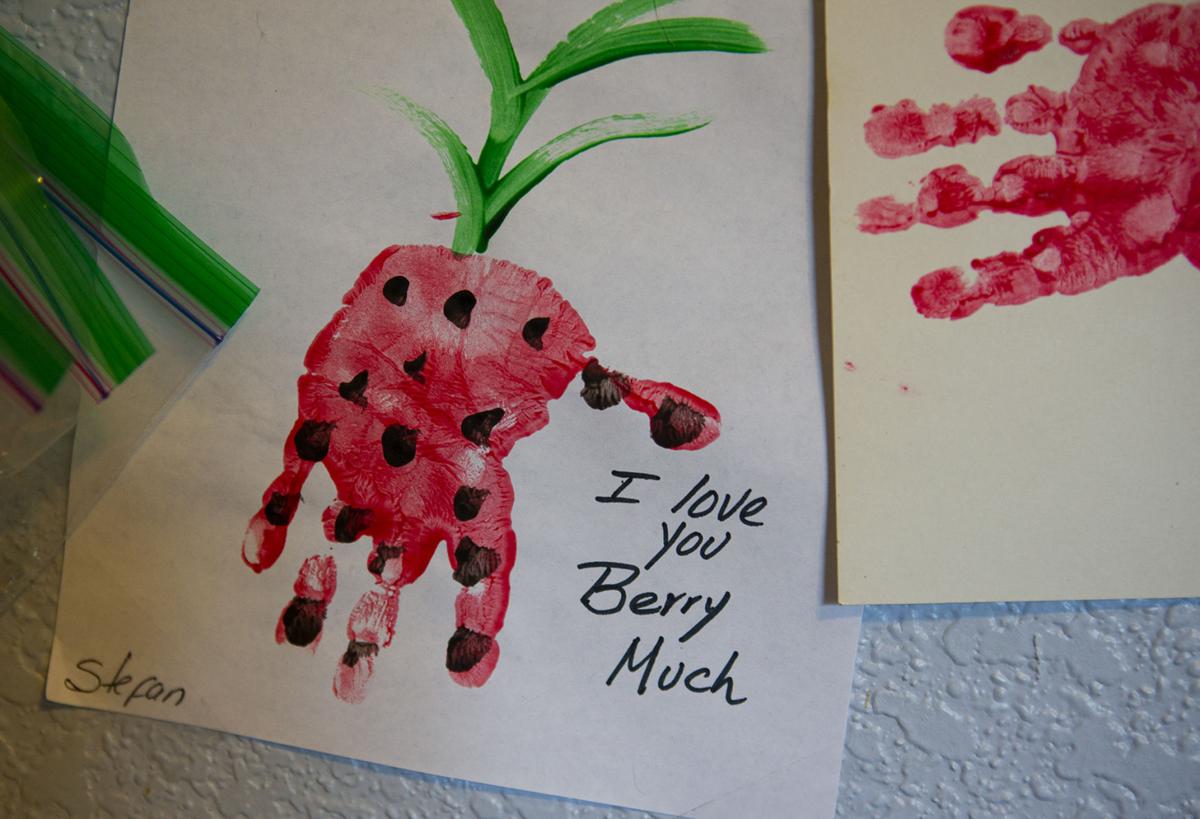 Some of Stefan's art work hangs on the walls of Alyssa and Charles Richardson's Port Charlotte home. 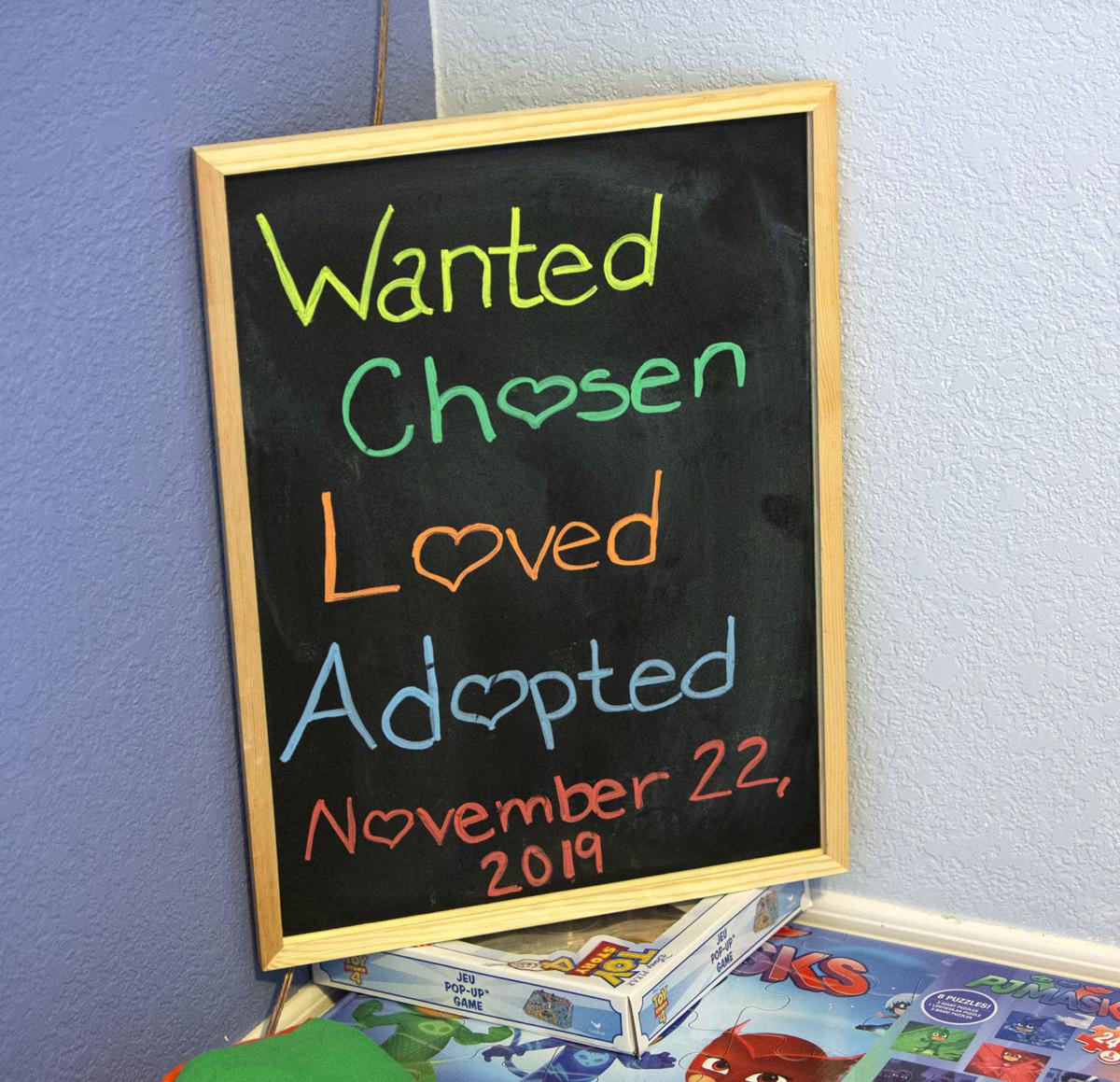 Chalkboard sign Alyssa and Charles Richardson made for their son Stefan for his official adoption day. 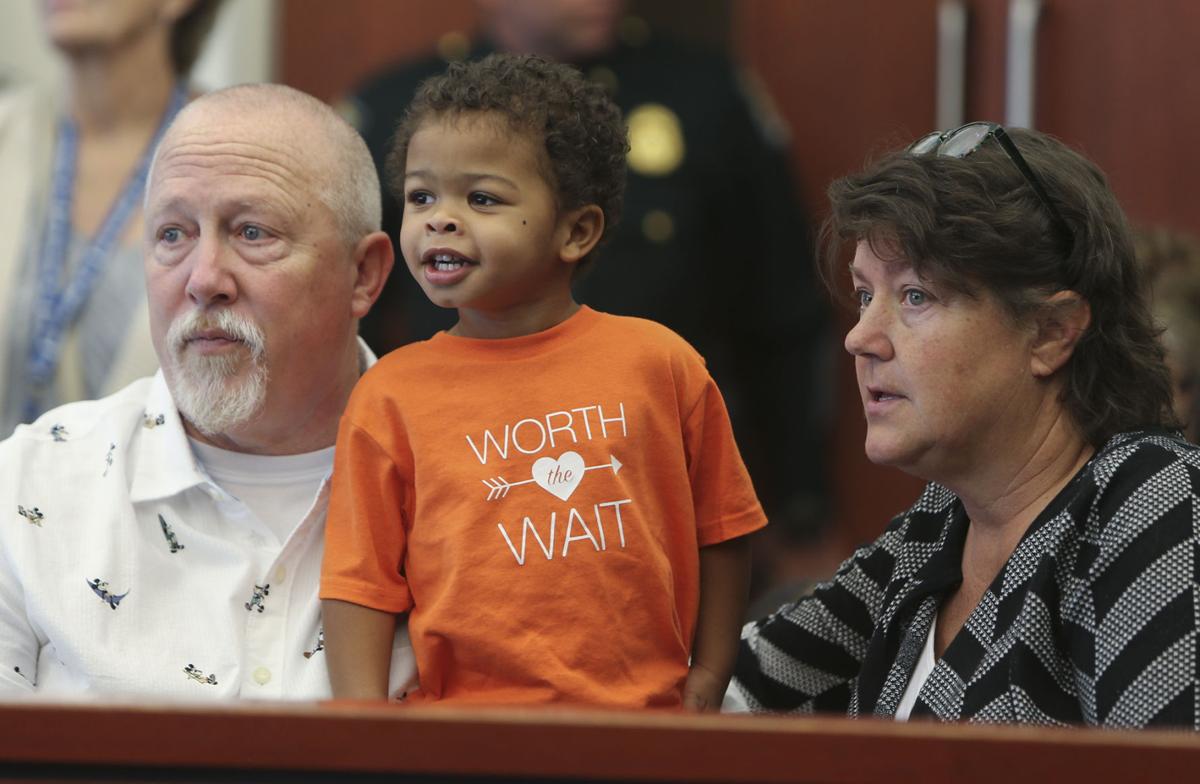 Chris Gagman holds Malachi, who was adopted by Patricia Cowling-Hopkins during a mass finalization hearing at the Charlotte County Justice Center. 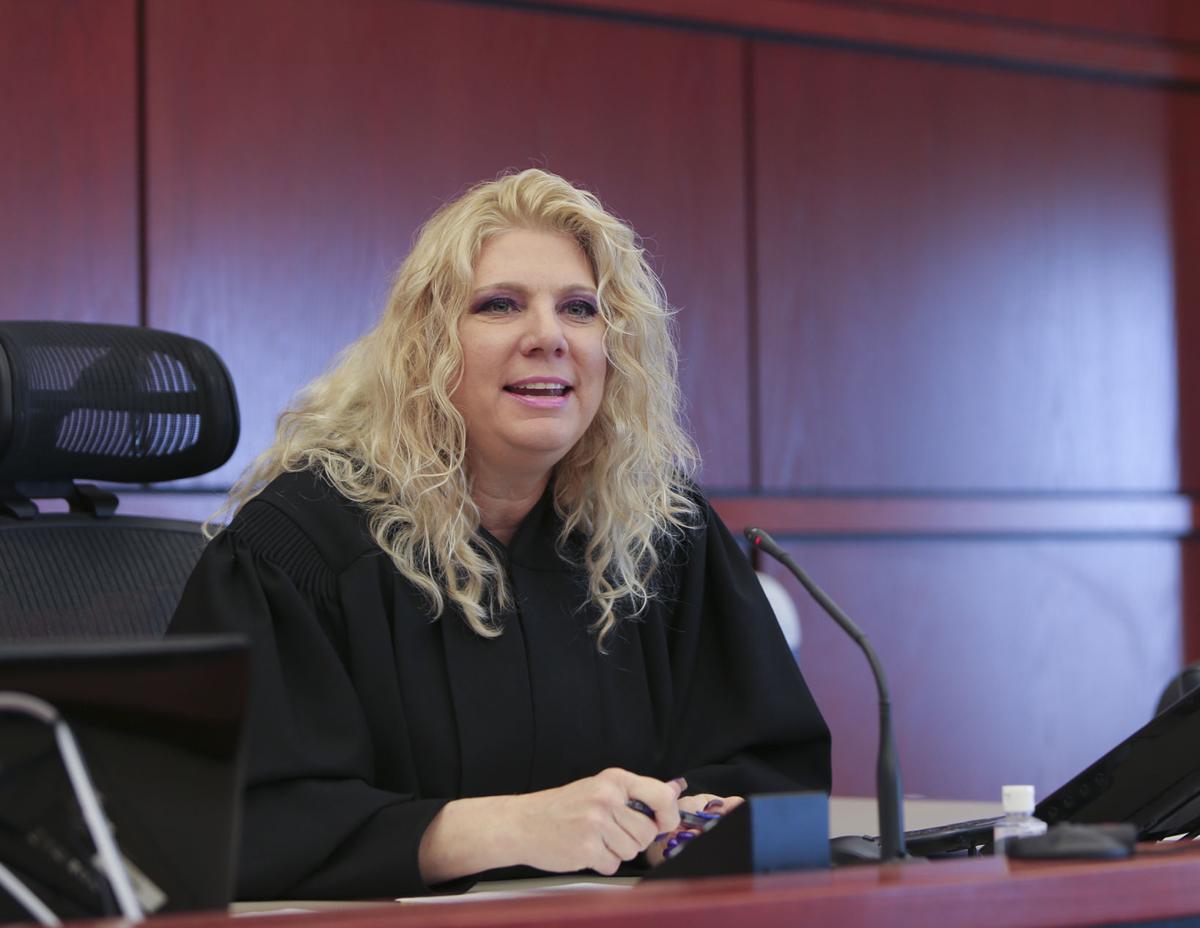 Stefan sitting with his parents in their Port Charlotte home Nov. 21.

Charles and Alyssa Richardson recall a visit to Disney with their son Stefan in their Port Charlotte home Nov. 21.

Stefan and his mom Alyssa Richardson play with his favorite game.

Paula and James Terry react to the adoption of their daughter Hadley during a mass finalization hearing at the Charlotte County Justice Center on Nov. 22.

The Terry family are sworn in during mass finalization hearings at the Charlotte County Justice Center on Nov. 22. Parents Paula and James Terry, along with their daughter Meagan, adopted Lily, Lucas and Hadley to be part of the family.

Alyssa and Charles Richardson react after a mass finalization hearing was completed for their son Stefan at the Charlotte County Courthouse.

Some of Stefan's art work hangs on the walls of Alyssa and Charles Richardson's Port Charlotte home.

Chalkboard sign Alyssa and Charles Richardson made for their son Stefan for his official adoption day.

Chris Gagman holds Malachi, who was adopted by Patricia Cowling-Hopkins during a mass finalization hearing at the Charlotte County Justice Center.

Alyssa seemed a little nervous, while Charles poked fun at her. An attorney gave Stefan a toy car to accompany his alien. He played, making motor noises, while the attorney asked his parents questions.

“Do you promise to provide not only for Stefan’s material needs but also his mental, spiritual, moral and financial needs?” the attorney asked.

Though Stefan has lived with Alyssa and Charles for almost two years, Friday he officially became a Richardson.

The number of children eligible for adoption statewide is the highest it has ever been, according to Florida Department of Children and Families’ data spanning back to 2011. November is National Adoption Month, and to celebrate, Stefan, along with 11 other Charlotte County children, were officially adopted by their foster families Friday morning at the Charlotte County Justice Center.

“All children deserve a safe, loving home, where they are free from abuse and neglect, and right now, many don’t have that,” said Florida Department of Children and Families Secretary Chad Poppell. “I encourage all Floridians who are able and willing to adopt to please consider making that life-changing decision.”

Though there were only 12 children and 8 families, roughly 100 people sat together in a courtroom during a mass adoption last week at the courthouse in Punta Gorda. They celebrated new families.

“The process can be very long and heartbreaking,” said Judge Evans. “This is one of the best days as a circuit court judge in unified family court.”

Adoption by the numbers

Half of the 4,979 eligible children in October 2018 were under the age of 7, according to DCF’s child welfare statistics.

For the 124 newborn children eligible statewide for adoption, 105 were adopted, or 84%.

But as the child gets older, their chances of adoption decrease.

Eighty-one percent of these 1-year-olds were adopted within a year.

There are currently 39 children available for adoption in Charlotte County, 32 of which have already been placed with a family who wants to adopt. The Children’s Network of Southwest Florida is looking for families for seven children.

Practically from the moment Stefan Richardson was born, he was in the system.

He lived in a foster home the first two years of his life, and then lived with a relative. His birth mother wasn’t able to take care of him; she was young and had been incarcerated. At 2-years-old, Stefan moved in with a green blanket to his now-adoptive parents, Alyssa and Charles Richardson.

The parents wanted to adopt after failing to conceive their own child, the 41-year-old father said.

While navigating the adoption process, and specifying they wanted a younger child, Alyssa knew Stefan’s guardian ad litem, who was looking for another placement for the then-2-year-old.

The first time Stefan was in the Richardson’s home, he said “I’ll be back.” He called Alyssa “mommy,” but at the time called every female figurehead “mommy.”

Stefan was right, though, and has now lived with the Richardsons for almost two years.

“We embraced him with open arms,” Charles said, wanting to show their new son the couple’s love for Disney movies.

And, of course, there was a honeymoon phase that faded. Stefan started retaliating, spitting, yelling and rebelling in ways a toddler could. He got in trouble at day cares, and was even kicked out of a few.

“You have to go into it with an open mind because you never know what to expect,” Alyssa said.

But, with time, Stefan realized he could trust his new family. He had to learn the rules, follow instructions, and started only calling Alyssa his “mommy.”

Stefan is now in pre-school at Neil Armstrong Elementary School in Port Charlotte. He goes to Disney World monthly with his parents, who have annual passes. Charles looks forward to getting Stefan into an organized activity, like a sport, sometime soon, and watching Buccaneers football games with his new son.

Charles watched Thursday afternoon as Stefan hugged his mom, less than 24 hours away from it all being official. “This guy is just a godsend,” he said.

Four-year-old Hadley Terry brought her teddy bear to the table. She, wearing red, sat in the lap of her new mom, Paula Terry, who was also wearing red. Her new sister, Meagan, had her arms around Hadley’s siblings, Lucas and Lilly.

All of them were wearing red.

The attorney asked Paula the same question: would she care for all the needs of these three siblings?

Once the sibling group of three were announced official Terrys, Paula and her husband James hugged their new family members.

“It’s the best feeling in the world,” Paula said. “We’ve wanted this for so long.”

Paula and James have fostered the siblings for almost three years.

Meagan, who was an only child, isn’t alone anymore, she said.

“We had a lot of love we wanted to share,” Paula said.

The family was just going to adopt one child, James said, until they learned about the huge need for sibling group adoptions. “We felt there was something we had to do.”

“A weight has been lifted,” James said.

Mykal and Don York had seven kids Thursday. Now, they have eight.

Though 4-year-old Jeremiah had been living with the Yorks for three years, he finally became a York Friday morning.

“He’s now yours,” his now older sister, Keeley, told her mom after Judge Evans made it official.

The Yorks began caring for Jeremiah as a part of a respite care program a few years ago. His father wasn’t around, and his mother had a substance abuse issue, Mykal said. Eventually, he just stayed.

“It feels good to show our kids the love you can give to others,” Mykal said, with her eldest daughter, Jayden, 18, acting sometimes as a second mother.

“He cuddles with me, he’s like a baby,” Jayden said.

Now Keeley and Jeremiah can continue to pretend the floor is lava, and other games, as brother and sister.

The Sarasota YMCA serves as the Lead Agency for Community Based Care for Sarasota, Manatee and DeSoto counties. Under the leadership of the Sarasota YMCA, the Safe Children Coalition is a collaboration between the Y and local community agencies who provide child welfare services for dependent children who have been abused, neglected or abandoned. Child protection services provided include case management, foster care, independent living and adoptions.

For more information on foster parenting and adoption, call 1-866-661-5656 or visit www.sarasotaymca.org/ safechildrencoalition.

The Children’s Network of Southwest Florida has many resources for foster and adoption parents in Charlotte, Lee, Collier, Hendry and Glades counties. The Children’s Network is responsible for more than 2,500 abused and neglected children, and delivers a comprehensive local system of care through subcontracts with more than 50 social service agencies. There are about 500 children living in licensed foster homes in the region.

For more information about Children’s Network and its programs, visit www.childnetswfl.org or call at 239-226-1524.

Substance abuse is the major reason families and children are in the system, according to Children's Network of Southwest Florida quality management supervisor Melissa Bonner.

The second a substance-exposed baby is born, he or she is actively withdrawing from their opioid drug dependency.

This is called neonatal abstinence syndrome, and could include a slew of immediate symptoms, including inconsolable irritability, sleeplessness, fever, nasal congestion, rapid breathing, skin excoriation and even seizures and apnea, according to Dr. William Liu, the medical director for Golisano Children's Hospital's neonatal intensive care unit.

Most babies with neonatal abstinence syndrome get better in five to 30 days, according to March of Dimes, a non-profit devoted to the health of moms and their babies.

Longer-term symptoms are harder to determine, Liu said, due to other factors that may impact the baby's outcome.

"The drug baby is often also not supported by a stable family, with other socio-demographic disadvantages," he said.

It does seem, however, that these babies are at risk for a lower IQ at 5-years-old, lower cognitive scores, attention problems and poorer performance on academic testing.

Treating these babies requires a multidisciplinary approach, most of which is non-pharmacologic treatment, or soothing behaviors and surroundings to calm the withdrawing baby.

"An engaged and participatory parent is so important to the success of (non-pharmacologic treatment)," Liu said.

Sometimes, though, medication is needed if the symptoms are severe. A team of nurses, occupational therapists and physicians assess the child's level of withdrawal with the Finnegan Score System. The system analyzes disturbances in the infant's central nervous, metabolic, respiratory and gastrointestinal systems.

The baby will be treated with opioids and non-opioid medications. "Long-term use of opioids in the baby can risk perpetuating his dependency," Liu said.

What a wonderful story. I know all these children with their new families will have a very happy Thanksgiving. Thank you, parents, for taking these children into your hearts. You are the best!