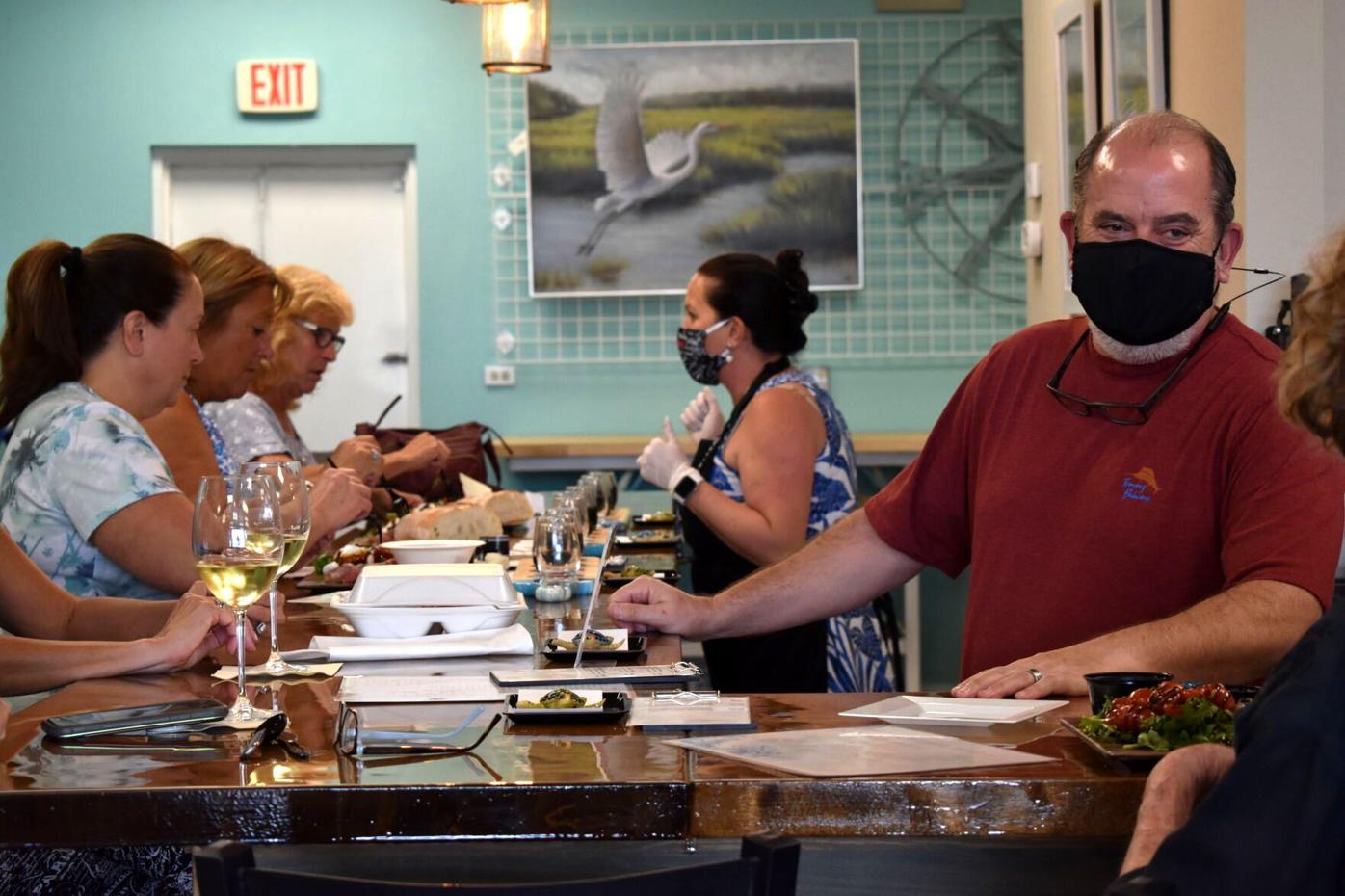 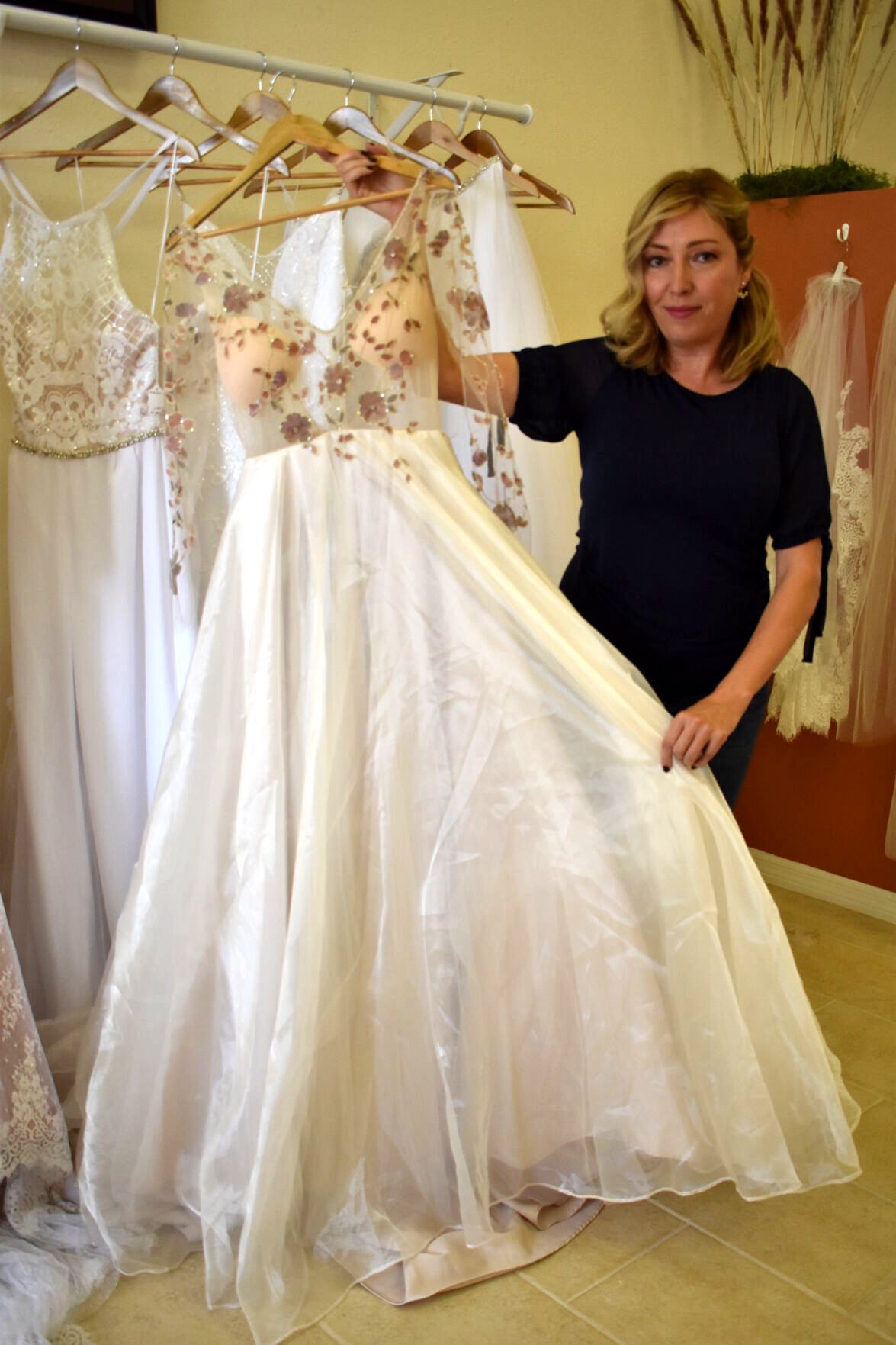 Designer Lily Rivera, who has recently arrived on the international and national fashion scene for her bridal designs and gowns, decided to locate her business in Punta Gorda. 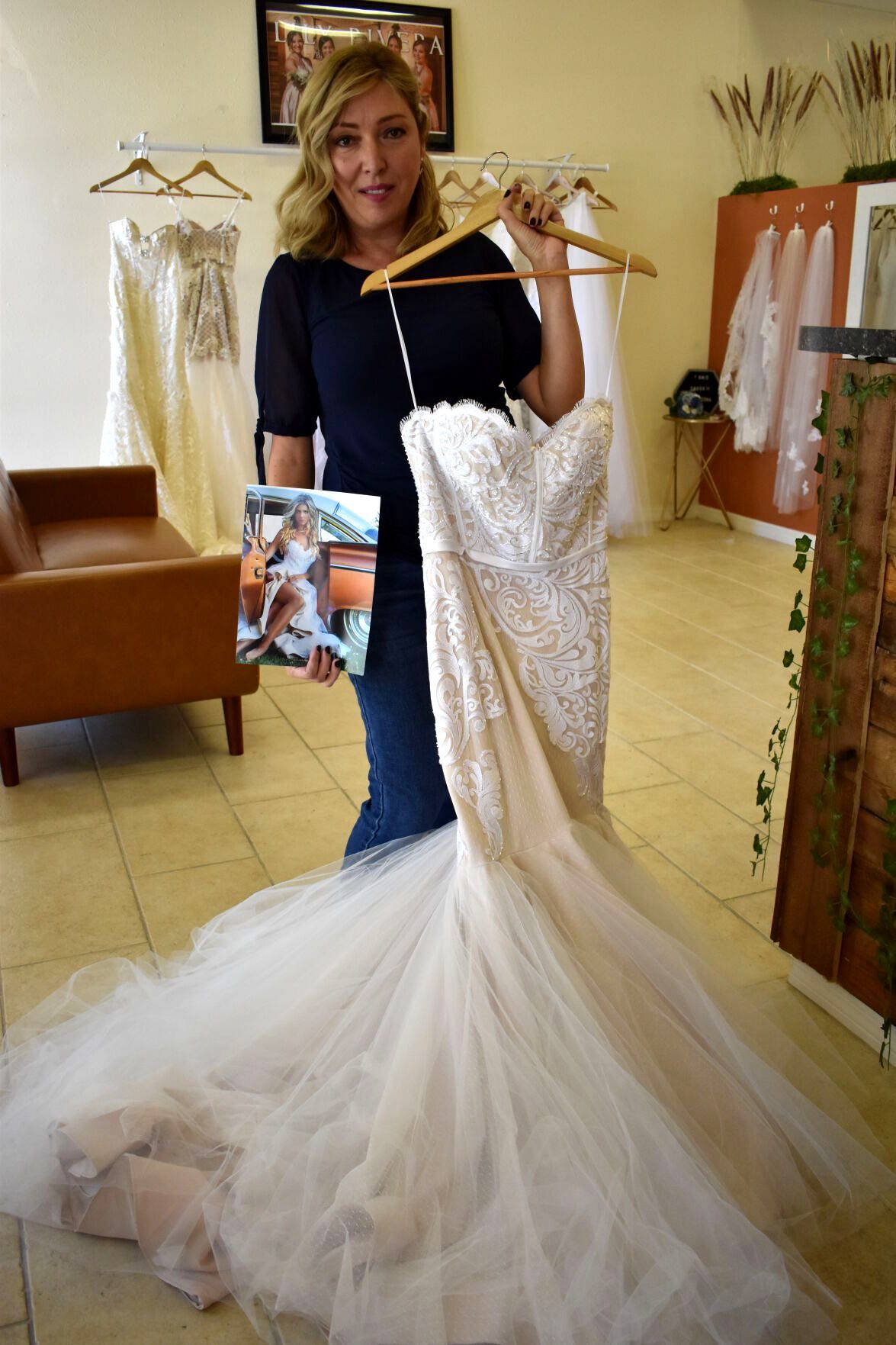 Since opening her business in Charlotte County, Lily Rivera’s original bridal gowns have been ordered by brides-to-be both domestically and overseas. Recently, a TV reality star ordered one of Rivera’s bridal gowns. 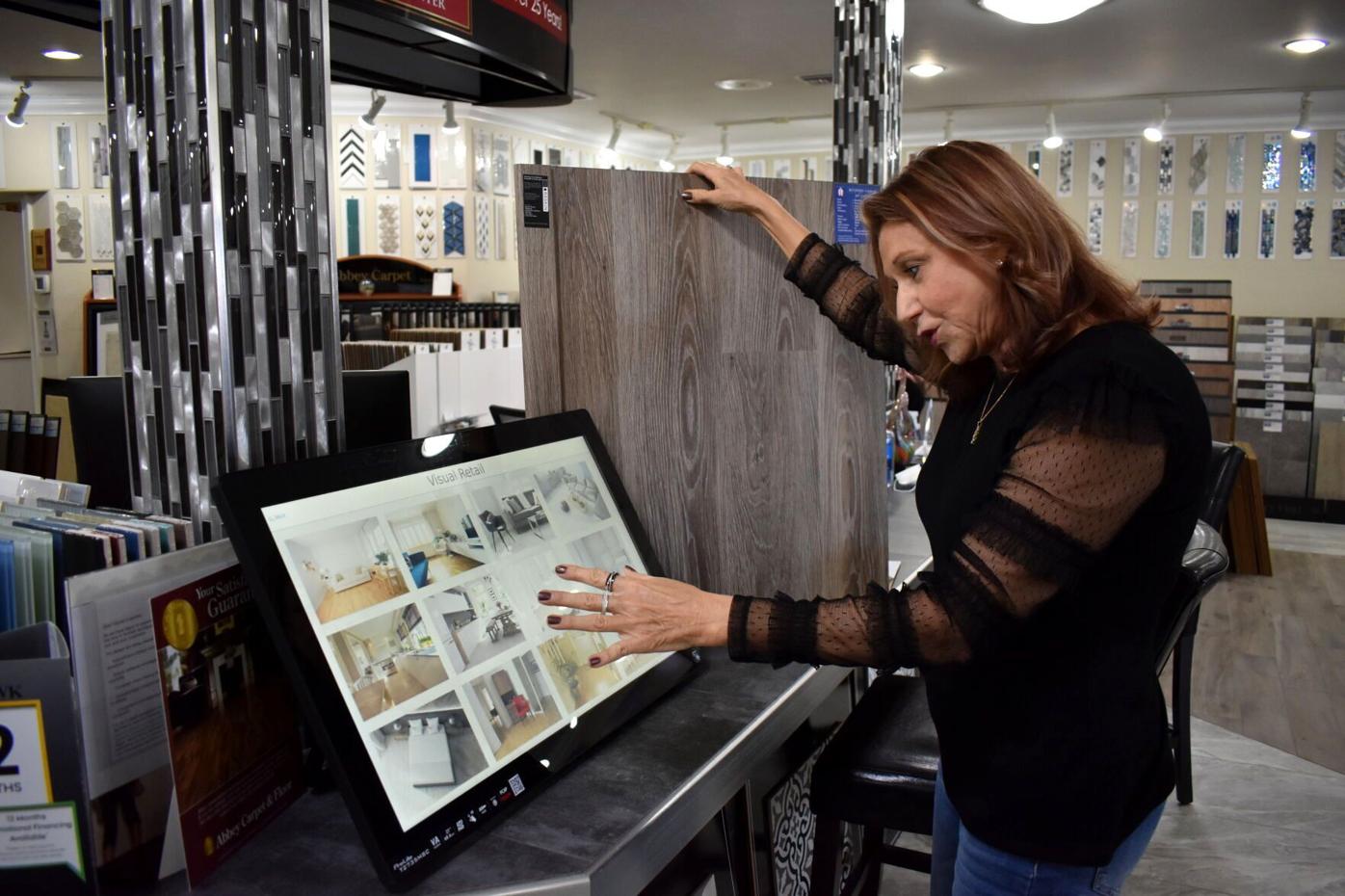 Marjorie Benson, owner of Friendly Floors, bought the business from her parents 26 years ago and entered into the age of high-tech. Here, she helps a customer design a room with an interactive device.

Designer Lily Rivera, who has recently arrived on the international and national fashion scene for her bridal designs and gowns, decided to locate her business in Punta Gorda.

Since opening her business in Charlotte County, Lily Rivera’s original bridal gowns have been ordered by brides-to-be both domestically and overseas. Recently, a TV reality star ordered one of Rivera’s bridal gowns.

Marjorie Benson, owner of Friendly Floors, bought the business from her parents 26 years ago and entered into the age of high-tech. Here, she helps a customer design a room with an interactive device.

Several Charlotte County small business owners recently told The Daily Sun their businesses are thriving and they are glad they decided to put down roots in the area.

Designer Lily Rivera, who recently reached international fame for her exclusive branded bridal dresses and gowns; Lori and Tim Sandage, owners of Coastal Expressions & Wine; and Marjorie Benson, owner of Friendly Floors, shared their stories of why they chose to locate in Charlotte County.

According to Heartland Forward, whose research was reported by Forbes in May 2020, the Punta Gorda metro area was identified as being one of 20 top entrepreneurial ecosystems.

Perhaps no one could agree more that the area is tops, than Marjorie Benson, the Friendly Floors owner who bought the business from her parents 26 years ago, and she’s never looked back.

“Mom and Dad built the business on a shoestring in 1986,” she said.

Then, the business was located across from her showroom at 3785 Tamiami Trail and was only 400 square feet, Benson said. Her parents and her brother operated the business for nine years.

Benson’s Friendly Floors is in a 4,000-square-foot building. She said her business “has grown every year, but we worked hard for that.” She said the secret is to provide good customer service and to “make sure our clients get the right things for their decor and budget.”

Apparently, her customers spread the word, as a good portion of her business comes from “word of mouth.” Also, Friendly Floors was voted the best flooring store in The Daily Sun‘s annual readers poll 17 years in a row, making her the recipient of the Readers’ Choice award, she said.

Small business defined by the SBA

The Small Business Administration defines a small business as a privately-owned corporation, partnership or sole proprietorship with few employees and less annual revenue than a corporation or regular-sized business.

Lori and Tim Savage relocated their Rotonda West business, Coastal Expressions, to Punta Gorda where they own a home. The store, located in the Bal Harbor Boulevard shopping mall, opened Nov. 12 last year.

They added a wine bar to their business, which serves food such as Charcuterie and Burrata boards. The store also has a wine store portion, and it sells home decor items and gifts.

The couple moved to Punta Gorda from Seattle. Lori worked in the corporate world in healthcare and software sales, and she continues to work as a director of computer security.

The power couple, who have lived in big cities, wanted to live in a smaller city and “be part of a community,” said Lori, adding, “We are doing well here; we got a warm reception from the community, and we have a lot of regular customers already.”

Lori said they chose to locate in “interior Punta Gorda” after many in town said it was “too busy” in downtown Punta Gorda during snowbird season.

Once things become more quiet — probably when the season ends — Lori said she plans to become more involved in the community and to “give back.”

In addition to the shop, Lori also runs Coastal Expressions Staging and Design — a staging business for vacant or model homes.

Smart Asset considered three factors: the proportion of people in a county with small business income, how much business income those people reported, and the amount of tax a potential resident must pay on their income.

Small businesses are typically incorporated as pass-through entities, meaning the business owners pay income taxes on the company profits rather than the company itself paying income tax.

Because of this, income taxes can play a major role in determining the financial success of a given small business.

To determine income tax burdens across counties, the national median household income was used. Next, relevant deductions and exemptions were applied before calculating federal, state and local income taxes for each location.

When Lily Rivera, owner of Lily Rivera Bridal & Alterations, was one of 10 designers out of 5,000 invited to New York Fashion Week in February 2020, the world was her oyster.

She had already received several Readers’ Choice awards from The Daily Sun, and her designs were getting noticed by a domestic and international audience.

In New York, “I got a lot of media attention, a lot of publicity, and a lot of editorials (written about me).” She accepted numerous appointments for her bridal designs bearing her brand — Lily Rivera. But while in New York, “the first case of COVID showed up,” she said.

“I came back to canceled appointments,” Rivera said. To make matters worse, she had already given up her former space and was without a “home” for her business.

“I was working out of my garage, doing deliveries, and making face masks, but I didn’t give up,” she said.

Because of the shutdown, many office spaces were left vacant. That’s when her luck turned the corner; Rivera found a 2,000-square-foot office space at 2511 Vasco Street in Punta Gorda, and she said the rent was unbelievably inexpensive compared to what she would have had to pay in Miami or Fort Lauderdale, for instance.

Rivera just returned from Puerto Rico where she hired several seamstresses who will sew together the pieces she sends, then return them to Rivera for her hand-stitching embellishments such as lace, pearls, crystals, etc.

Sometimes her 5-year-old daughter Isabelle is brought by to hang out with Mom as she prepares for the next season’s designs.

The Italian magazine Faddy featured one of her gowns, and a TV reality star has just ordered an exclusive Lily Rivera creation.

Rivera said Punta Gorda has offered her the opportunity to make her business grow. She showed The Daily Sun sketches for her new collection called, appropriately, “The World is My Oyster.”

Locally, Lily Rivera bridals can be purchased at Jeannine Bridal in Fort Myers; for a customized gown, customers can order from Lily Rivera directly.

Apparently, research firms have taken notice; suddenly the greater Charlotte County area has appeared on their radar, such as SmartAsset, a financial technology company that analyzed data to determine the best counties for small business owners.

Charlotte County came in 30 out of the 67 Florida counties, but other think tanks and research studies have put the county closer to the top in their surveys and research, including the Heartland Forward study which based analytics on the share of employment by small firms and the number of college-educated employees in those firms.

Dave Gammon, director of the Charlotte County Economic Development Office (EDO), when told the end of January about the SmartAsset data and Forbes article, said the EDO is in the midst of campaigns to bring more entrepreneurial businesses to Charlotte County, he said.

In early February his office began to target businesses on LinkedIn through a direct mail campaign whose eight-page brochure is entitled “Thrive in Paradise.” To complement it, the EDO is directing businesses to its website, LocateToParadise.com.

Saying Charlotte County wants to make the move here “as seamless as possible,” Gammon said the EDO assists businesses in registering with the state, provides tax information, and introduces them to accountants and attorneys. The EDO also offers three-month trial memberships in the area’s chambers of commerce.

Sarasota County made the top ten in SmartAsset’s analysis, coming in at #9.

Destin Wells, vice president of Sarasota County’s Economic Development Corporation, said his office has been putting “more emphasis behind the smaller communities of home-growns.” He cited success stories of startups in the county that went on to achieve national and international success, such as Voalte, a healthcare technology firm, Lumos Diagnostics — a high-tech firm known for the Cov-ID rapid test, and S-One Holdings Corporation which now owns a number of subsidiaries.

Both counties’ economic development offices are targeting small — and large — businesses to come to an area of sunshine and outdoor recreational activities beside the lower cost of living index and lower taxes plus business incentives.

Perhaps this snowy and unseasonably cold winter will provide the impetus for more businesses to decide to relocate to our area.

How do we rank?