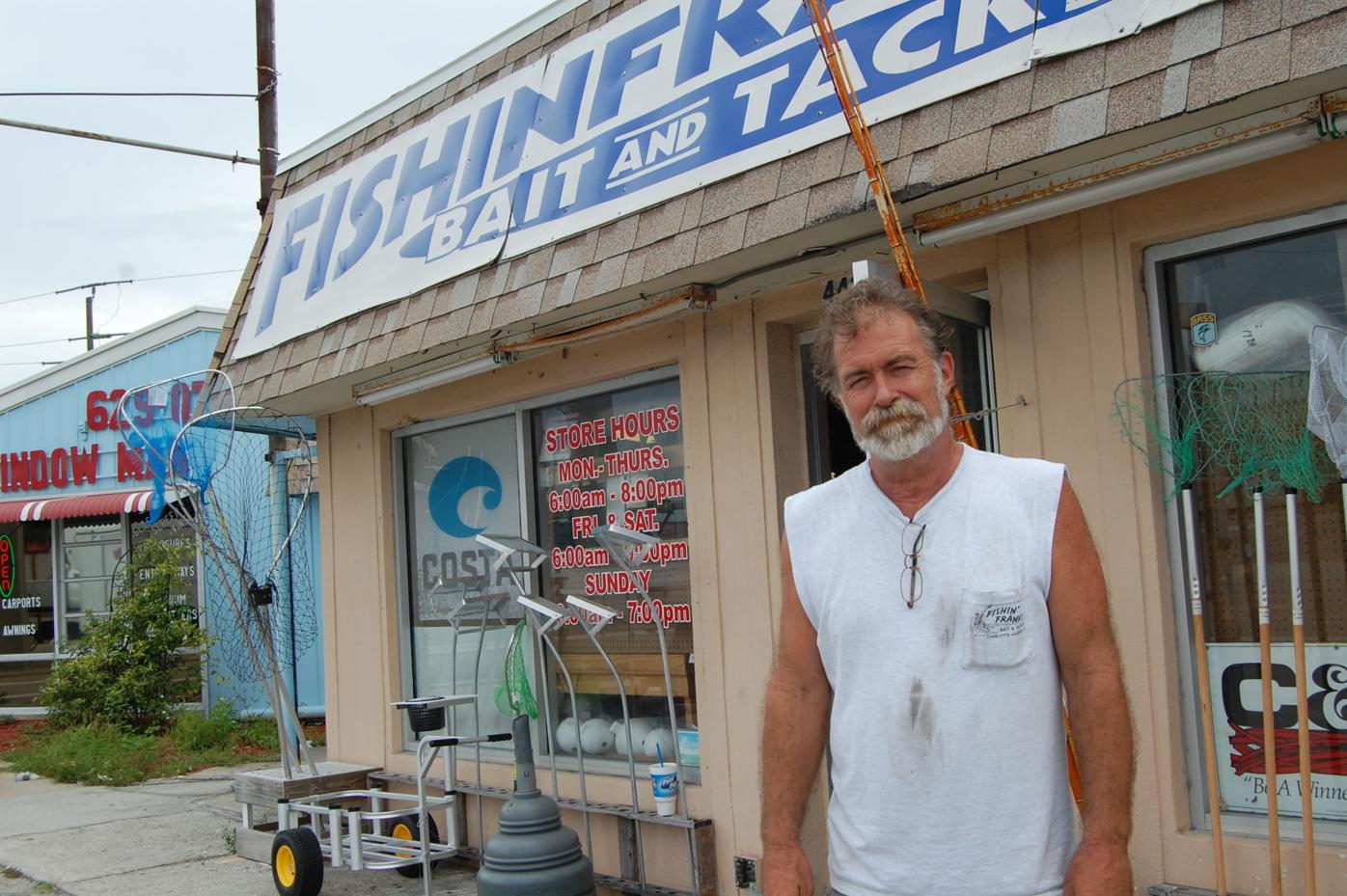 Frank Hommema stands in front of Fishin’ Frank’s in 2013. 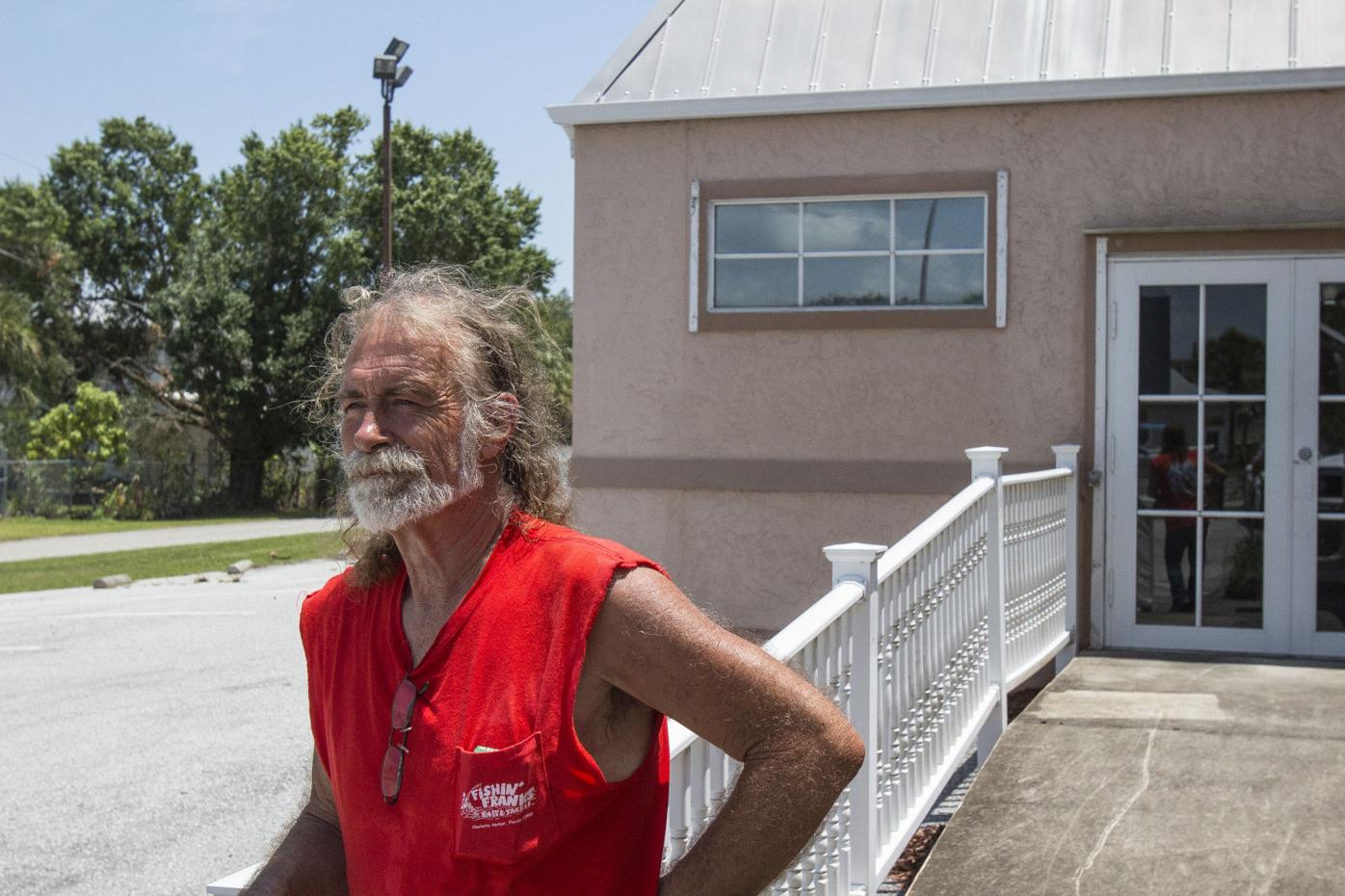 Frank Hommema stands outside a building he hoped would be the new home of Fishin’ Frank’s Bait & Tackle. However, with Hommema still waiting for insurance money, the deal fell through. 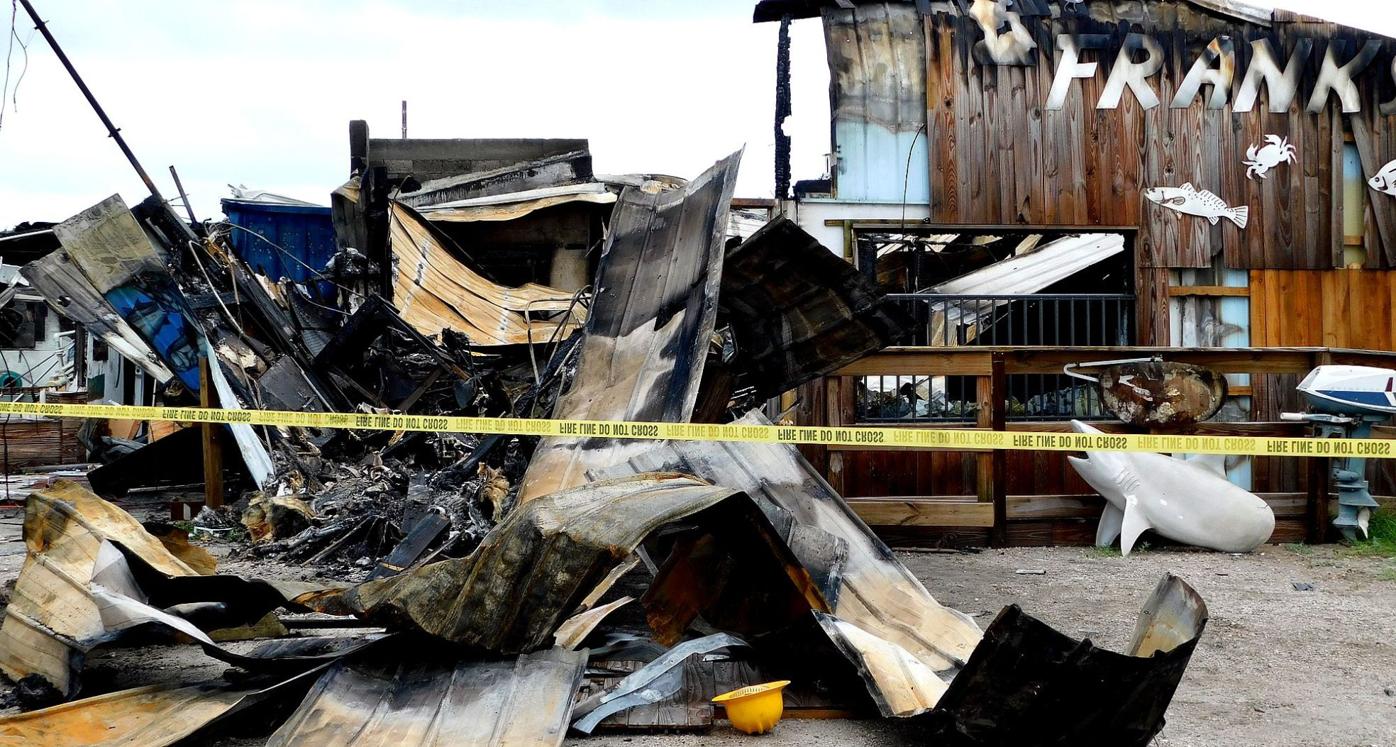 This shows Fishin’ Frank’s along Edgewater Drive in Charlotte Harbor after a fire, caused by a pickup truck crashing and landing on top of the building, destroying the bait and tackle shop. 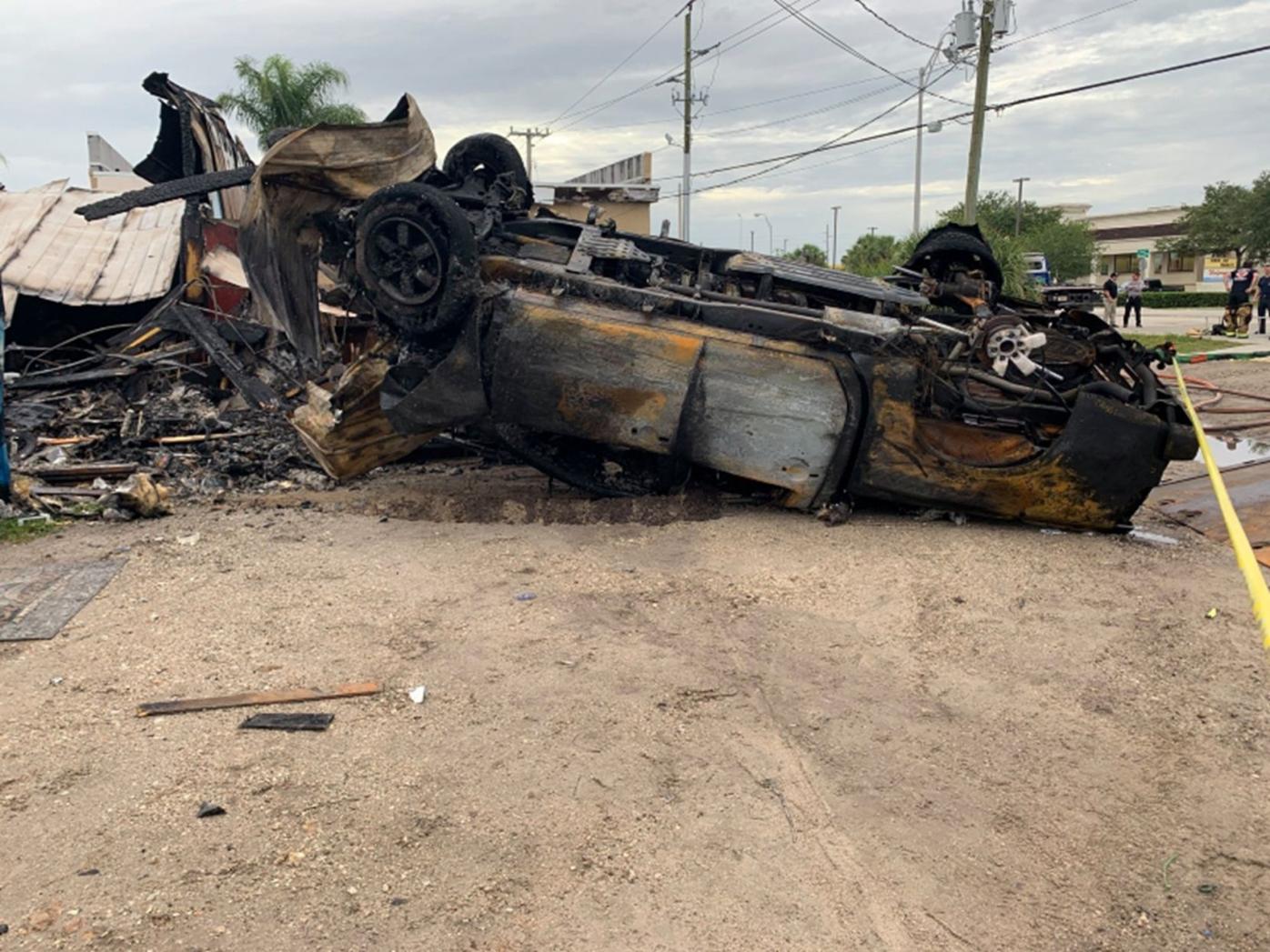 Charlotte County Sheriff’s deputies were honored for rescuing the driver of this pickup, which crashed into Fishin’ Frank’s Bait & Tackle in Port Charlotte. The popular fishing store was destroyed in the fire. 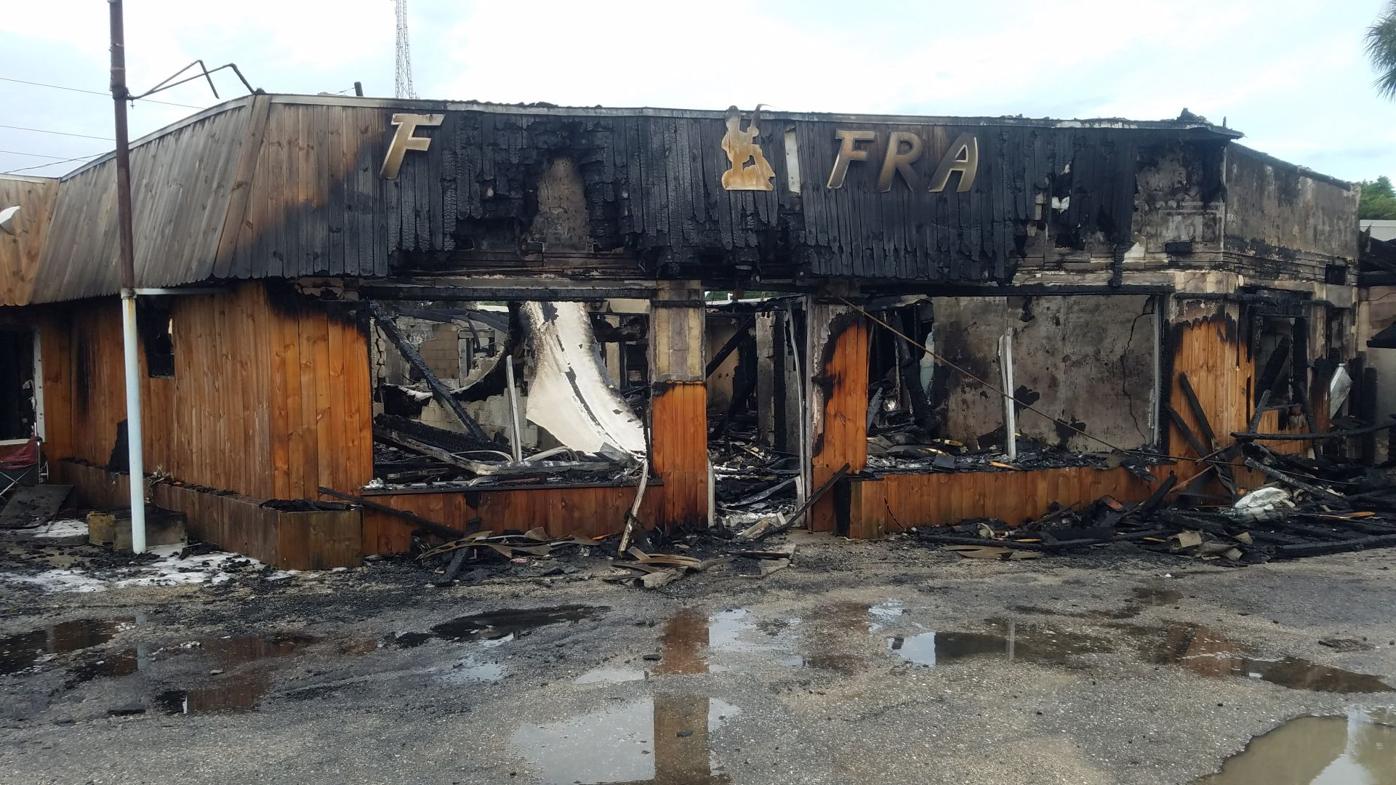 Fishin’ Franks Bait and Tackle on the corner of U.S. 41 and Edgewater Drive in Port Charlotte caught fire and burnt down after a truck crashed onto the building. 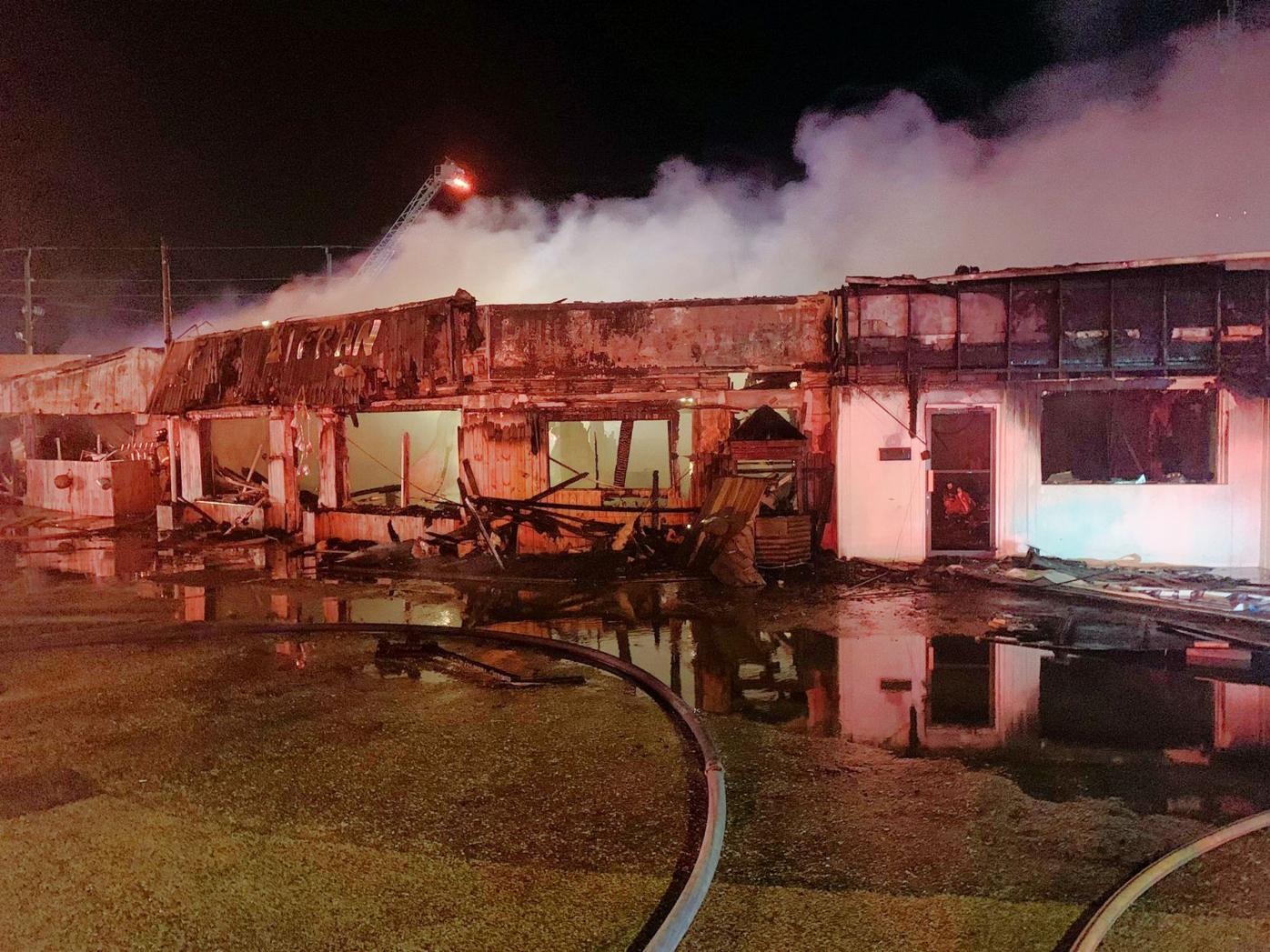 Firefighters battle a blaze that destroyed Fishin’ Frank’s Bait and Tackle on U.S. 41 in Punta Gorda the morning of May 24.

Frank Hommema stands in front of Fishin’ Frank’s in 2013.

Frank Hommema stands outside a building he hoped would be the new home of Fishin’ Frank’s Bait & Tackle. However, with Hommema still waiting for insurance money, the deal fell through.

This shows Fishin’ Frank’s along Edgewater Drive in Charlotte Harbor after a fire, caused by a pickup truck crashing and landing on top of the building, destroying the bait and tackle shop.

Charlotte County Sheriff’s deputies were honored for rescuing the driver of this pickup, which crashed into Fishin’ Frank’s Bait & Tackle in Port Charlotte. The popular fishing store was destroyed in the fire.

Fishin’ Franks Bait and Tackle on the corner of U.S. 41 and Edgewater Drive in Port Charlotte caught fire and burnt down after a truck crashed onto the building.

Firefighters battle a blaze that destroyed Fishin’ Frank’s Bait and Tackle on U.S. 41 in Punta Gorda the morning of May 24.

Southwest Florida is a fishing community, and there are many places to buy bait and tackle. In the Charlotte Harbor area alone, there are a dozen or so dedicated shops, plus a bunch of big box stores and more than a few gas stations with a tackle aisle or bait freezer.

But for a lot of local anglers, there was only one place to go: Fishin’ Frank’s.

For 46 years, Frank’s sat at the corner of Edgewater Drive and U.S. 41. Originally run by Frank Hommema Sr., son Frank Jr. took it over after the first decade. The shop had generations of customers, too — people who remembered going as kids and later brought their own children, and even grandkids.

Early on the morning of May 24, the driver of a pickup on U.S. 41 reportedly hit a concrete curb at high speed, launching into the air and landing overturned on the roof of Fishin’ Frank’s, igniting a fire that burned the business to the ground.

In just a few hours, nearly a half-century of memories turned to ashes.

Nearly four months later, the future of Fishin’ Frank’s remains murky. Though the community rushed to his aid after the fire, “Fishin’” Frank isn’t sure if or how his business can reopen.

The Sun recently sat down with Fishin’ Frank for a Q&A addressing topics like whether the business will survive and what life is now like now for the bait shop’s “pirate crew.”

Where are you at with plans for reopening?

Well, we’ve won and lost. We had an option to buy a really good building, but because the insurance company hasn’t paid us any money yet, we ended up losing the building. Somebody else came in, willing to pay a little bit more, and I didn’t have financing, so we’re out.

What about the donations you’ve collected?

It’s sitting in the bank, waiting until I figure out what’s going to happen. I may end up using some of it to make payroll. We did finally get money from the GoFundMe accounts, which took forever and was a huge hassle.

What are some of the challenges of relocating?

We’ve also had some locations we looked at where the bait tanks wouldn’t be a problem, but when they found out who we were and realized how much traffic we would bring, they shut us out because they didn’t want the competition for parking spaces. I get that — if we’re taking up all the parking spaces, how can they do business?

What about constructing a building?

Anything’s possible. I mean, it’s highly improbable. At this point, it looks like we’re going to try to find someplace to rent.

Is there any consideration of not opening?

There’s always that possibility. I think about that every day. When a pickup truck launches off the road at 100 miles an hour, lands on your roof and burns your building down, maybe that’s a sign. None of us asked to be here. We’re supposed to be at our jobs, working and having fun — life as normal at Fishin’ Frank’s. And then one day, there is no more Fishin’ Frank’s. There were about 20 people in our little pirate crew. Now here we are, down to six of us left, and I don’t know for how long.

I’ve tried to keep as many employees paid as possible, but payroll insurance ran out after 60 days, so I’ve been paying my staff out of pocket since then. Actually, it’s all been out of pocket, but I guess the insurance company will pay me back.

(Wife) Terry and I — actually, (employees) Robert and Jeff too — we’ve spent over half of our lives at Fishin’ Frank’s. We haven’t known anything else. And now, the truth of the matter is that I don’t have to be at the store all the time. Terry was asking when I had time to go run some errands, and I said we could do it today, or tomorrow, or the next day. For the first time, we’re not held hostage to the bait shop. And I’m old enough now to collect Social Security.

I wake up one day and wish I had a store again. I wake up the next and think, ‘Oh, thank God I don’t have to go to work.’

This is the most questionable time in history. If we were in the middle of World War II, we still would have a better idea of the future. We don’t know what’s going to happen with COVID-19. If somebody comes in and gets sick in the store, I could be sued, and then I’d have to spend thousands of dollars to defend myself in court.

So many people have been pulling for Fishin’ Frank’s to open up again. How do you tell them that it may not happen?

The day of the fire, people asked me if we were going to reopen. I said I didn’t know. Then we had so much support from the community, so I fought my way to making it possible to reopen — trying to find a location, trying to figure out how to make it work. But at every turn I found a roadblock. We don’t know if the gods are going to allow us to open.

For me, the big thing is that this is completely out of my control. I’m just a leaf on a river, getting banged into rocks and snagged on driftwood, but the current keeps flowing on. I don’t have any idea of what’s going to happen. This is the most out of my control my life has been in 34 years.

We lived in a bubble of the 1970s in Fishin’ Frank’s, because that was my favorite decade. It was awesome in the bubble. People were friendly, we had rent we could afford, we could wheel and deal on products. It was a different world when you came in the door. But when you walked outside, it was 2020, and it sucked. And now somebody has burst my bubble, and I’m stuck in 2020 all the time. The safety net is just gone. We knew as long as we had Fishin’ Frank’s we were OK, we were gonna make it through, we’d be all right. But that was ripped away.

Here’s the hardest thing of all. Think about the payroll it took to run that shop. If Terry and I decide to go back in business, we’re not talking about a little mom-and-pop shop that we can just run ourselves with a couple part-timers. We’re talking about employing four to five people full-time, plus a few part-time staff. We have to figure out a way to make money. People want the lowest prices and the best service, and that’s an expensive proposition. Terry and I were keeping on average about one percent of the money that came in. That was our margin. Think about how much we had to sell just to keep things running. We were the largest Rapala dealer on the east coast of the U.S., the number one Star Rods dealer in the world. We were in the top 20 Penn dealers in the country.

We had to have people working. On a slow day, we had 100 people come through. Sometimes 500 on busy days. It takes a lot of help, especially when you figure that sometimes you might spend 30 minutes or an hour with one customer who has a lot of questions or needs to learn how to tie a knot or set up a rig. Teaching takes time. Even if they just want to know where the fish are biting — well, you need at least two people behind the counter, or somebody ends up having to wait.

Do you think it would be possible to start over smaller?

It’s hard to find people to work for nothing. If I went in there by myself, I don’t need to make much money. I could work all day and take home a fair paycheck for myself. But I can’t work every day anymore, so I add Robert and Jeff to the mix, and now I’ve got to pay them. Terry has to do the books, and she deserves something for that. With as much merchandise as we have to move to cover all those salaries, now I need an inventory person, and she has to be paid too. Who do I eliminate?

We didn’t run the store for profit. We ran it so we could have a place to go where we could hide from the world and enjoy our lives. We figured that’s what we would always do.

The fire was so different from Hurricane Charley. We lost everything in the hurricane and had to start over from scratch. Really, all we had left was the bait tanks and pumps, and we only had a $25,000 insurance policy. But we had a place to start, and we were 15 years younger. Now, to start all over at my age, somewhere that’s going to cost me twice as much and has less space? I don’t know.

What’s the bottom line here? Is Fishin’ Frank’s coming back?

All I can tell you is there’s no bad news here, but there’s no good news either. We want to reopen, at least on some days. Is it going to happen? I don’t know. My crystal ball has a great big crack in it, and my Magic 8-Ball burned up in the fire.