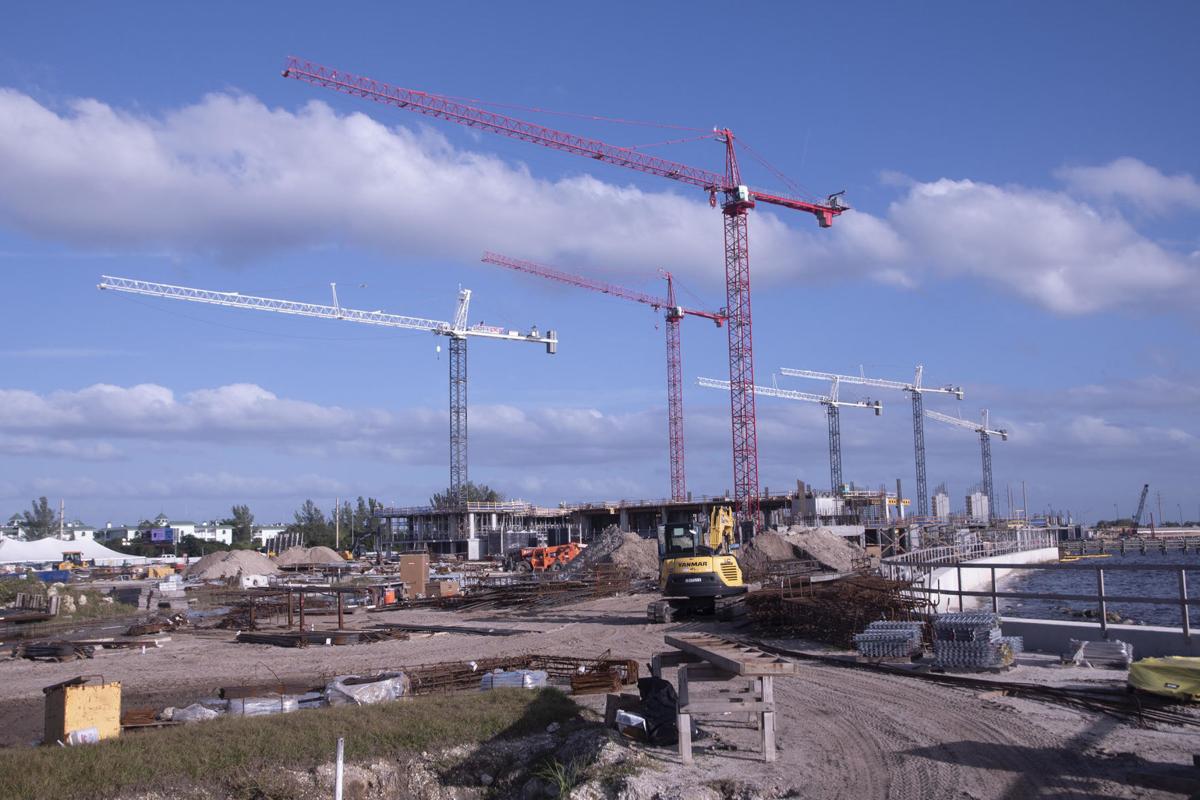 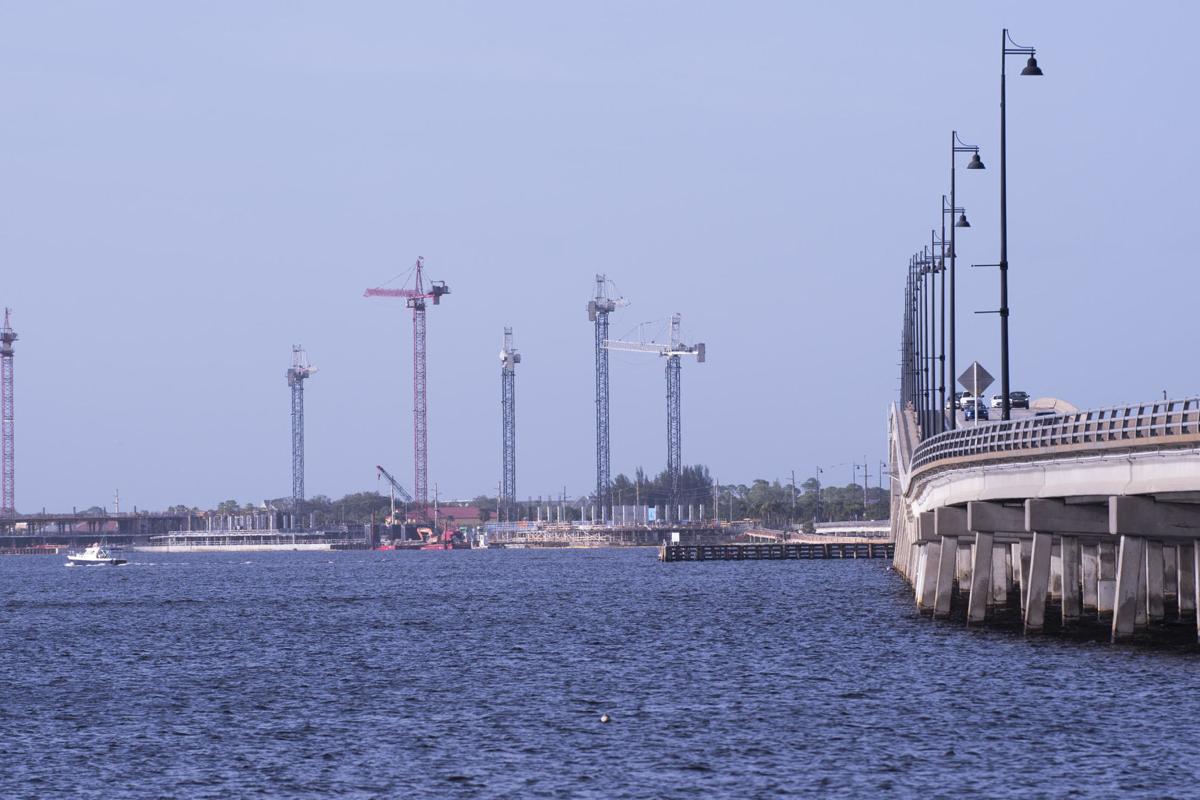 As motorists travel on the bridge leading to Punta Gorda, tall cranes are seen along their route Jan. 10. 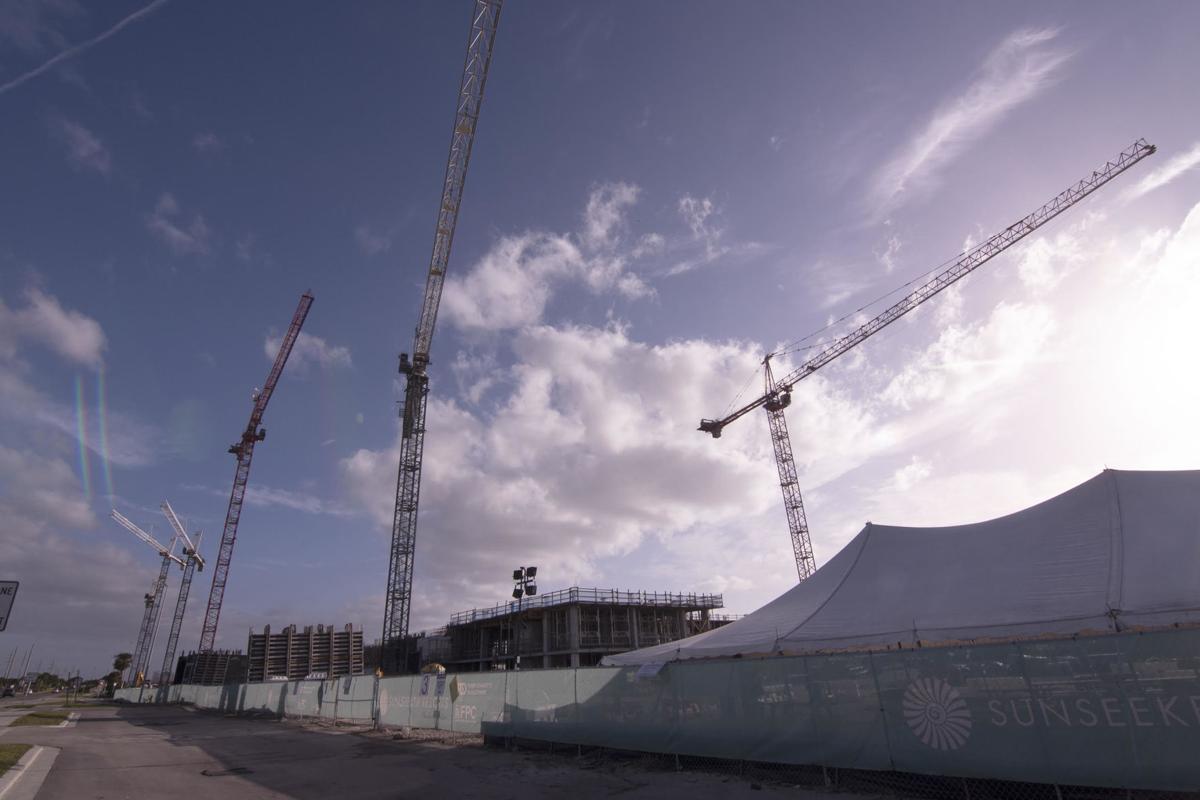 Cranes located at the Sunseeker Resort development along Charlotte Harbor reach high into the sky along Tamiami Trail Jan. 10.

As motorists travel on the bridge leading to Punta Gorda, tall cranes are seen along their route Jan. 10.

Cranes located at the Sunseeker Resort development along Charlotte Harbor reach high into the sky along Tamiami Trail Jan. 10.

The biggest symbol of progress on the Sunseeker resort is coming down in the next few weeks.

The news of the cranes of Charlotte Harbor comes as Allegiant announced at least 18 months of no further cash investment at the flagship resort. It is a resort that distinguishes Allegiant from other airlines.

Financial distance from Sunseeker is part of the company’s coronavirus pandemic strategy to go back to being just an airline.

“We have said from the outset, the most important component of our model is the airline,” Allegiant President John Redmond said in last week’s first quarter shareholder conference call.

Redmond, whose background is in Las Vegas resorts, was hired to expand the company beyond an airline. He envisioned the Sunseeker project, which now sits in suspension on Charlotte Harbor, giant cranes idled by the pandemic’s crushing impact on airline travel.

Allegiant’s first quarter statement also hints at a “strategic partnership,” for Sunseeker. Any partner would be looking at phase one buildings under construction for a year now. The first phase is designed to hold 783 rooms and suites along with conference space, a parking garage and a rooftop pool. A site plan for the next phase with a bigger pool, restaurants and retail, and a half-mile waterfront walkway, sits approved but in limbo in the Charlotte County permit website.

Allegiant executives declined to discuss what a partnership might be.

“It’s shut down. It’s not what we’re doing,” Chairman Maury Gallagher said in answer to questions from a Goldman Sachs analyst, Catie O’Brien. She had asked whether a future partnership would keep the planned ties to Allegiant’s passenger service to Southwest Florida, which was the unique marketing aspect of Sunseeker.

“We’ve got to do something, eventually, but like I said, that’s moons ahead of us,” Gallagher said.

Investor analyst questions started with Sunseeker, which Allegiant is calling a $137 million impairment in accounting speak.

“Is there any sort of cost associated with it over the next 18 months,” asked Mike Linenberg of Deutsche Bank.

“There’s no debt that we’ve drawn on that,” Chief Financial Officer Greg Anderson answered. Allegiant said before the project started that it would pay for the project out of operating revenues. In 2019, it partnered with an investment firm for an initial $175 million in construction financing.

“There is some outstanding payables that we’ve committed to before stepping down, that we’re bleeding out over the next few months … That’s built into our cash burn number.”

What is the cash burn?

For the second and third fiscal quarter, Anderson told investors the company projects $2.1 million and $1.5 million a day respectively. By the fourth quarter, it could be down to less than $1 million a day, he said.

Those numbers are built on an assumption that the airline makes on average of $750,000 a day in bookings, he said. That number went down to $250,000 a day at the airline’s lowest point, Anderson said, but they are seeing improvements.

By comparison, Anderson said, the airline was making $5.5 million a day in bookings in 2019.

How will Allegiant deal with losing that much money every day?

Shutting down Sunseeker was the first step. Another step is to park 25 of its planes, with the possibility of retiring some in the future, Gallagher said.

A big contribution is coming from the American taxpayer in the form of $650 million available to Allegiant through Coronavirus Aid and Economic Recovery Act. The first $172 million is for payroll assistance. Another big chunk, $194 million, will come in tax write-offs going back five years. The rest is in loans. In exchange for taxpayer funds, Allegiant and all major airlines have agreed to maintain minimum travel routes and staffing as well as to executive paycuts and suspending stock dividends.

Despite the financial trauma, airline executives voiced optimism for their company compared to other airlines. That’s because Gallagher sees leisure traveling as recovering sooner than business and international travel. Gallagher said he wonders if business travel will ever return to pre-pandemic levels.

But leisure — Allegiant’s entire market — will bounce back, Gallagher said, starting with people he described as “ready to rumble.” Those are the 40-50% of Allegiant customers, if not the general public, who are itching to get out again.

“We, as an airline, have to be able to cope with this level of uncertainty, be able to rightsize ourselves to service those 40 or 50 looking to rumble in the coming months, and hopefully, see the remaining 50 return later this year, and in 2021. In my opinion, we have the ability to size ourselves better than any other carrier.”

County government would not comment on whether the county is working with Allegiant to find a strategic partner for Sunseeker, nor would Allegiant. As for the construction site, the county’s obligation is for inspections of things like electrical or plumbing work, spokesman Brian Gleason said. For site safety, project operations are governed by the U.S. Occupational Safety and Health Administration, he said.

Economic Development Director Dave Gammon said recently that he wouldn’t start to worry until the cranes came down.

Despite this latest development, Gammon told the Sun he doesn’t think Allegiant is abandoning Sunseeker.

“While we are still in the woods, the sunlight is shining through a bit more each day.”