This spot along the Myakkahatchee Creek in North Port is where city police on Tuesday found evidence of possible illegal artifact collecting.

Holes along the creek bed indicate a possible artifact hunter, an illegal practice in Florida. 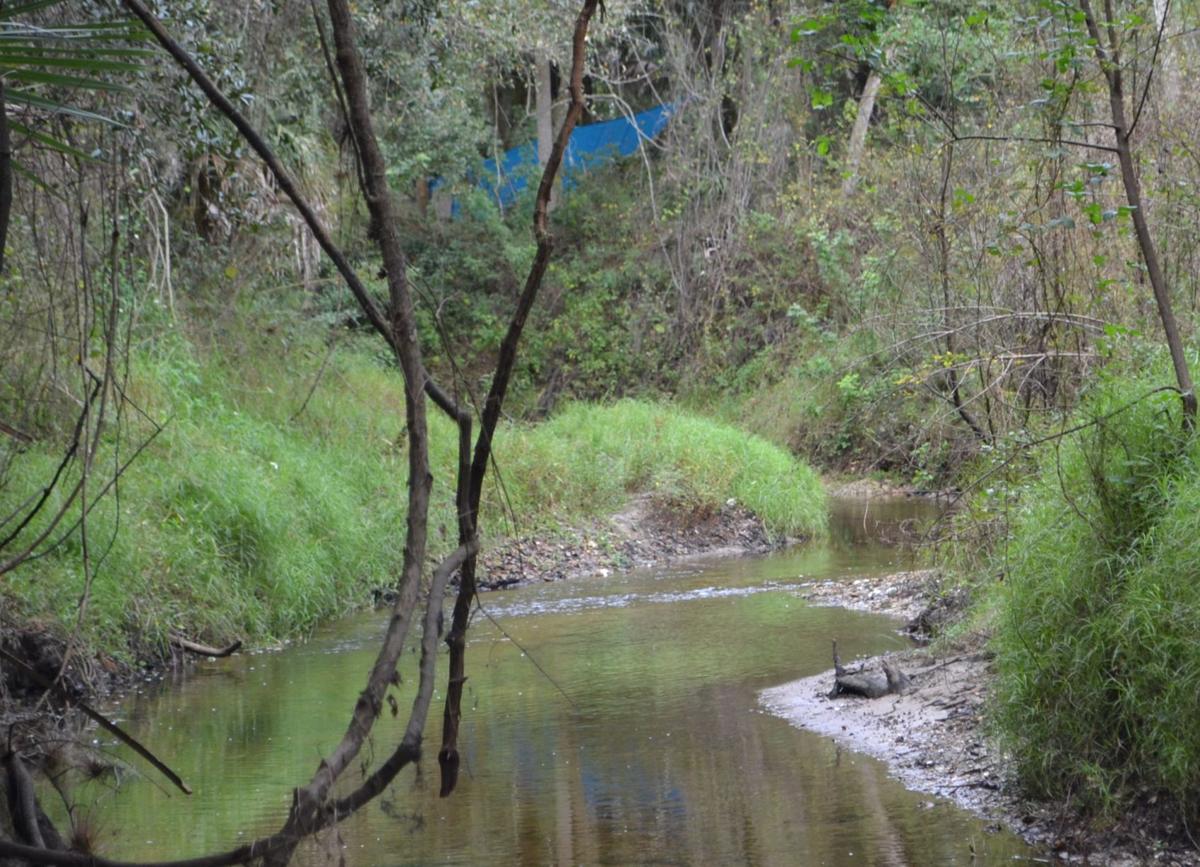 A blue tarp (distant background) may have sheltered illegal looters. North Port police are turning the investigation over to the Florida Fish & Wildlife Conservation Commission.

This spot along the Myakkahatchee Creek in North Port is where city police on Tuesday found evidence of possible illegal artifact collecting.

Holes along the creek bed indicate a possible artifact hunter, an illegal practice in Florida.

A blue tarp (distant background) may have sheltered illegal looters. North Port police are turning the investigation over to the Florida Fish & Wildlife Conservation Commission.

A foot or so deep and squared, a dozen of them pockmark a small section of the Myakkahatchee Creek in North Port.

That they're squared and at a certain depth below ground surface suggests illegal looting of human artifacts, according to experts in the trade or those hunting crooked ones. But who did the digging and what exactly was going on remains a mystery.

And since the Myakkahatchee Creek is under Florida's jurisdiction, it may be some time, if ever, that authorities unravel exactly who dug those holes.

Officers did find a North Port man sifting the creek for fossils, which under state law is allowable. That man, Don Rivette, was questioned and produced a state permit to collect fossils, police said. Rivette is active in North Port historical committees and owns Earth Treasures in Venice, which sells fossils, shells, minerals and “wonderous gifts our planet has created,” according to the firm's website.

Rivette is upset at getting drawn into the circle of circumstances.

“We are very careful and ethically sourced,” he said of items marketed at Earth Treasures, noting that he regularly fossil hunts along the Myakkahatchee Creek and was doing so with his brother on Tuesday. Investigating officers confirmed this in a summary of what was observed.

But the city has moved on the matter, forwarding a report about the holes and concerns about looters to the Florida Fish & Wildlife Conservation Commission, which has sovereignty over waterways.

“Our staff,” said Josh Taylor, North Port's communications manager, “is currently sending all photos and info to those with the state who have oversight of this waterway and those who have issued any sort of permit associated with this activity.”

Like stamps or shells or sports cards, fossil collecting will begin sometimes as a hobby, sometimes in childhood.

Those in it are deeply passionate.

In Florida, fossil-collecting tours to such places as Peace River in central counties bring amateurs from around the world. They come in batches in khaki and rubber boots with their scoopers.

Shark's teeth along stretches of Peace River are like pennies in a wishing well, for instance, nearly everywhere you look. That's because the state was once covered in sea water; it is blanketed in fossilized bones, plants, trees and animal parts.

A few are very valuable. A good shark's tooth or dinosaur bone will get the lucky hunter yelping for joy, said John Hammond, an Orlando fossil collector.

"Like finding gold," he said. "Exactly the same thing."

But it's what our ancestors left behind that draws a different crowd, however. Tomb raiders and grave robbers and other illicit looters date back centuries. In America, they loot Native American lands, some of the haul ending up in museums. The take from a 2009 police raid in Utah, for instance, included more than 5,000 artifacts from one home.

Investigators cataloged some 40,000 objects — a collection filling a Salt Lake City warehouse and parts of the Natural History Museum of Utah. Legal limitations on removing artifacts from public and tribal (but not private) lands date to the Antiquities Act of 1906.

Collecting human artifacts more than 50 years old has been illegal in Florida since 2005. An authentic and vetted early Florida arrowhead will bring more than $1,000, for example.

Looting of mostly Native American artifacts is so lucrative that Florida Fish & Wildlife agents in 2014 conducted a sting to nail alleged perpetrators.

Agents in Operation Timucua raided homes in Florida and Georgia and charged 14 people with more than 400 felonies. The idea was to stop the buying and selling of human artifacts, which is what may have been happening in North Port this week.

The squared holes are like a calling card, experts insist. Looters dig at precise depths to match dates of inhabitants in certain regions, said Hammond, the Orlando fossil collector with 50 years into his hobby. He owns Paleo Enterprises, a web-based business selling and trading fossils and some man-made artifacts. Those items he lists predate or "grandfather" Florida laws prohibiting such sales, he insisted.

Selling and trading of legal artifacts is a huge enterprise, he said. It's the looters that give honest collectors night sweats.

“And that's illegal as hell,” he said of such scouring of Florida waterways and Native American gravesites. “There's no real money in fossils; they're looking for arrowheads or tools.”

While the scope of Operation Timucua may have exceeded $2 million in recoverable artifacts, whether looters got anything in North Port, or what it could have been remains a mystery.

They left just the holes along Myakkahatchee Creek that identify possible looters, said Goetz, who reported the circumstances to city commissioners, as well as posting on social media what he observed and photographed on Tuesday.

“I'm concerned (looters) will come back,” said Goetz, a historian and member with the city's Historical and Cultural Advisory Board, along with other roles in Sarasota County. “There is irreparable damage. Honestly, it makes you want to cry.”

In Florida it is illegal to collect vertebrate fossils (excluding shark teeth) without a permit from lands owned by the state.

State lands include the bottoms of navigable waterways like rivers, lakes and some streams. A permit to collect vertebrate fossils on state lands can be obtained through the Florida Museum of Natural History. There is a $5 fee per year, and the permit holder agrees to report their vertebrate fossil finds on a yearly basis. The state has the right to claim any fossils found that are deemed scientifically significant as a condition of issuing the permit. This law applies to both Florida residents and those traveling to the state.

Like shark teeth, invertebrate and plant fossils can be collected without a permit (seashells, echinoids and petrified wood).

Often times, fossil hunters come across human artifacts. The difference between fossils and artifacts is that an artifact represents something that has been shaped or constructed by prehistoric humans while fossils are the remains of ancient life. Sometimes it is difficult to distinguish between the two as prehistoric people occasionally utilized fossils as ornaments and tools.

An example of fossil material that can also be an artifact is agatized coral. Prehistoric Floridians utilized this material to construct projectile points and other tools. If you cannot tell the difference, then it is best to leave the object where it was found. Collecting of human artifacts on state lands is illegal.

Remember, this applies only to state lands; private lands are a different matter. It is not illegal to remove either human artifacts or vertebrate fossils from private land as long as you have the landowner’s permission. However, the collection of artifacts on private land is not allowed if the area contains a human burial.

This is hysteria. If there’s an important site, the professionals would have already studied it. It’s not significant, obviously, but archeologists need a job. Watch them convince government to pay them. That’s what this is about. Citizens, get ready to pay tribute to the archaeologists.