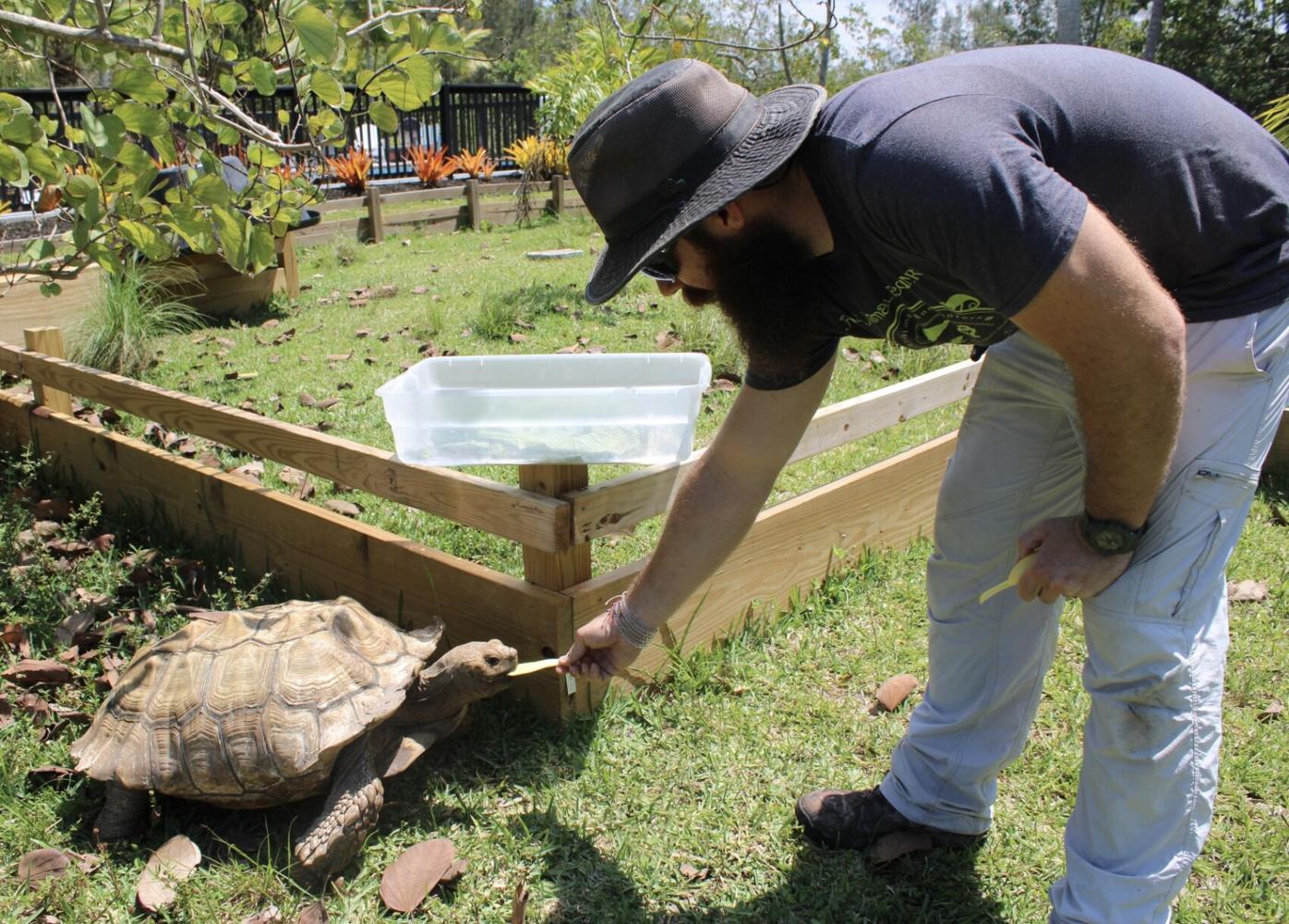 Wildlife biologist Adam Pottruck feeds one of his hundred-pound tortoises. 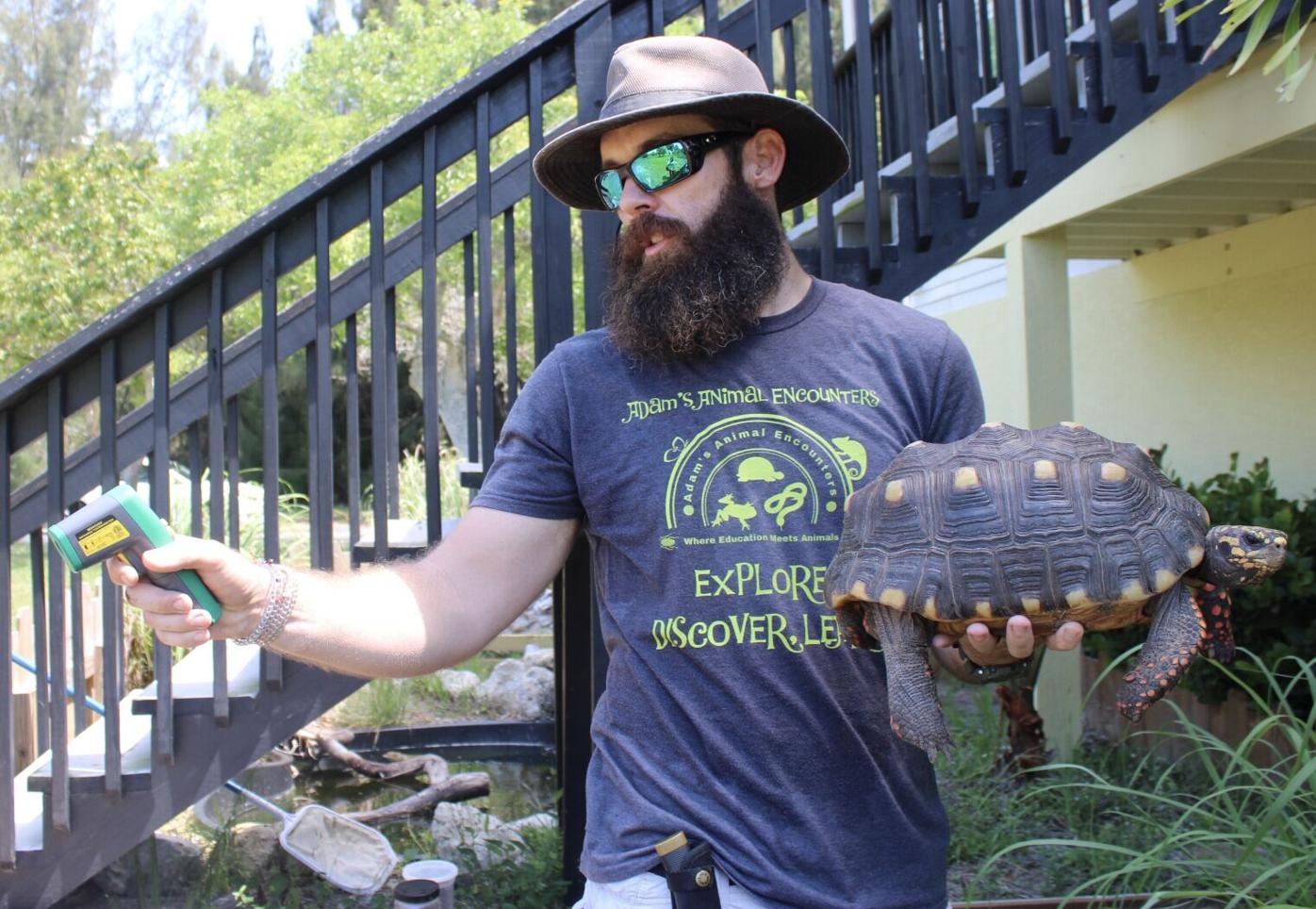 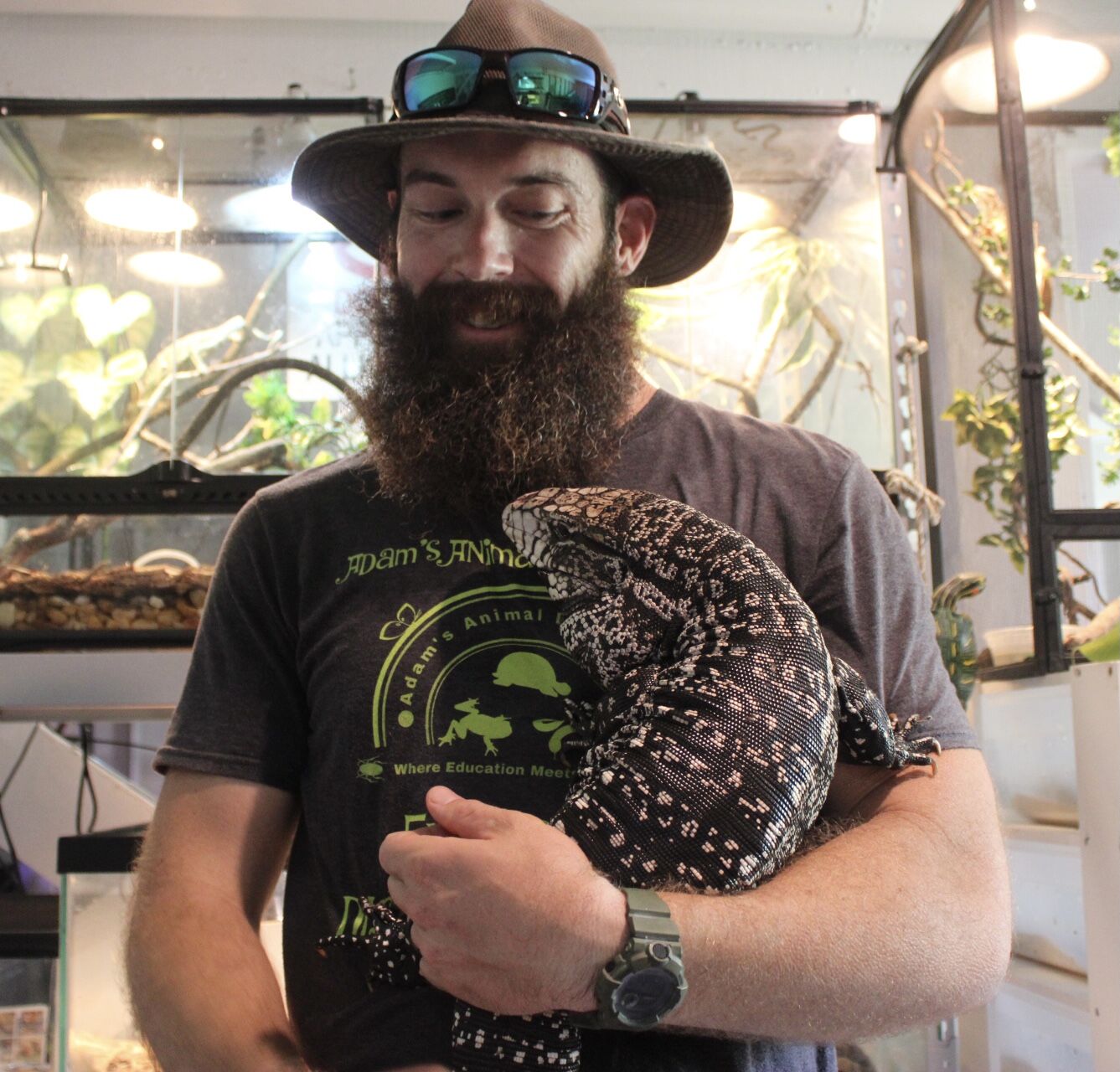 Adam Pottruck and his tegu. 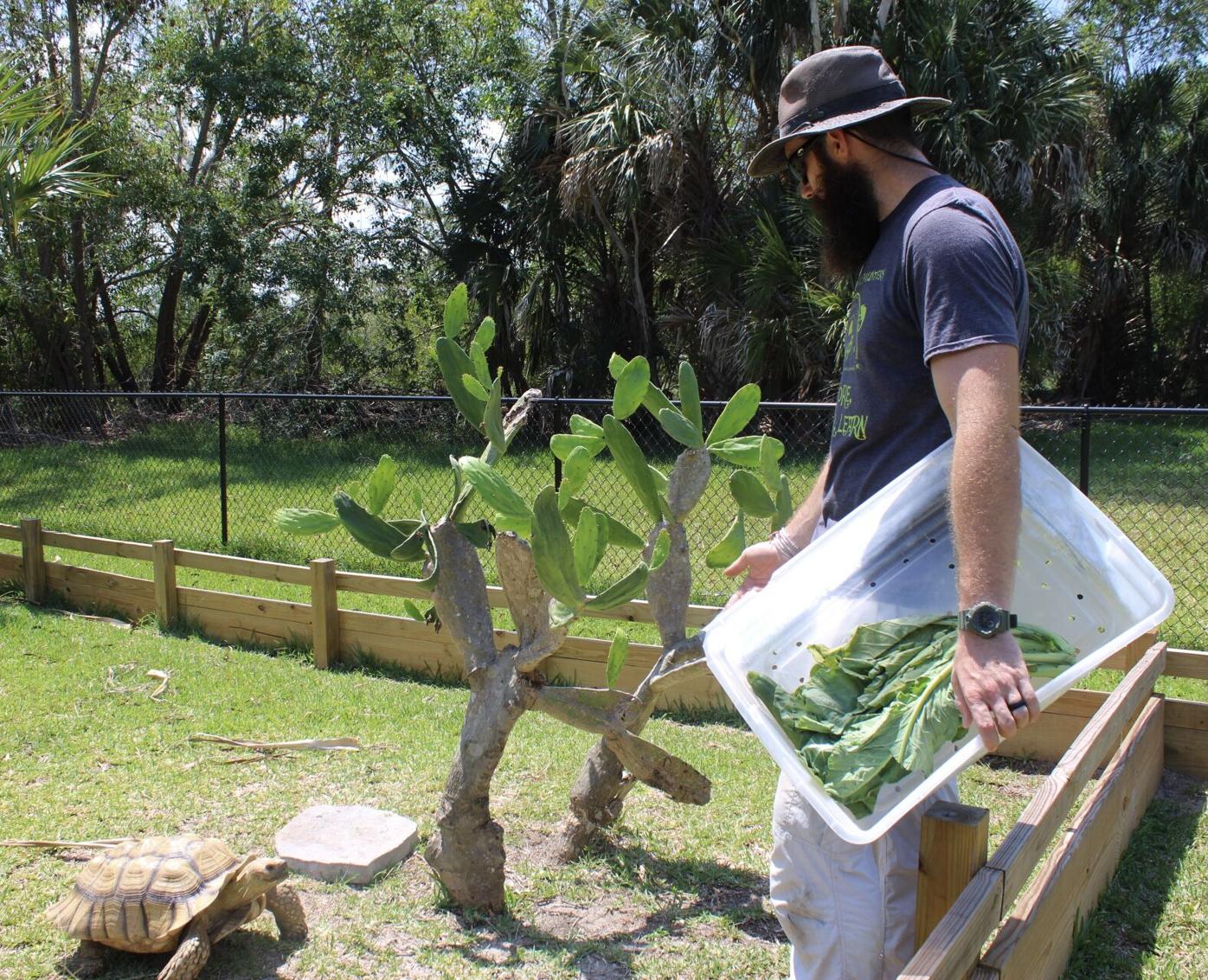 The tortoises have unique taste, especially when it comes to eating prickly pear cactus. 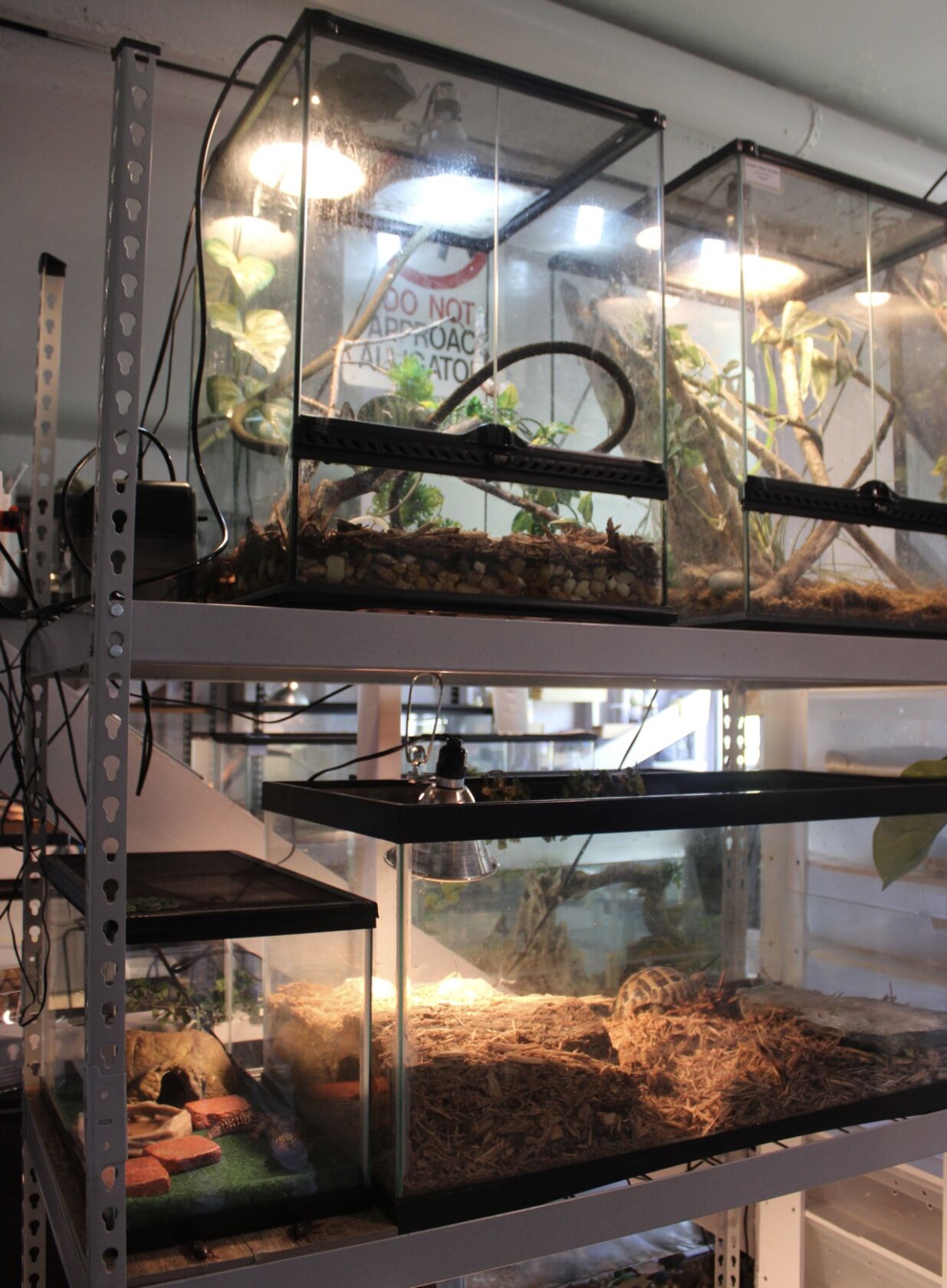 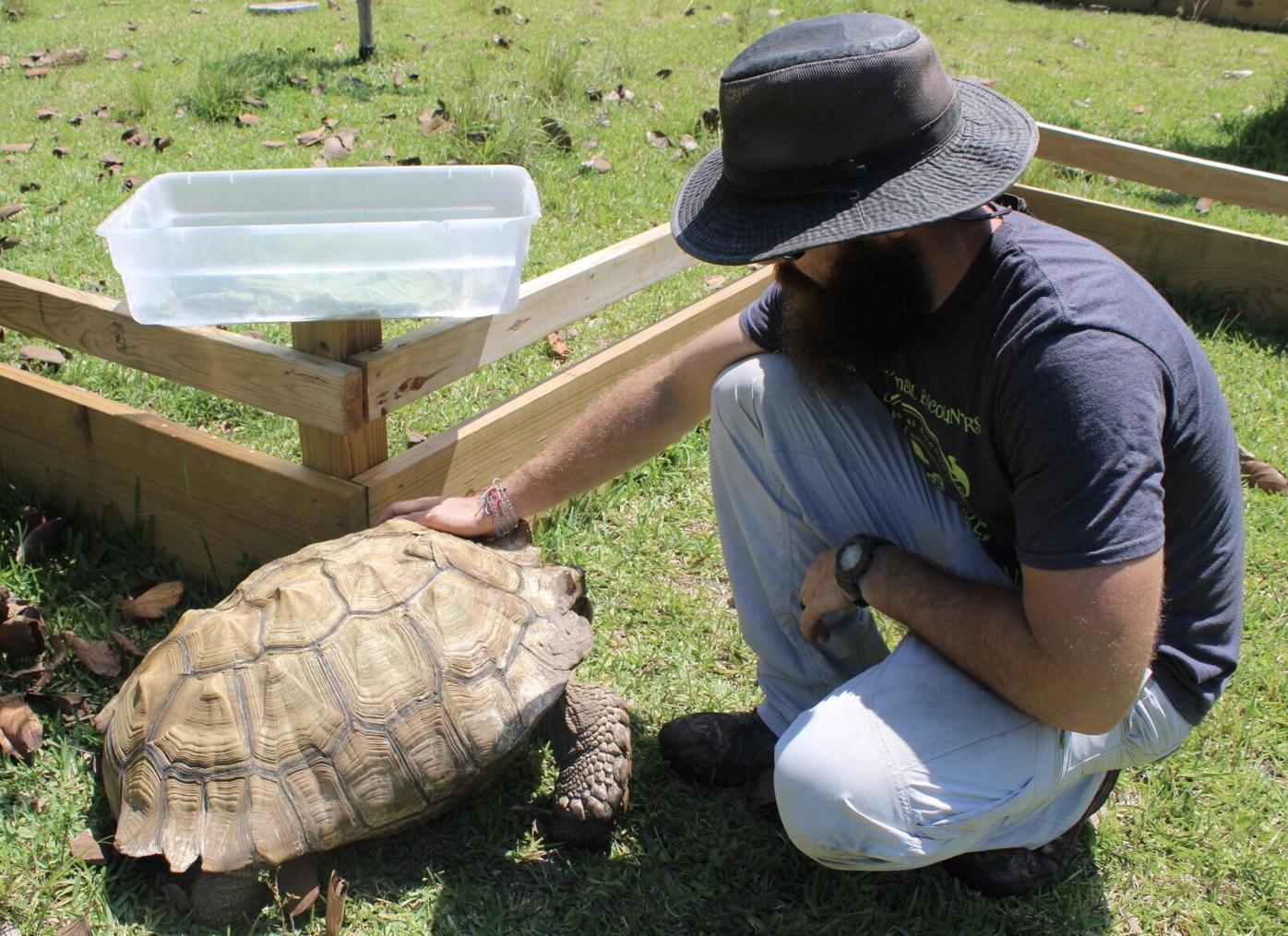 Wildlife Biologist Adam Pottruck feeds one of his hundred-pound tortoises. 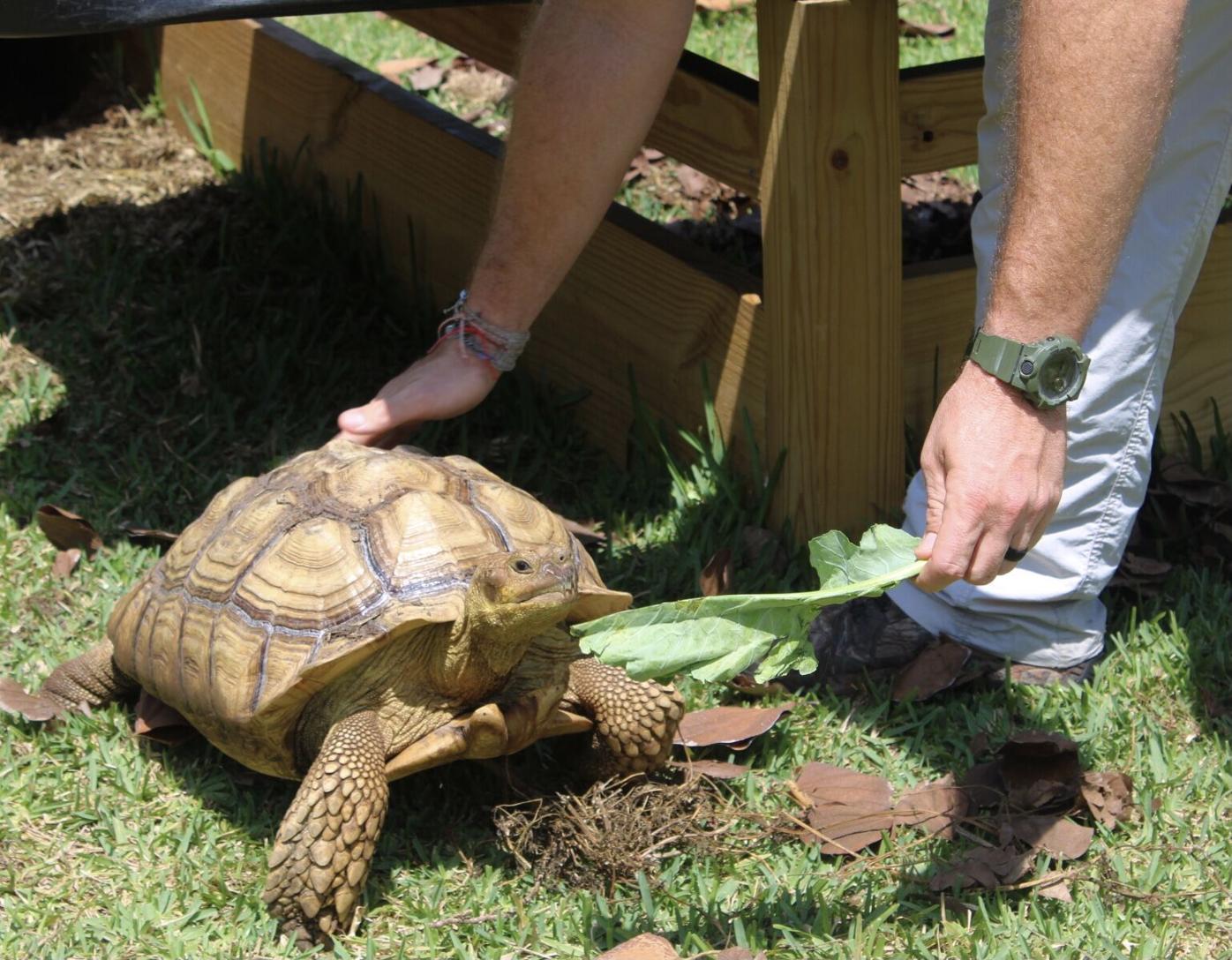 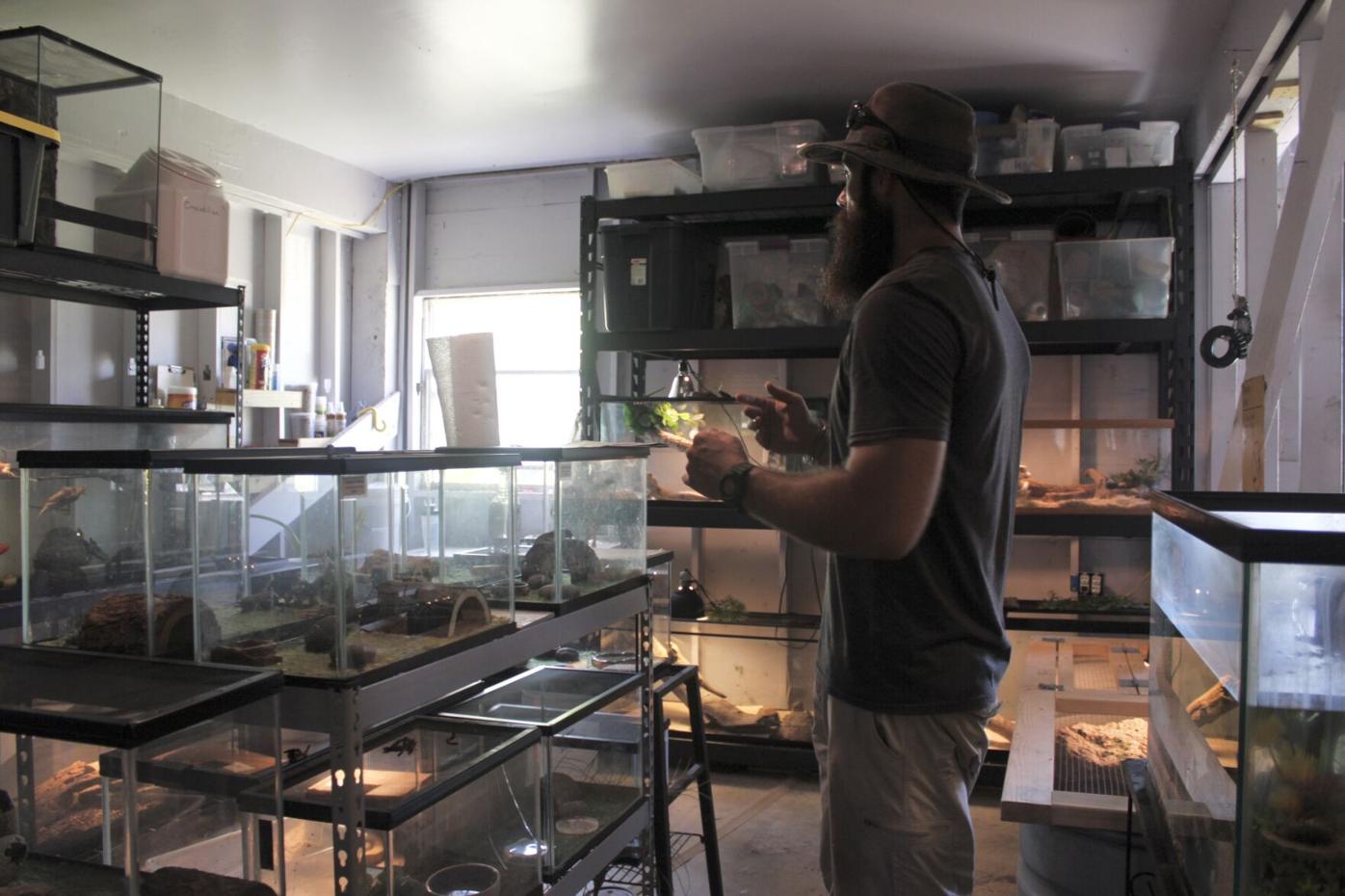 Wildlife biologist Adam Pottruck feeds one of his hundred-pound tortoises.

Adam Pottruck and his tegu.

The tortoises have unique taste, especially when it comes to eating prickly pear cactus.

Wildlife Biologist Adam Pottruck feeds one of his hundred-pound tortoises.

Not only did the pandemic challenge the way educators taught, but it took away lessons that made school special for kids.

Lessons like the ones wildlife biologist Adam Pottruck would teach with snakes, tegus, geckos, tortoises and turtles.

Pottruck, of Adam’s Animal Encounters, has educated students across Southwest Florida by bringing his rescue reptiles to schools since 2018. Prior to his career change, Pottruck taught biology, environmental science, and marine science at a high school in Cape Coral.

The Florida Gulf Coast University graduate operates out of his facility in Bokeelia, but transports his animals across the region to schools in Charlotte, Lee and Collier counties.

Between Title 1 funding for education and his statewide public contractor badge, he has had the ability to work with any school in the state.

But once COVID-19 shut down schools and businesses, Pottruck received more than 100 educational program cancellations.

“I haven’t taught in schools over the past year,” said Pottruck. “Before COVID hit, we were doing three or four days worth of programs every single week, with four programs in a day.”

And because of slow internet, his program couldn’t be done virtually until recently.

“That’s why so many sessions resulted in cancellations,” he said.

Pottruck, however, explained the virtual aspect made teaching unique.

“I can bring a snake within one inch of my video camera and you can see certain characteristics of that snake physically that you would’ve never seen if it was actually there in person,” he said. “I would have never put a snake a couple feet away from a child, let alone an inch from their eyes. Virtual adds a whole other aspect, but, no matter what, being in person is stronger.”

Pottruck reminisced on the days he was able to teach about his passion in-person.

“When I first started, I didn’t know how to talk to the younger kids,” he said. “Preschool and kindergarten teaching took the learning curve.”

To prepare for his lessons, Pottruck read through books designed for different grade levels and watched presentations to cultivate his programs.

“I’ll watch someone stand in front of a kindergarten class with a snake and say, ‘This snake can get to be 20 feet long, and they’re not even supposed to be here, they’re actually from Asia,’” Pottruck laughed. “You could’ve told that kid this thing was going to be 20 miles long and it was from next door, because they don’t understand the concept of countries yet, nor do the understand the difference between a foot or mile.”

Pottruck made his curriculum grade specific.

He teaches kindergarten about the five senses of animals, second grade focuses on survival and habitats, fourth grade learns about animal adaptations, and so on.

With 35 different species of animals including 14 types of ball pythons, six red-eared sliders and 11 leopard geckos, Pottruck explained there are endless lessons to be taught.

“I usually have to read up on this information myself,” he said. “I’m always learning.”

“If you don’t get them interested in something like conservation, they won’t develop that love for it,” he said.

“I feel sad that children have missed out on the hands-on experiences with environmental educators in their communities this year,” she said.

CHEC has worked with Pottruck in recent events to bring animal encounters back for kids.

“These are unforgettable experiences for children,” said Festa. “I hope that we can catch up with the students to give them fun educational experiences in their later years of schooling.”

Pottruck said schools are starting to reach out again.

In addition to his current operations, Pottruck is expanding his facility to incorporate a nonprofit system. This way, he could educate in schools at no cost.

“Fingers crossed things keep going in the right direction,” he said. “I want to continue to show these animals off.”