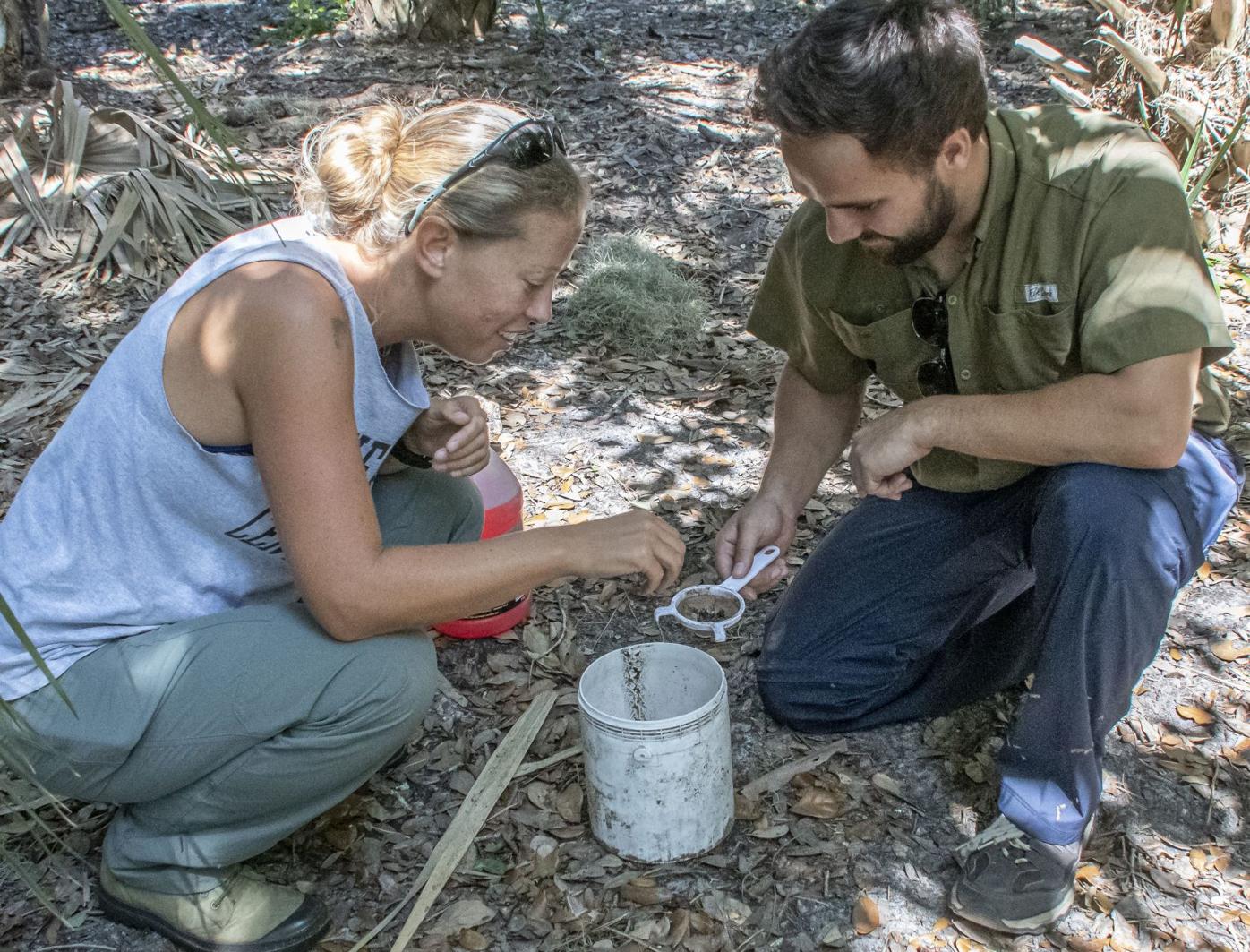 Dr. Roisin Stanbrook and reseach assistant Daniel Bonsignor inspect a dung beetle trap at the Longino Ranch in DeSoto County. Their work is part of a USDA-funded study with the University of Central Florida. Stanbrook leads the research in Florida. 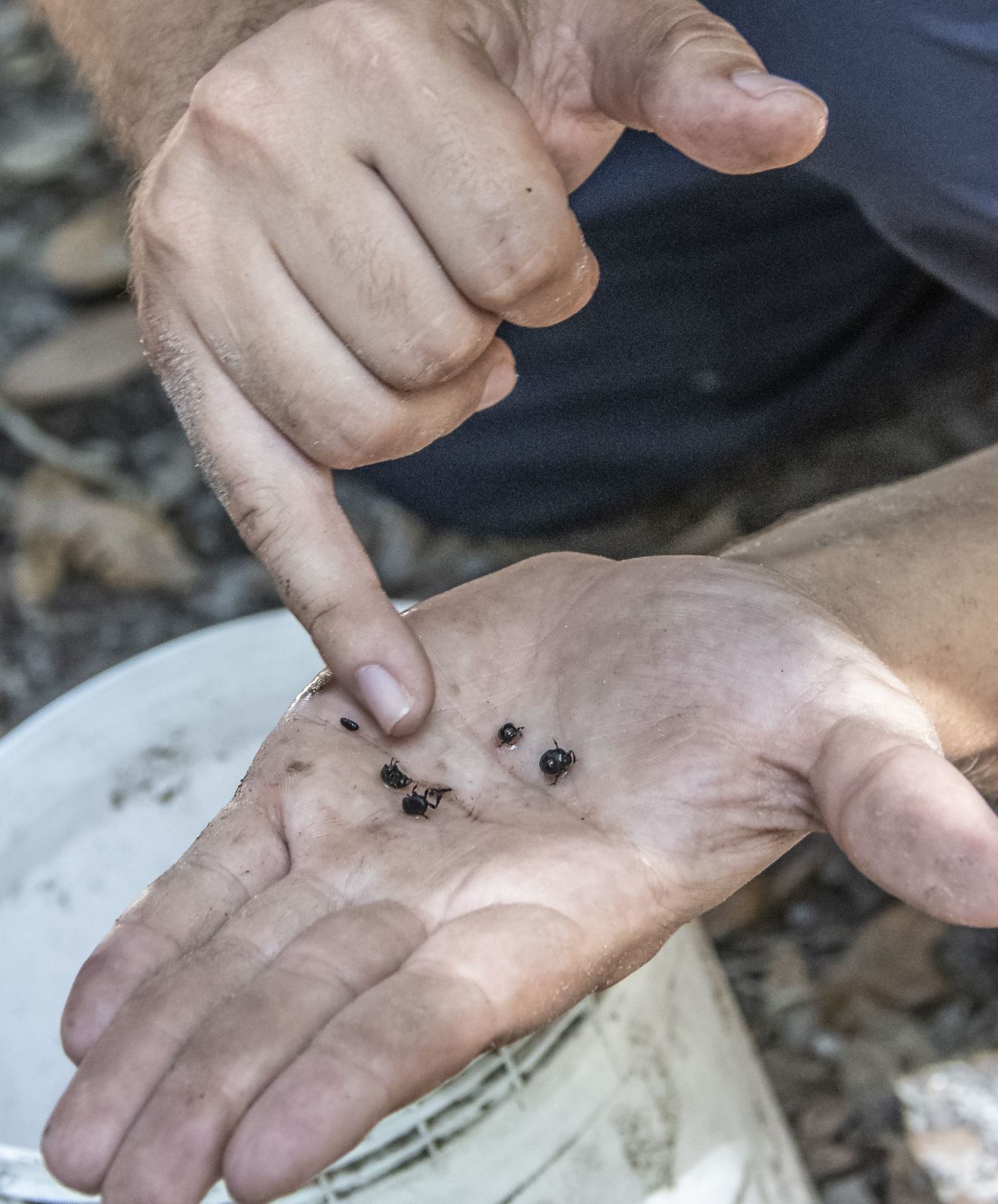 These tiny creatures have a reported value to American farmers of $380 million. 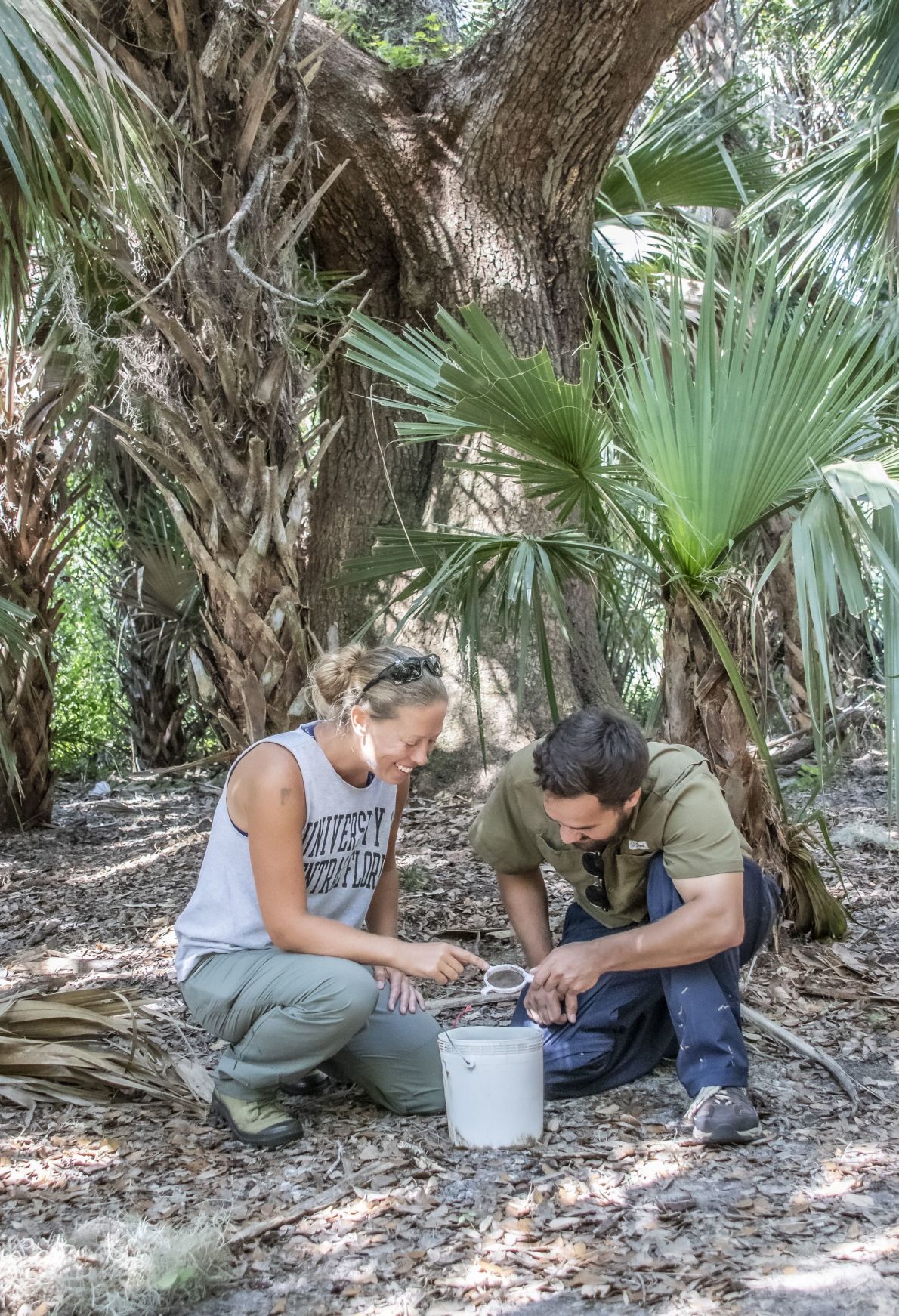 Hammocks are where cows hide from sun and heat, and where they leave calling cards for eager researchers.

Other devices record details on dung beetle habitat and lifestyle.

Dr. Roisin Stanbrook and reseach assistant Daniel Bonsignor inspect a dung beetle trap at the Longino Ranch in DeSoto County. Their work is part of a USDA-funded study with the University of Central Florida. Stanbrook leads the research in Florida.

These tiny creatures have a reported value to American farmers of $380 million.

Hammocks are where cows hide from sun and heat, and where they leave calling cards for eager researchers.

Other devices record details on dung beetle habitat and lifestyle.

In a broad and open pasture, Roisin Stanbrook searches the ground. She stoops in ankle-high grass to dig through mounded cow droppings. The stuff is dry, but it’s still … not something you’d picture as fun.

But for Stanbrook, who goes by Rosie, this is like panning for gold. The university researcher is in DeSoto County to study dung beetles. These important insects are disappearing from Florida pastures and Rosie Stanbrook’s job is figuring out why and to restore the state with species that can endure as the climate seems to get hotter and drier, she said.

Stanbrook and assistant researcher Daniel Bonsignor have been invited to the huge Longino Ranch that straddles DeSoto and Sarasota counties, there to study dung beetles. The two are with the University of Central Florida’s biology department. Stanbrook is a post-doctoral fellow leading USDA-funded research. Dung beetles renourish the soil with livestock droppings, rid pastures of worms and flies that flourish in cow poop, and perform other miracles reducing ranching costs. They also raise their youngsters in cozy balls of buried cow droppings, presenting them a heated lunch at birth.

For unexplained reasons, however, dung beetles are vanishing. Which is bad for Florida ranchers.

This morning Stanbrook and Bonsignor on the Longino Ranch roam in the shade of old live oaks and scrub palm. Cattle in these hammocks hide from the heat … and eliminate. The researchers have set traps to gather dung beetles. These small buckets are baited with, what else, cow poop. The beetles after their prize tumble into the buckets and a pool of antifreeze, which causes their demise. Antifreeze is a preservative, Stanbrook said. And the pink liquid is best. Stanbrook will autopsy her catch back in Orlando. They are small insects, about the size of a ladybug. She catalogues her finds, the types that endure hurricanes and heat, and will re-introduce dung beetles that show the greatest endurance, which is mostly African, she said.

“It’s sad this is happening,” Stanbrook said of dung beetle population loss. She is stroking the carcass of little black beetle with the tip of her pinky, as others would a kitten. “With government’s help, things can be done.”

Some of us are born into a calling. As so it is with Stanbrook … and her assistant. An Irish native, Rosie Stanbrook as a kid was shown the back door in summertime, a cheese sandwich and an apple to nourish she and her brother left to explore the rural countryside.

“We’d catch things, it shaped what you were,” she said of a pleasant childhood finding insects.

Bonsignor is a UCF graduate in biology. After finding a shiny beetle impaled on fencing wire, he considers studying birds. A bird placed the beetle on the wire to marinate it, something that amuses and impresses him, he said, telling his story as a tiny fawn stepped near to inspect the trespassers digging cow poop.

Stanbrook will present a dung beetle update at a state cattlemen’s conference in September.

Back at a rustic office on Longino property, ranch general manager Cliff Coddington thanks the research team heading back to Orlando in a mud-caked Toyota pickup. It’s funny to joke about what dung beetles do, he said, but pure business when disease and costs are reduced by their work. “Anything to help us too,” Coddington said of research to help Florida ranchers limit worms and flies, livestock’s worst enemies.