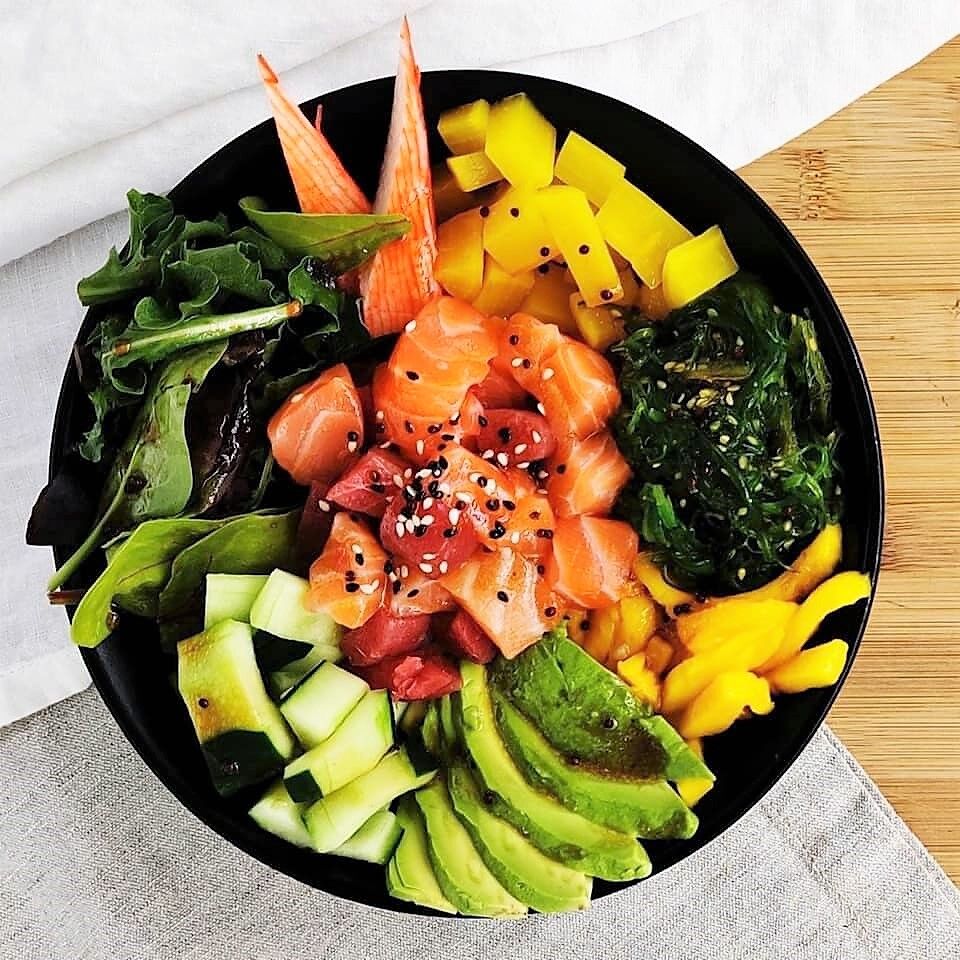 Big Bamboo’s salmon poke bowl is another feast for the eyes, with greens, carrot, avocado, mango, wakame and cucumber. 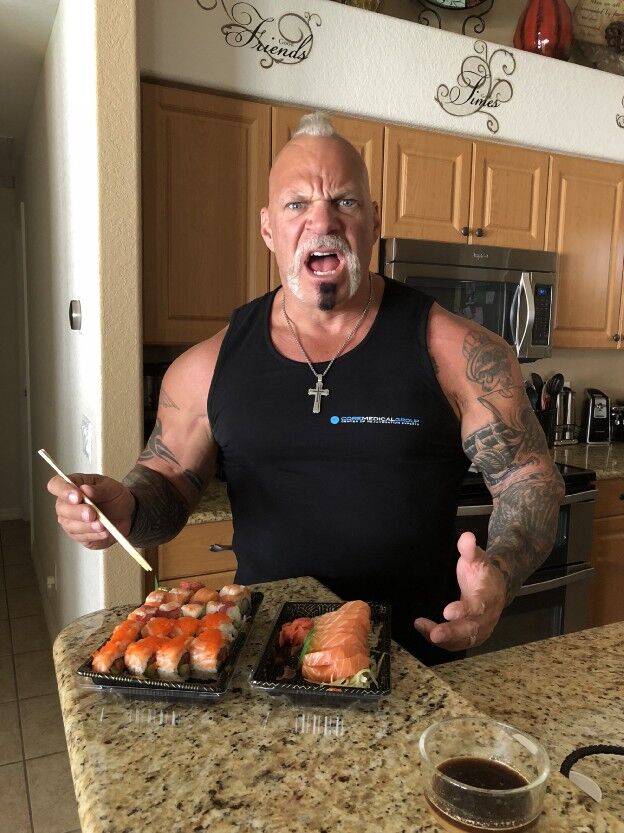 Mel Chancey once wrote: “Sushi — one of my favorite meals — is also a great way to consume fresh tuna.” He took things one step healthier by requesting what would become Hurricane Charley’s protein-packed Mel’s Bowls. 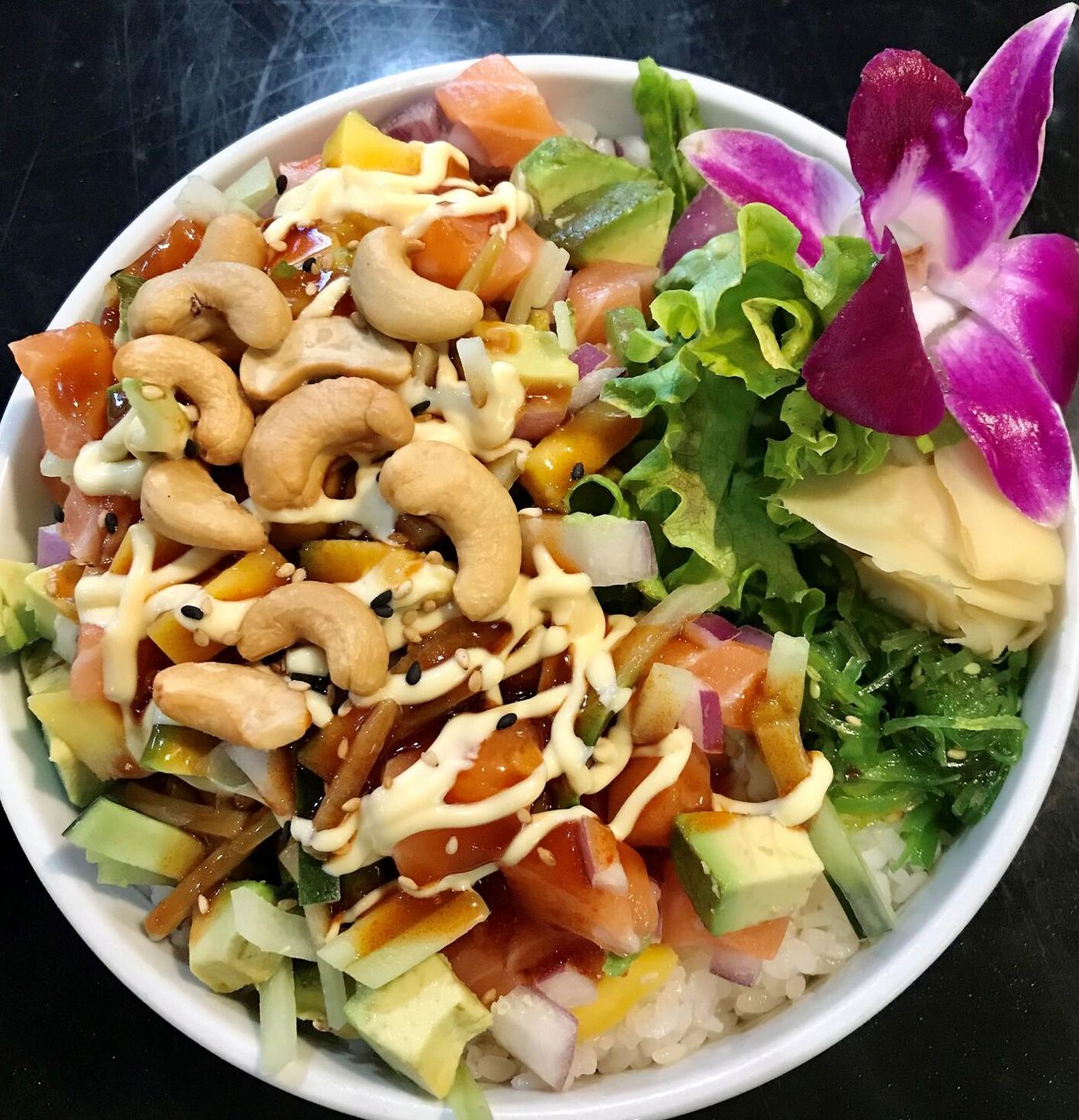 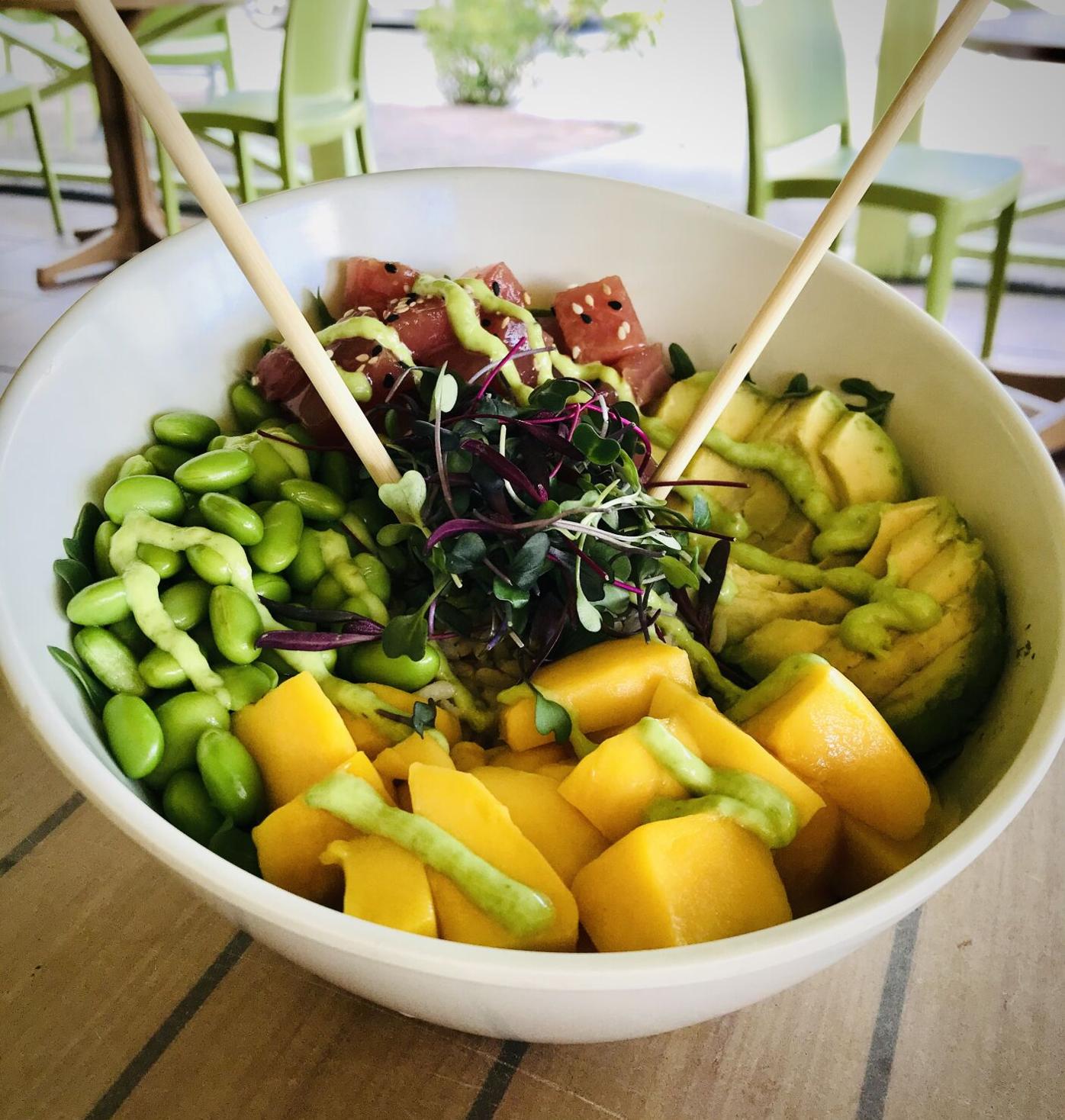 Mango Bistro co-owner Marie Laforge, also an artist and photographer, believes in making her bowls a feast for the eyes. 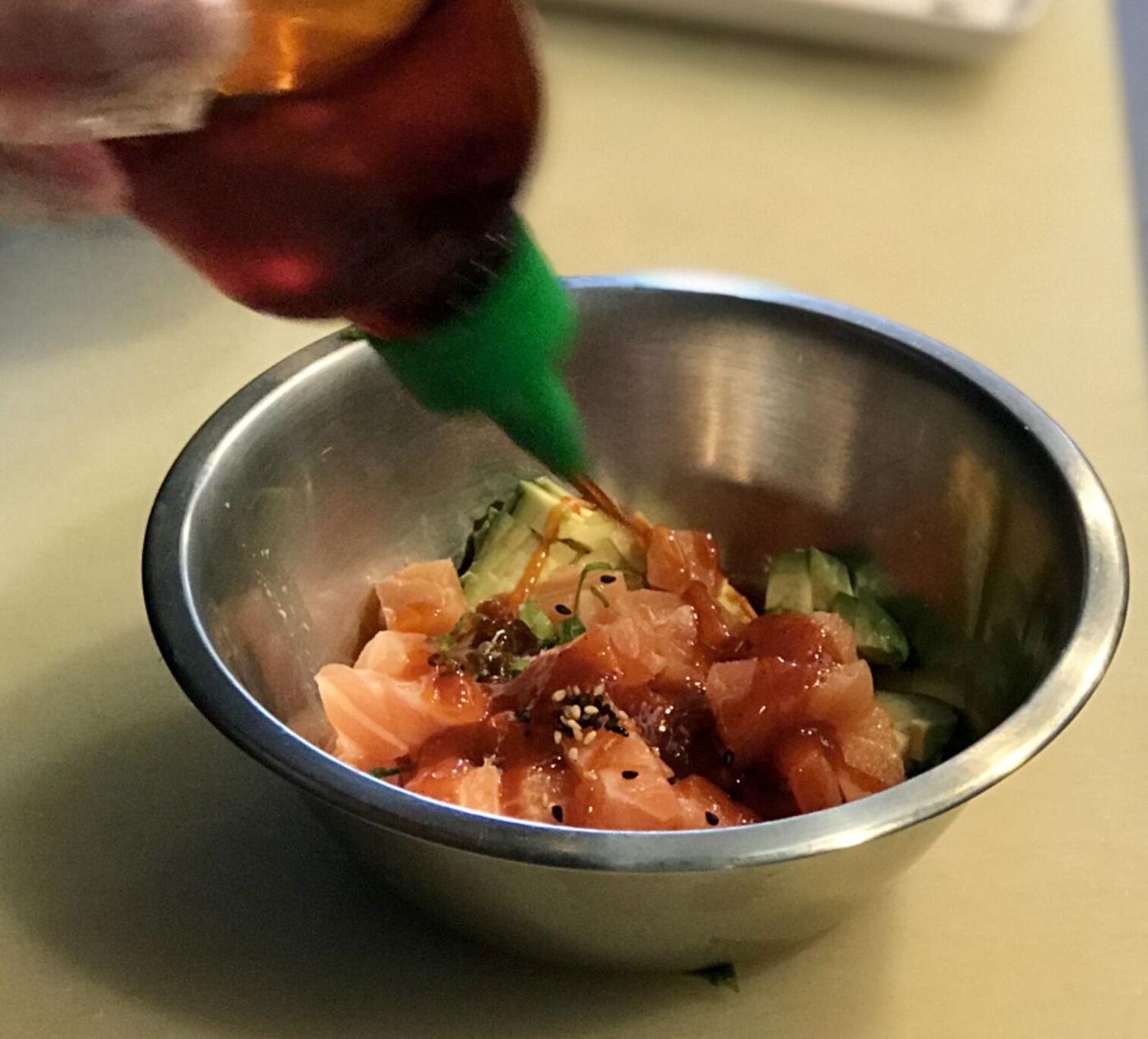 A squirt of chili oil/kimchee base finishes off Chef Zack Linton’s salmon poke bowl at The Placida Pearl. 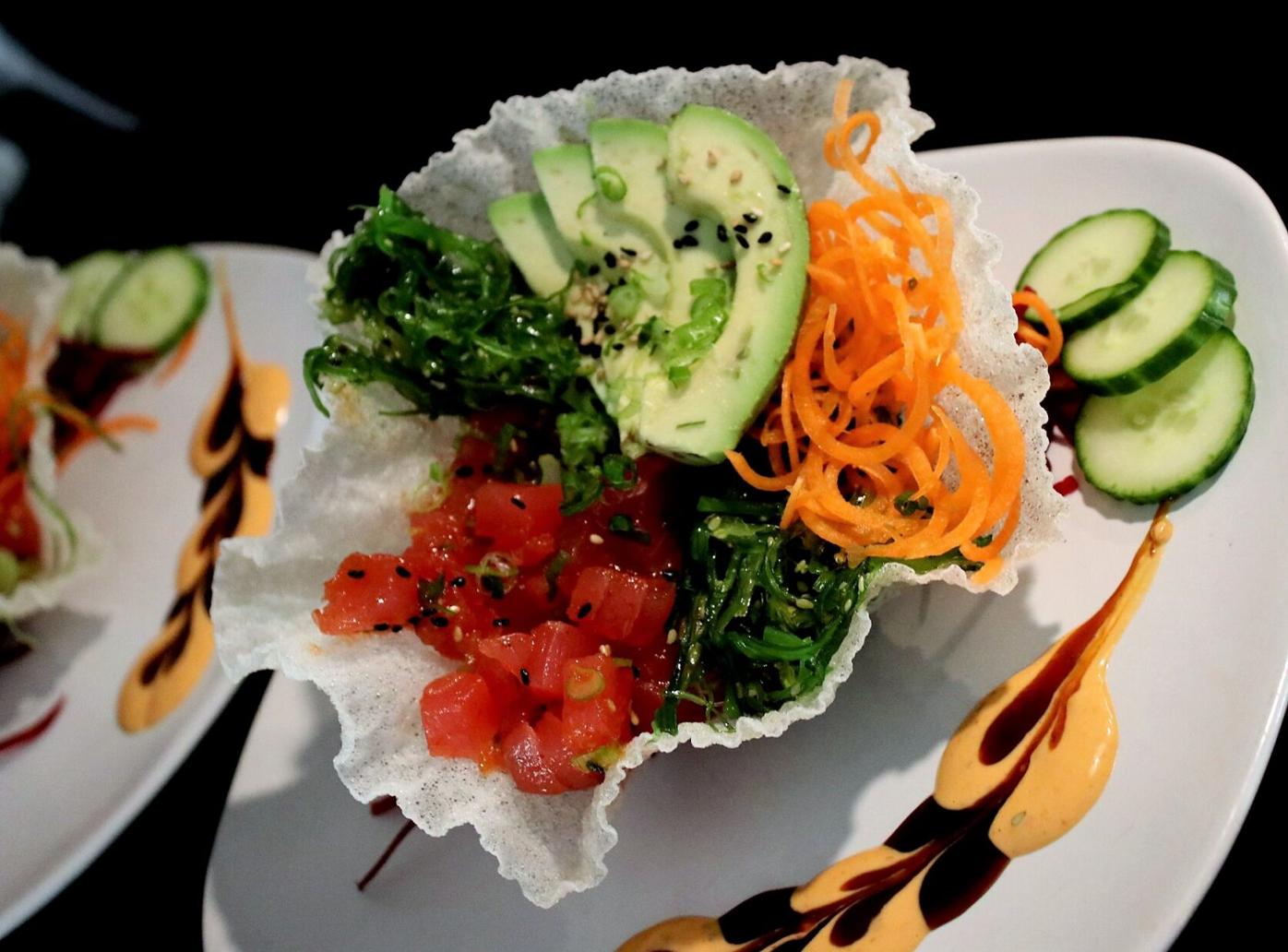 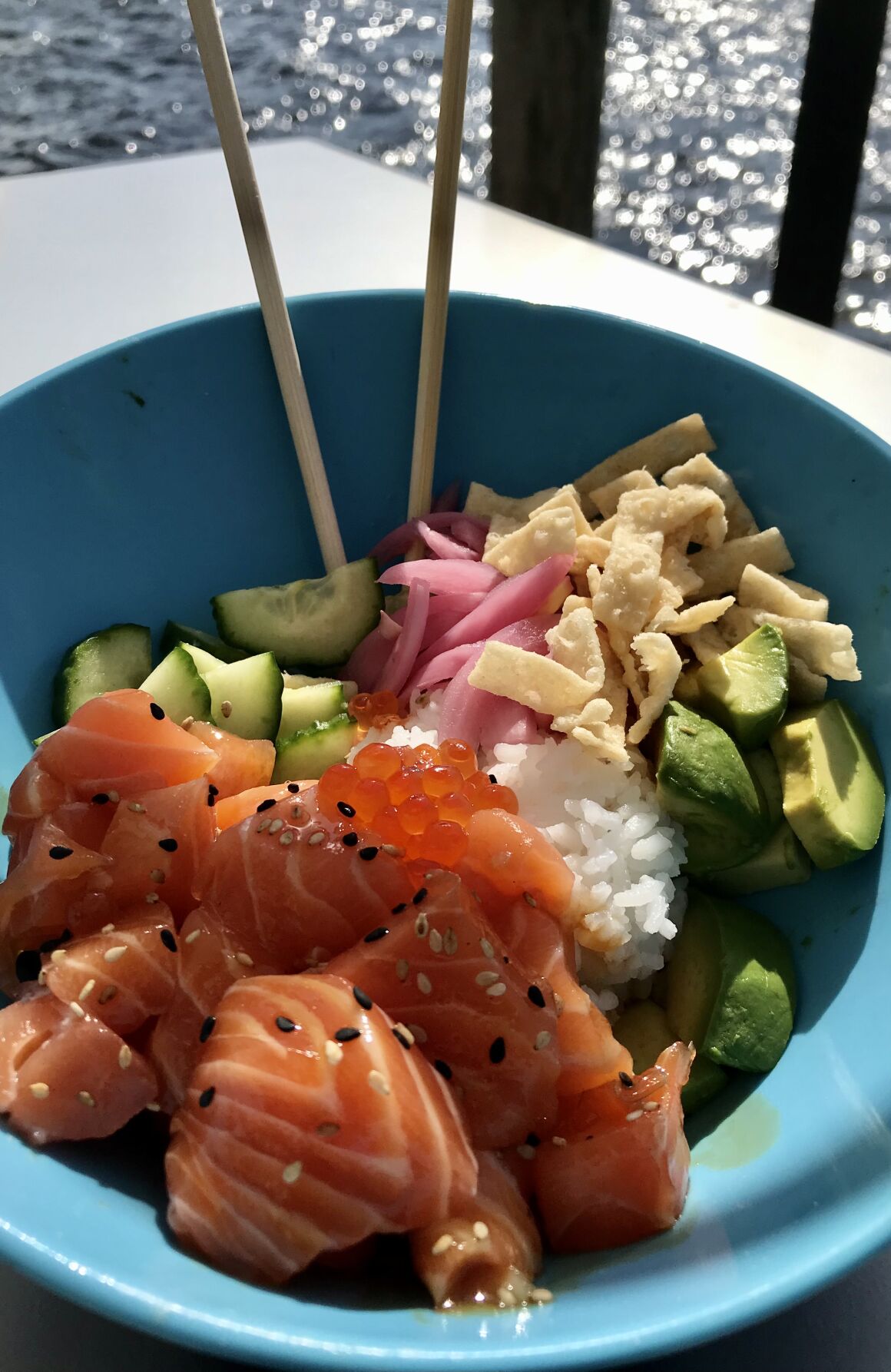 Big Bamboo’s salmon poke bowl is another feast for the eyes, with greens, carrot, avocado, mango, wakame and cucumber.

Mel Chancey once wrote: “Sushi — one of my favorite meals — is also a great way to consume fresh tuna.” He took things one step healthier by requesting what would become Hurricane Charley’s protein-packed Mel’s Bowls.

Mango Bistro co-owner Marie Laforge, also an artist and photographer, believes in making her bowls a feast for the eyes.

A squirt of chili oil/kimchee base finishes off Chef Zack Linton’s salmon poke bowl at The Placida Pearl.

“More and more major cities have been opening Hawaiian poke restaurants,” he said, “featuring the light, fresh Hawaiian poké bowl — traditionally, marinated sliced ahi tuna, rice, avocado, cucumber, sprouts, some crunch, some intense flavor. It’s been taking off on the mainland and will take off here. It’s something nobody’s doing around here.”

We’re a tad slow on the uptake, but eventually a worldwide trend does catch our eye and our appetite.

First there were sushi and Vietnamese pho to learn about, including the right way to eat them.

Now that they know enough not to gobble that sinus-searing green glob of wasabi, now that they’ve figured out chopsticks, Englewood, Punta Gorda and Port Charlotte apparently can’t get enough of poke bowls.

If you care about calories (which you probably do if you eat this sort of thing), a typical poke bowl will cost you 500 to 700. Not quite as bad as cheeseburger and fries, but if you’re that worried, skip the rice. Most poke places are happy to customize.

HOW DO YOU MAKE SUSHI FOR MEL CHANCEY? (... ANY WAY HE WANTS IT)

The first poke bowl supposedly dates back to the Hawaiian Kahuku Superette in 1992, but who knows who really threw together that first bowlful of sushi fixings.

Locally, it could’ve been Mel Chancey, former Hells Angels president, world-class bodybuilder and guy guaranteed to dominate any room he walks into.

“When I was working at Hurricane Charley’s, I did a sushi dinner for Scott Davis, a friend of my parents,” Noah Copenhaver remembered. “He said, ‘I don’t want you to be intimidated or anything, but my friend Mel Chancey is going to be there. He knows sushi, so make sure you bring your ‘A’ game.’”

Turned out that Chancey liked rolls well enough but really just wanted all the goods in a bowl — lots more protein, less rice, avocado, a little spicy, that was it. Customized poke bowl.

“I didn’t know what poke was at the time,” Copenhaver confessed. “But I told him, whenever he came to Hurricane Charley’s, I’d make it any way he wanted. Pretty soon, other people saw it, and it turned into our fourth-highest-selling item. It wasn’t even on the menu.”

The area’s first poke bowls are on the menu now.

Mel’s Bowls — customizable bowls of deconstructed sushi, with a seaweed or rice base, protein, vegetables, drizzly sauce and toppings from roe to tempura crisp — let you build a bowl with as many ingredients as you want.

After he moved to The Pier, it was hard for Copenhaver to re-create something he’d already done, yet make it unique.

“At The Pier, we try to keep it simple, do new flavors, use fresh ingredients and let them speak for themselves,” he said.

From the beginning, The Pier intended to strike a Pacific Rim/Polynesian note in its seafood, sushi and poke bowls. Poke bowls’ Hawaiian roots earned them a permanent place on the menu.

PLACIDA PEARL— MORE THAN YOU EXPECT

Not every sushi chef likes to arrange his artistry in a bowl. Many fine sushi establishments offer no poke at all.

“But,” said The Placida Pearl’s Chef Zack Linton, “it’s a natural transition to put it in a bowl.”

Like the Placida nightclub itself, Chef Zack believes in giving customers both what they want and more than they expect.

We can’t give poke bowls all the credit, but Chef Zack’s sushi art bested that from the poke-less Midori and Noy’s Bistro, to land The Daily Sun’s 2020 Best of Englewood sushi award.

His two simple poke bowls come with either tuna or salmon tossed with avocado, scallions, sesame seeds and chili oil/kimchee base, topped with a tangle of wakame.

To make the most of his colors and flavors, he eschews carb-heavy rice. But his mixed poke salad compromises by nestling tuna or salmon, carrots, cucumber and wakame in a crispy-thin rice paper bowl.

For poke purists who sneer at what they call “mainland poke,” he boldy goes beyond poke with chirashi sushi — literally, “scattered sushi” — a varied kaleidoscope of different raw fish layered on rice with marinated cucumber.

It could be our next new thing.

Poke is the only sushi-like option at Englewood’s Mango Bistro (301 W. Dearborn Street).

Marie Laforge and husband Ricardo Ruggiero’s home of everything fresh, gluten-free and plant-based introduced a list of Buddha bowls about a year ago. The closest of them to true poke is the Aloha Poke Bowl, in ahi tuna and tuna-mimicking plant-based-beet versions.

“I lived in California for 10 years and visited Hawaii, so I love that kind of food,” said Laforge, who also dreams of bringing real ramen to town.

Although her specialty is Chinese, Carina Xu was shrewd enough to know that her and husband Eric Lin’s Asian fusion Big Bamboo (4104 El Jobean Road) had to include poke bowls — tuna, salmon and eel — in its Japanese lineup, as well as a riceless, multiprotein-packed bowl.