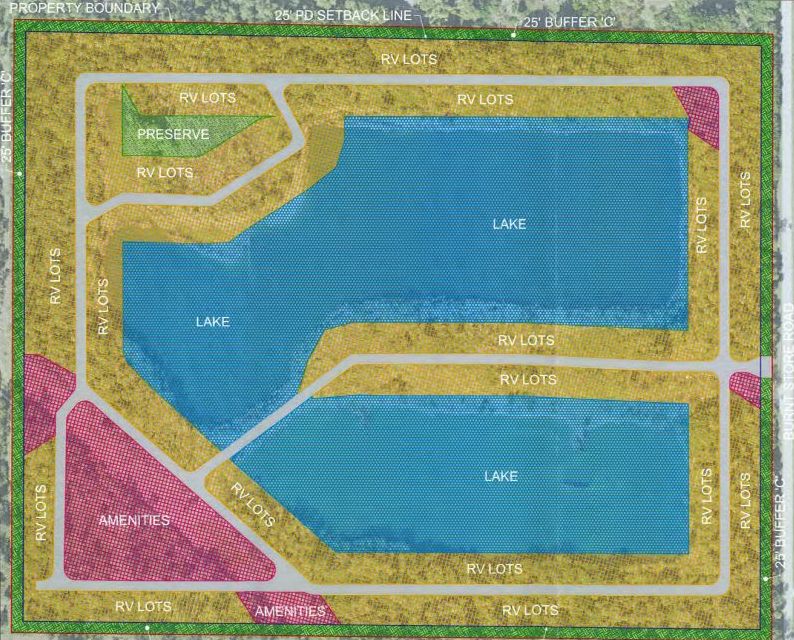 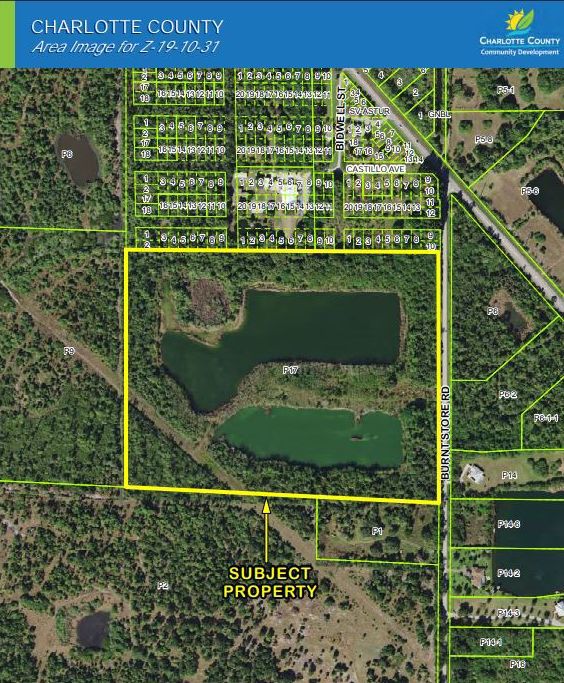 This earth view of the proposed RV site shows that it is surrounded by largely undeveloped land with Burnt Store Road and Taylor Road to the right. Much of the land is zoned for single-family housing. Burnt Store road narrows to a country road here.

This earth view of the proposed RV site shows that it is surrounded by largely undeveloped land with Burnt Store Road and Taylor Road to the right. Much of the land is zoned for single-family housing. Burnt Store road narrows to a country road here.

A proposed park for 234 recreational vehicles just outside Punta Gorda got 4-1 approval from commissioners.

The owners of 8979 Burnt Store LLC have been trying to find a compromise on this 50-ace project since last year. In the last 17 years, previous developers got permission but never followed through on plans for single-family homes, cluster homes, attached homes or RVs. One of the big issues for the RV plan is that the one-mile remnant of the old Burnt Store Road is narrow with no shoulder and steep embankments along the side. County engineering staff originally tried to require the developer to widen the road and rebuild the intersections at Taylor Road and Jones Loop Road.

In the current compromise, the developer has agreed to widen the road if necessary to 20 feet rather than 22 feet. That’s because the developer is confident that the road is already 20 feet, consultant Jason Green told commissioners last week. The developer is willing to help widen the intersections, Green said, but he emphasized that the county allows public use already on this road.

“If it’s bad and unsafe, it shouldn’t be open to the public,” he said.

Five neighbors protested the project or asked for stricter controls.

“I’ve seen vehicles in the ditch there,” said neighbor Michael Haymans. “There’s a better way to do it. This is a horrible circumstance. Please don’t do this to us.”

Haymans and other neighbors pleaded to protect the oak canopy that arches over the old road.

Commission Chairman Bill Truex advised the developer to keep the canopy if and when they come back for approval of their site plan.

“I will tell you that the canopy is something that’s important,” he said.

Commissioner Chris Constance voted against the project, citing his fears about the road. He also chastised staff for how they interpret wetland regulations, which say don’t impact wetlands unless unavoidable. The project is near the North Fork of Alligator Creek.

“I have a problem when staff brings it forward and say, ‘We think this is great. We think it meets all the requirements.’ No. There are impacts to wetlands, and you avoid them by not developing. You might want it (the park), but is it necessary?”

Commissioner Joe Tiseo said he’s OK with the road, seeing that it is already being used.

“I can’t discriminate on RV traffic as opposed to other traffic,” he said, but added, “what I’m really hung up on is the density.”

Tiseo said he wants an opaque fence, but Green said that would be much less attractive than leaving the mature native trees on site. The developer is going to try and keep those trees, he said and just remove invasive plants. But if invasives are more than 50% of the landscape, the developer will use either a fence or a raised berm with new plantings.