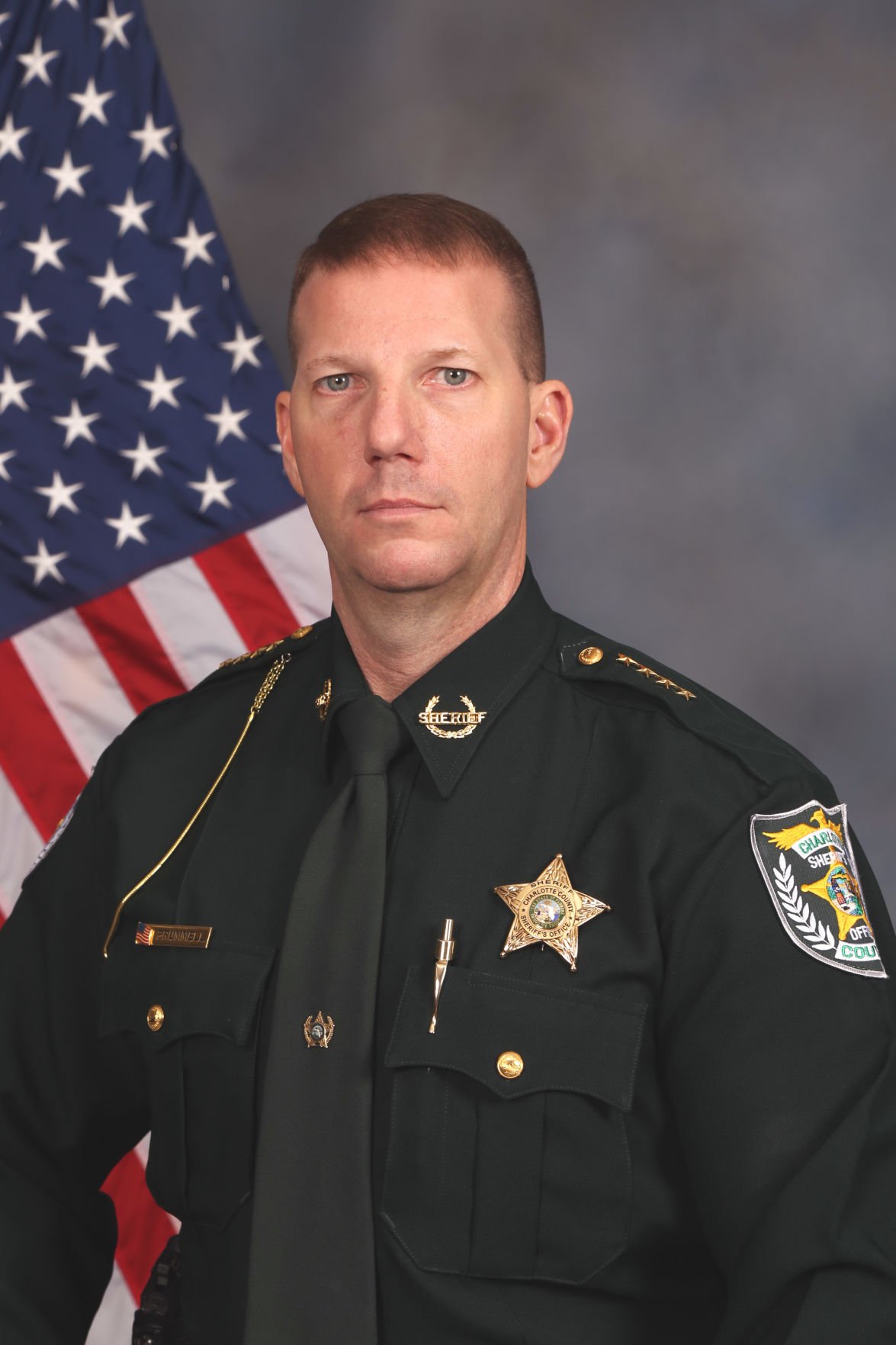 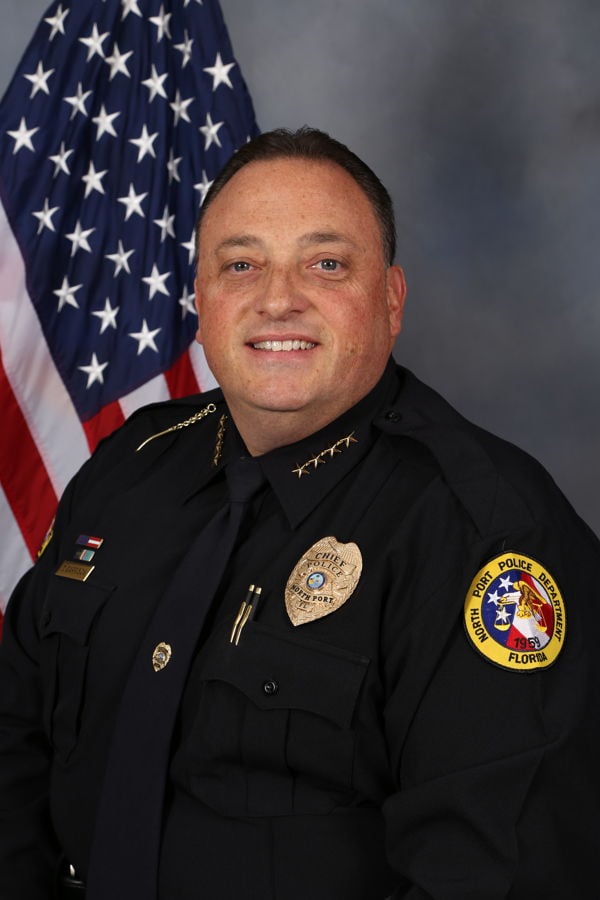 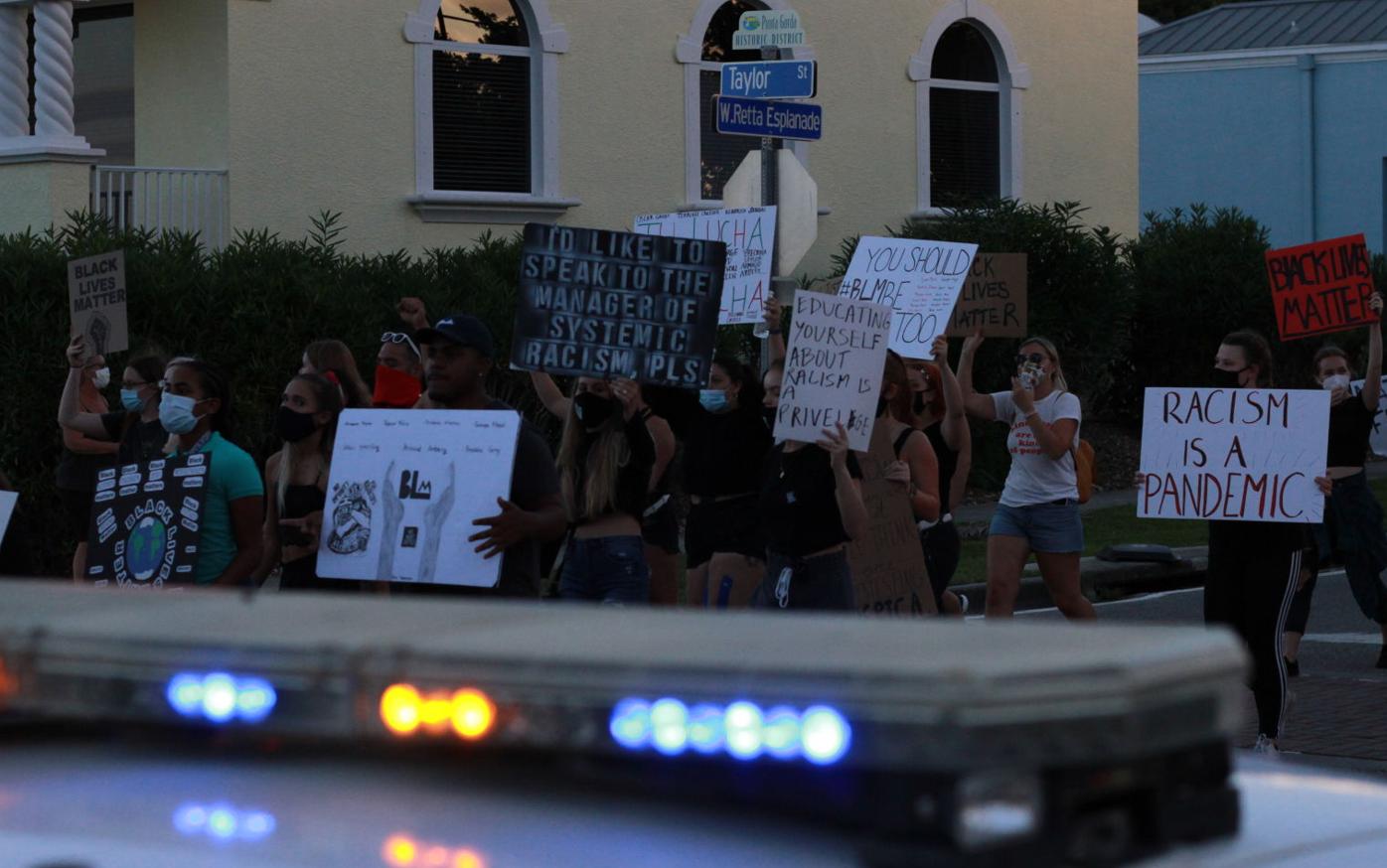 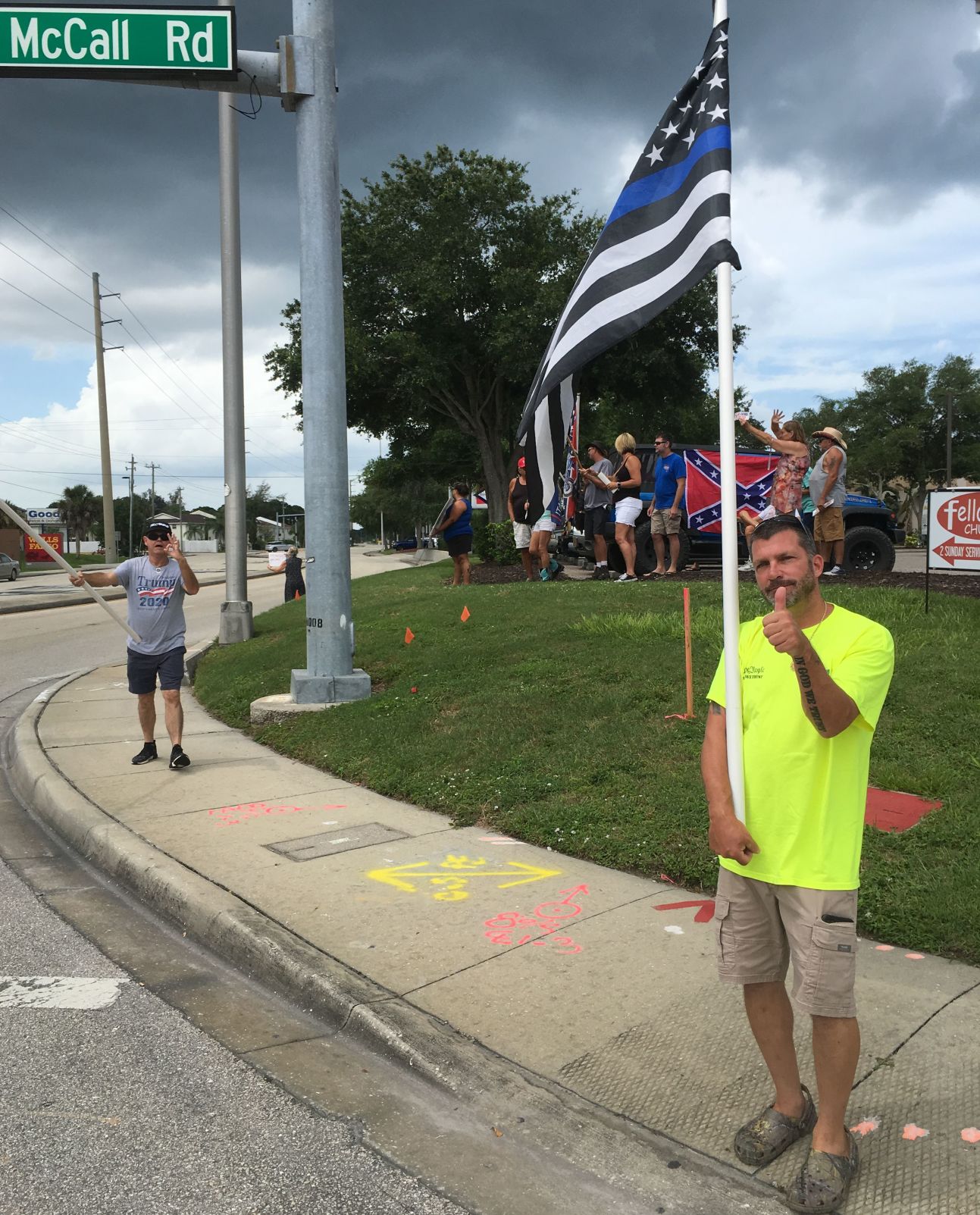 About a dozen people with signs supporting law enforcement and President Donald Trump rallied Saturday, across the street from a pro-Black Lives Matter demonstration. 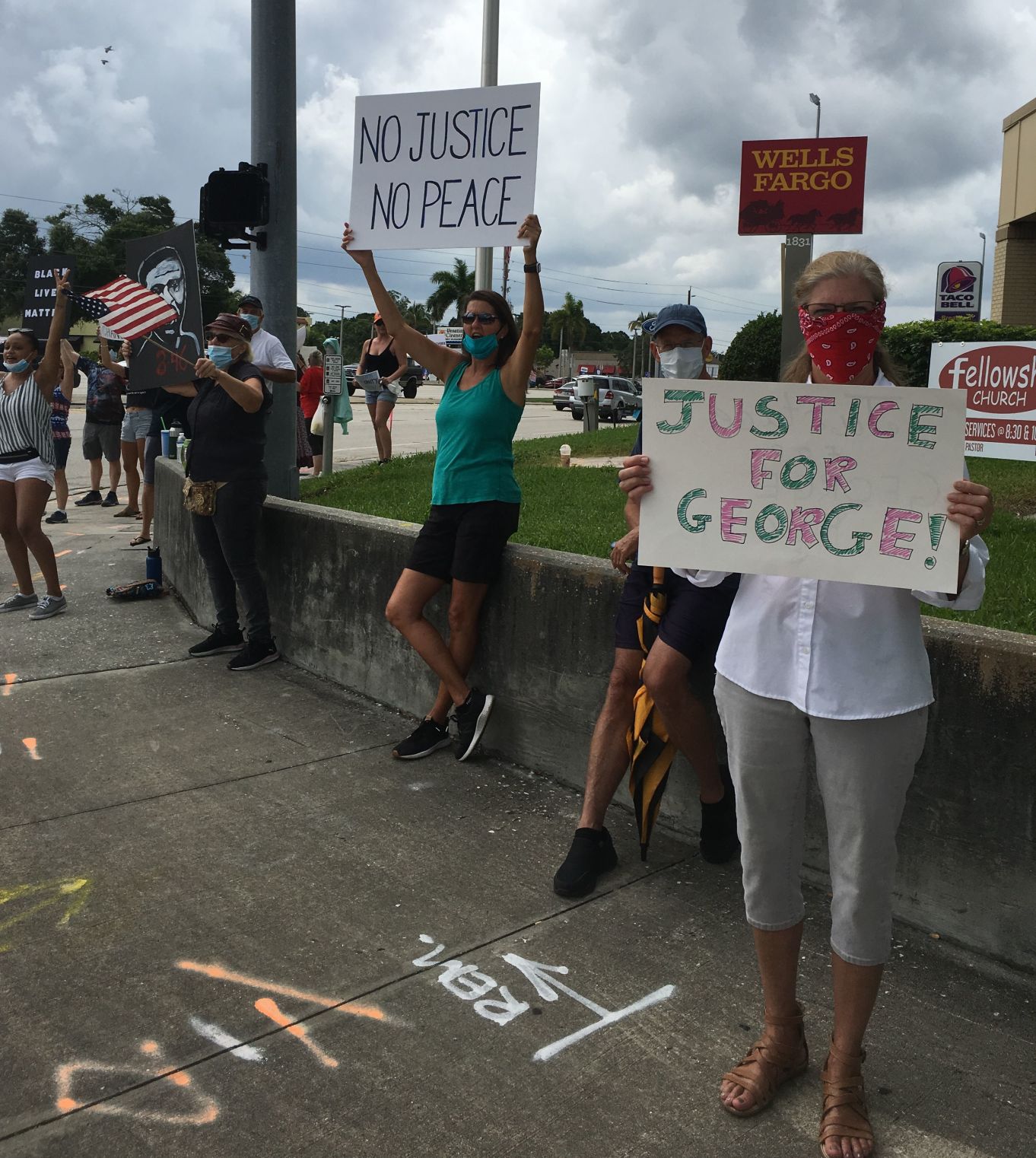 Demonstrators with signs supporting Black Lives Matter and George Floyd at South McCall and Placida roads in Englewood on Saturday. 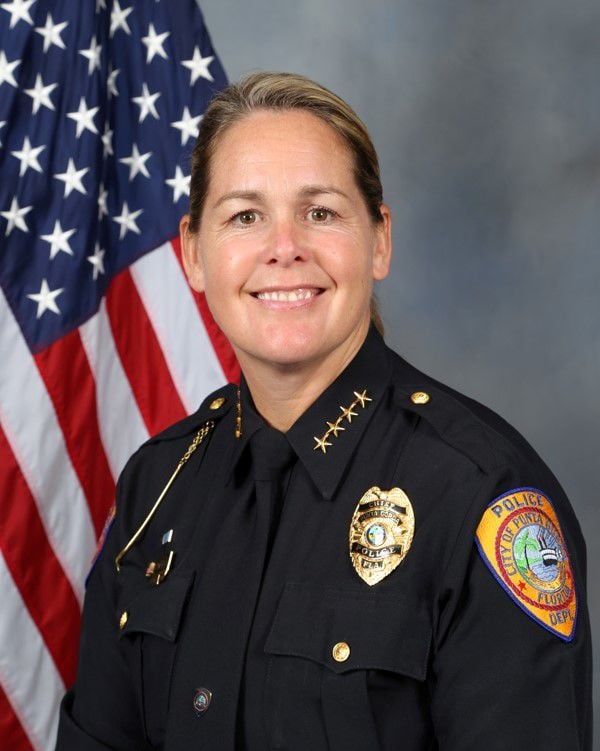 About a dozen people with signs supporting law enforcement and President Donald Trump rallied Saturday, across the street from a pro-Black Lives Matter demonstration.

Demonstrators with signs supporting Black Lives Matter and George Floyd at South McCall and Placida roads in Englewood on Saturday.

The death of George Floyd at the hands of a Minneapolis police officer has divided the nation’s opinion of law enforcement once again. Some say there are just a few bad apples in the profession, while others have called for “defunding the police” to radically re-imagine public safety from the ground up.

The Minneapolis City Council recently voted to “disband” the Minneapolis Police Department, but it’s unclear exactly what it will be replaced with. The Sun spoke with local law enforcement leaders to hear their perspectives.

“So disbanding or defunding police, I’m hearing a lot about that in the media,” said Punta Gorda Police Chief Pam Davis. “I think it can be a knee-jerk reaction. You really have to think about what that means. If you’re going to start not funding the police, you’re going to take that money and put it into different community programs — it sounds pretty good. But ultimately what’s going to happen?”

Davis said 911 centers are staffed 24/7, but what happens if that funding has been redirected to organizations that are only open during the day?

“We’re still going to need to respond to those type of calls — people in crisis, family situations where we might have to call DCF, and things like that,” she said. “I don’t want to see money taken away from training programs and community outreach programs that are going to make our officers better, regardless of what type of calls they have to go on.”

In Punta Gorda, Davis said the department is already operating on a lean budget, and she can’t imagine where funding could be taken from and redirected. The majority of community outreach programs the police department does are funded by community donations, not taxpayer money, and the department relies heavily on volunteers.

Charlotte County Sheriff Bill Prummell agreed defunding the police is not the answer.

“You put communities at risk if you start defunding law enforcement,” he said. “I can’t speak for all agencies, but with regards to mine, 84 to 85% of the budget is personnel. If you start defunding, that means you’re going to lose boots on the ground.”

In North Port, Police Chief Todd Garrison said he’s seen legislation cut money year after year for social services that deal with things like mental health, homelessness, drug addiction, and more. Law enforcement gets left to deal with the problems created by that lack of funding, but their own funding has not been increased.

“People are now saying law enforcement should not be involved,” he said. “Who else is going to do it other than law enforcement? Are our budgets increased to pick up those extra tasks and duties? No. Defunding law enforcement is not the right course of action because we’re the only people out there who provide safety and security for everybody.”

Some are calling for more middle of the road reforms, such as the “#8Can’tWait” policies, reported to decrease police violence by 72%. The policies are inspired by recommendations made by President Barack Obama’s Task Force on 21st Century Policing.

Garrison said NPPD follows all of these, and the majority are also policies for Charlotte County law enforcement.

Davis said the one PGPD does not have is the ban on shooting at moving vehicles.

“I hesitate to make that a blanket policy — don’t shoot at a moving vehicle,” she said. “What if the protesters are here or they’re having a parade downtown, and somebody purposefully starts driving into them and there’s nothing we can do to stop them?”

The department’s policy does, however, include strict guidelines that state for an officer to shoot at a moving vehicle, it would have to be a deadly force situation.

Prummell said his agency follows the majority of the #8CantWait, but stated it’s not always feasible to give a warning before shooting, bringing up the last officer-involved shooting, where a civilian, Sean Constance, reportedly got out of a car and immediately pulled a gun on a deputy and trainee. The trainee returned fire, killing him.

“They had to react,” Prummell said. “Even saying drop the gun or whatever, sometimes you don’t have time. You have to react.”

His deputies are trained to follow a use of force continuum, but he stated the way a person acts dictates deputies’ response.

“Sometimes you’re able to start verbally, but it may go like it did with that incident,” he said. “It may go right to the firearm, because that’s what (the suspect) did.”

“That’s something you would think is just common sense,” he said.

The Justice in Policing act recently unveiled by Democrats in Congress includes some of the same reforms but also includes other initiatives toward transparency, such as grants for State Attorney Generals to create an independent process to investigate police misconduct and excessive force. It would also create a federal registry of police complaints and whether disciplinary action was taken.

Currently, outside investigations are determined by state statute and the Florida police officer Bill of Rights. If an agency has more than 30 officers, the investigation must be done by the agency.

Davis said she would like to have the ability to use an outside agency, but PGPD has 38 officers.

“We have two captains,” she said. “It’s difficult to ask somebody that’s a lower rank to investigate them, so I would want to go outside.”

Prummell also said he would be open to more outside investigations, and he said he would support the idea of a federal registry of complaints.

“If there’s a bad cop, I think you need to know about it,” he said.

Every department is different

Davis said she wants to ensure the community the police department is proactive in making sure officers are following best practices. They pursue training beyond what is required by both the state or for accreditation purposes, and policies are reviewed every two weeks.

“The one frustration we feel is sometimes these blanket statements about law enforcement don’t really apply because there’s not a standard every agency has to meet,” said Lt. Dylan Renz, who is in charge of training. “We’ve been doing these ‘8 Can’t Wait’ things for years and years and years, but we know there are agencies in our country that are not following most of these things.”

“Not all communities are alike; not all agencies are alike,” he said. “Our main function to serve and protect is the same, but the way we do it could be different because of the makeup with our agency and our department. We do need to get rid of the stigma though and it gets frustrating to us where people paint us with that broad brush.”

Garrison said what happened in Minneapolis was appalling, but the community support for the North Port Police Department has remained strong.

On the other hand, I agree completely that some imaginative rethinking needs to be done in the face of nationwide law enforcement failures. I know Chief Davis has been on the frontline of retraining officers and seeking to reform law enforcement, and I like a lot of the reform ideas. But I have a problem with the underlying assumption that every certified law enforcement officer needs to be openly carrying a gun, taser, etc. in their duties. Is the chief or the sheriff really going to need a side arm? The community affairs officer? We have militarized law enforcement in the U.S. and in doing so undercut its ability to responsibly serve the public. There are plenty of examples outside our nation where police are not militarized and don't visibly carry show-of-force items on their person. Lots of talk over the years about implementing some of those examples in our own law enforcement, but it's never happened to my knowledge.

But it's always been done it this way! Just what we need to hear in the middle of a Police Brutality Crisis.

Nothing makes a real leader more disappointed than when a person in power makes that statement.

Now the LEO bosses are adopting that stance - more to protect their turf and budget than to listen to new ideas for improving Public Safety.

Re-imagine Public Safety is a better description, but just not as catchy on a sign.

Time for LEO bosses Prummell and Davis to wake up. Change is coming one way or another. First way is if they lead and re-imagine how they can do the same with less with a solid plan. The second way is when the economy crashes because of high unemployment and lower tax revenue FORCES them to cut staff.

Change is coming. Lead, follow, or get the heck out of the way.