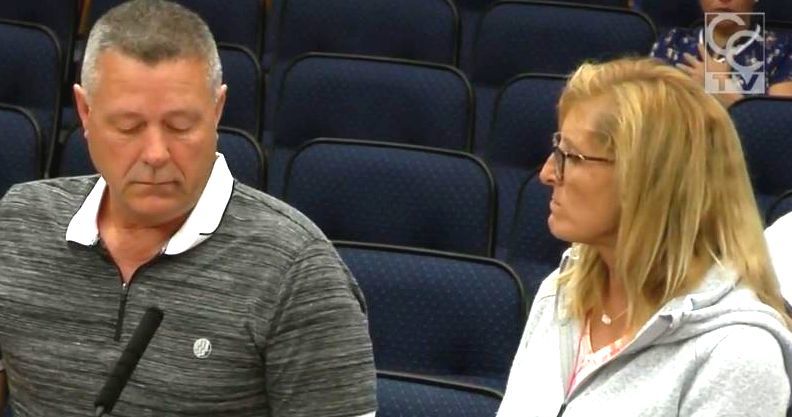 Dan and Tina Mcatee struggled to express the strain they felt dealing with Rhino Custom Homes. 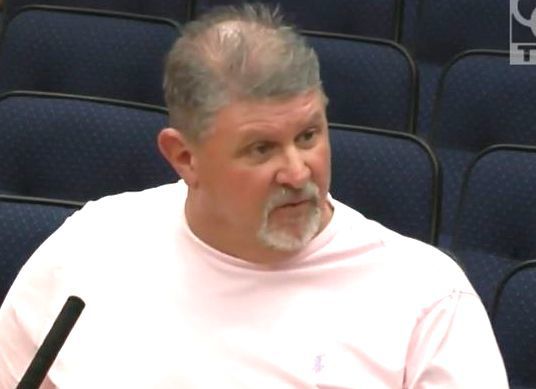 Dan and Tina Mcatee struggled to express the strain they felt dealing with Rhino Custom Homes.

And a business partner’s life in ruins.

The Charlotte County Construction Industry Licensing Board Thursday barred builder Mark Southwick of Rhino Customs Homes LLC from pulling more construction permits but is allowing him 60 days to complete projects currently unfinished. If he completes the projects, he can start pulling permits to build again. He must meet with clients monthly, however.

Would-be homeowners and contractors lined up to tell the board how they felt cheated by Southwick and then threatened when they confronted him for failing them.

“We are so in debt, and he keeps making excuses,” said Tina Mcatee, who with her husband, Dan, cannot move into a shell that was to be their retirement home in South Gulf Cove.

Dan Mcatee told the Sun later that he can no longer retire due to the amount the couple must now pay to finish their home and pay off contractor liens. They have paid Rhino $188,000, have $24,000 in liens and paid $40,000 to fix windows and the roof, he said. Yet the home is still a shell with no walls, bathroom or kitchen.

This is the third home construction company accused of cheating or failing buyers to come before the county licensing board in the past 14 months. The others were HD Custom Homes and Casas Del Sol. The market has burned hot in Charlotte County, with the county outpacing wealthier counties to the north and south in new home growth rates.

“You have said you were never going to let this happen again,” local real estate agent Shannon Moore said to the board. “It’s happening over and over.”

“We didn’t let years go by like the other builders,” board member John Damon responded, noting the first complaints were in August.

Southwick had other issues, filing a defamation lawsuit against Moore after posting accusations about him on Facebook, for instance. The suit has since been dismissed, according to Lee County court records.

County Licensing manager Erin Mullen-Travis calculated liens against Rhino have dropped to about $110,000. It was much higher, but Southwick has been paying off contractors since the state restored his license in December. His license was suspended in the summer when the state board found he had built a bathroom without a permit, Southwick confessed to the county board. Those months without work caused his problems to escalate.

His customers, however, were not feeling his pain.

“He would not respond to any of my calls, any of my text messages,” said Nicole Hummel, “and when I spoke out against Rhino Custom Homes, he threatened to sue me.”

Homeowners said they felt threatened by Southwick, and that he used profane language, particularly in reference to his women customers.

‘Too big too fast’

Southwick defended himself before the board Thursday night, saying he wished he had never tried to be more than a small contractor building a few homes a year. He took on up to 60 or 70 contracts in one year, however, he said.

Southwick also implied that blame for the business failure lies with his business partner since 2017 — real estate agent Stefan Damaniov of Estero — but Damaniov painted a different picture.

Damaniov was not at the hearing, but responded to questions when reached by the Sun.

He alleges his life has been destroyed by his brief alliance with Southwick.

“I lost my houses. They’re in foreclosure. My truck was repossessed,” Damaniov told the Sun. “I lost everything. I’m just lucky that my family’s still with me.”

Damaniov said that it was Southwick approaching him to form a business.

Homeowners at the hearing accused Southwick and Damaniov of living high, driving around in Mercedes Benz cars and buying boats.

“That would be him,” Damaniov said. “He was the one that bought a Mercedes and a boat.”

Damaniov lost his money through mortgages on two speculative or spec houses, one in South Gulf Cove and one in Lee County. Mortgages came due but Southwick never finished them. Damaniov backed out of the joint defamation suit against Moore, and says Southwick brings his own bad publicity by his behavior.

“He’s the kind of person that screams and yells at everybody,” Damianov said.

Southwick promised prices that were too low and construction times too short, Damianov said.

So, Damaniov appears to be in a similar position to some of the homeowners using their own funds to finish their homes when Southwick could not.

Damaniov said it is extremely unlikely Southwick will finish anything in 60 days as ordered.

“It will probably be more like six years,” he said.

That may be part of why Sarasota lawyer Alan Tannenbaum showed up at the hearing to offer advice to the homeowners. He is also representing others in a bankruptcy hearing for a North Port builder leaving his clients in the lurch. Elk Ridge Custom Homes reportedly left dozens of projects unfinished. His advice was to do what homeowners are doing with HD Custom Homes. They have forced involuntary bankruptcy on the company and are now waiting to receive funds from the state’s contractor recovery fund, Tannenbaum said. Those homeowners may see some money in 2021, he added.

“I’m not opposed to that,” said Damianov. “Whatever they have to do for the customers to get something.”

The 39-year-old childhood immigrant said he is starting over.

“I just have to work and recover my life, recover from Mark Southwick.”