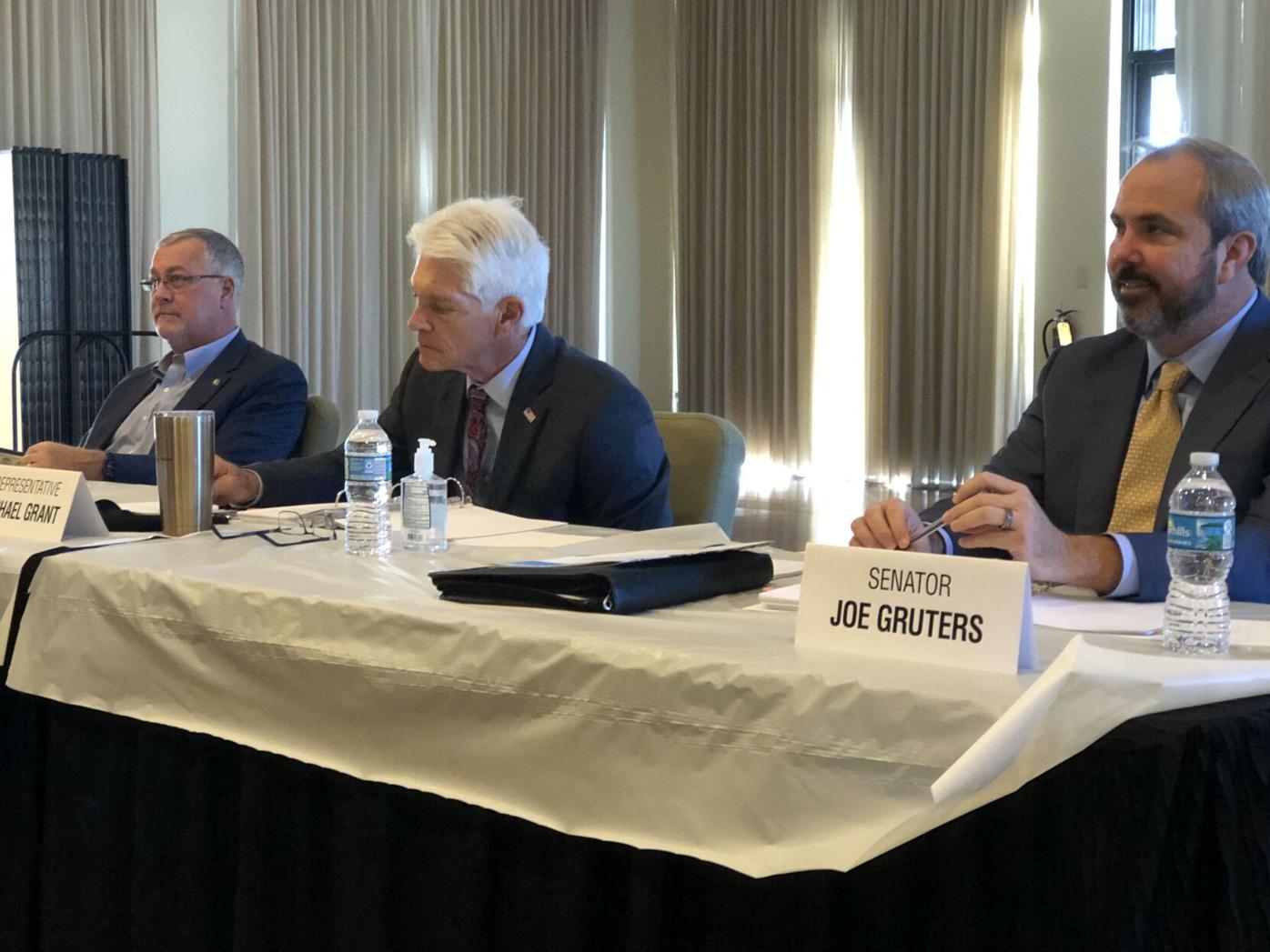 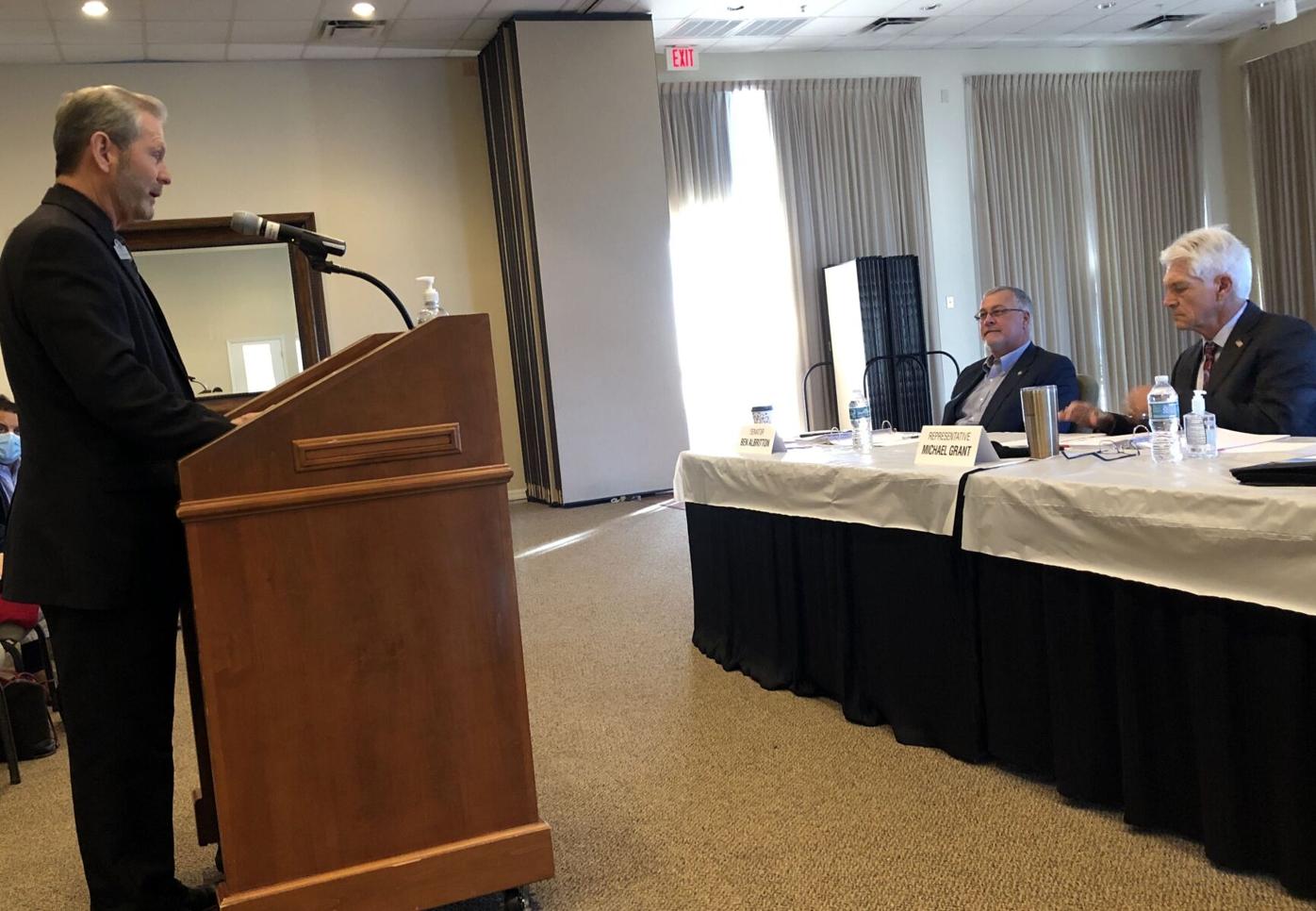 Punta Gorda Airport Authority Commissioner James Herston advises the Charlotte County legislative delegation that the authority does not want them to assist in a take over of the airport, as proposed by some on the Punta Gorda City Council, which has since rescinded its request. Sitting to the left is Sen. Ben Albritton. To the right is Rep. Michael Grant.

Punta Gorda Airport Authority Commissioner James Herston advises the Charlotte County legislative delegation that the authority does not want them to assist in a take over of the airport, as proposed by some on the Punta Gorda City Council, which has since rescinded its request. Sitting to the left is Sen. Ben Albritton. To the right is Rep. Michael Grant.

Dozens of ordinary citizens and high-ranking officials made their pitches Thursday to Charlotte County’s three-member legislative delegation, who also represent seven other counties from Polk to a piece of Lee County.

Hearing the presentations, and cutting them off if they ran too long, were Rep. Michael Grant, Sen. Ben Albritton and Sen. Joe Gruters, all Republicans. The gathering, as usual, was at the Punta Gorda Isles Civic Association.

The delegates warned the audience that this will be an unusual year. That’s because the Legislature must address an estimated $5.2 billion shortfall in revenue for this year and next due to the coronavirus pandemic.

“It’s going to be tough this year,” said Albritton to those gathered. “The good news is we’re required to balance the budget...It may be we’re not going to do good policy.”

Issues ranged from pandemic-related increases in unemployment insurance to re-opening the investigation of the 9/11 terrorist attack.

The local March Against Mosaic seeks legislative help to prevent any expansion of Mosaic Fertilizer in Central Florida along the Peace River, which ends in Charlotte Harbor.

Joe Gilberti told delegates he owns an underground spring that will supply the state with cleaner water than currently available.

Florida Gulf Coast University seeks $2.3 million to expand its nursing program from 176 to 264.

Lee Health asked for assistance in ensuring Medicaid (health care for the poor) funding for a large influx of people likely to join Medicaid roles due to the pandemic.

Charlotte County seeks amendments to open meeting laws to allow more than one commissioner to attend meetings of emergency services personnel during a public emergency.

Charlotte County seeks reassurances that if the Airport Authority were to be dissolved, the operation would revert to county ownership. This was introduced following a move, now withdrawn, by the Punta Gorda City Council to take ownership of the airport to pursue privatization.

Airport Commissioner James Herston advised the delegation the authority opposes any takeover by the City of Punta Gorda.

School Board Chair Wendy Atkinson asked legislators to protect schools from budget cuts and from dramatic increases in state employee retirement fund mandates. She also asked for more flexibility in student achievement requirements in exchange for progress in closing achievement gaps by 2022.

Parent Joe Williams asked for a return to paper report cards for students, in addition to the online system which he said is not kept up to date.

Integrity Employee Leasing warned legislators that Florida employers such as restaurants could be overwhelmed by increases in unemployment insurance as a result of job losses during the pandemic.

Airport Commissioners James Herston asked for exemptions from the new minimum wage law to protect senior citizens who work at the airport who might cut their hours to avoid taxation of their social security benefits.

The Office of Criminal Conflict and Civil Regional Counsel asked for money to pay for two more forensic social workers and six more lawyers who prosecute cases of child neglect and abuse. Child abuse has grown dramatically during the pandemic.

Michael Zarzano thanked the delegation for not requiring Florida citizens to wear masks. He also asked for more investigation of the terrorist attack on the twin towers in New York in 2001, to prove theories that it was a planned demolition.