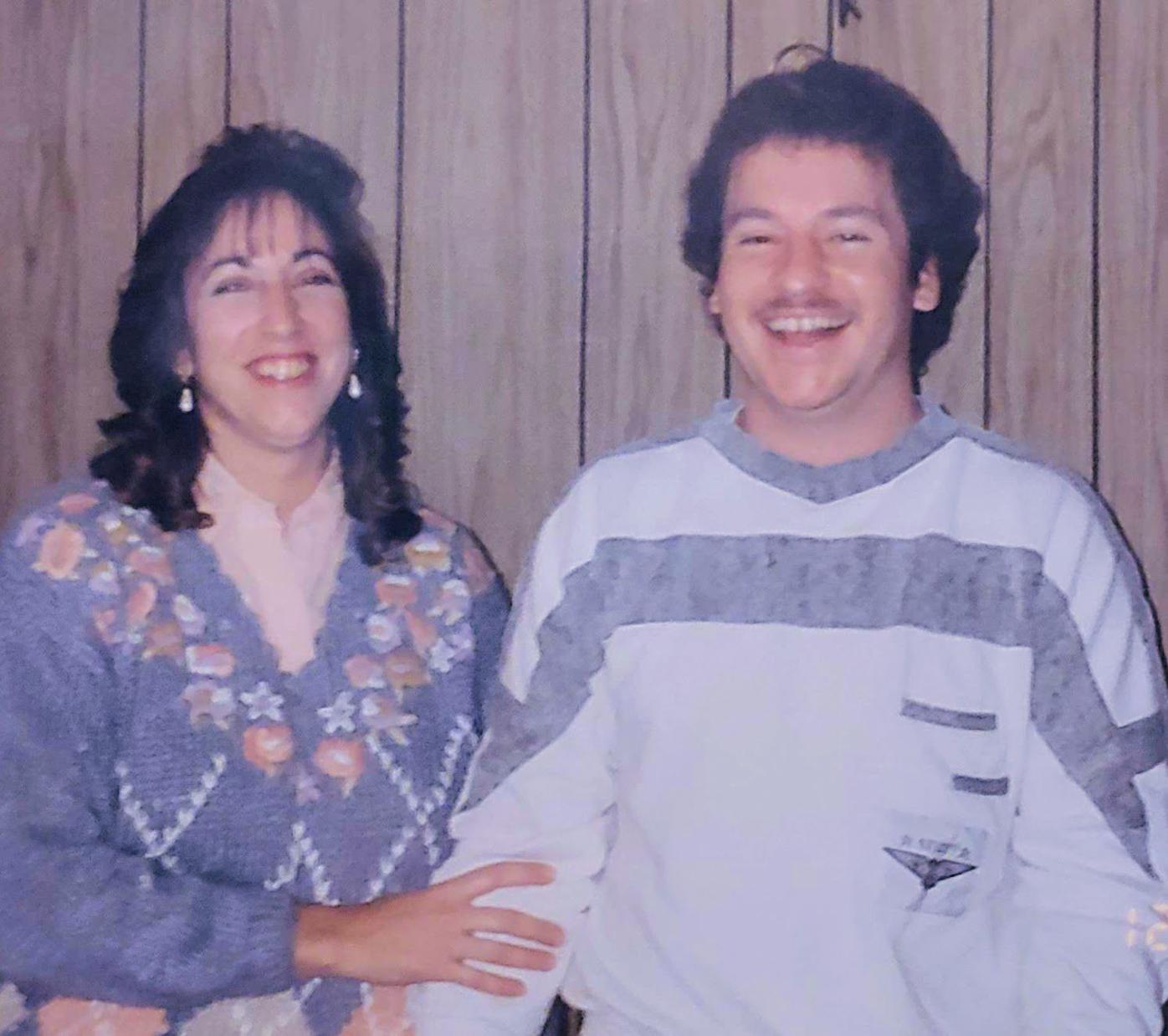 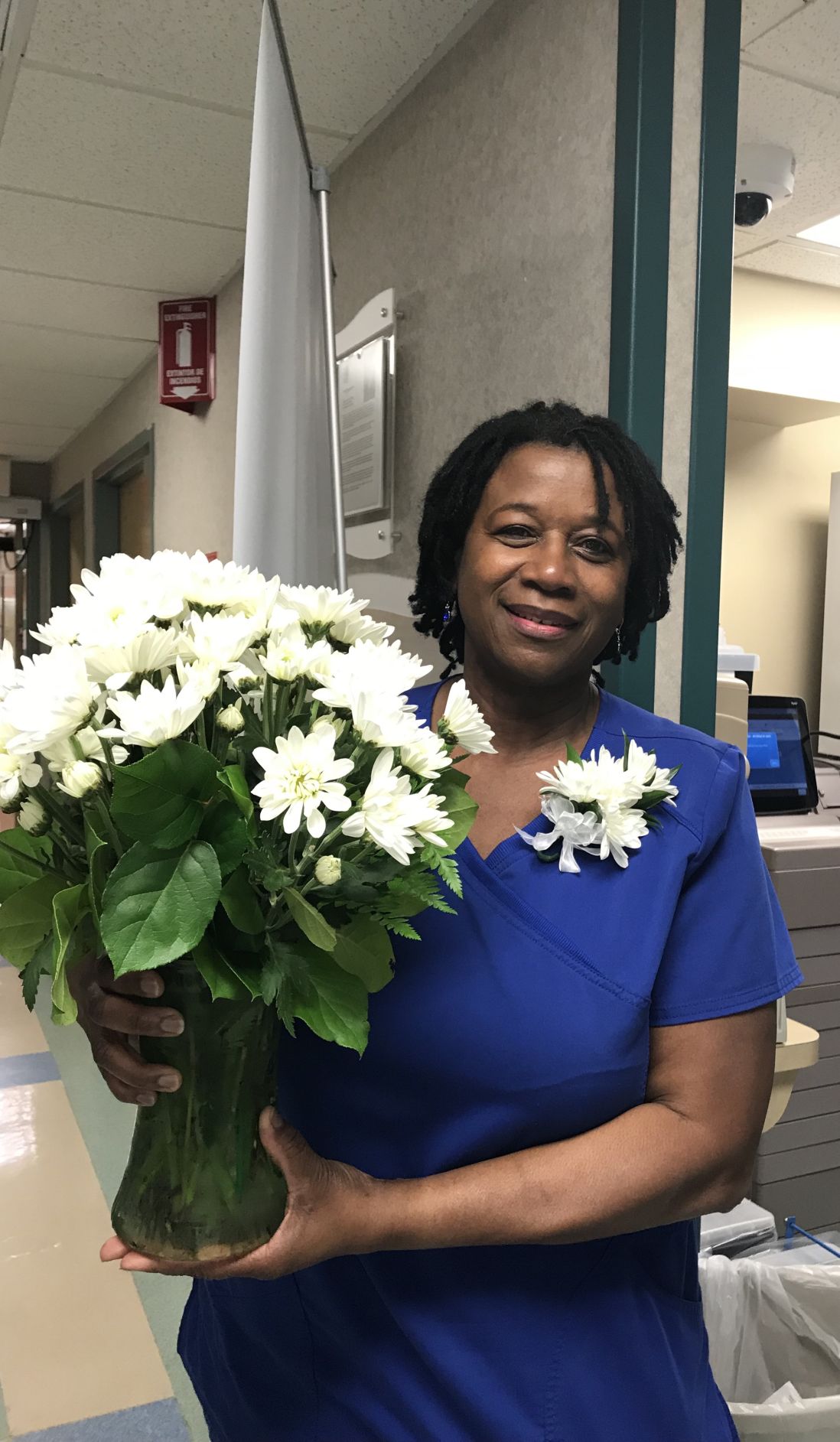 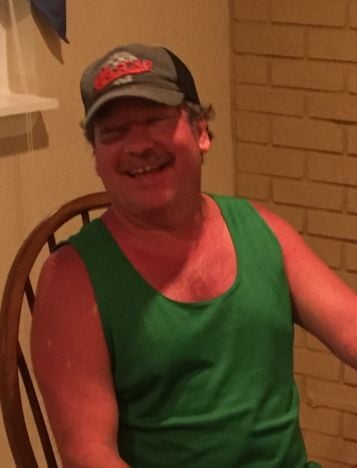 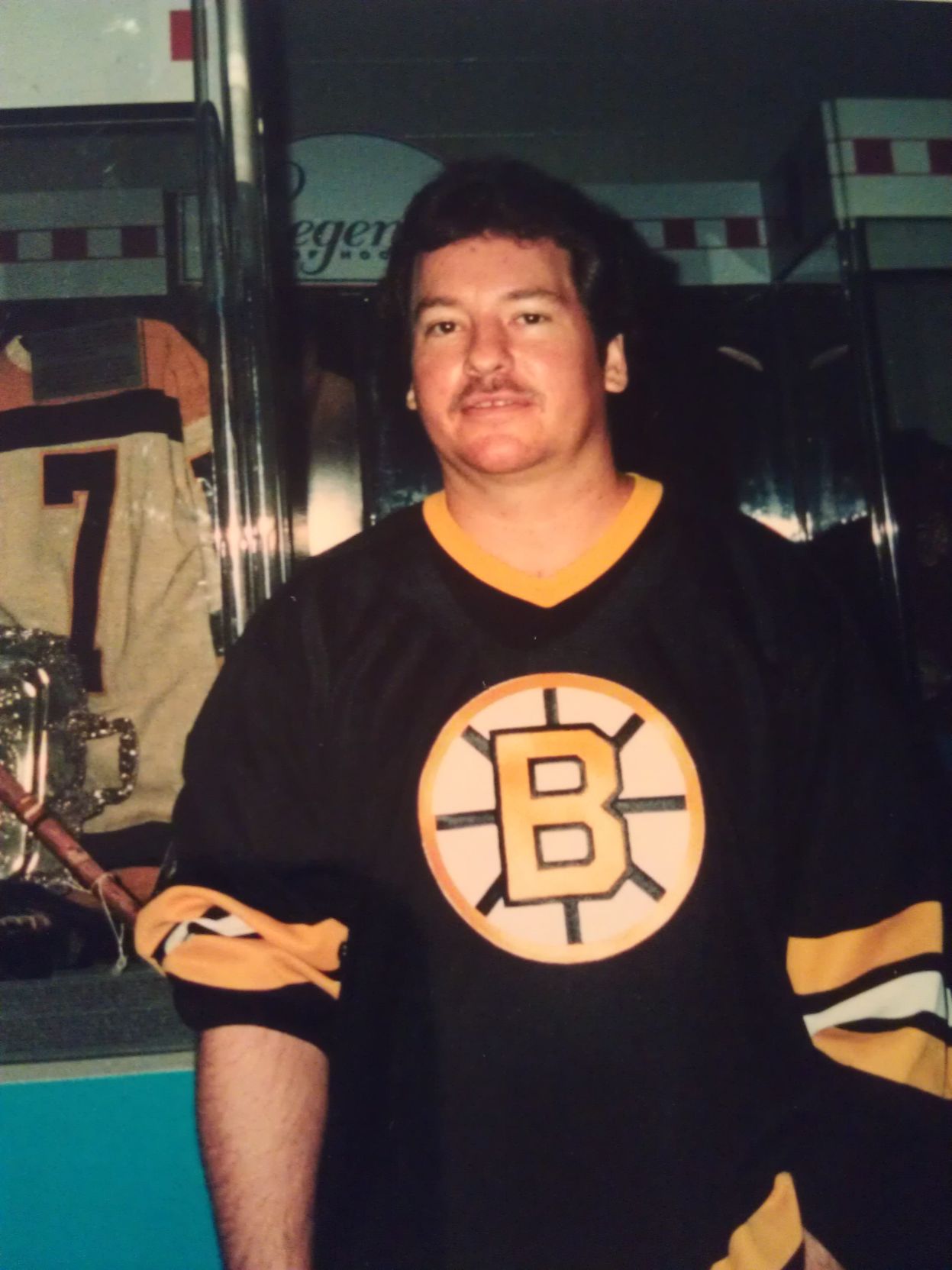 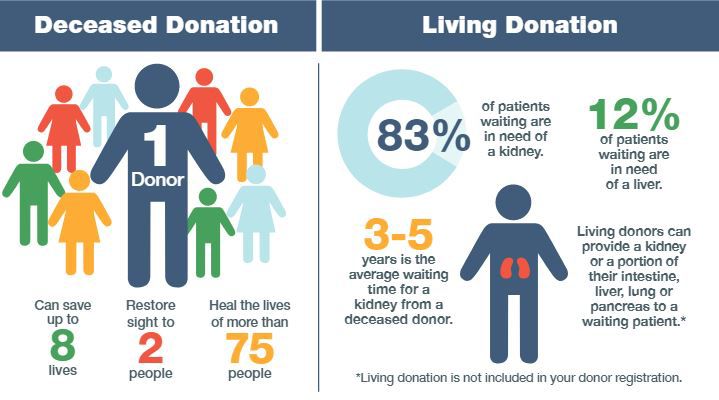 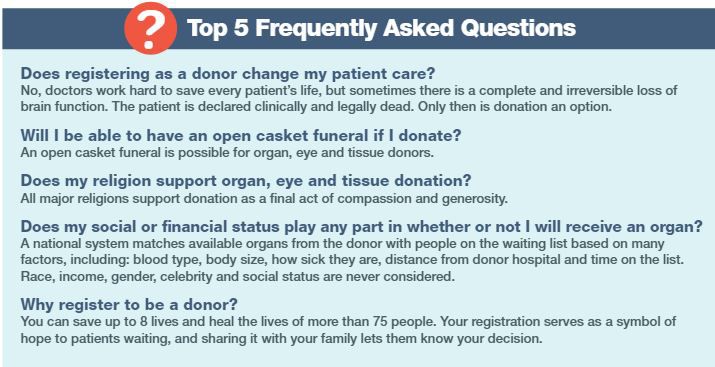 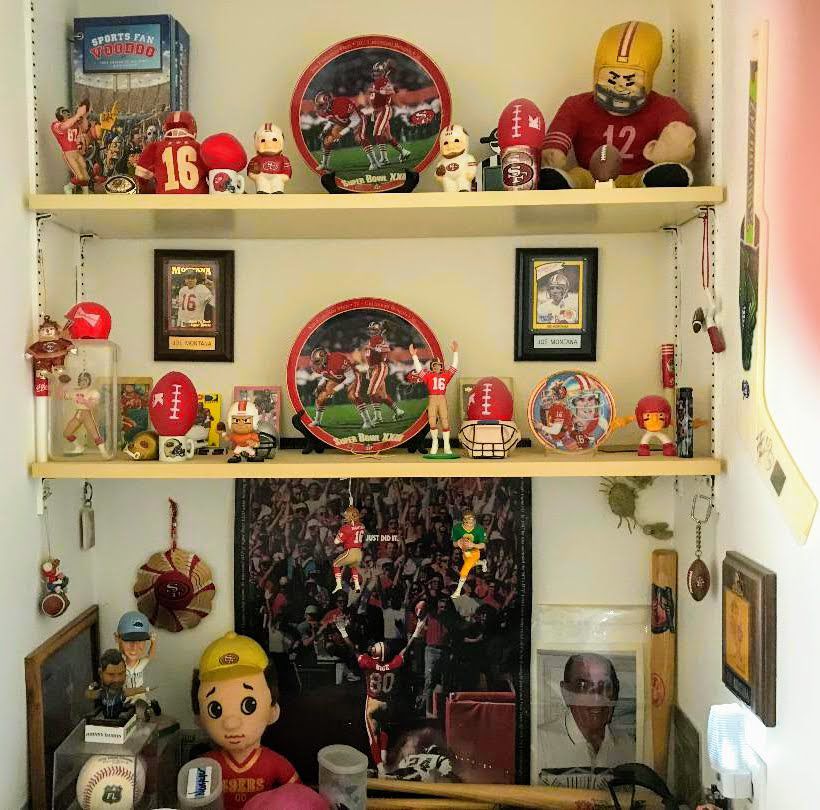 The walls of Sanderlin’s Port Charlotte home were decorated with various sports collectibles. 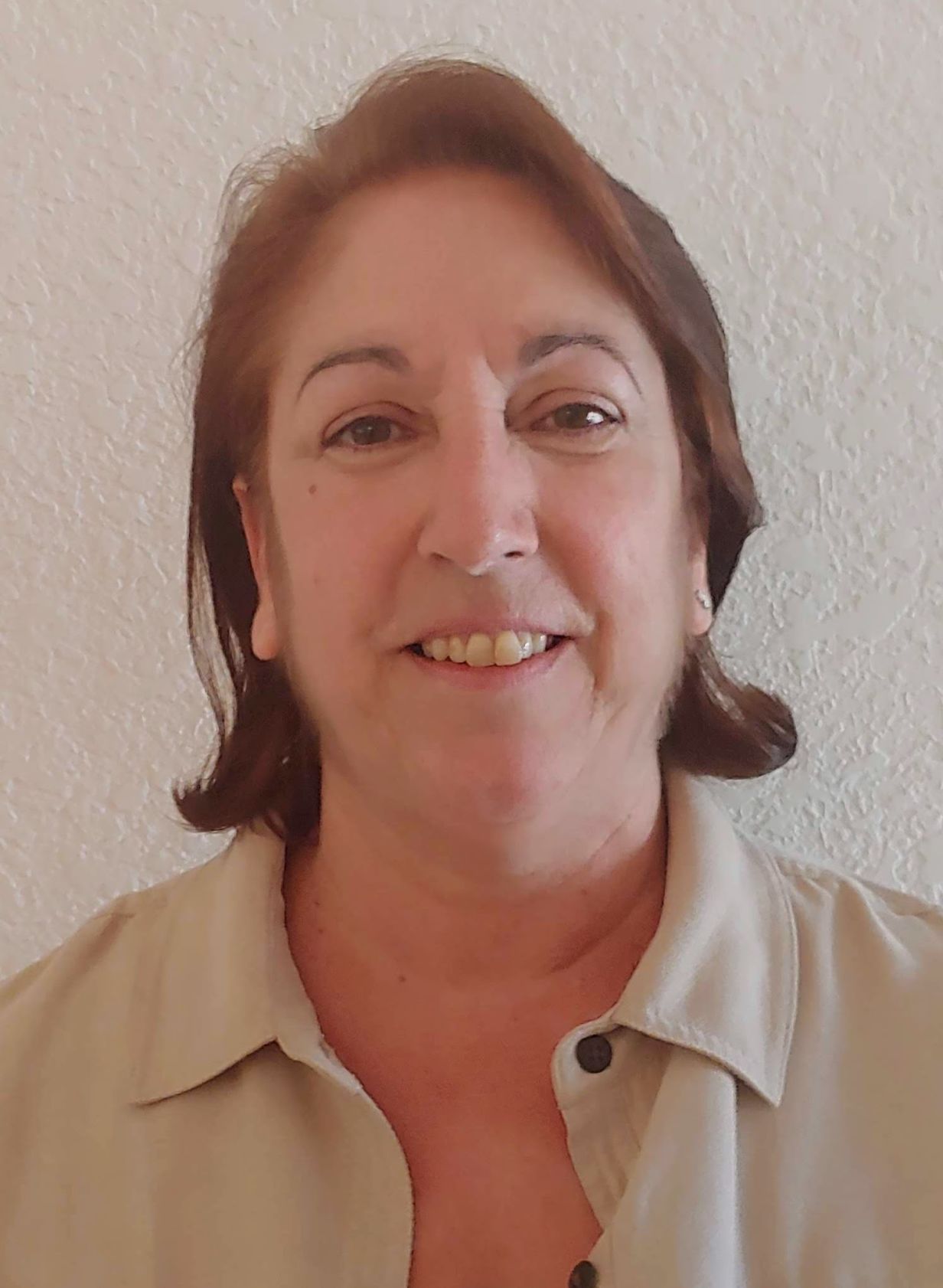 The walls of Sanderlin’s Port Charlotte home were decorated with various sports collectibles.

On the third floor of Fawcett Memorial Hospital, Lenny Sanderlin was dying.

It was unexpected and sudden.

Sanderlin, 54, had been working his usual night shift at the North Port Walmart on a Saturday. By the time he returned home Sunday morning, the day before New Year’s Eve, he decided to stay up to watch the football game. Sunday was his day to watch football.

He went to bed later that day. By 11 p.m., his partner, Sharon Carrero, found him sitting up in bed, sweating. By midnight, he was gurgling, convulsing. Carrero turned him on his side. His blood pressure spiked, sending him into a stroke. He was transported to Fawcett Memorial Hospital in Port Charlotte, where his brain swelled and he seized for an entire day.

“They tried everything,” Carrero said. The doctors declared him brain dead.

She didn’t know what to do. “You go blank,” she said. “You talk about these things, but they don’t spike your memory when you’re in grief.”

But then her sister, Denise Borrelli, suggested organ donation.

“It turns the process of grief into joy,” she said. “His life will live on in other families across the country.”

It was comforting for Carrero to know that his eyes could still watch the 49ers’ football games, while his two kidneys and liver could go to someone who needs them. “It was like he was still there.”

April is National Donate Life month, where donors like Sanderlin and many more are honored for their gifts of a second chance.

More than 113,000 people nationwide need a lifesaving organ transplant, including thousands of Floridians, with more than a third who have been waiting more than two years for an organ.

Of those Floridians, 1,849 of those candidates have a temporarily inactive kidney or pancreas.

“Without the generosity of organ donors, those waiting will die,” according to a statement from LifeLink of Florida, a nonprofit organization that recovers organs and tissues.

Organ donation, except for living kidney donation, takes place after death. With heart, kidney, lung, liver, pancreas or intestine transplants, tens of thousands of people receive these organs to continue living their life.

Who was Lenny Sanderlin?Sanderlin didn’t have a mean bone in his body, according to those who knew him well.

He was an emotional person; always hugging people, kissing them, telling them he loved them.

“The opposite of what he was brought up,” Borrelli said. “He was never like that until he came to our Italian family.”

Carrero and Sanderlin met while working in the Kmart in New Jersey 27 years ago.

He was nice looking, she said, well-mannered, not mouthy and he always brought a meal. They hit it off.

The two moved to Port Charlotte in 1996 to be near Carrero’s parents, who he would later help take care of. Sanderlin and Carrero transferred to the Kmart in Port Charlotte, and worked night shifts there for 20 years before that one closed down. The two then worked night shifts, 10 p.m. to 7 a.m., together at the North Port Walmart for over a year.

And Sanderlin and Carrero would work every shift together.

“He couldn’t hide anything from me,” she said.

Sometimes Sanderlin would go in the gas station to pick up lottery tickets, and come back out with flowers.

Sanderlin had always wanted a cat. He had fed the feral cats that roamed near Kmart for years. On Christmas Eve six years ago, he found a pearly white cat in the apartment complex. He told Carrero “Santa brought this cat for me.”

Their home was dominated by sports memorabilia: miniature race cars protected in glass, jerseyed bobble heads, magazine covers; most of it celebrating the 49ers. But he loved all sports.

“He’s compassionate, empathetic, and would do anything for anyone,” Borrelli said. “He was always thankful for any little, mediocre thing you did for him.”

The donation processWhen someone is considered as an organ donor, the hospital is required to contact their local non-profit organ procurement organization (OPO). For Charlotte and Sarasota counties, and most of the southwest Florida area, that is LifeLink of Florida.

Then OPO staff are sent to the hospital to evaluate if the organs are viable for donation. They also access the donor registry to see if the person was a registered donor.

If the person was registered or their next of kin opts for organ donation, the OPO shares the deceased’s medical information with the United Network for Organ Sharing to create a list of compatible recipients on the national organ transplant waiting list.

During 2018, LifeLink of Florida facilitated the recovery of 836 organs from 246 deceased organ donors throughout southwest Florida.

Organ recovery takes place in an operating room, and is done by the OPO, not hospital staff. Organs are then transported to an organ transplant center.

The closest organ transplant center is Tampa General Hospital, which has had 144 transplants so far this year, according to the Organ Procurement and Transplantation Network. Most of these transplants, 124 of them, came from deceased donors.

There are currently 992 candidates on the waiting list at Tampa General Hospital, where the transplants take place. More than half of these candidates have been waiting over a year for a lifesaving organ.

Sanderlin was one of the 10 individuals who passed away in a Sarasota County or Charlotte County-based hospital this year whose organs could be donated. As a result, 23 patients on the national organ transplant waiting list received an organ.

In 2018, there were a total of 23 people who died at hospitals in Charlotte or Sarasota counties, whose organs were donated. This resulted in 58 lives being saved, according to LifeLink of Florida.

Life after donationIn the end, Sanderlin’s kidneys and liver could be donated.

“Now that his health is restored, he is looking forward to making the most of his life without the constraints of dialysis,” a letter Carrero received from Lifelink of Florida stated.

Sanderlin’s left kidney went to a 64-year-old woman who received the transplant for polycystic kidney disease. His pancreas was also donated to research pharmaceutical treatments for diabetes.

“I’m comforted by the fact that he’s in someone else, living along and with their family,” Carrero said.

She does feel Sanderlin’s absence, though. Mainly when she goes to her bed, or the first few weeks when his dresser remained untouched, still housing his keys and his wallet. “It’s not really sunk in,” Carrero said. “It’s empty.”

She described the highs and lows of Sanderlin’s death like a pogo stick. “I feel dizzy,” she said. One minute, she feels sorry for herself, but the whole other side is hopeful. “(Recipients of Sanderlin’s organs will) get to see their future daughter-in-law, son-in-law, grandchildren; they’ll have more Christmases together.”

“I lost mine on New Years. Their New Years is going to be a whole, bright future.”

“He was always a hero to me, and our family,” she said. “And now it gives me such peace and comfort that Lenny has become a hero to other families.”

How to become an organ donor

Registration on the online registry at www.DonateLifeFlorida.org allows residents to designate themselves as organ, tissue and eye donors.

You can also become an organ donor during a driver license transaction while at the tax collector office.

There are currently 10.7 million Floridians registered as an organ donor, making it the third largest donor registry nationwide.

While Lenny Sanderlin was on life support, his partner, Sharon Carrero, was thankful for the dedication and support of one of the nurses in Fawcett Memorial Hospital's intensive care unit: Hyacinth Blake.

Once Carrero decided to donate Sanderlin's organs, Blake had to work tirelessly to keep Sanderlin's vitals up.

"She was constantly working for him, not even taking breaks, just thinking of us both," Carrero wrote in a nomination for Blake's DAISY Award, which she was awarded Tuesday.

The DAISY award recognizes "the super-human work nurses do for patients and families every day," the award's website states.

Blake even went beyond typical protocol, standing beside the family as the hospital honored Sanderlin's donation with a flag raising ceremony. She went with the surgeons to make sure the procedure went well, and gave Carrero a call once the procedure was done.

"I don't know how I would have gone through this without the care and concern of Nurse Hyacinth," she wrote.  "It was like arms around me the whole time...I know it wasn't easy for her."

"I'm comforted by the fact that he's in someone else, living along and with their family," —Sharon Carrero, on organ donation.

What a wonderful story. Thank you for helping to save others.