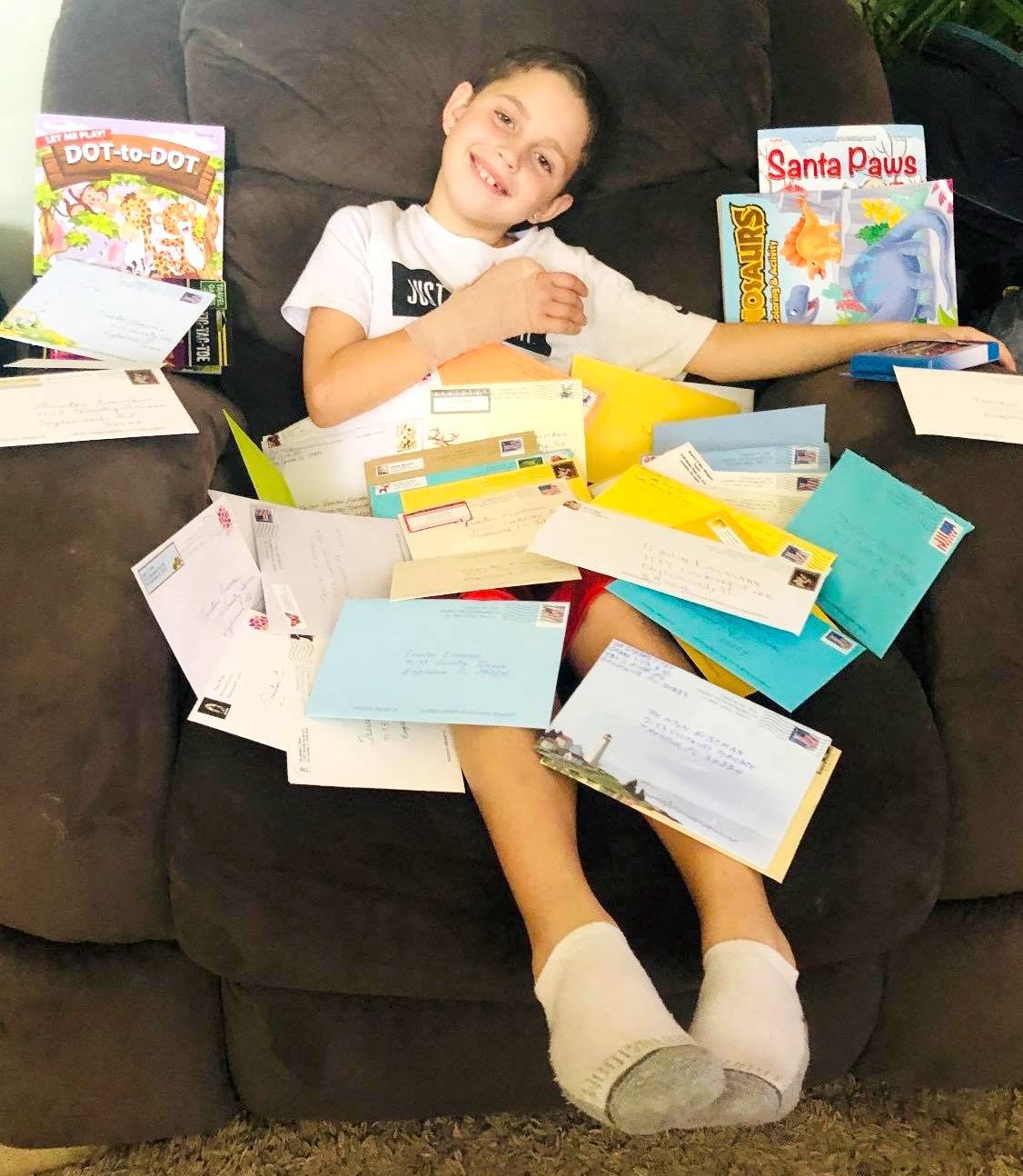 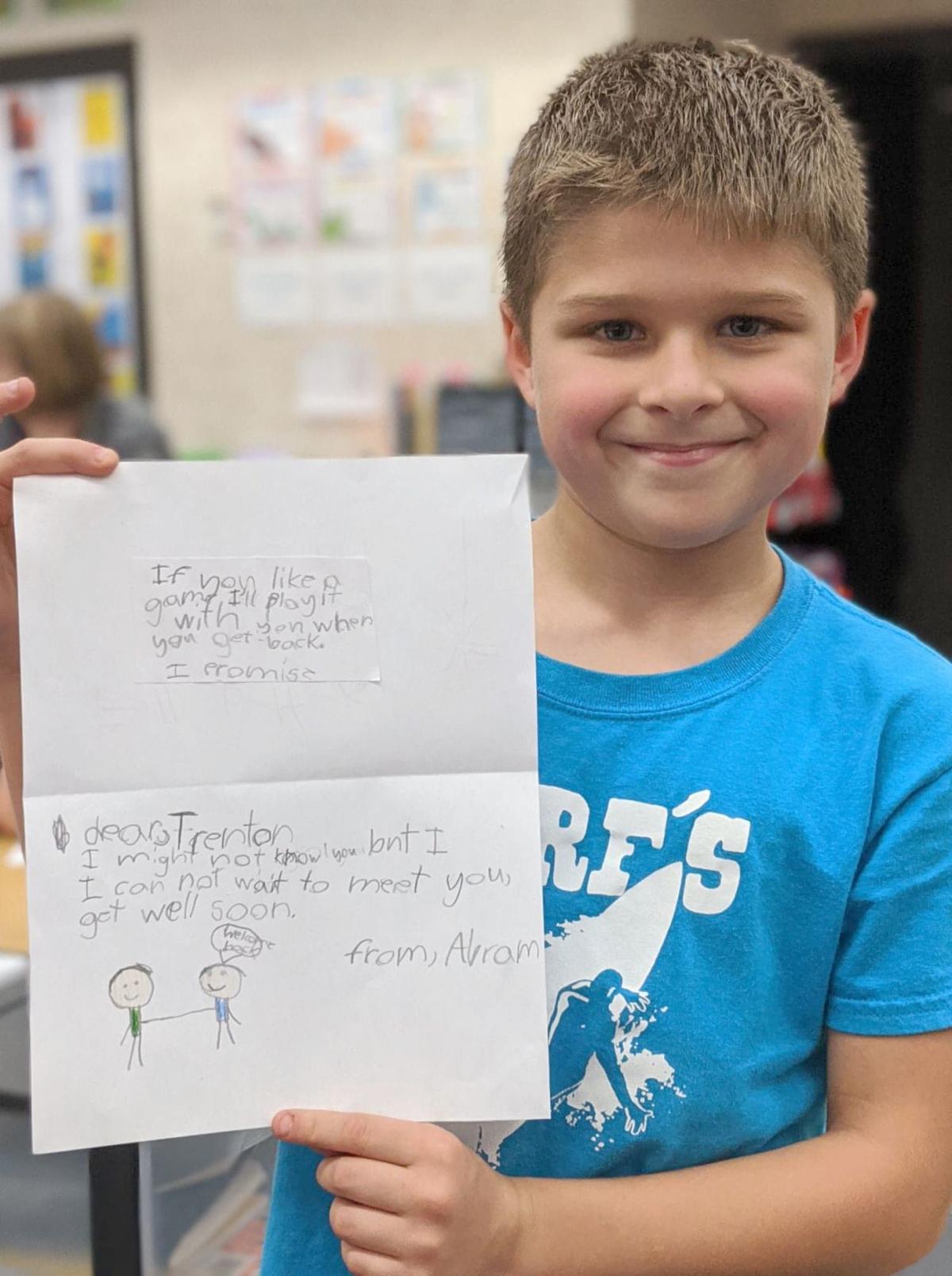 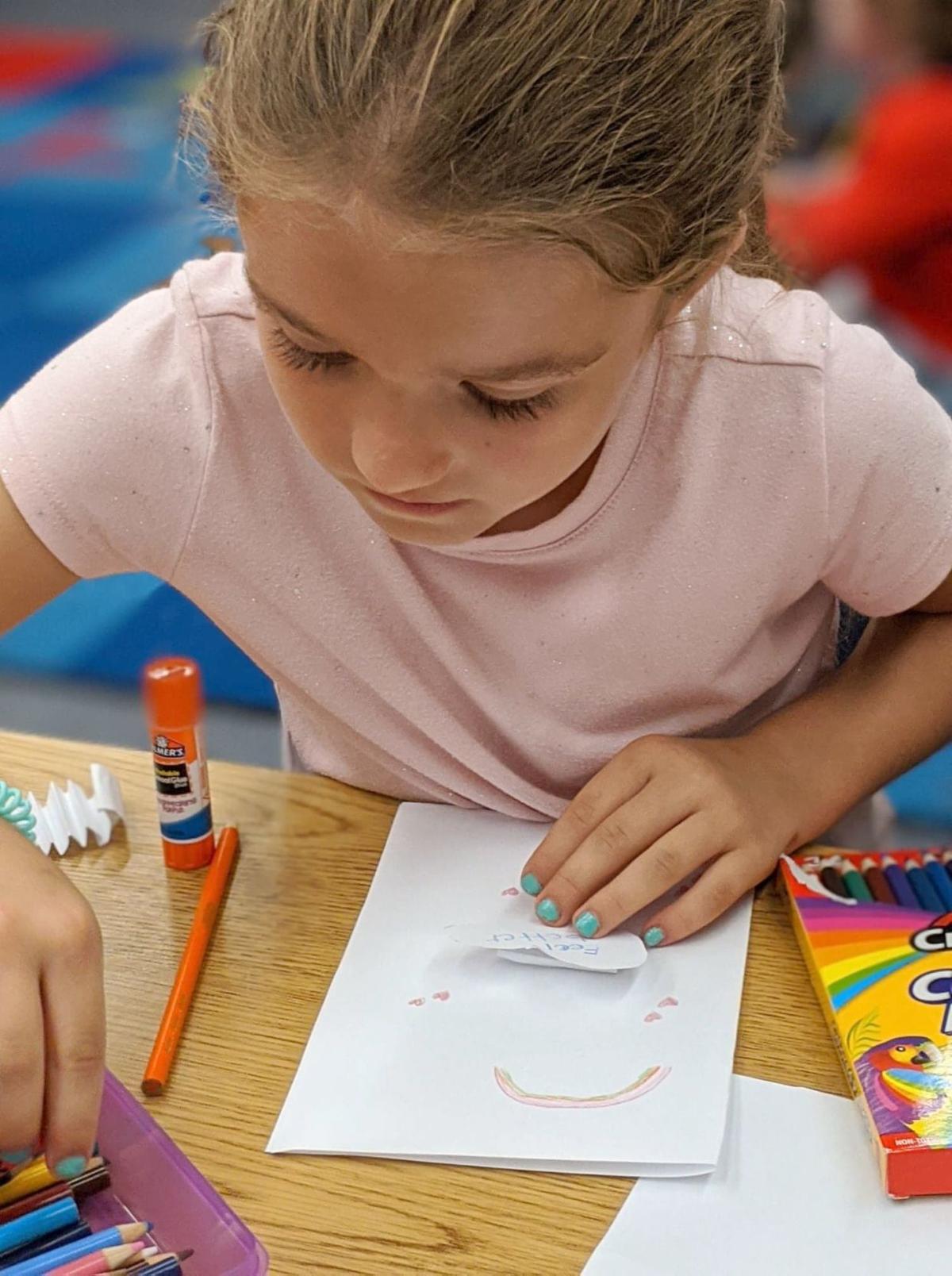 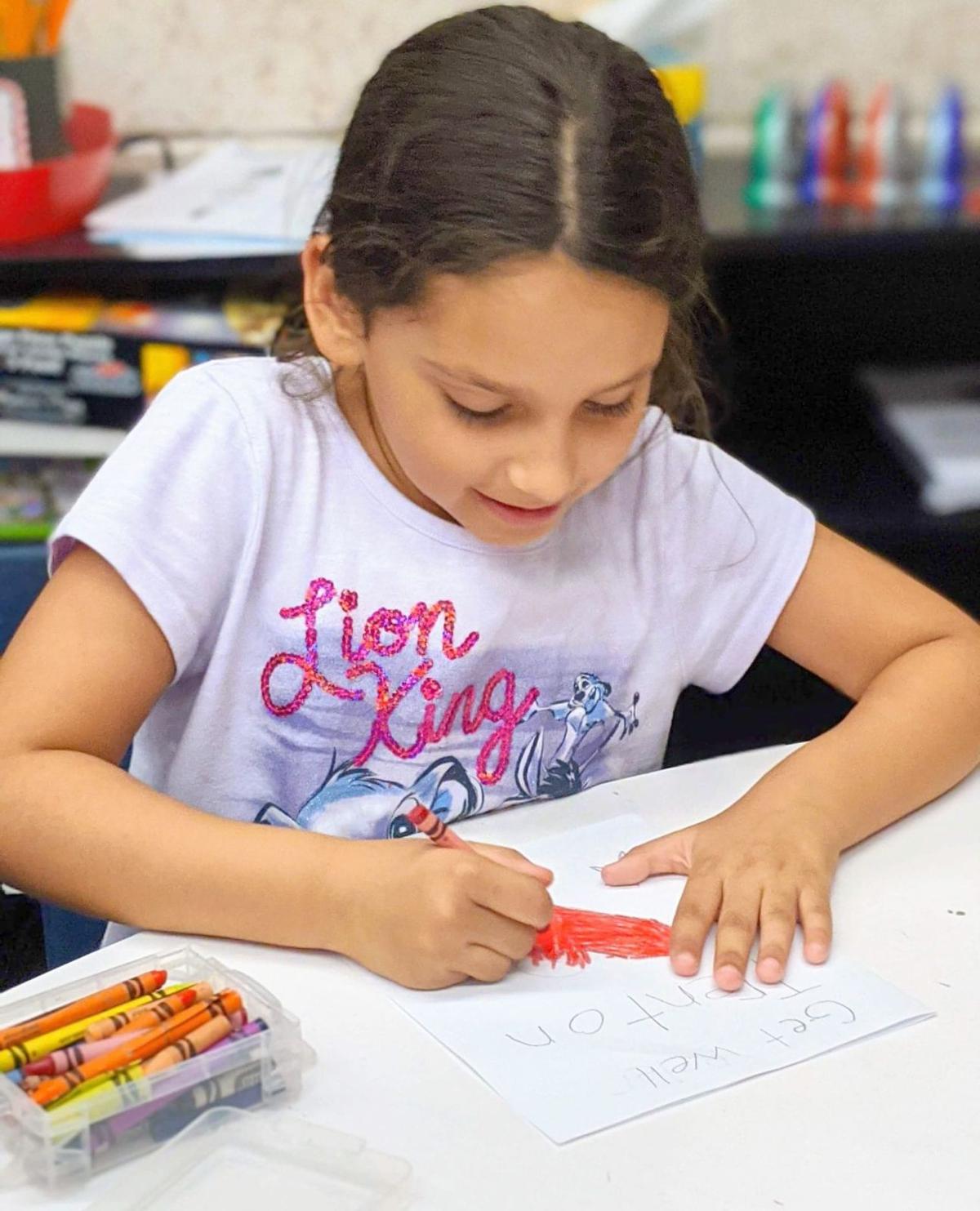 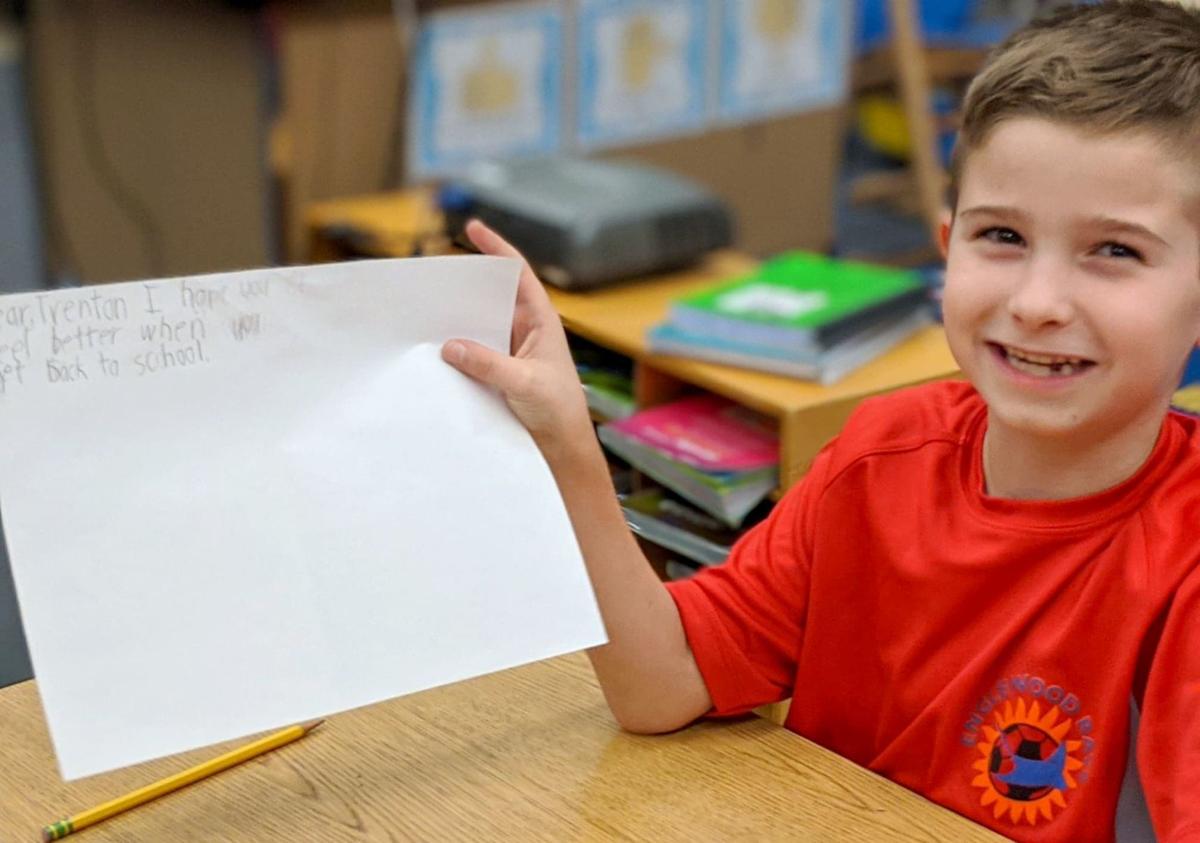 Blake Dougan, 8, proudly shows off his letter to his friend Trenton Eisemann.

Blake Dougan, 8, proudly shows off his letter to his friend Trenton Eisemann.

ENGLEWOOD — Seven-year-olds Kaliyah Smith and Shea Vazquezm have a message for their friend Trenton Eisemann.

They don’t care if he comes to school in a cast; they just want him back at Myakka River Elementary School very soon.

Trenton Eisemann, also 7, recently was flown to Tampa General Hospital after a freak trampoline accident at his Englewood home. Trenton was wearing a gold ring on his right thumb. As he jumped off the trampoline, the ring got caught on a screw. His body weight was too heavy and as as he fell, his thumb detached.

Kaliyah said even if Trenton looks a little different when he comes back to school, his friends are there for him.

Abram Lee, 7, doesn’t know Trenton, but hopes he’s not in a lot pain. Abram said it doesn’t matter how Trenton looks, he will be accepted by students.

“I hope Trenton gets well soon,” Abram said. “I don’t judge people by the color of their skin or if they are different. I judge them by their character.”

Trenton’s doctors tried to reattach his thumb. However, the procedure didn’t work. This week he underwent a revision amputation.

Eisemann said she’s a little worried that the surgeries and attempts to save her son’s thumb confused him.

“Trenton thought if they couldn’t save his thumb that it was going to grow back,” Eisemann said. “I had to explain to him that’s not how things work. But, I have not seen a grown adult be as strong as my 7-year-old boy. I’m just so proud of him.”

“Whatever he needs, we will be there to help him,” she said. “We don’t care if the whole school knows what happened. We just want our friend Trenton to come back no matter what he looks like. We miss him.”

Trenton’s mom, Brii Eisemann, has been uneasy about Trenton’s return to school. She worries how others will react and if he’ll get the same questions all day long.

“I worry about bullies,” she said. “Trenton said he wants to be a cop or even a pro football player. I wonder if this will put a damper on his dreams. There are so many factors and that’s why this is so hard, but we are moving forward.”

Friends like Shea and Kaliyah say they want Trenton to be at ease when he returns to class.

“He needs to be himself when he comes back to school,” Shea said. “He has been a great friend to me.”

On Wednesday second-grade students in Cindy Atherholt and Cheryl Whelden’s class worked together making get-well cards. Some students wrote Trenton letters and others made pop-up cards.

“The students at Myakka River Elementary are so conscious and caring, it doesn’t matter if they know Trenton or not, they wanted to make him cards,” Atherholt said.

Between surgeries, Trenton read some of the cards.

“We have known Trenton since kindergarten,” said Kaliyah and Shea.

Kendra Porter, a family friend, helped raise money for some of Eisemann’s bills. She recently loaned her friend a metal detector to help find the ring, which was lost at the time of the accident.

“Trenton was wearing his great-grandmother’s wedding band on his thumb,” Porter said. “We used the metal detector and found the ring in the yard. It wasn’t broken, but was badly bent. I’m going to take it to my jeweler and have it fixed and give it back to him on a chain so he can still wear it.”

“Trenton is one of the kindest young souls I have come across,” Porter said. “The family is so thankful for all of the support and prayers. I’d love to see him get hundreds of more cards. He’s received some from out of state and other areas of Florida. The cards keep him in a good mood.”

“He just loves them,” she said. “I can’t thank everyone enough.”

Trenton said his message to his friends is “never wear jewelry while playing because accidents happen.”