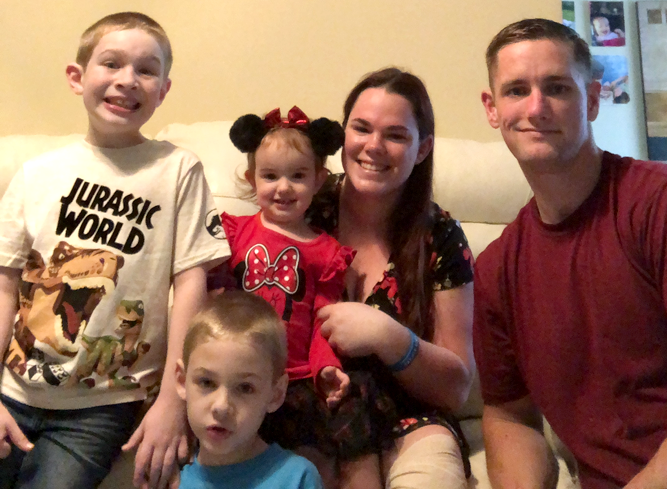 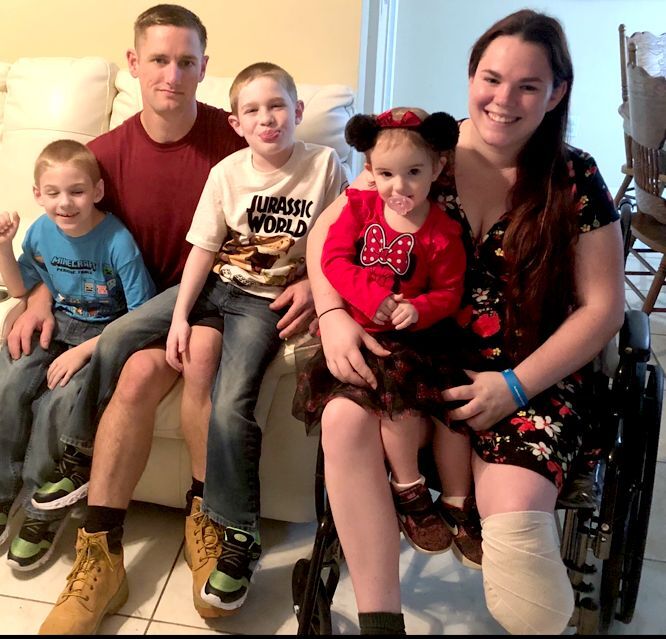 PORT CHARLOTTE — When Cortney Egan broke her left leg in an ATV crash at the age of 18, she didn’t realize it would lead to an amputation 12 years later.

“I thought I was invincible back then, like most 18-year-olds,” Egan said, “but it’s been one nightmare after another since.”

Egan, 30, a wife and mother of three, had to have her leg amputated below the knee in December after years of surgeries, an ankle implant and other complications.

Despite some apprehension, the Port Charlotte family recently started a GoFundMe page — with a $4,000 goal — to ask the community for help, hoping to get through the next several months without becoming homeless.

“We were scared and nervous, even uncomfortable, to put ourselves out there,” Cortney said. “We thought that maybe we could maneuver through this and we could figure something out and I could still handle the kids, but I’ve discovered now that it’s just not possible.”

Since the amputation, Cortney’s husband Brian has had to leave work to take care of her, their 2-year-old daughter and their two autistic sons, 9 and 7.

“The bills were already starting to pile up before my surgery,” she continued, “and now our truck needs repairs (around $500). We desperately need help getting our much-needed vehicle back for upcoming medical appointments, as well as for our children and to help us get our rent and other bills back to ‘current’ status.”

A long road ahead

In the coming weeks, Cortney has multiple appointments with her surgeon in Sarasota. One will involve the removal of 46 staples.

“I can’t even get a stump shrinker until after my staples come out and everything closes up and heals, otherwise you risk infection,” she said.

A stump shrinker is used to reduce and control swelling of a limb after amputation.

“I can’t even get fitted for a prosthetic until I’m in a shrinker for a little because they really need to get the swelling down,” Cortney said. “We’re looking at probably six months before I’m even on my first prosthetic, which means at least six months before Brian can go back to work.

“And that’s being optimistic.”

The amputation was the latest “solution” in a series of problems since the ATV accident.

After the initial break, Cortney said she fell while not wearing the boot she was prescribed, re-breaking her leg and shattering her ankle.

“A specialist informed me that I had I shattered my ankle and re-broke my leg in two places,” Cortney wrote on her GoFundMe page. “Healing had begun (after I let it go for months because of a lack of health care) but the bones healed in the wrong position.”

Cortney spent a couple months trying to correct things without surgery but eventually gave into the pain.

“My first surgery was a reconstruction with cadaver bone; it didn’t work,” Cortney wrote. “I still couldn’t walk or bear weight.”

Six years then passed since the original injury and she decided to go to another ankle specialist who told her she had chronic neuropathy, arthritis and damage to the ankle and leg bones.

The specialist told her an ankle implant surgery would bring back 90% of mobility in her ankle, along with physical therapy to walk properly again. The implant became infected and her mobility never changed.

Finally, in 2020, doctors told her the best option to get back to a somewhat normal life was amputation.

“I agreed, as well as two other physicians,” Cortney said. The amputation was done Dec. 16.

While they have received some help from local churches with meals and other aid, rent and house bills, vehicle problems, hospital bills, cost of needs for her and their autistic children — and more — continue to set them back.

“It’s scary and it’s hard,” Cortney said. “We’re scared that we’re going to end up getting evicted or end up homeless if we can’t come up with rent.

“We’re cutting all unnecessary costs, we’re going to food banks, we’re trying to utilize what assistance we can from the government but we keep getting told disability and unemployment are backed up so we just can’t count on that right now.”

Despite everything, Cortney and Brian are staying positive for each other and their children.

“There’s definitely been challenging days,” Cortney said. “Brian has been my rock through a lot of this. My kids are a major reason why we just keep putting one foot in front of another.”

“We don’t have much family support beyond ourselves,” she continued. “If our kids don’t have us, they don’t have anybody so that’s definitely what keeps us going ... our family.”

Donations can be made through GoFundMe.com and searching Cortney Egan or through the link, bit.ly/2LpDoud.