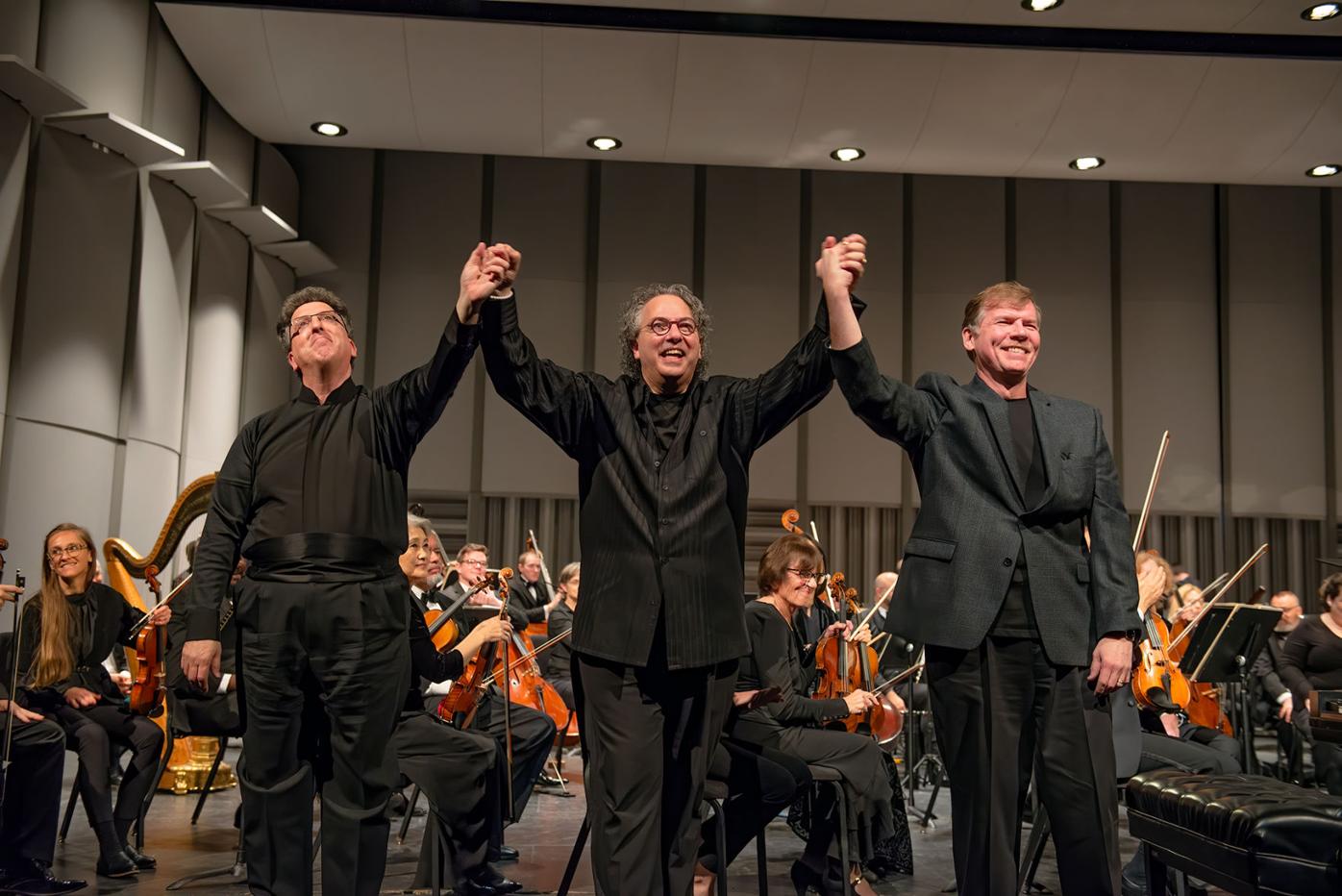 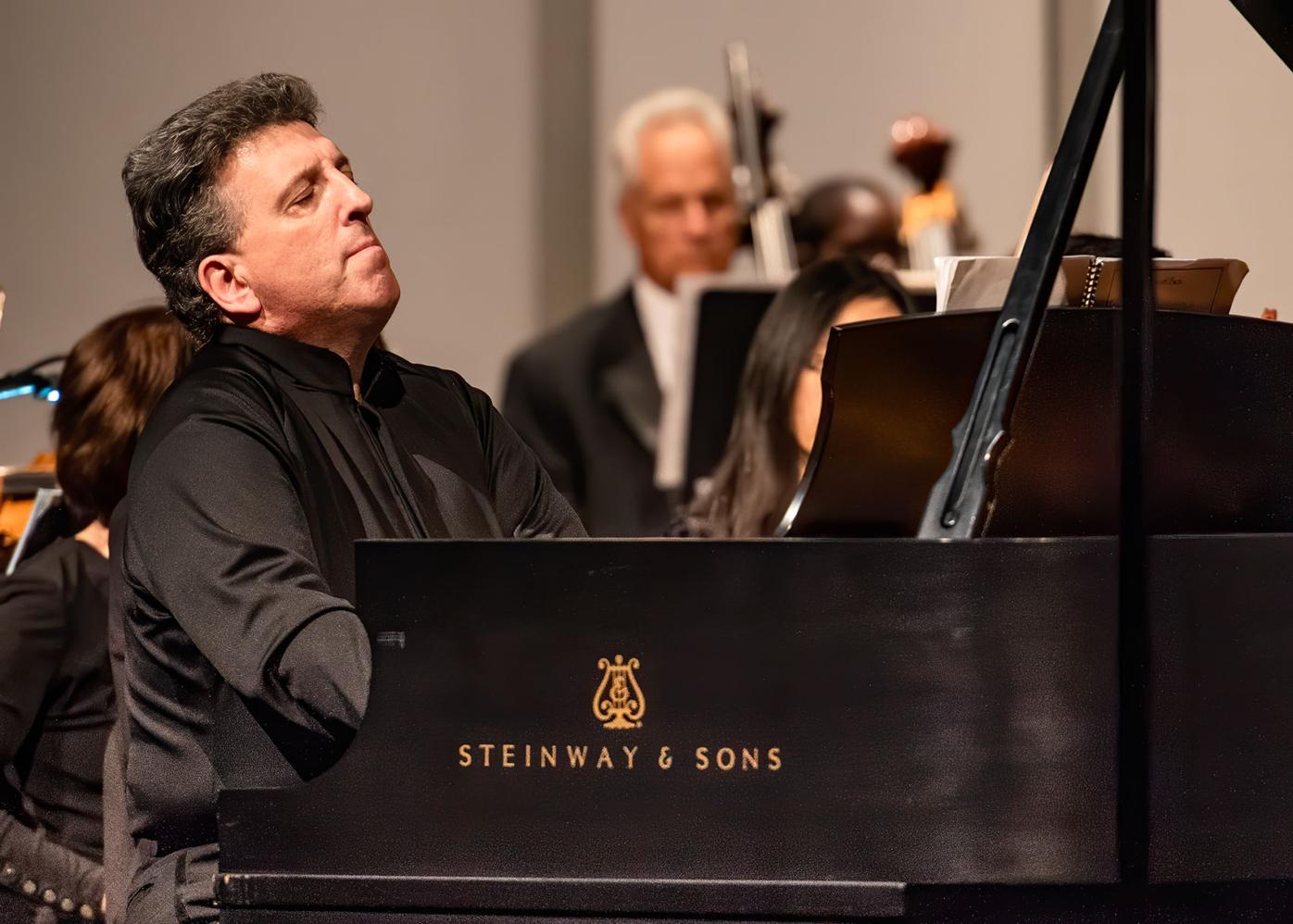 Pianist Jeffrey Biegel performs at the Charlotte Performing Arts Center in Punta Gorda. This concert was held before the coronavirus caused many cancellations.

Pianist Jeffrey Biegel performs at the Charlotte Performing Arts Center in Punta Gorda. This concert was held before the coronavirus caused many cancellations.

The Punta Gorda Symphony’s recent season finale provided a virtuoso classical repertoire, from a stunning Dvorak symphony, to a masterful performance by world renowned pianist Jeffrey Biegel, to a resounding, festive salute to the Bolshevik Revolution.

The audience at the Charlotte Performing Arts Center in Punta Gorda was long and loud in applauding the orchestra’s symphonic diversification.

The evening opened with Antonin Dvorak’s “Symphony No. 9 in E minor, Op. 95” (From the New World) featuring the Czech composers solute to African-American and Native American music after he immigrated to the United States in 1892.

The piece was commissioned by the New York Philharmonic and premiered in 1893 at Carnegie Hall.

It was a swift, upbeat performance from the beginning, transferring in tempo to a lively and fast molto vivace to a fiery con fuoco combination of force and speed, with every section of the orchestra communicating flawlessly with each other — weaving among the groups of instruments, conversing back and forth — during the hour-long presentation.

After intermission, it was internationally acclaimed pianist Jeffrey Biegel’s turn to enthrall the audience as he played American composer Kenneth Fuchs’ piano concerto “Spiritualist,” which last month won a Grammy Award — in the Best Classical Compendium category, as recorded by the London Symphony Orchestra, featuring Biegle as its pianist.

It’s based on three paintings by Helen Frankenthaler, “Spiritualist,” “Silent Wish,” and “Natural Answer.” Fuchs told a pre-concert audience that he was “captivated” by the beauty, silent images, the quality of expression — and a “sense of wistfulness” — in her work.

It represented to him “a silent wish, a natural answer” to celebrating life. And he said he had long intended to using three of her “gorgeous canvasses “as a basis for a musical journey in a piano concerto.

“Taken together,” he said, “their titles make a logical progression, visually, emotionally, and musically.”

Also, he said, “I am grateful to my long-time friend and Julliard classmate Jeffrey Biegel for encouraging me, and his musical consultation, to compose the work.”

Then, Biegel, at the keyboard, made it all come so very alive, with Maestro Raffaele Ponti’s direction and the orchestra’s quite visual enthusiasm.

It was stunning. Art and life, via piano. There was the symphony’s communicative background — at times whispering strings to augment, but never to overcome, the virtuoso power of the piano played by Biegel. As his fingers glided — easily then emphatically, among the keys, his body language alone almost transfixed the audience. The reaction was tumultuous.

But Ponti, and the orchestra, weren’t done yet. As a final measure, so to speak, then came the Bolshevik October Revolution, as immortalized Dmitry Shostakovich’s “Festive Overture, Op. 26,” written in 1947 to mark the 30th anniversary of the revolution, which was responsible for the creation of the Soviet Union.

Festive it was, indeed! Bing, bam, bang, classical fortissimo, ever rising in tempo — cymbals clashing, brass booming, timpani pounding, strings singing on high — a classical orchestra having its own symphonic fun, courtesy of Shostakovich, and Ponti.

Although it wasn’t yet the end of the concert, it took Ponti a long time to get the beaming orchestra reorganized, and the audience back in their seats, for the evening’s finale, as the standing ovations continued.

“You,” said Ponti, with a big smile, “have just heard the London Symphony Orchestra in Punta Gorda.”

For Biegel, it was a seven-year reprise, after appearing in November 2013 with Ponti’s initial concert as the new maestro of the then Charlotte Symphony Orchestra. He replaced Maestro Francis Wada, who retired. Biegel played Gershwin’s “Rhapsody in Blue.”

In a post-concert interview with the Sun Sunday, he marveled at the orchestra today under Ponti. “They are like a family. They function as one. They listen to each other. Ponti is charismatic, inspirational, (has) positive energy, (and is) encouraging.”

But he revealed in the interview that although he has now achieved international claim, up until three years old, he was deaf. “I could hear hardly anything,” he said, except vibrations, particularly from music.

He had myringotomy surgery, at age 3, to insert tubes in his ears to relieve pressure caused by excessive fluid buildup, and to prevent future pressure.

Among his first sounds, he said, were music, and that helped him define his career. His mission today, he said, is to provide new expressions in music repertoire. Since 1999, he has commissioned 10 composers to bring new expressions of music to the world.