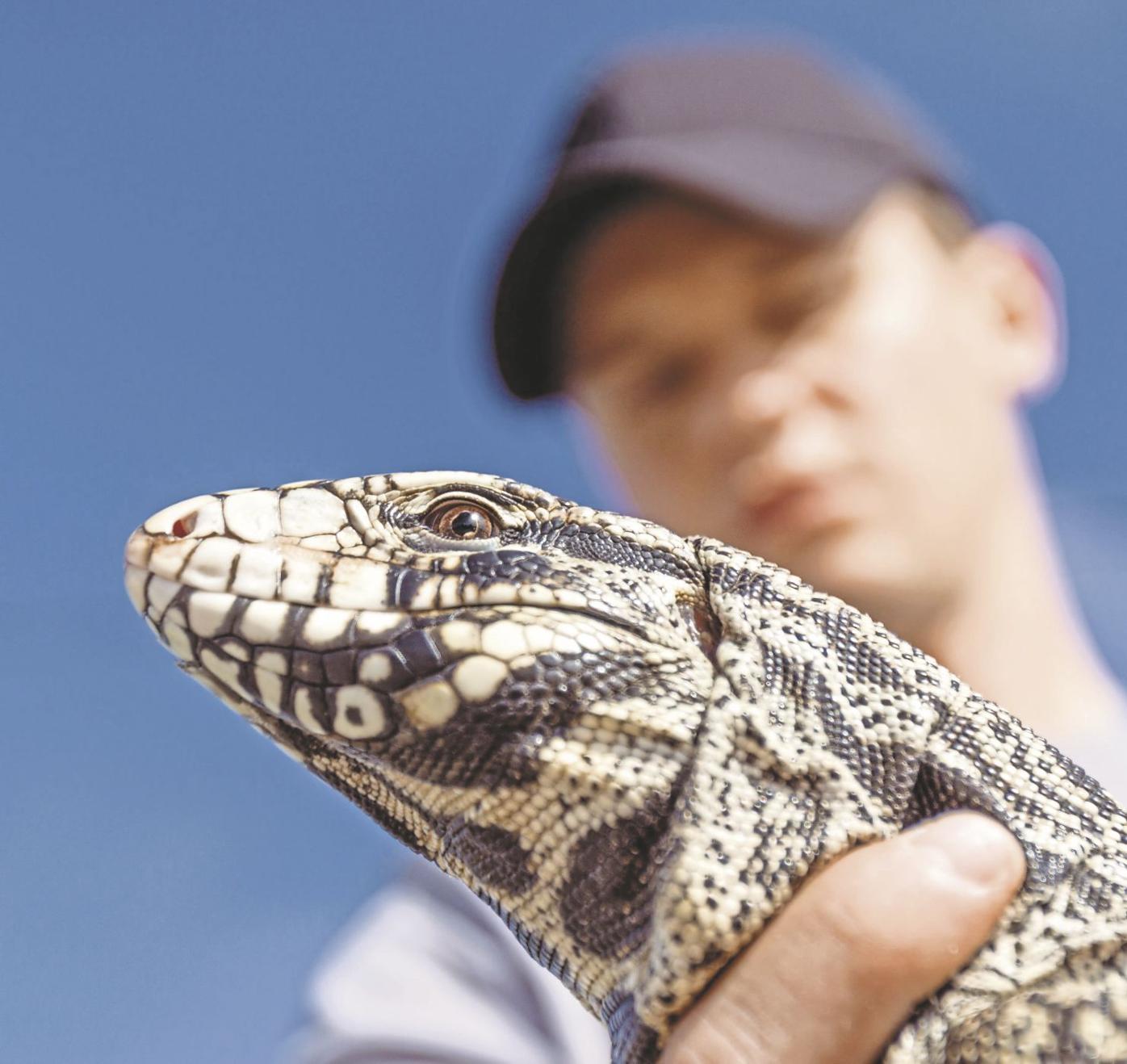 Andrew Merriman holds a tegu caught at the Promanades Mall in Port Charlotte several years ago. 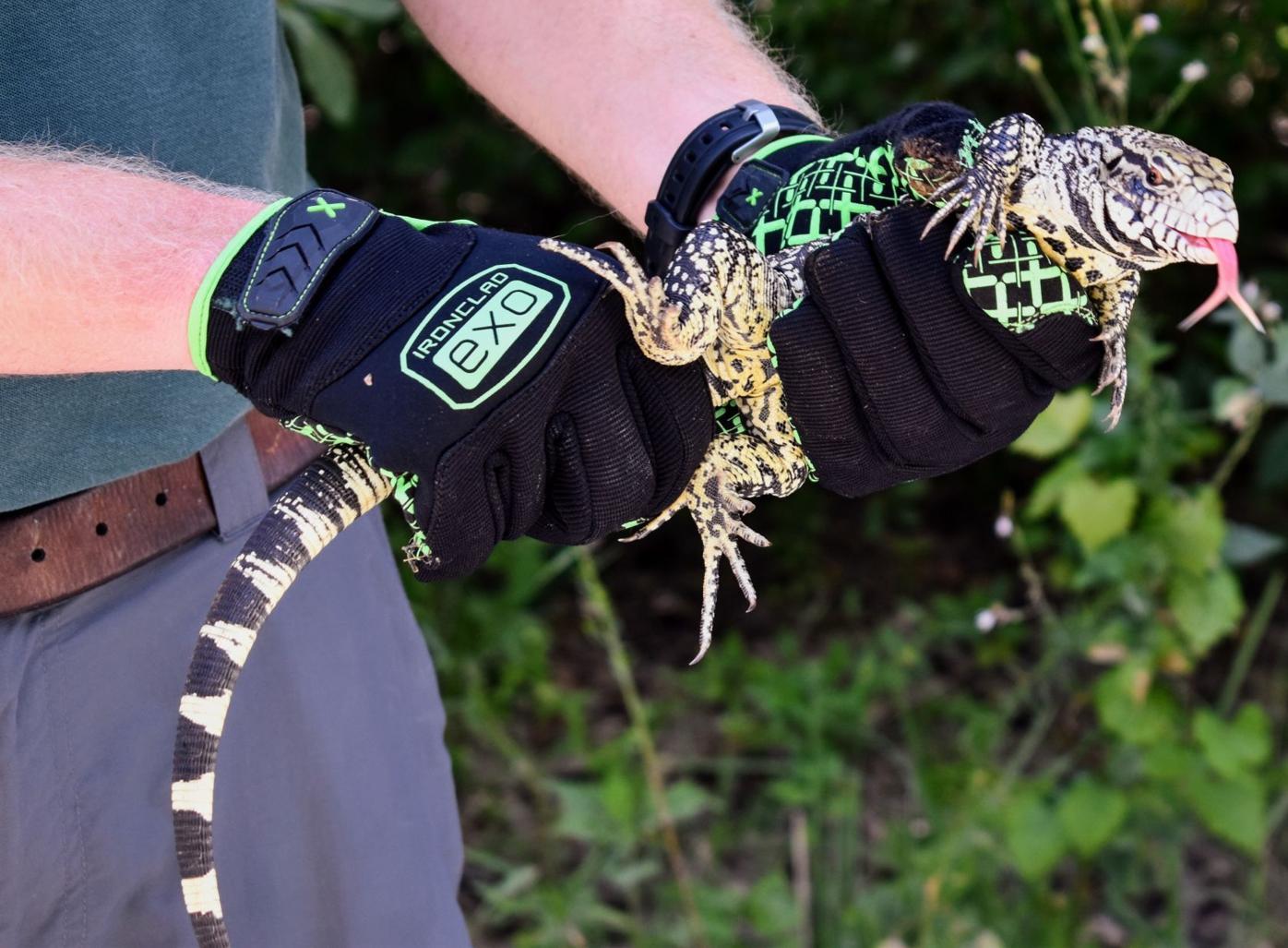 This was the first tegu the FWC caught once they started their trapping program. Though tegus can achieve reproductive maturity by 2 years, the tegu can grow up to 4 feet long once it hits 5 years old.

Andrew Merriman holds a tegu caught at the Promanades Mall in Port Charlotte several years ago.

This was the first tegu the FWC caught once they started their trapping program. Though tegus can achieve reproductive maturity by 2 years, the tegu can grow up to 4 feet long once it hits 5 years old.

Florida reptile lovers are gearing up for more wrangling with state regulators over the rights of reptile breeders handling invasive species.

The state’s latest attempt to control animals from the Burmese python to the green iguana hit a roadblock in September. That’s when a reptile keeper advocacy group managed to get new legislation thrown out as unconstitutional.

The state Legislature had passed a law this summer adding tegus and green iguanas to the list of banned species, meaning people could not own them except for education, research and eradication. Breeders who were already licensed were exempted and allowed to sell out of state only.

U.S. Association of Reptile Keepers (USARK) argued the new law was unconstitutional — Florida’s constitution, not the U.S. constitution. The state constitution says the Legislature cannot pass laws that usurp the authority of the state’s Fish and Wildlife Commission.

A Florida judge agreed and ordered the state to rescind the legislation.

To the relief of environmental advocates who fear for the destruction of native wildlife, the state’s Fish and Wildlife Conservation Commission responded by proposing to expand its own regulations with similar restrictions. It also added a lot more detail on how to keep these animals from escaping into the wild. After a lot of debate, FWC published draft regulations, which the commission may take up at its Feb. 19 virtual meeting.

State regulators met during the fall with reptile advocates and other members of the public to ask their opinion of the proposed regulations, said Heather Hale, a Tampa-based reptile rehabilitator and exhibitor.

Reptile fans have been angry that the state is considering abandoning its Conditional Species Permit program, which allows people to own these invasive species under permit.

“The CSP program has been proven successful, so removing it, as these laws do, is simply punishing responsible owners,” she told The Daily Sun.

FWC has agreed to some adjustments to their proposed regulations, she said.

Private ownership of banned species, however, will be illegal for anyone not already licensed as a breeder or researcher. And any in-state sales are banned.

Environmental advocates are also weighing in. They favor bans, because escaped species have wreaked havoc on the state’s wild ecosystems. For example, the Burmese python has reportedly consumed 90% of mammals in the Florida Everglades. Tegus, seen frequently in Eastern Charlotte County, grow up to 4 feet and eat alligator eggs.

The draft regulations add detailed requirements that reveal the apparent ease of escape for these animals. The regulations describe electronic tagging procedures and indoor cage requirements of one-eighth inch plate glass or reinforced concrete. Hurricanes have proven to be the biggest problem for Florida and invasive reptiles.

So the regulations state that 24 hours prior to the “onset of hurricane force winds,” owners of prohibited species must put each animal in a “closely woven, double-seam sewn cloth sack” inside another “closely woven, double-sewn sewn cloth sack”, both of which go into a “secure, locked container.” And reptile keepers must report their preparedness to the state prior to the storm.

Hale said she is concerned that the draft regulations still require people who find an invasive, such as a tegu, to kill it or give it to the state to be killed. Instead, she said, people should be able to bring it to exhibitors or breeders like herself who will care for the animal safely.